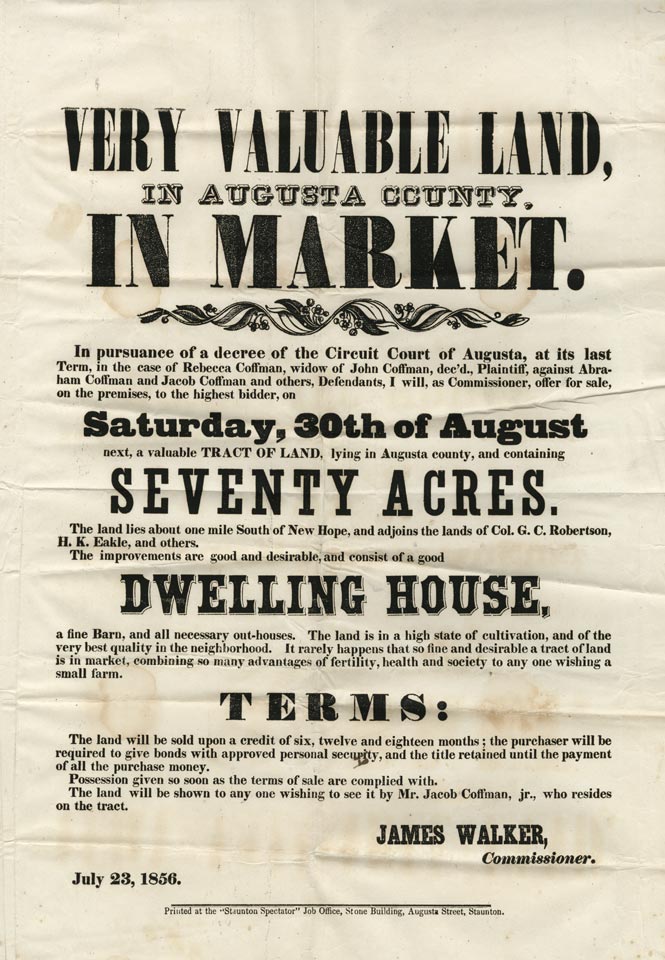 The Library of Virginia’s Local Records Services Branch was recently awarded a $150,000 grant from the National Historical Publications and Records Commission (NHPRC) to support the scanning of the Augusta County Chancery Causes dating from 1745 to 1912.  NHPRC, the grant funding arm of the National Archives and Records Administration (NARA), recognized the national significance of the Augusta County collection and validated the importance of and great benefits provided by LVA’s ongoing digital chancery initiative.

Chancery causes are invaluable to family historians and those interested in studying the history of a locality or region and its inhabitants. Chancery causes are legal proceedings that could not be decided readily by existing written laws. Decisions were made by a county justice or judge, not a jury, and on the basis of fairness, or equity, in place of the strictly formulated rules of common law. 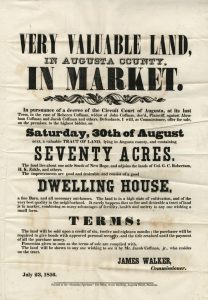 A Broadside advertising a land sale made by decree of the Augusta County Circuit Court circa 1856.

The Augusta County chancery causes are the most voluminous of any locality in Virginia and are one of the longest and most complete continuous collections of chancery records of any locality in the country. They document an unusually large geographic area. For the period 1745 to 1770, the boundaries of Augusta County encompassed most of western Virginia and what became the states of West Virginia, Kentucky, Illinois, and Ohio, and parts of present-day Pennsylvania as far north as Pittsburgh. In fact, the Augusta County court held sessions at Fort Pitt in Pittsburgh when claim to that area, known as the West Augusta District, was in dispute.

Even after the county was reduced to roughly its present size in 1778, the Augusta County Court continued to be the repository for chancery causes from 28 localities, which were heard by the Staunton Superior Court of Chancery from 1801 to 1831.

When completed, the Augusta index and images will join the over 5 million chancery images from 48 localities already posted online. The scanning portion of the Augusta project is slated to begin in February 2011. For more information on the Library of Virginia’s digital chancery records initiative, please visit the Chancery Records Index.