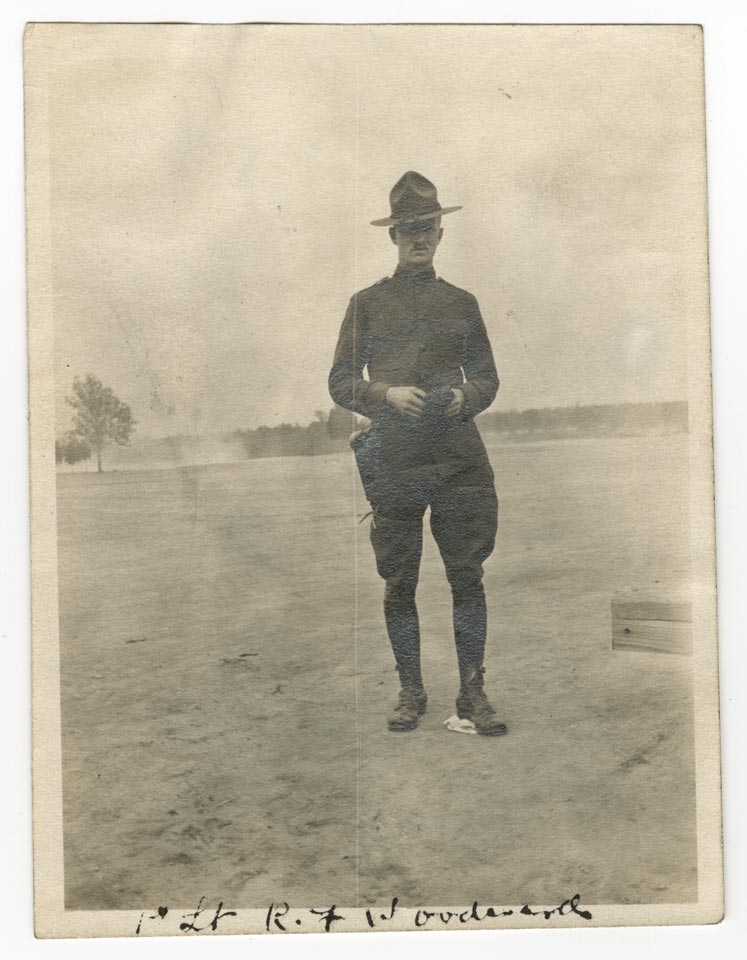 Created in 1919 by Governor Westmoreland Davis, the World War I History Commission’s task was to collect, edit, and publish source material concerning Virginia’s participation in the Great War. The Commission also conducted a survey of World War I veterans in Virginia using a printed questionnaire mailed to each soldier or nurse by local branches of the Commission. The soldier or a family member completed and returned the questionnaire to the local branch, which forwarded a copy to the Commission’s Richmond office. In June 1928, the Commission disbanded, transferring all records to the Virginia State Library (now the Library of Virginia). An invaluable source of genealogical and military information on Virginians who served in World War I, this collection of nearly 14,800 questionnaires was processed and microfilmed in 1996 and

When I joined the State Records section in 1999, I began processing the remaining records of the World War I History Commission. Much to my surprise, I discovered additional questionnaires filed separately, which had not  been filmed or included in the digital collection.

As it turned out, staff of the Commission had set these records apart from the remainder of the collection by design.

In preparation for its first source volume, Virginians of Distinguished Service of the World War, published in 1923, the World War I History Commission reviewed and removed all questionnaires for soldiers receiving citations, decorations or other honors. The Commission then created a separate alphabetical reference file consisting largely of questionnaires, but also including photographs, letters, newspaper clippings and certified copies of citations. This collection offers poignant details of Virginia’s World War I heroes.

Illustrative of this rich collection is the file of Richard Fuller Woodward, submitted to the Norfolk branch of the War History Commission by his wife, Jeanne B. Marsh Woodward. The questionnaire, letters, newspaper clippings, and photographs tell a story of both heroism and grief. 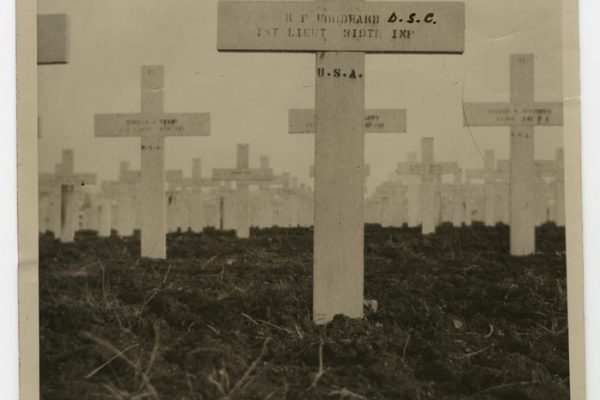 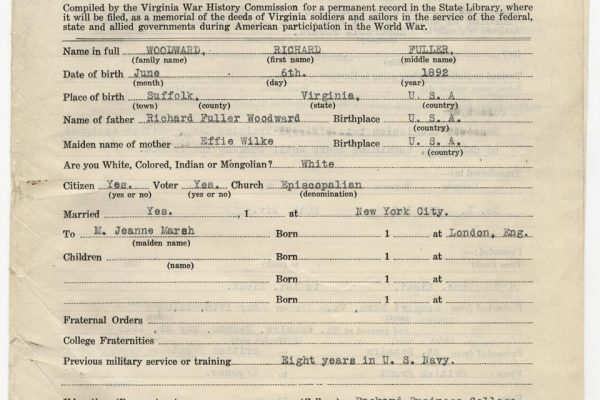 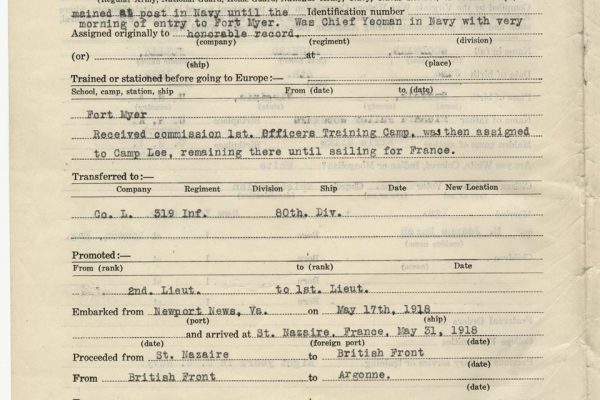 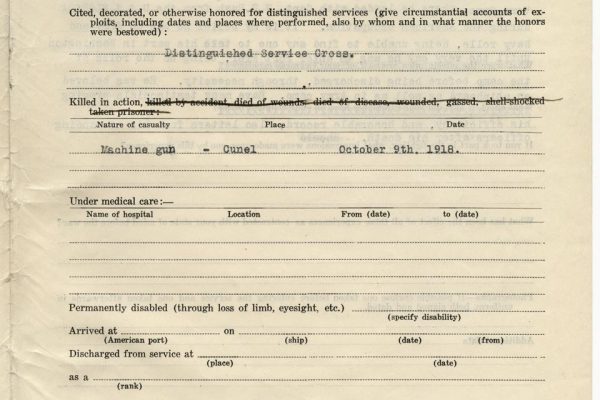 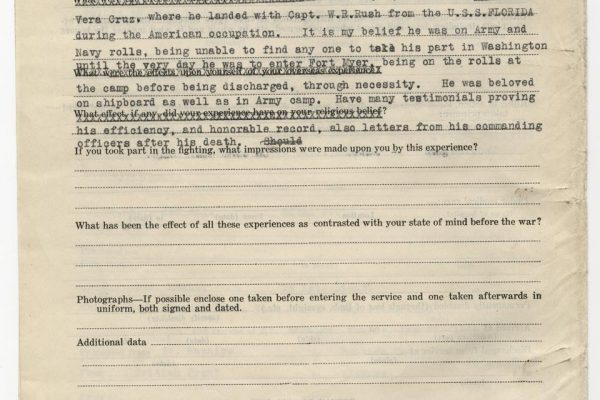 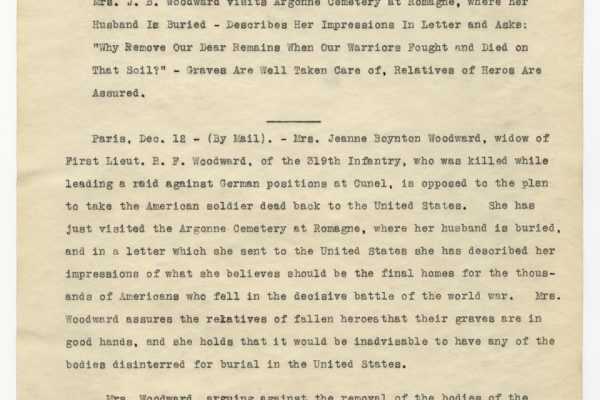 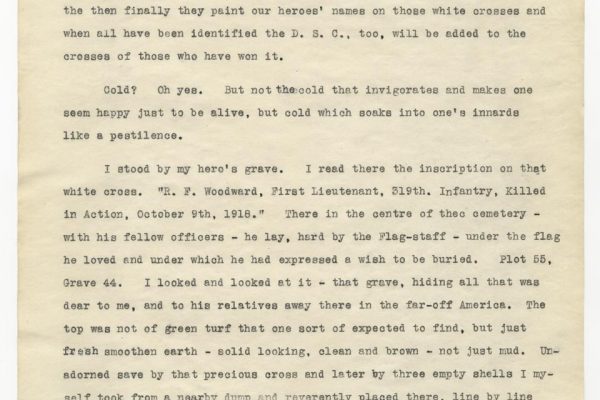 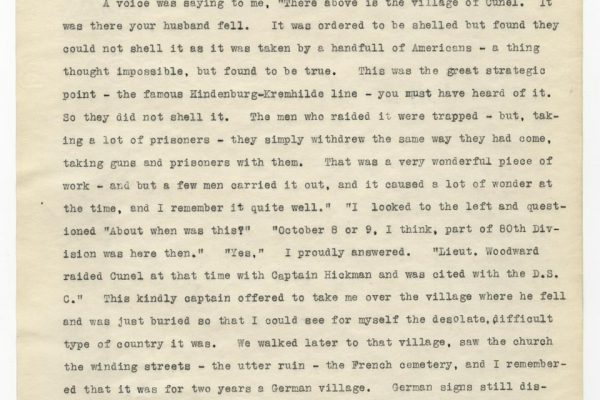 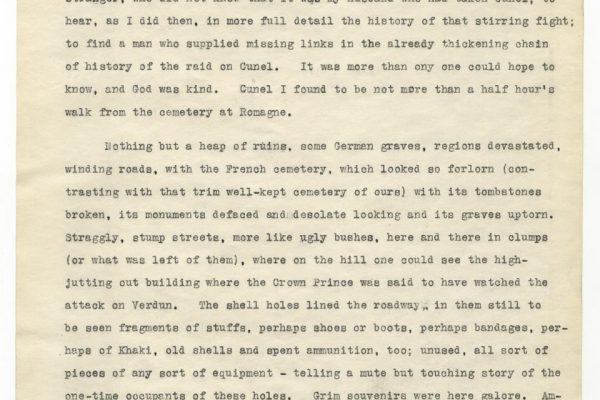 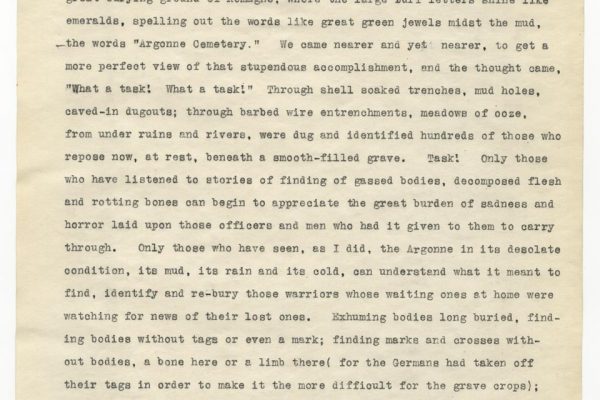 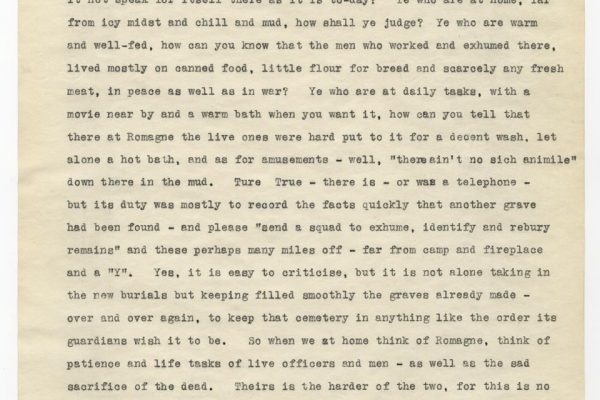 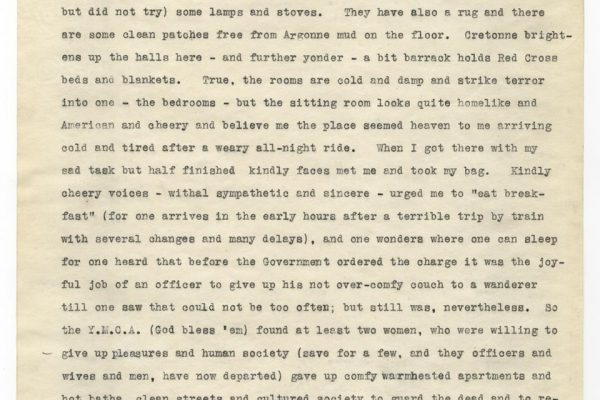 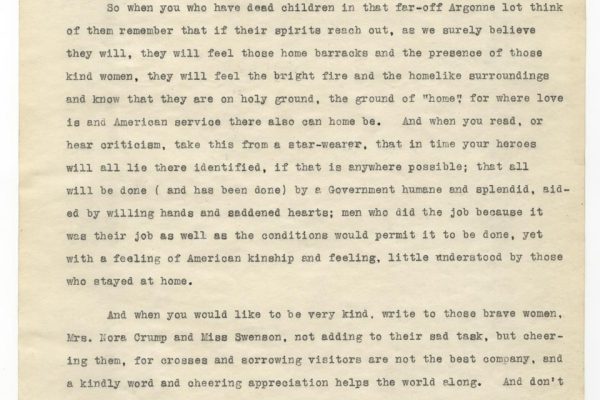 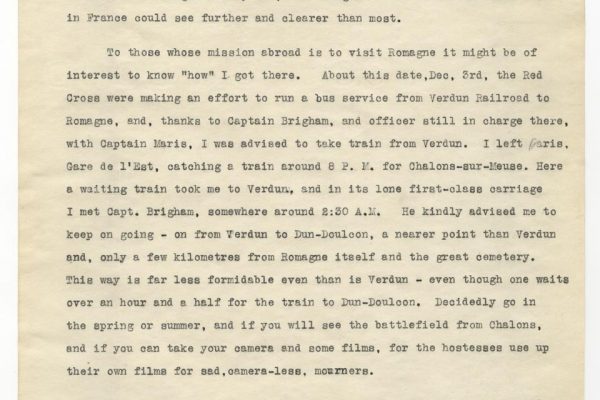 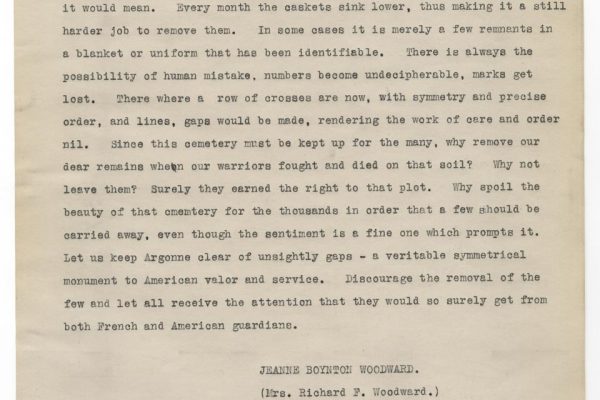 On the night of 9 October 1918, First Lieutenant Woodward, commander of Company L, 319th Infantry Division, led his troops on a raid of German occupied Cunel, France. During the fighting, Woodward destroyed a German machine gun nest and captured eighty prisoners. As he led his company through the village, German troops shot Woodward three times. Without regard for his injuries or personal safety, Woodward assisted his wounded men to shelter until a final volley of machine gun fire killed him. The Suffolk, Virginia, native was buried in Argonne Cemetery at Romagne. On 12 January 1919, General John J. Pershing awarded Woodward the Distinguished Service Cross posthumously for bravery and heroism.

Shortly after the war, Jeanne Woodward embarked on a journey to France to visit her husband’s grave. Born in London, Mrs. Woodward left New York on 14 February 1919 and traveled first to England to visit relatives. After a brief stay, she arrived at Le Mans, France in April 1919. She held out hope, she wrote the Norfolk War History Commission in 1920, “that I would find my husband’s death all a mistake (as when I sailed much doubt existed as to his death).  I met his brother officers and learned full and complete details of his heroic passing. It was, alas, too true.” 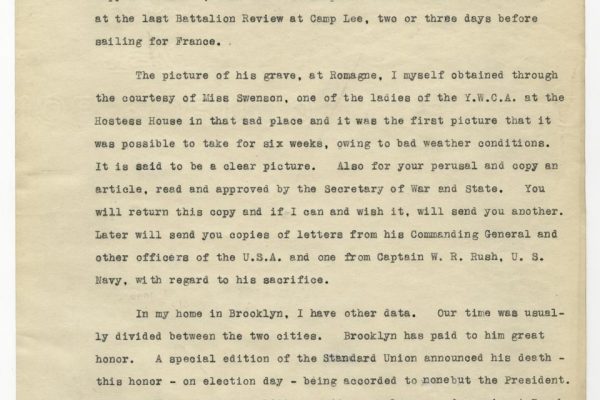 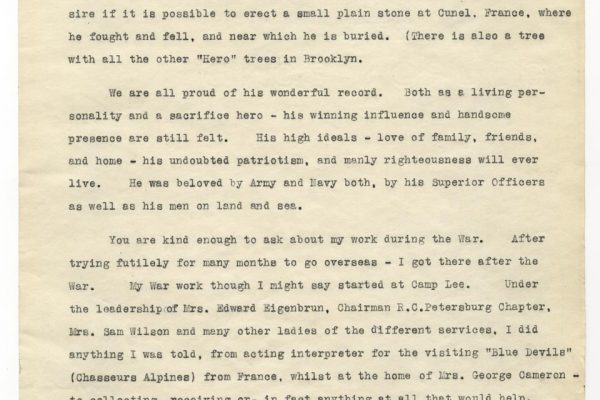 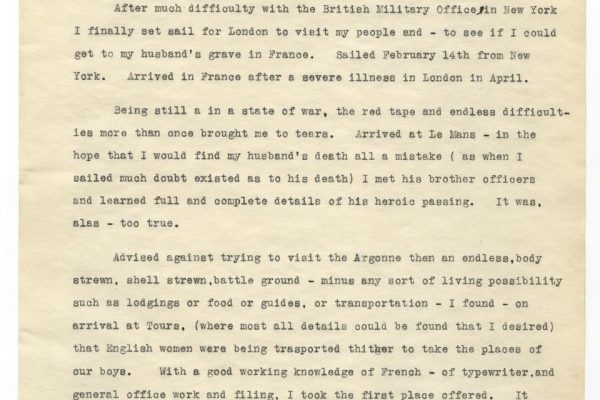 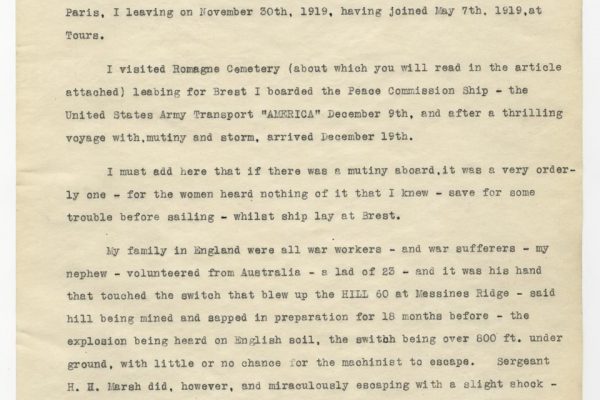 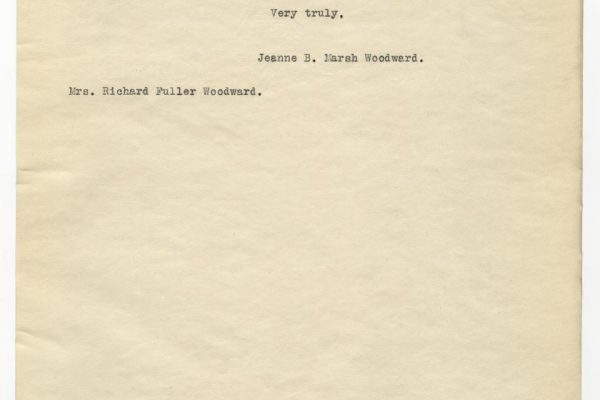 The destruction of the French countryside after four years of war delayed her pilgrimage to Romagne until the fall of 1919. Jeanne Woodward described her emotional graveside visit in a letter published in the Brooklyn Standard Union. “I stood by my hero’s grave. I read there the inscription on that white cross. R.F. Woodward, First Lieutenant, 319th Infantry, Killed in Action, October 9, 1918,” she wrote. “I looked and looked at it that grave, hiding all that was dear to me, and to his relatives away there in far-off America. The top was not of green turf that one sort of expected to find, but just fresh smoothen earth – solid looking, clean and brown – not just mud.” She was overwhelmed with emotion and a “sense of complete despair took possession of me for a moment. As if I could not bear it all. Then a calm a peace, a sort of understanding succeeded that dread ache, a sense of rest. And I knew that he was all right there and happy.” She captured the moment by taking a picture of her husband’s tombstone. Later, she submitted it, along with Lt. Fuller’s photo, taken at Camp Lee, Virginia in May 1917, to the Norfolk War History Commission.

The Virginians of Distinguished Service reference file adds greatly to our understanding of the heroism and sacrifice of Virginians during World War I.  The Library of Virginia microfilmed these invaluable records  (Miscellaneous Reels 4694-4701).