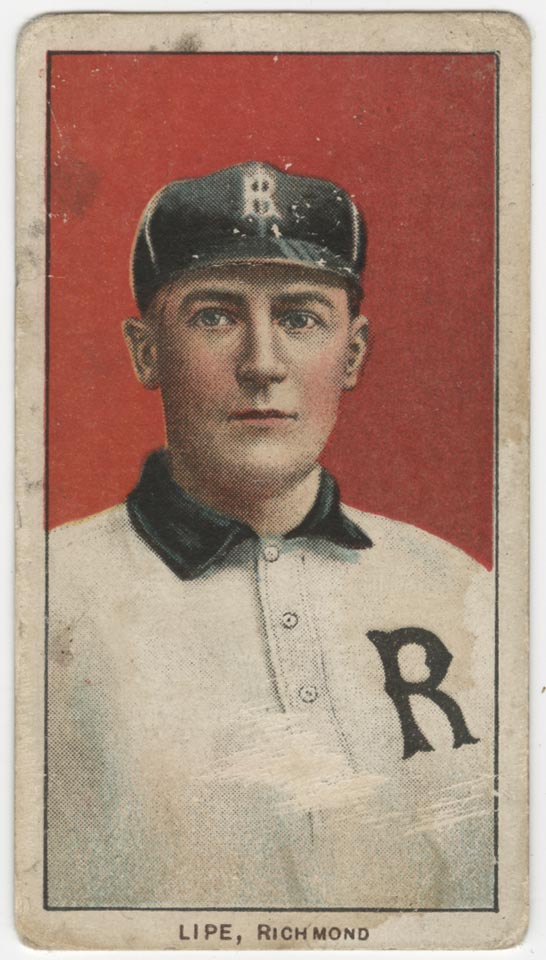 Buy Me Some Peanuts And Cigarettes: Baseball Cards in the Archive

Tucked away in the Business Records Collections at the Library of Virginia are five 2.5 x 1.5 inch baseball cards issued by the American Tobacco Company.  Long before baseball cards were sold with bubble gum, they were sold with tobacco products.  Not only did the cards depict the major league stars of the day, but also minor leaguers throughout the country.  The five cards which make up the American Tobacco Company Baseball Cards collection (LVA Acc. 29187) feature Virginia League players.

Two of the cards in the collection, the color portraits of Perry Lipe and Ray Ryan, are part of what is known as the T206 series.  This series of cards, issued from 1909 to 1911, was sold with a wide range of tobacco products such as Sweet Caporal, Piedmont, and in the case of the Lipe and Ryan cards, Old Mill.  The minor leaguers in the series were from a variety of leagues across the country, including players from the Virginia, Texas, South Atlantic (Sally), and Southern Leagues.  The T206 series is known as the series containing the most valuable baseball card–the Honus Wagner card, which has been valued in some instances at over $2 million (based on condition).

The other three cards in LVA’s collection–of Martin (Marty) Walsh, George Cowan, and W. G. Smith–are part of the T209 photo series, printed in 1910.  This is one of two series issued with Contentnea Cigarettes, which were produced in Wilson, North Carolina.  One was a color image series similar to the T206 series, but with many fewer players, and the second a photo series of which the above-mentioned cards are examples.  These cards represented players in the Virginia, Carolina Association, and Eastern Carolina leagues.

The Virginia League was a lower minor league circuit that had brief incarnations in the last two decades of the 19th century before returning to operate as a Class C league from 1906 to 1919, and a Class B circuit from 1920 to 1928.  The number and location of the teams fluctuated, and between 1914 and 1927 some North Carolina cities were also part of the league.  The mainstays of the circuit were the Norfolk Tars (also called the Crew of the Mary Jane or the Mary Janes) for 23 seasons, the Portsmouth Truckers (also called the Pirates and the Foxes at times) for 20 ½ seasons, and the Richmond Colts for 20 seasons.  In 1910 the Portsmouth nine moved to Petersburg becoming the Goobers and remaining in the league for 16 seasons.  A new Portsmouth franchise entered the league as the Pirates in 1912 and reclaimed the Truckers moniker in 1914. 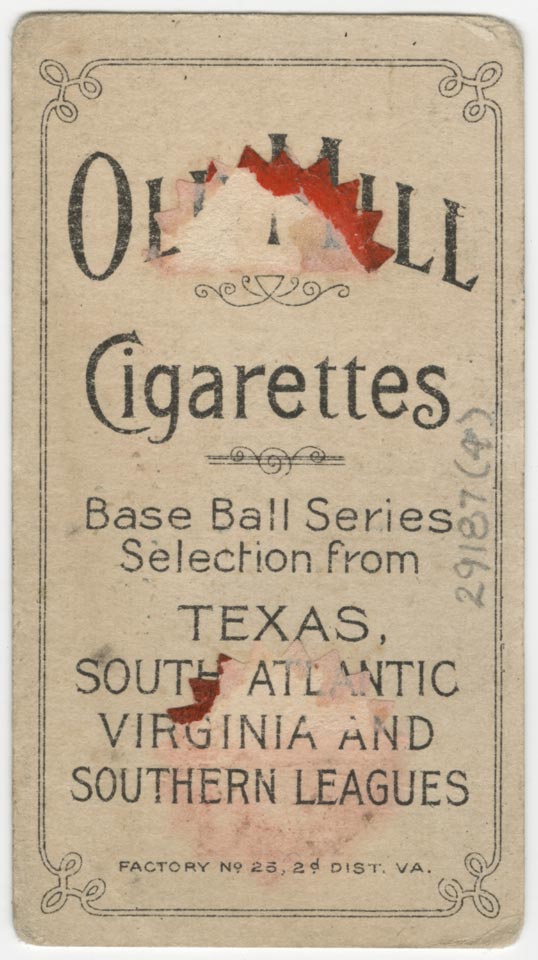 Back of the Perry Lipe card

Born 14 February 1875 in Montgomery County, Illinois, Perry Lipe began playing professional baseball in 1898.  After a ten-year career playing in the Southern Association, the Cotton States League, and the South Atlantic (Sally) League, and a two-year stint as manager of the Macon Brigands (Sally League), Lipe arrived in Richmond to play third base for and manage the Colts.  In his first season at the helm, Lipe steered Richmond to the Virginia League crown and led the league in scoring with 65 runs.  The Colts stumbled to third in 1910.  Lipe then returned to the Sally League, playing for and managing teams in Macon, Savannah, and Albany.  He never swung a strong bat, but fielded well enough to last 19 seasons in the minors.  He is credited with playing in 1,127 consecutive games, a professional baseball record that stood until 1923.  Lipe returned to Montgomery County, Illinois, with a Georgia bride and worked as a farm laborer.  He died on 25 January 1955. 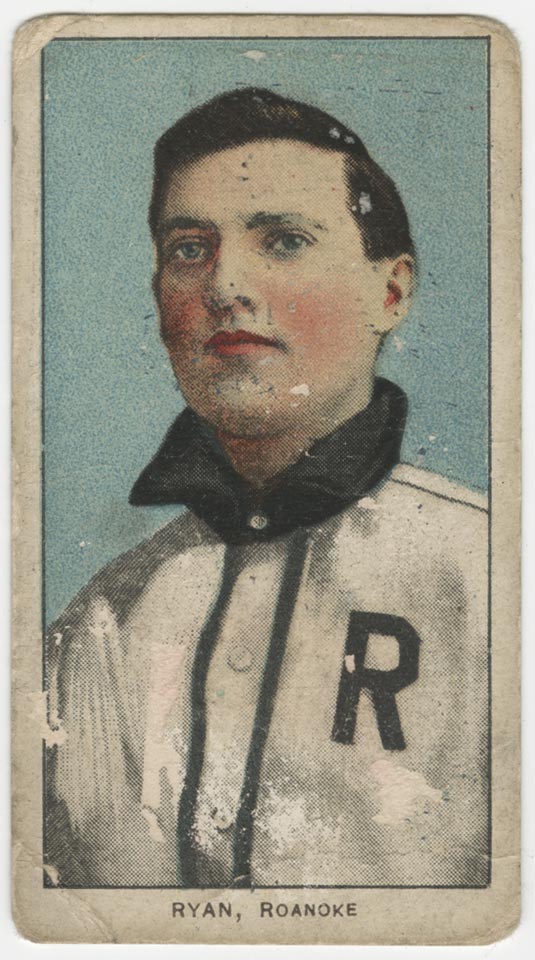 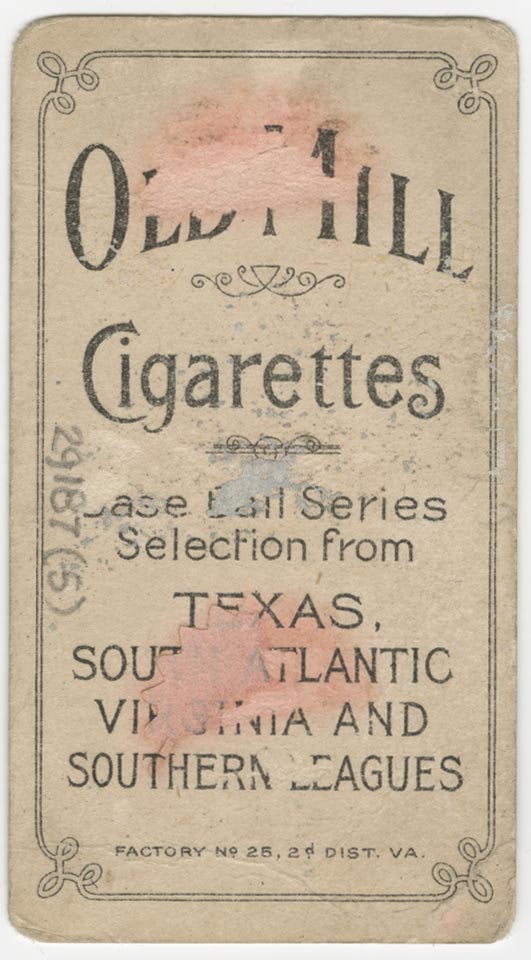 Back of Ryan's card

Back of the Ray Ryan card

Ray Ryan spent 60 years in baseball.  Born 18 February 1883 in St. Martin, Ohio, he began his career playing with a company team and joined a recognized minor league in 1906, playing for Lancaster in the Ohio-Pennsylvania League.  He entered the Virginia League with the Danville Red Sox in 1907-1908, and in 1909 he caught for the pennant-winning Roanoke Tigers.  After an unsuccessful tryout with the major league Chicago White Sox, Ryan spent some time out of professional baseball.  He returned to the minors in 1912, splitting time between the Ohio State League and the Central League.  In 1913 Ryan managed the Wheeling Stogies before returning to the Virginia League, playing with and managing the Norfolk Tars.  Ryan moved to the Richmond Colts in 1914, guiding them to a second place finish.  The Colts disbanded and Ryan picked up the catcher’s mitt and managerial reins of the Rocky Mount (N.C.) Carolinians, leading them to the Virginia League pennant in 1915 and heading the team until the league disbanded in 1917.  In 1921-1922 he became part-owner and manager of the Richmond Colts; meanwhile he played a few games with the Syracuse Stars and scouted for the Cleveland Indians.  Ryan served as manager, general manager, and owner for teams in West Virginia and Pennsylvania during the 1930s.  He organized the Mountain State League and Appalachian League in 1937 and revived the defunct Virginia League in 1938, serving as president of all three leagues at one time.  Out of baseball during World War II, Ryan returned to the diamond in various capacities for teams in Florida, Iowa, and South Carolina.  His last effort in baseball was to secure AAA league status for the Miami Marlins.  Ryan died in Miami, Florida, on 8 August 1958. 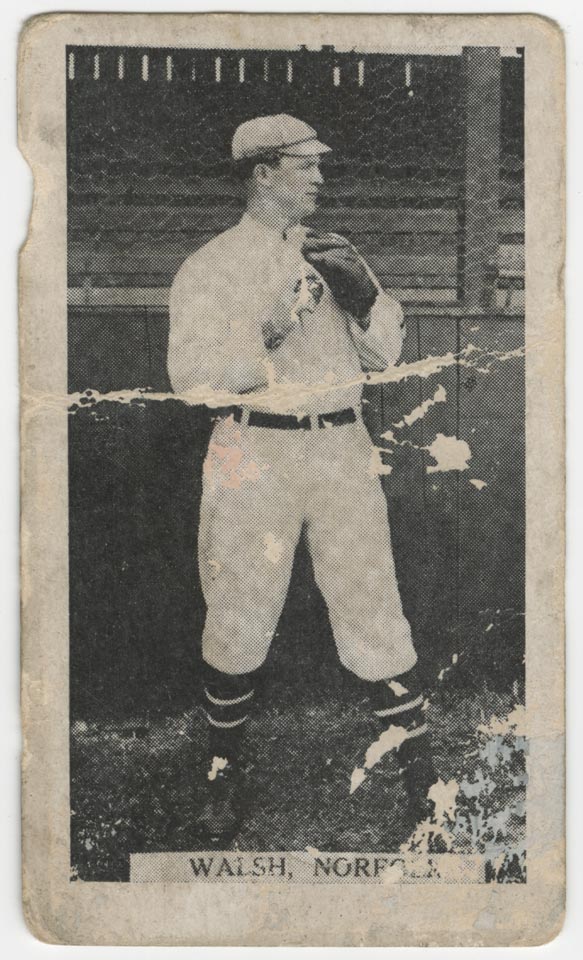 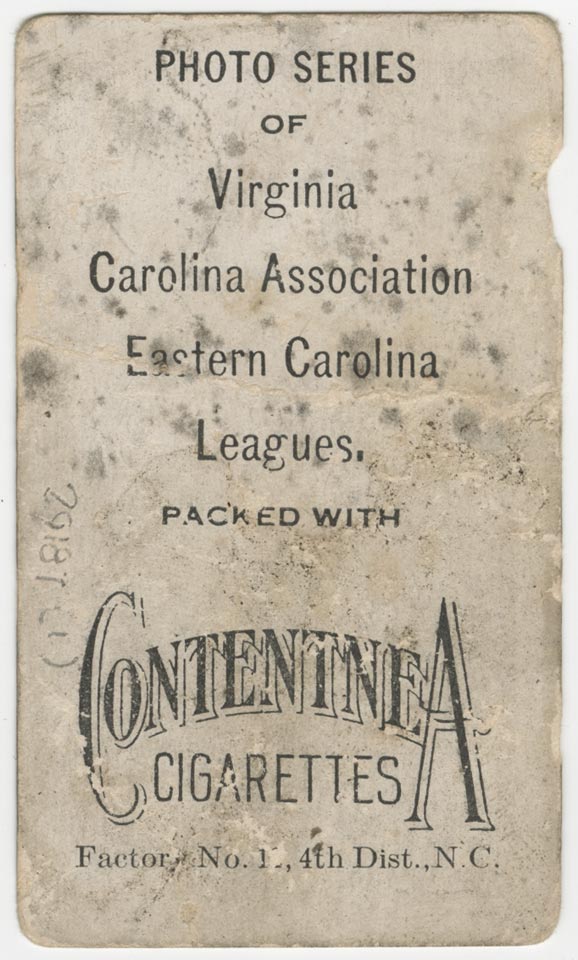 Back of Walsh's card

Back of the Martin Walsh card

Martin (Marty) Walsh began his career as a pitcher with the Portsmouth Truckers in 1907 and was traded to the Danville Red Sox in the middle of the season.  In 1908, he won 30 games for the second place club.  After starting the 1909 season with Danville, Walsh went to the Greensboro club in the Carolina Association where he played outfield.  Walsh returned to the Virginia League in 1910 winning 23 games over the next two seasons for the Tars.  Walsh then moved to Bridgeport (CT) in the Eastern Association (later Eastern League) playing for the Crossmen in 1914, 1916, 1919, and 1920.  Walsh finished his career with a brief stay with Spartanburg of the Sally League in 1921; his professional win-loss record was a respectable 130-90. 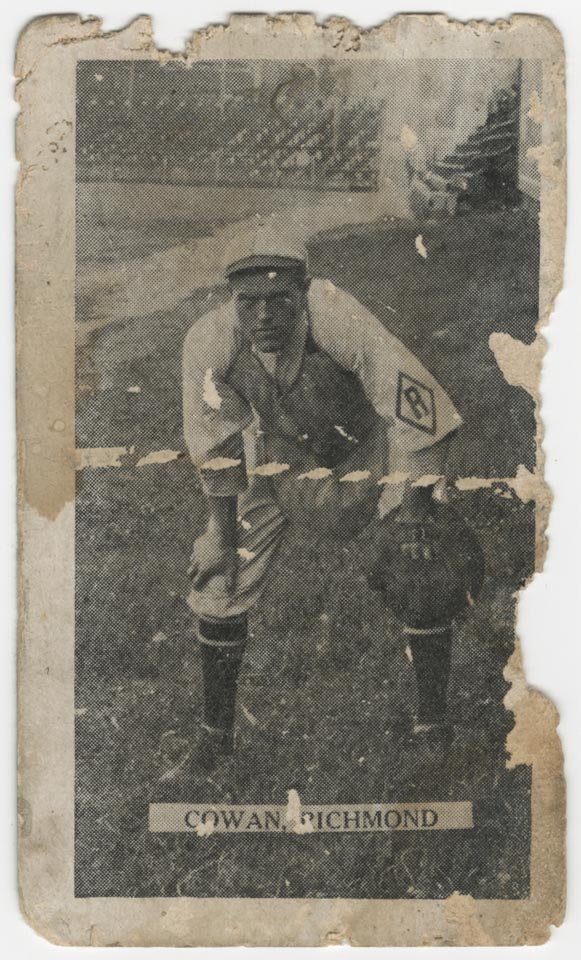 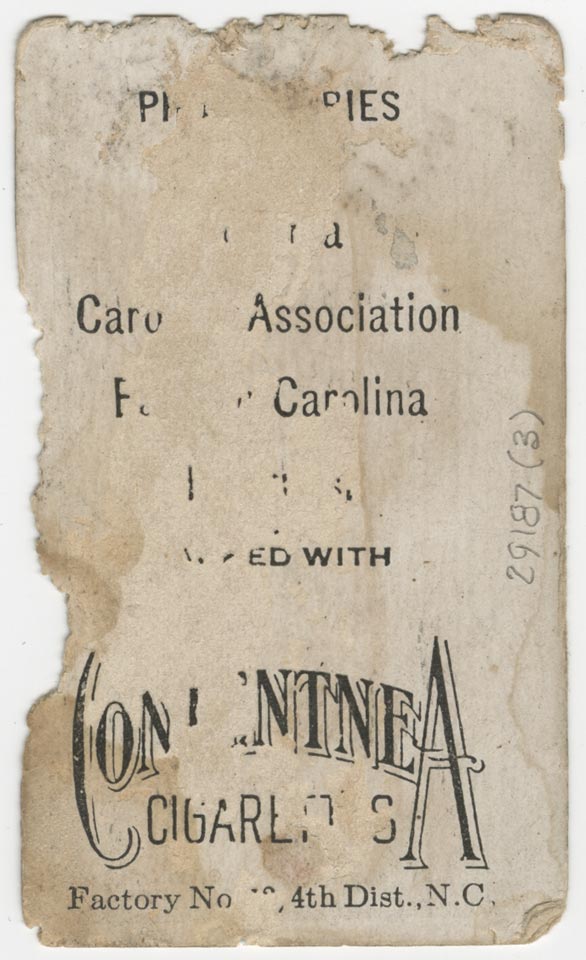 Back of Cowan's card 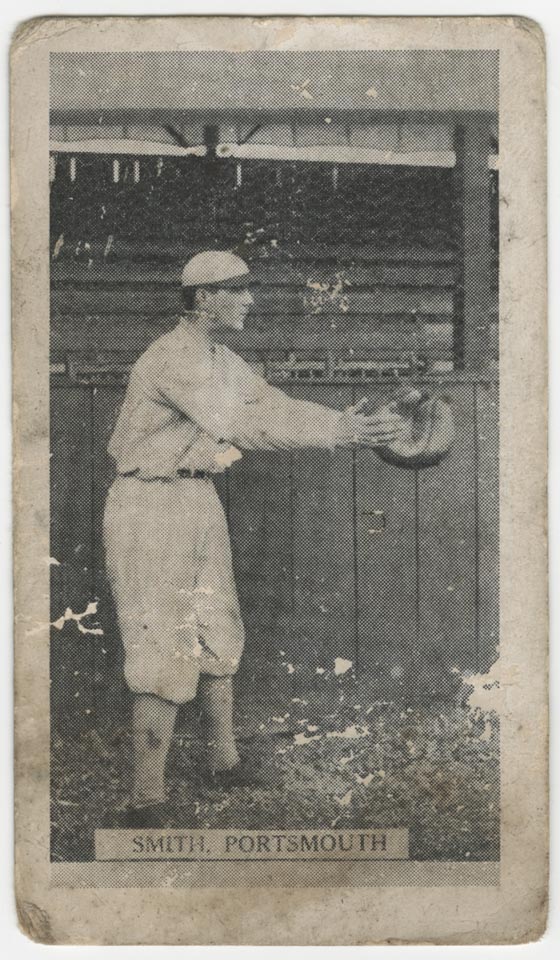 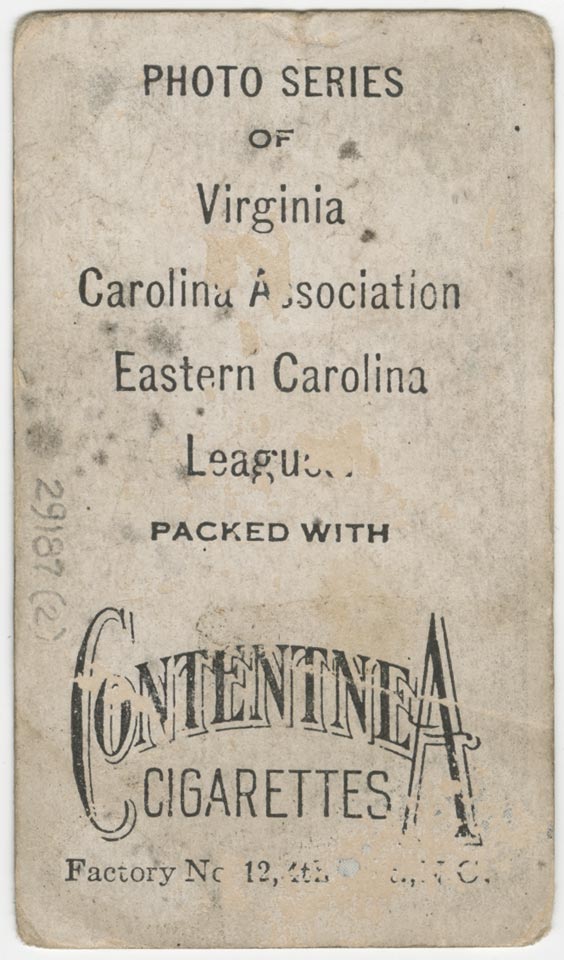 Back of Smith's card

Born in 1881 in New Jersey, George Cowan spent his six-season career in the Virginia League, most of that time as a catcher for the Richmond Colts.  He played parts of the 1909 and 1910 seasons with Portsmouth.  One of his replacements in Portsmouth after his departure was W. G. Smith.  Smith’s career consisted of one year with the Portsmouth Truckers/Petersburg Goobers before he faded away into anonymity.