Commonwealth of Virginia versus Abolitionism

During the 1820s and 1830s, northern antislavery groups that demanded the immediate abolition of slavery began to emerge. Led by abolitionists such as William Lloyd Garrison, Arthur Tappan, and Theodore Weld, they instituted an aggressive print campaign against slavery. Abolitionist societies published newspapers and pamphlets that bitterly condemned slavery and called for its extinction. Needless to say, abolitionist literature was not well-received in slaveholding states, including Virginia.

In 1835, a Frederick County, Virginia, grand jury issued a criminal presentment against the Abolition Society of New York. In a lengthy and strongly worded indictment, the grand jury referred to the antislavery organization as an “evil of great magnitude” and accused it of disturbing the peace of the commonwealth and threatening the lives of its citizens by inciting slaves to rebel. The grand jury encouraged local law enforcement agencies throughout Virginia to adopt “increasing vigilance … in the detection of all fanatical emissaries, and in the suppression of their nefarious schemes and publications.” Furthermore, it called on the General Assembly to enforce present laws and enact stricter legislation against written or printed material that encouraged slave insurrection. The presentment also named Arthur Tappan, whom the grand jury considered to be the “prime mover” in the society. Tappan helped found the Abolition Society of New York in 1831, which two years later evolved into the American Anti-Slavery Society.

No criminal trial was held. It was more of a symbolic response, a release of pent-up anger and fear by the citizens of Frederick County. They were angry at these “outsiders” interfering with their institutions. They were fearful that the abolitionist publications would incite more slave revolts similar to the one led by Nat Turner in Southampton County only a few years earlier. 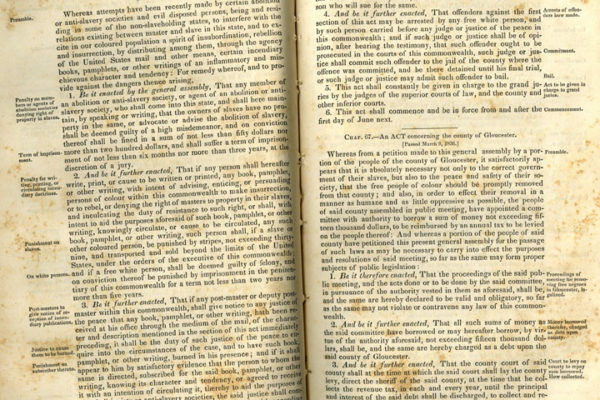 Act of the General Assembly

In response to the threat posed by the abolitionist societies, the General Assembly enacted stricter legislation in 1836 to suppress the circulation of abolitionist publications. Anyone speaking, writing, printing, and/or circulating “incendiary doctrines” that denied the right of people to own slaves or encouraged slaves to rebel would be fined and imprisoned. Postmasters were required to give notice to local authorities if they received abolitionist publications. The local authorities were to burn the publications immediately and arrest the individual who was to receive them.

Recently, I discovered two Grayson County criminal cases in which local pro-slavery citizens attempted to use the 1836 act to silence an antislavery minister named Jarvis C. Bacon. A Wesleyan Methodist minister who moved to Grayson County in 1848 to start a church, Reverend Bacon regularly found himself in hot water with the local citizenry because of his opposition to slavery. In 1849, a grand jury issued indictments against Reverend Bacon for circulating two abolitionist publications: Frederick Douglass’ autobiography, Narrative of the Life of Frederick Douglass, an American Slave, and an antislavery sermon delivered at the Sixth Presbyterian Church of Cincinnati, Ohio. Both trials were held in September. A jury quickly found him not guilty regarding the Douglass autobiography, but the other jury had a more difficult time reaching an agreement of not guilty regarding the sermon pamphlet. Reverend Bacon’s abolitionist reputation made it difficult for him to remain in Grayson County. He left the county and the commonwealth in 1851.