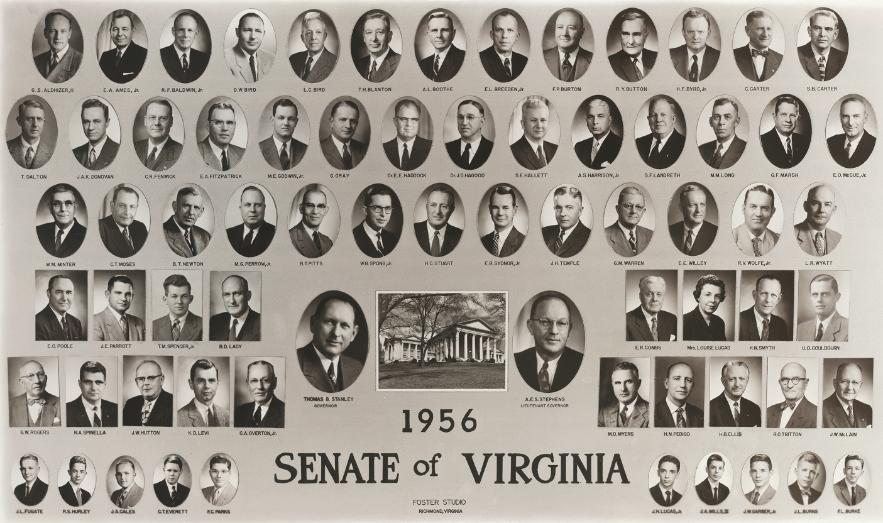 "What Did You Learn in School Today?" – The Records of the Virginia Pupil Placement Board

As public schools across Virginia open this week, Out of the Box would like to spotlight the records of the Virginia Pupil Placement Board, a state agency created in 1956 in reaction to the Brown v. Board of Education (1954) United States Supreme Court decision.  The Pupil Placement Board, as one arm of Virginia’s policy of Massive Resistance, was charged with assigning, enrolling, or placing students to and in public schools, a task formerly under the control of local school boards and divisions of superintendents.  The board operated from 1957 to 1966, but its power diminished with the end of Massive Resistance in 1959.

The board’s authorizing legislation required members to take several factors into consideration when placing a pupil in a school. Factors included but were not limited to the health of the pupil, his or her aptitudes, the availability of transportation, and, “such other relevant matters as may be pertinent to the efficient operation of the schools or indicate a clear and present danger to the public peace and tranquility affecting the safety or welfare of the citizens of such school district.” Students who were already in school before the board’s creation were not obligated to apply for placement. Thus, the board only oversaw the placement of students who sought to move from one school to another or who were applying to attend school for the first time.

Applications for student placement (641 boxes) comprise the bulk of the collection as they were required for all students entering, transferring or advancing in a public school. The board supported segregation through seemingly non-racist motivation, devising a series of criteria which would subtly separate students by race without referencing race directly.  The board created an application that asked which school the student “last attended” or “name and location of school or schools in Virginia in which any other children of yours are enrolled.” These seemingly benign questions indicated the race of the student as the board knew the existing racial make up of schools throughout the state.  For new students, the board required that a birth certificate be presented from which race could be determined, but this information was not transferred into writing on the placement form. Applications for student placement exist for most counties and cities, but only begin in 1960, with a few applications from the late 1950s remaining in court case files.  The application changed little throughout the board’s existence.

The majority of the Correspondence and Subject Files series consists of student transfer requests and the board’s form letter responses.   The board established criteria for denial:  school requested was too far from the child’s home; application was submitted after the due date; and the student was behind academically and would not be able to keep up with the children at the requested school.  Many parents fought these transfer denials, which provides additional documentation, including parental letters, maps plotting bus routes and student residences, and the court proceeding found in the legal files. Other noteworthy records can be found in the County Transfer sub-series.  Some of the correspondence between the board and counties describe the confusion over how to place students, whose race was not easily categorized as either black or white, particularly those belonging to Native American tribes in the eastern region of Virginia.  Despite the subject matter of the collection, it contains no incendiary state documents or letters, though there are a few rhetoric filled pro-segregation letters that can be found in general correspondence, and some of the transfer requests also contain parental letters supporting or opposing segregation. 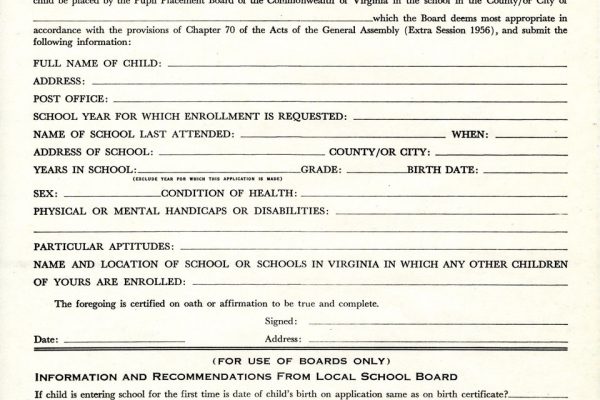 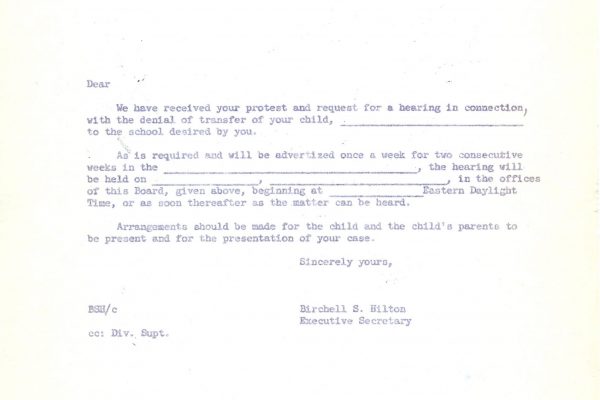 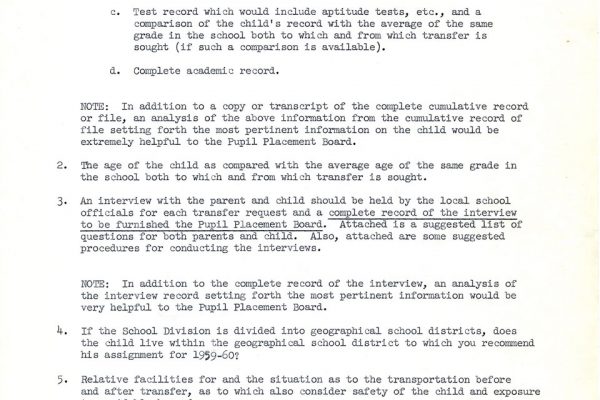 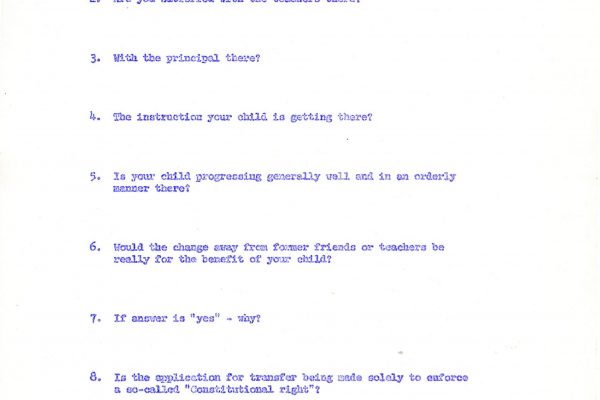 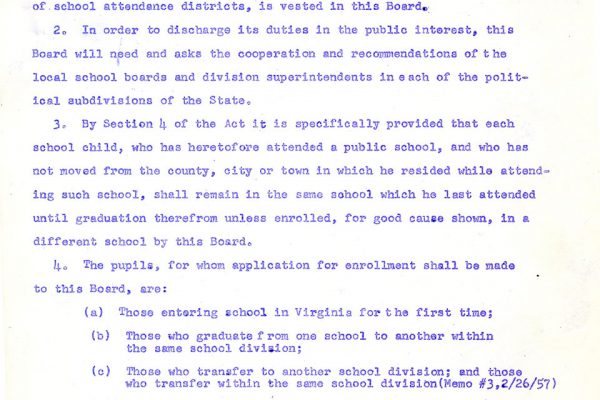 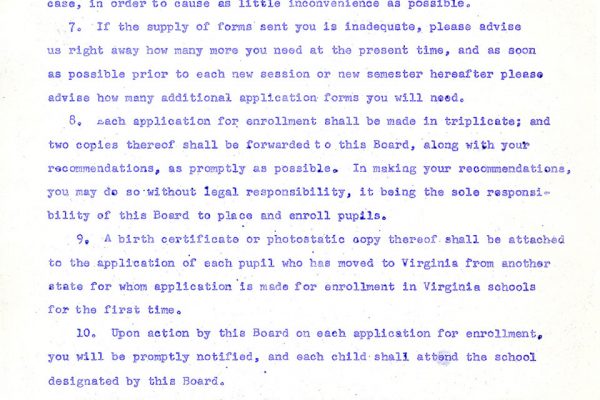 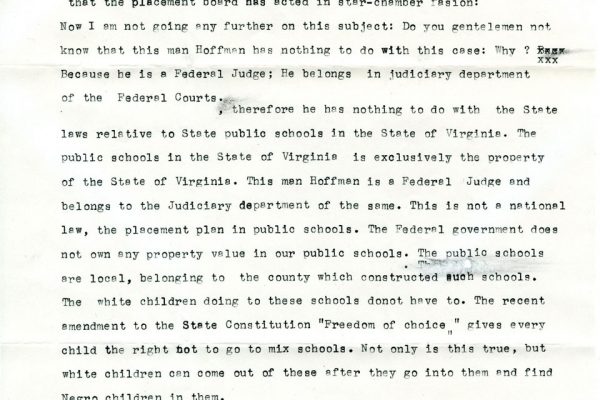 Under the Printed Materials series can be found the board’s large collection of newspaper clippings primarily pertaining to Virginia education issues, but also covering key moments in the civil rights struggle: the Little Rock Nine, the Ole Miss riot of 1962, the 1963 March on Washington, the 1962 election of George Wallace as governor of Alabama, the 1963 murder of African-American civil rights activist Medgar Evers, and the assassination attempts on Dr. Martin Luther King. The articles are mainly from the Richmond News Leader and Richmond Times Dispatch, but also contain some articles from other state newspapers, as well as national publications.  The newspaper articles serve as a testament to the scare tactics used to enforce Massive Resistance, from overtly racist letters to the editor, to publishing the address and image of the home of a family who challenged Virginia’s segregationist stance in court.

The Pupil Placement Board existed in two incarnations.  The original three members, Andrew A. Farley, Beverley H. Randolph, Jr., and Hugh V. White, served from the board’s creation until they tendered a collective resignation effective in early 1960. Their resignations followed an Act of the General Assembly approved on 28 April 1959 that returned the responsibility of pupil placement to localities.  The General Assembly bestowed a commendation on the board for their service to Virginia’s public schools, stating “their example is in the best traditions of Virginia and should be emulated by all those whose convictions are based upon the diverse powers and duties of the State Governments and those of the federal government.”  In July of 1960 Governor James Lindsay Almond, Jr., named three new members: Dr. Ernest J. Oglesby, Alfred L. Wingo and Edward T. Justis, but this board held little sway over public education, as school boards in the largest cities and counties had already taken back control of student placement. On 5 April 1966 by an act of the General Assembly, the Pupil Placement Board Act was unceremoniously repealed “providing for the local enrollment for placement of pupils.”