The Library of Virginia has completed the digitization and transcription of the last of the cohabitation registers in its possession, the Henry County Cohabitation Register, 1866. Others have already been transcribed and are available in the cohabitation register digitization project via Virginia Memory. For African-American genealogical researchers, the names contained herein provide priceless clues to retracing their ancestors. Cohabitation registers imparted legal legitimacy to African-American marriages and children. This was also the first time many of these individuals would appear in public record under their own names. 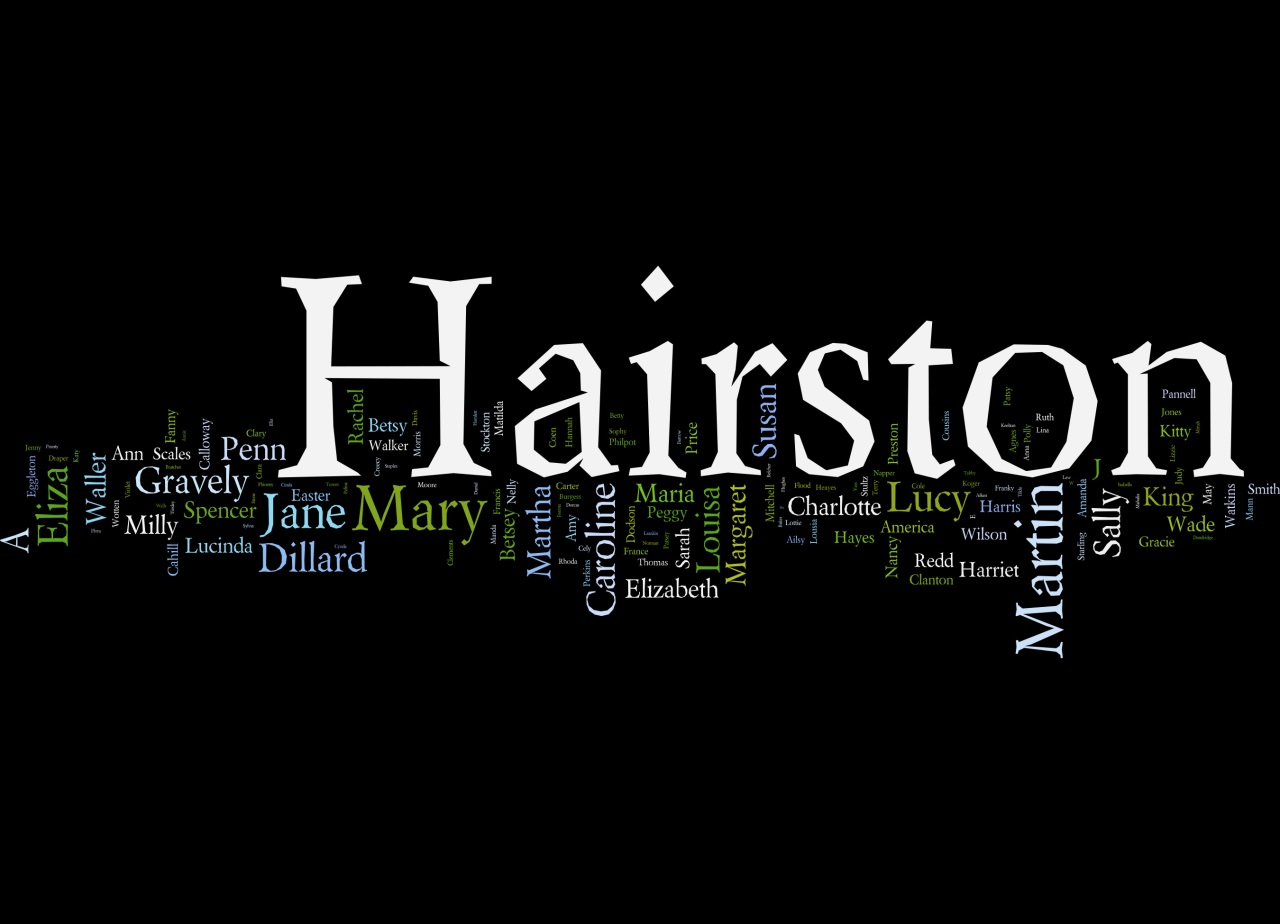 This visual representation of the names of the mothers found in the Henry Cohabitation Register illustrate the frequency of use by the size of the name.

Naming under the practice of slavery was fraught with power dynamics. The enslavers often gave names to the enslaved. The amount of input the family of the child would have in his or her name varied, but journals of slave-holders indicate they specifically assigned names to slave children on a regular basis.1 Newly enslaved Africans were often issued a new name by their captors, causing their identities to become yet another site of colonization. Naming was a powerful tool for enforcing cultural assimilation and denigrating African cultural identity.2

Slave names tended to fit within five categories: diminutive versions of English names (Jim, Bess), place names (London, Kingston), Classical names (Jupiter, Venus), Biblical names (Moses, Rachel), and African names (Quashie, Beneba). Interestingly, even the African names may have been assigned by slaveholders, since they show neither variation nor geographical association with the point of origin.[3] Both place names (primarily of British locations) and African names were more popularly used for men than women. Sadly, naming was also a matter of economics under slavery. Certain types of names may have increased or decreased the valuation of a slave.[4] For instance, a slave owner might assign a Biblical name to a house maid, wishing to diminish her African heritage and endow both virtue and literal value.

Enslaved people were usually only given a first name, which forced familial identification away from the slave family and under the paternalistic structure of slavery.5 After emancipation, former slaves sometimes took the surnames of their former enslavers. Taking the name of a former master may have also been a way of maintaining extended family and community ties with former slaves from the same plantation, or even subverting the hierarchy by imbuing themselves with power.6 A slave may have also possessed his or her own surname, but not been publicly acknowledged by it until after emancipation.

Naming could also be used as a form of resistance, a way to claim or reclaim identity and create community. 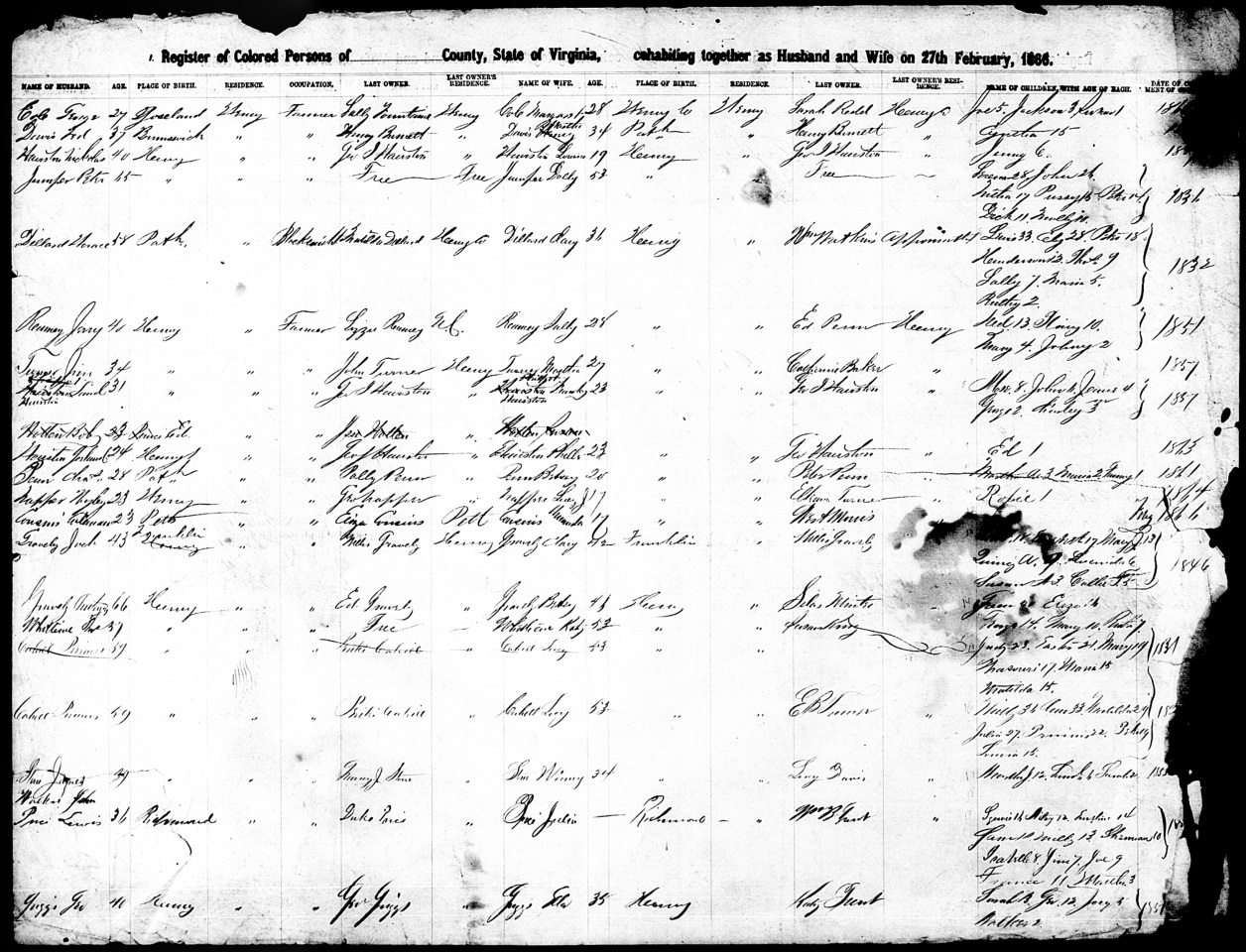 Henry County (Va.) Register of Colored Persons Cohabiting Together as Husband and Wife, 1866.

In keeping with the African dual-naming system, in which one would have a given name as well as a name used only within the family circle, African-American slaves often had “country names” or nicknames.7 These nicknames were often of African origin or derivation, or from the Ghanaian day-naming tradition in which male and female names were associated with each day of the week. Though advertisements for runaway slaves often used both the formal given name and nickname, these private names might otherwise be unrecorded.

By the time the Henry County Cohabitation Register was recorded in 1866, former slaves were free and able to form their own familial structures and name children (or rename themselves) without interference. Many of the pairings recorded here pre-date the Civil War, with grown children well into their 30’s. It is impossible for me to read these long lists of fathers, mothers, and children without thinking about what influenced their naming decisions and how that may have reflected and shaped identity. The 24 women named “America” in Henry County would indicate a strong sense of national pride. One man is named “Liberty.” Did they name to honor relatives? What if any practices remained from Africa? There are only a few African names, such as the day-name derivative Afiah, but that doesn’t preclude the existence of unrecorded African nicknames. Place names, Biblical names, and Classical names persist in these records but a more thorough study would be needed to see if African-American names statistically differed from Caucasian names following emancipation. 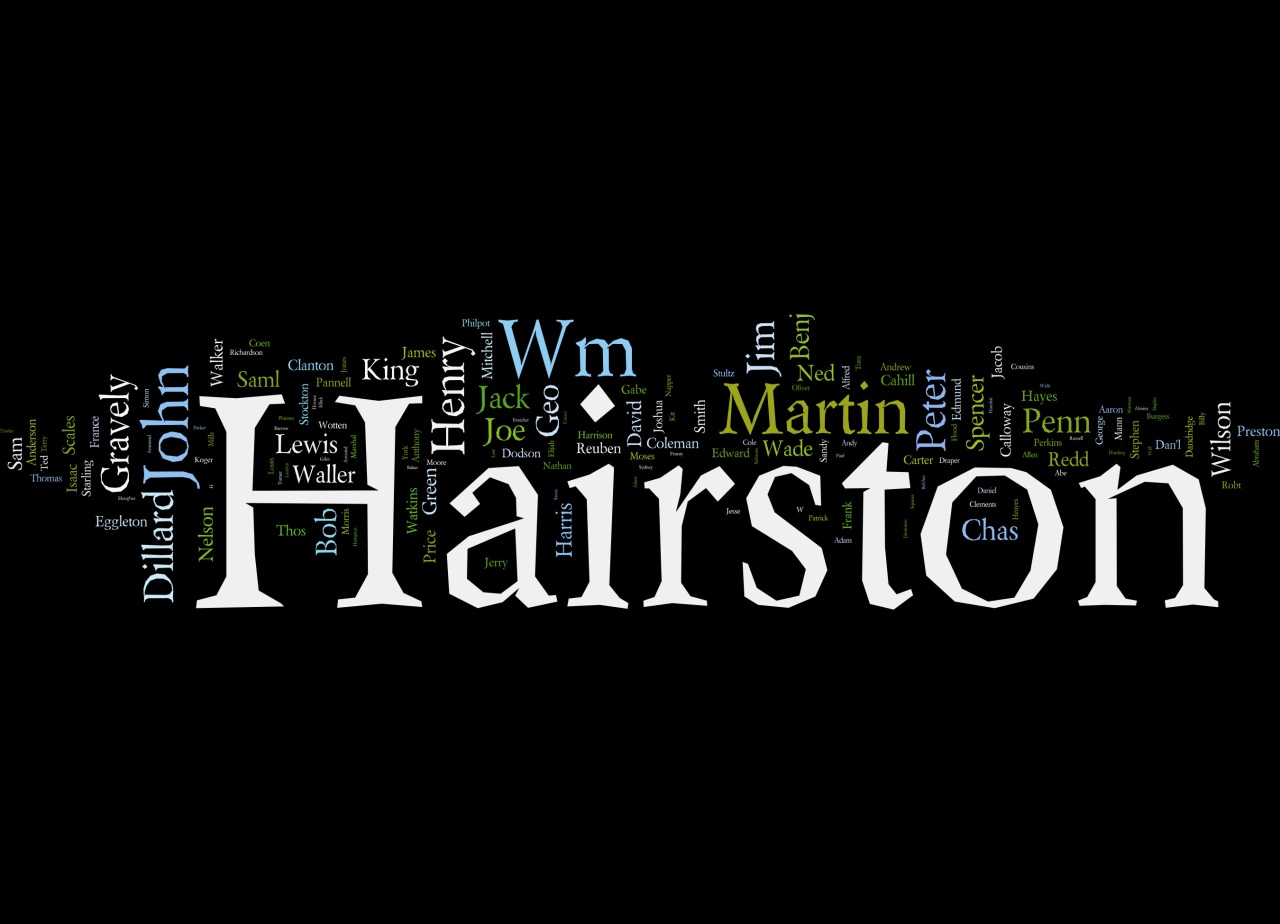 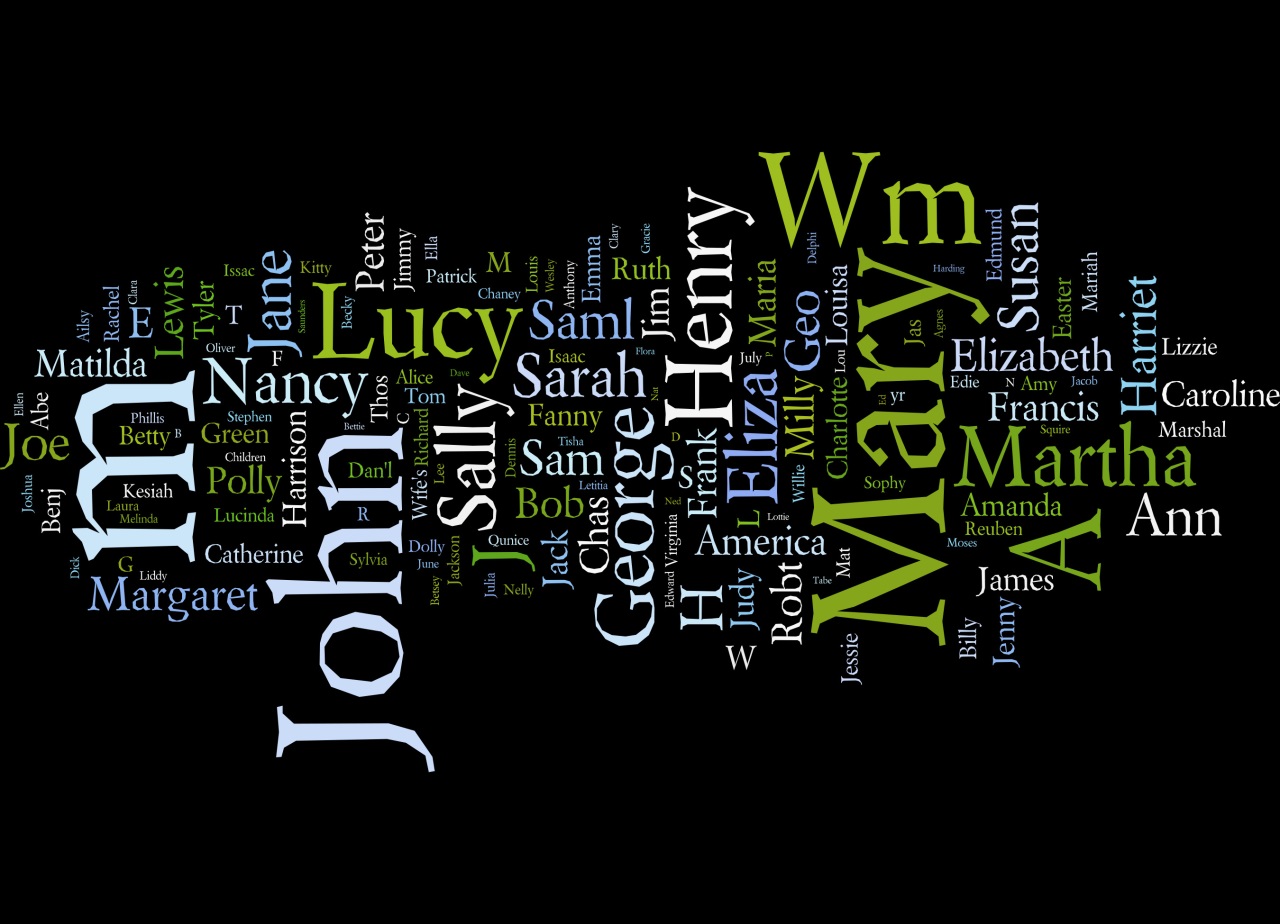 This is just a taste of some of the excellent academic work being done around African-American naming practices under slavery and immediately after, to which we hope to contribute the sources here at the Library of Virginia. The pages of the Henry County Cohabitation Register are scanned from the microfilm and difficult to read. We have transcribed all the names and checked hard-to-read ones against census records to provide the most accurate information possible.