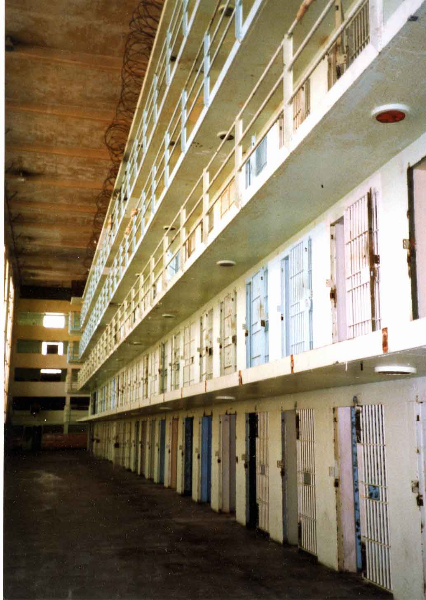 Sterilization at the Virginia State Penitentiary

The genesis of this post came from reading Paul Lombardo’s 2009 book, Three Generations, No Imbeciles:  Eugenics, the Supreme Court and Buck v. Bell.  My curiosity about Virginia’s eugenics program (1924-1979) was sparked by legislation in the Virginia General Assembly to compensate victims of this policy, and the Library of Virginia’s collections of archival records from Central Virginia Training Center and Western State Hospital, both including sterilization records.

While reading Lombardo’s book, I was surprised to learn that Dr. Charles Carrington, surgeon to the Virginia State Penitentiary from 1900 to 1911, involuntarily sterilized 12 inmates between 1902 and 1910.  Carrington revealed his “work” in a series of articles in the Virginia Medical Semi-Monthly in 1908, 1909, and 1910.  Carrington’s actions occurred over a decade prior to the passage of the Virginia Eugenical Sterilization Act of 1924.  While Carrington’s articles did not include the names of the prisoners he sterilized, I was able to identify 10 of the 12 using the penitentiary medical records.1  Nine of the 10 were black; seven of 10 were admitted to mental hospital while incarcerated.  In 1910 Dr. Carrington asserted that ten of the twelve were “insane, consistent masturbators” and after sterilization “every case [of] masturbation has ceased [and] the patients have invariably improved mentally and physically.”  The intent of this post is not to provide a historical overview of eugenics in Virginia.  Paul Lombardo and Gregory Dorr have already done that.  It is to recognize and identify some of the practice’s previously unknown victims.  These are their stories. 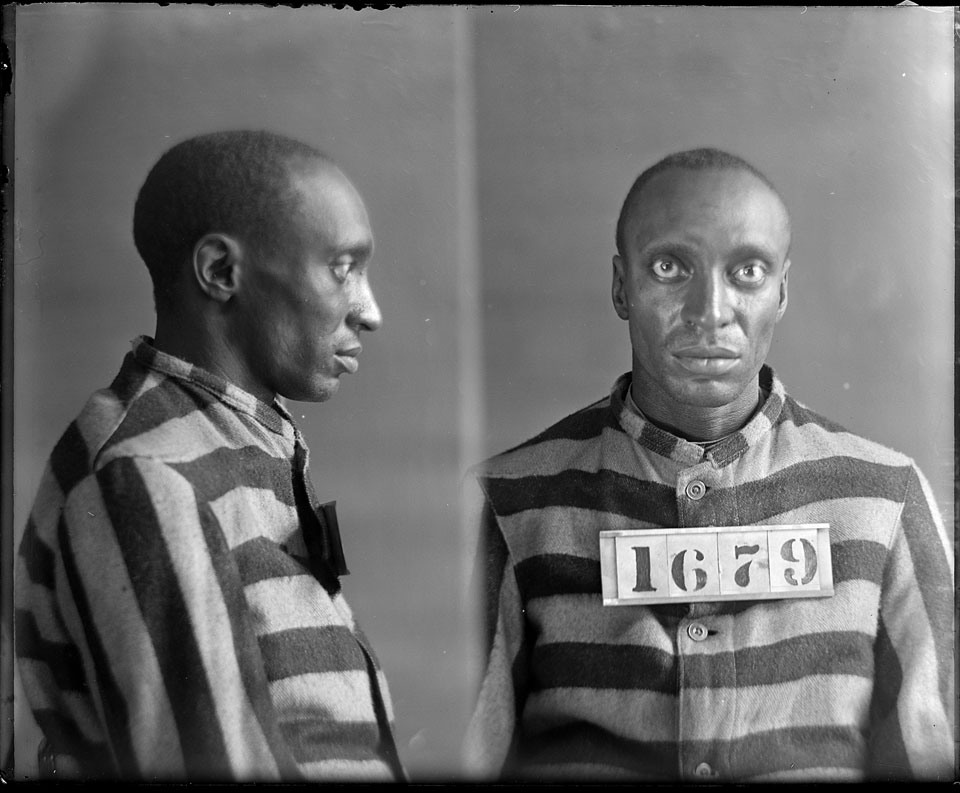 Hiram Steele, born ca. 1873 in Tazewell County, had a long history of mental illness and violent behavior.  At the December 1892 term of the Tazewell County Circuit Court, Steele was convicted and sentenced to one year in the Virginia Penitentiary for the malicious shooting of Carrie Rose the previous August.  In February 1895, a little over a year after his release from the penitentiary, Steele was declared insane and sent to Central State Hospital in Petersburg.  This would be the first of many commitments for Steele.

On 26 October 1896, Steele killed Mary Nash, a black woman, with a gunshot to the head.  He pled guilty to second-degree murder and was sentenced to 10 years in the penitentiary.  Trial records and newspaper accounts provide no further information on the circumstances of the murder or Steele’s motive.

Steele’s mental illness may have been a factor.  While being transported to the penitentiary in March 1897, Steele attempted to bite other passengers on the train.  In April, he became, according to the Tazewell Republican, “a raving maniac” and was sent to Central State Hospital.  Over the next five years, Steele would be sent back and forth between the prison and hospital with neither institution wanting to be responsible for him.

During his next commitment (September 1897 to February 1899), Steele killed a hospital attendant.  In December 1898, Central State Superintendent Dr. William Drewry declared Steele cured and ready to return to the penitentiary.  However, the penitentiary didn’t want Steele back.  Reluctantly, Superintendent George Helms sent a guard to get him.  When the guard arrived, the Richmond Times reported on 21 December 1898, “[Steele] kicked, raved, foamed at the mouth and yelled in a most unearthly sort of way.”  Steele stayed at the hospital.  “It is needless to say,” the Times stated, “that there was joy at the penitentiary.  Nobody there wanted [Steele] back.  His former cell mate was the happiest man of all for he has seen enough of [Steele], whom he regards as the craziest man on earth.”

In September 1899, Steele escaped from Central State Hospital.  He was recaptured in Bristol, Virginia, in March 1901 and returned to Central State.  He wasn’t there long.  In April 1901, Steele escaped again; he wasn’t caught until June 1902.  During a brief return to the penitentiary, Dr. Carrington sterilized Steele in September 1902.  Carrington, in his 1908 Virginia Medical Semi-Monthly paper gave a lengthy justification for his surgery by comparing Steele to a wild animal:

This poor creature at this time was the wildest, most violent, and most homicidal devil I have ever dreamed of seeing.  He was also the fiercest, most consistent masturbator I ever heard of; as strong as a bull, as cunning as a hyena, and more ferocious and quite as dangerous as a Bengal tiger.  I determined to tame him, and under general anesthesia, sterilized him.  Today, nearly six years later, he is a slick, fat, docile prisoner, a trusty about the yard – cured by sterilization.

Carrington neglected to mention that Steele was declared insane in December 1902 and sent to Central State for an undetermined length of time.  Steele was discharged from the penitentiary on 22 June 1910.  His fate is unclear.  According to 1920 and 1930 census records, he may have moved to McDowell County, West Virginia, to work as a miner. 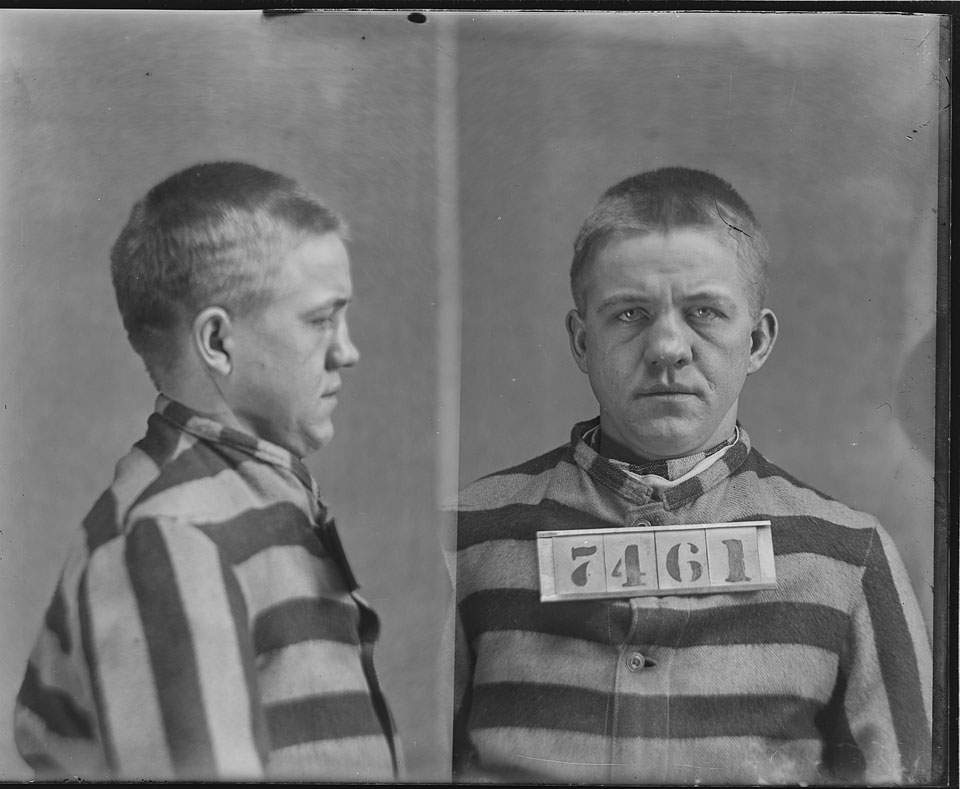 Photograph of Moscow Savage, No. 7461

Moscow Savage, born ca. 1885 in Russell County, was convicted, along with Al Burton (both white), of second-degree murder in the death of Sam Alderson (black).  Savage received a 28-year sentence.  He twice made brief escapes twice from the State Farm in Goochland County in 1910 and 1912 before being recaptured.  Savage had a terrible prison record and was refused a pardon in 1913 and 1914.  In a 14 June 1913 letter to Susan Savage, Moscow’s mother, Governor William Hodges Mann elaborated on his decision.  “I am sorry to have to say to you that your son,” he wrote, “is one of the worse [sic] convicts in the Virginia Penitentiary.”  Mann added that “we…have done everything possible for him, but he does not seem to appreciate any kindness or be willing to respond to any efforts we make on his behalf.” 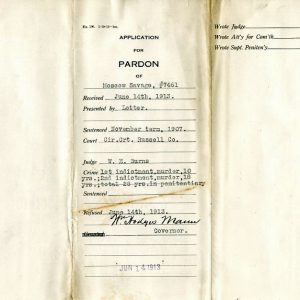 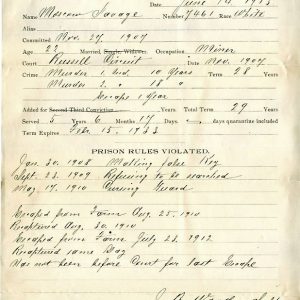 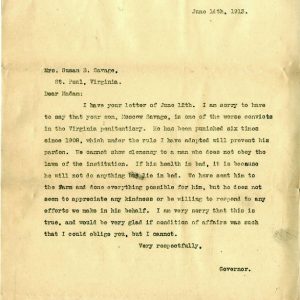 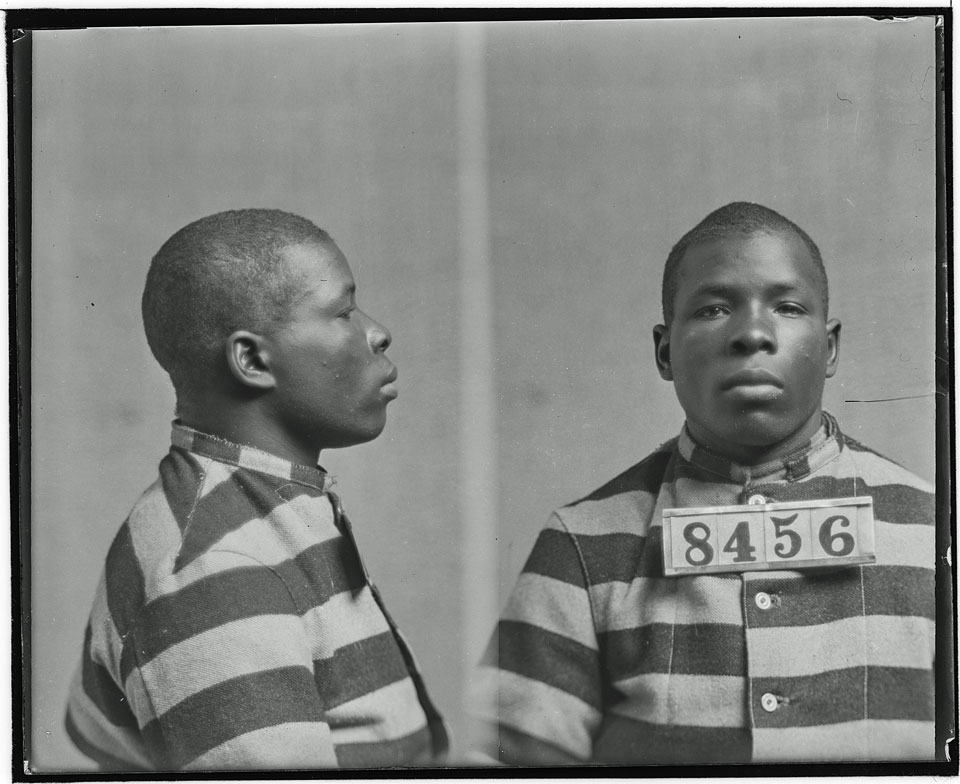 On Saturday 5 December 1908, Mrs. Eugene Howard did some shopping.  As she returned to her Caroline County home, Frank Baylor, a 19-year old black man, grabbed Howard and dragged her into the bushes and attempted to assault her.  Howard’s 9-year-old daughter heard her mother attempt to cry out and screamed, scaring Baylor away.  Baylor was caught quickly, tried and convicted of criminal assault in Caroline County in February 1909, and sentenced to 18 years in the Virginia Penitentiary.  Baylor was sent to Central State Hospital on 16 May 1910.  He died there on 15 November 1918 from pulmonary tuberculosis. 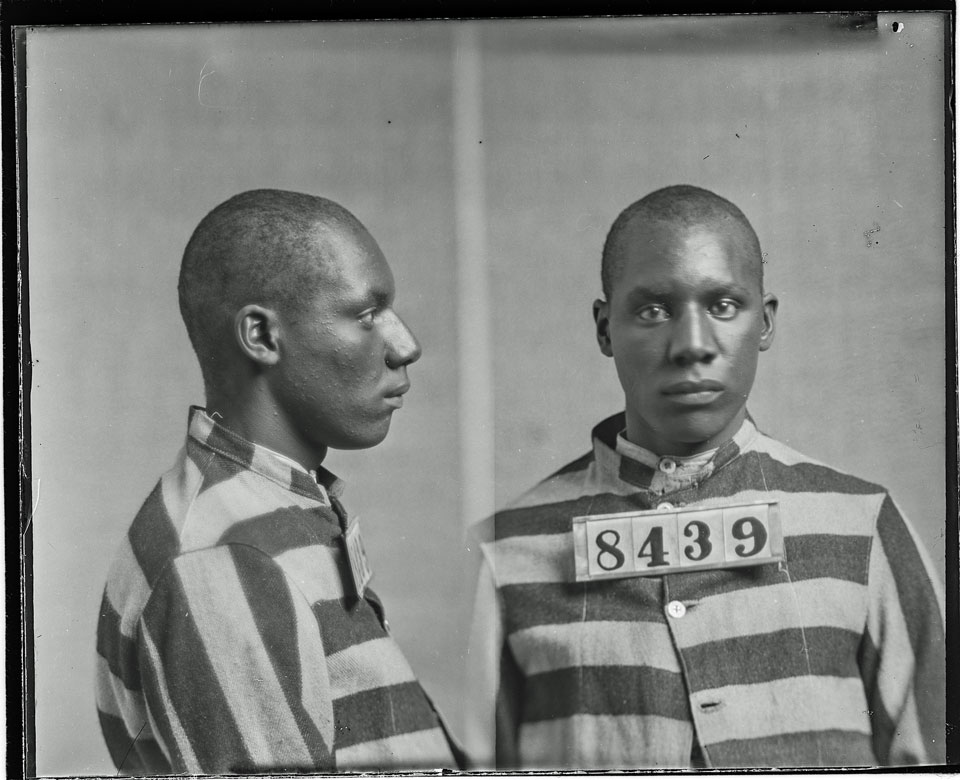 Photograph of Richard Mills, No. 8439

Twenty-one-year-old Richard Mills shot and killed his brother Columbus Mills during a craps game on the night of 21 November 1908.  Mills was convicted of murder in Pittsylvania County in January 1909 and sentenced to 16 years in the penitentiary.  He was taken to Central State Hospital on 9 January 1914 for an indeterminate stay.  He was discharged from the penitentiary in 1921. 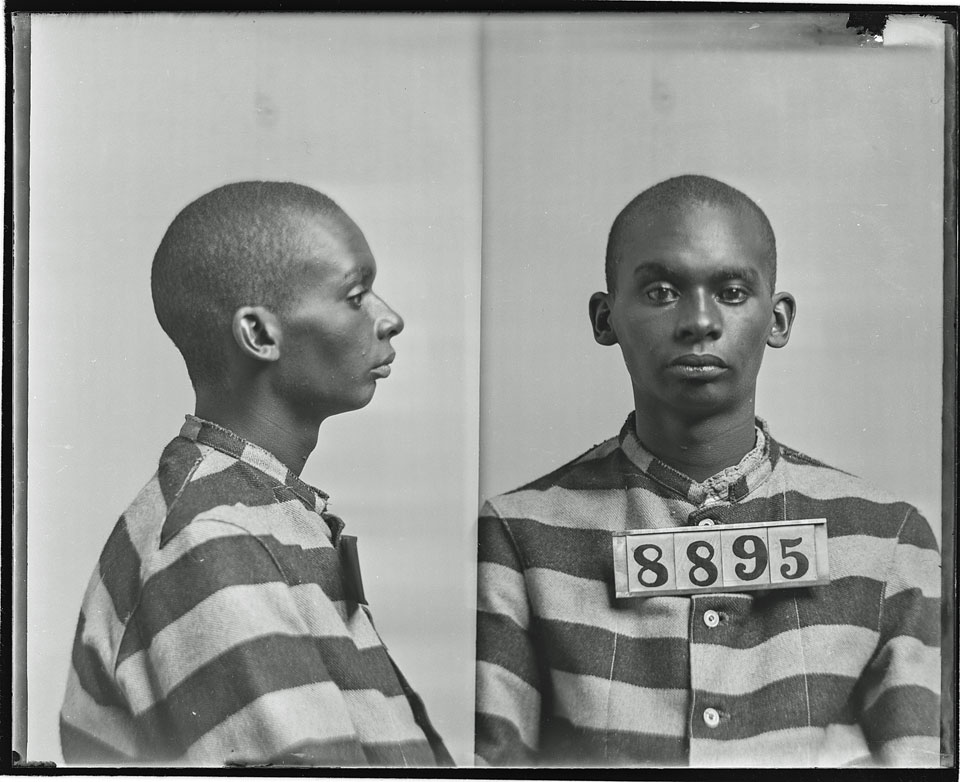 In July 1909, Chris Hayes, 22 years old, was sentenced by the Norfolk City Circuit Court to 18 years in the Virginia Penitentiary for attempted rape.  He was briefly transferred to Central State Hospital for six weeks in the spring of 1910.  Hayes died at the State Farm in Goochland County on 26 April 1921.  The cause of death was pulmonary tuberculosis. 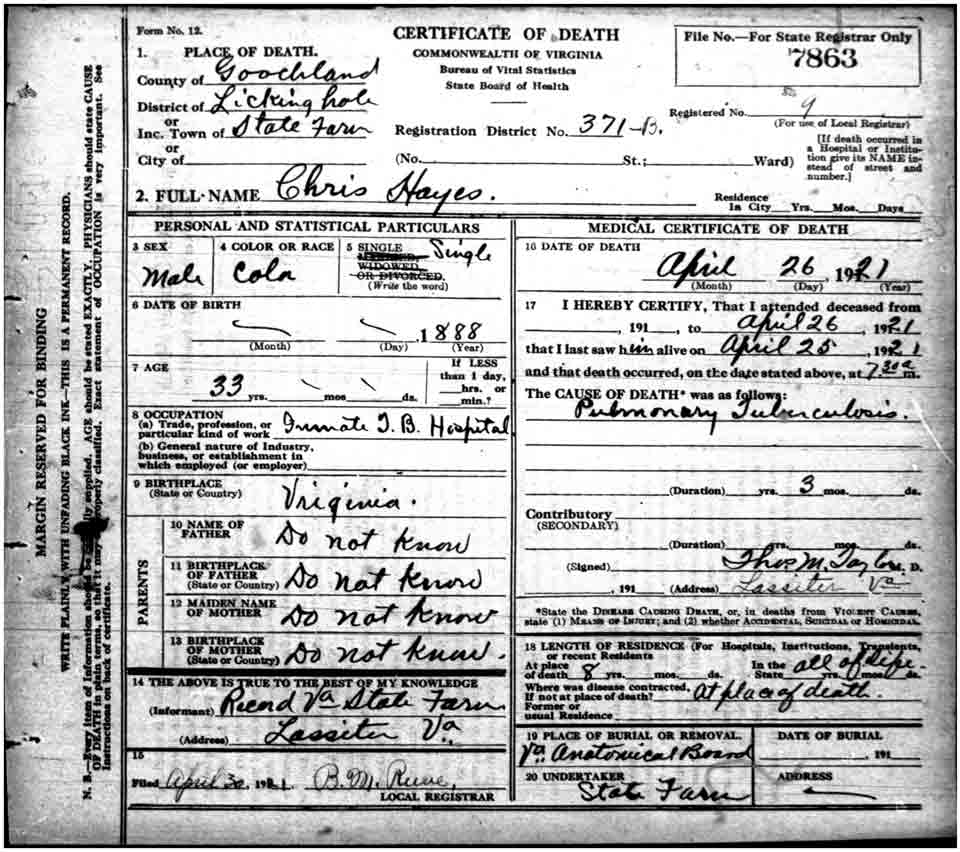 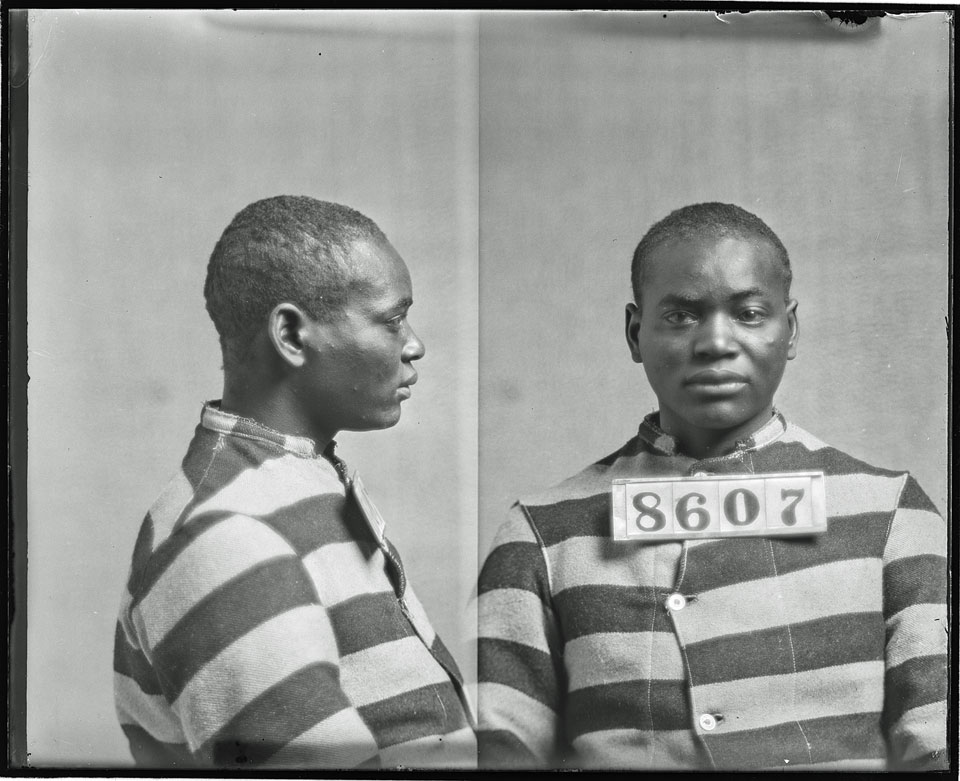 Very little is known of Scott.  He was convicted of housebreaking in Bedford County in March 1909 and sentenced to two years in the penitentiary.  Hayes is the only recidivist of the sterilized prisoners.  He received a five-year sentence for house breaking and larceny in Amherst County in October 1915.  Hayes died of pneumonia on 18 March 1917 in State Convict Road Camp 18. 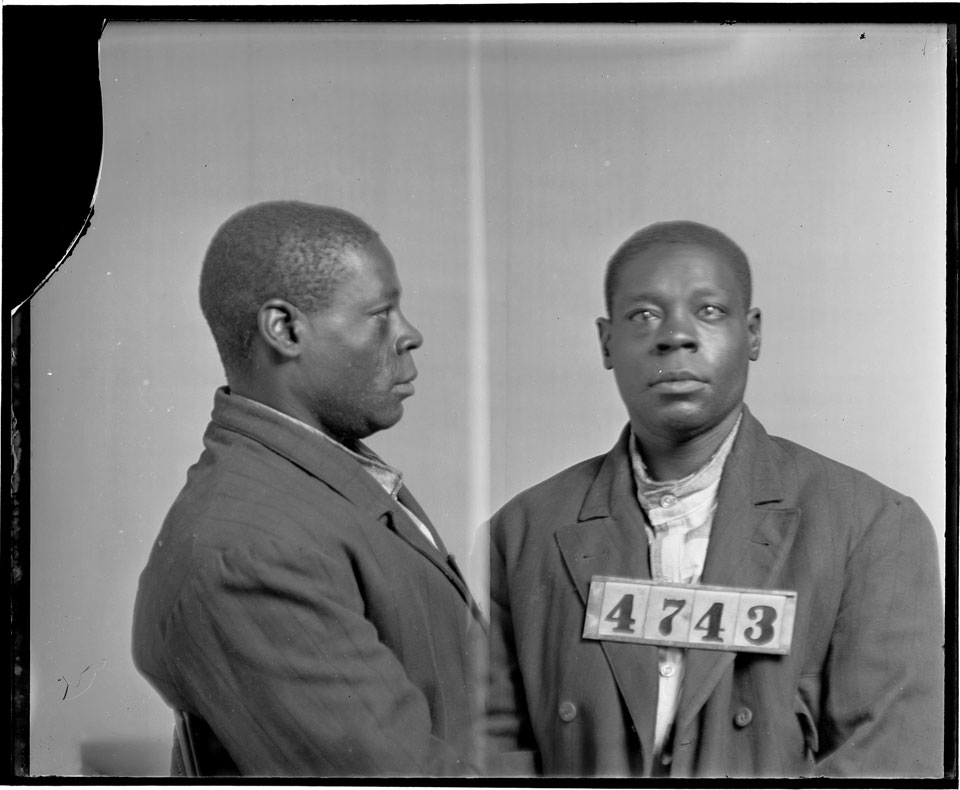 Photograph of William Bonner, No. 4743

In early 1903, William Bonner killed Toney McLoud with an axe.  For the crime of second-degree murder, the Brunswick County Court sentenced Bonner to 16 years in the penitentiary.  Bonner was in Central State Hospital for several months in 1910.  He was discharged from the penitentiary on 23 June 1916. 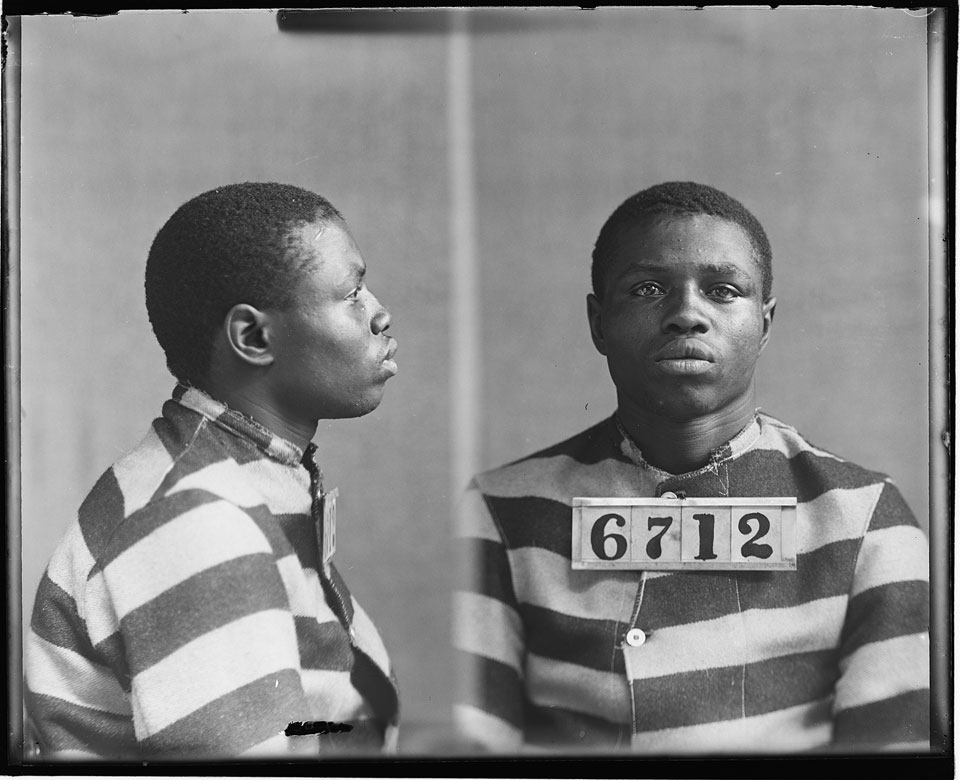 Photograph of Marshall Robinson, No. 6712

Marshall Robinson, 27 years old, received a ten-year sentence for malicious wounding in Richmond City Circuit Court in July 1906.  Shortly after his sterilization, Robinson was sent to Central State Hospital.  There is no record of him being transferred back to the penitentiary. 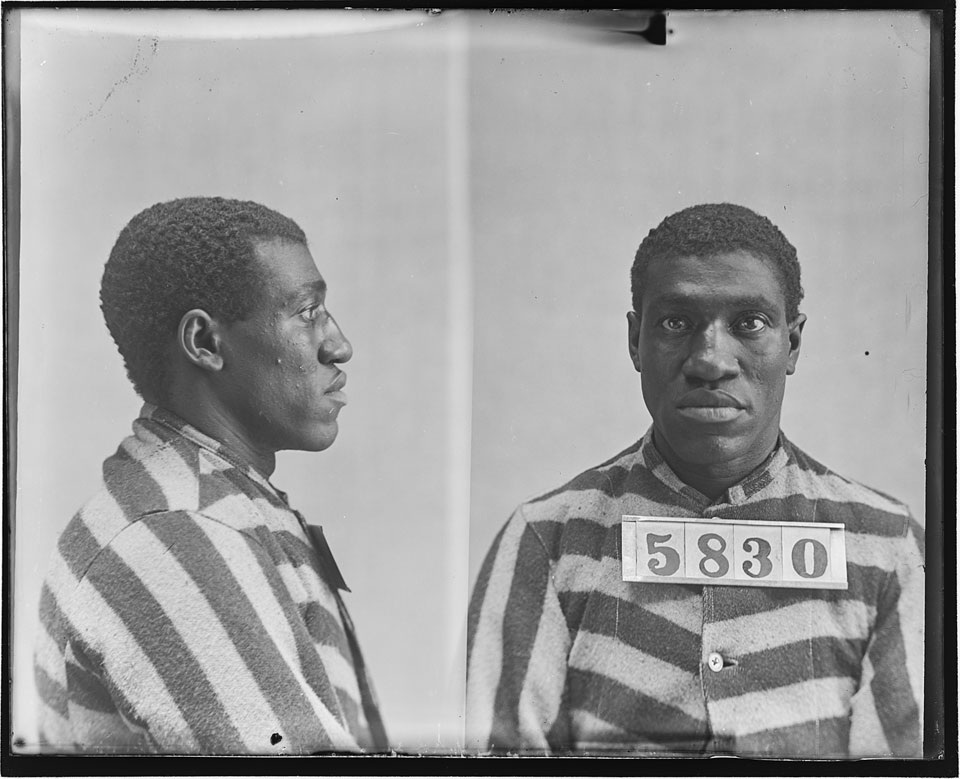 Photograph of William Carter, No. 5830

William Carter’s first felony conviction occurred in Clarke County in 1898, where he was sentenced to five years in the penitentiary for robbery.  Carter returned to the penitentiary in February 1905 following his conviction in Loudoun County for malicious shooting.  He was discharged on 26 April 1911, five months after his sterilization. 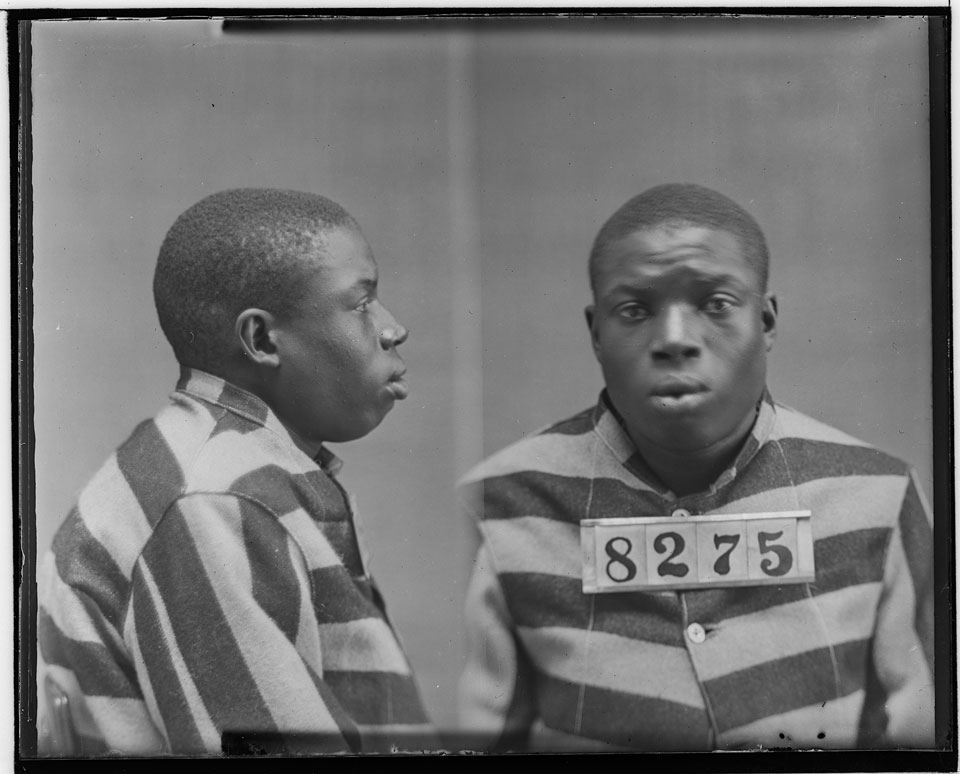 Joe White was convicted twice in Norfolk City of housebreaking.  During his first sentence (1903-1908), White was declared insane and sent to Central State Hospital from 15 July 1907 to 30 September 1907.  After his sanity was (legally) restored, he completed the remainder of his sentence and was discharged in August 1908.  Freedom was short-lived.  White returned to the penitentiary in November 1908 following his second conviction.   He was released in 1915.

Dr. Carrington’s tenure as surgeon to the Virginia Penitentiary ended in the fall of 1911 when he was not re-appointed by the Penitentiary Board of Directors.  Dr. Herbert Mann, nephew of Governor William Hodges Mann (1910-1914), was appointed.  With Carrington’s departure, the practice of sterilizing prisoners illegally at the penitentiary ended.