W.C. and Earl and the Popular Girl: The Virginia Yearbook Project

In the summer of 2012, the Library Development and Networking Division started a project that included loaning scanners and computers to Virginia libraries in the hope of bringing to light hidden local history collections housed in public libraries. These collections hold items of local interest and historical value, and many of these items are unique to their region or locality. This project was started and continues to be funded with grants provided by the Library Services and Technology Act (LSTA). The Institute of Museum and Library Services (IMLS), whose mission is to create strong libraries and museums that connect people with ideas, administers LSTA funds.

A team of Library of Virginia staff traveled to public libraries to deliver the scanners and peripheral equipment, providing training on using the equipment, guidance on organizing materials to be digitized as well as file-naming conventions, and conducting an assessment of items to determine their value for scanning. 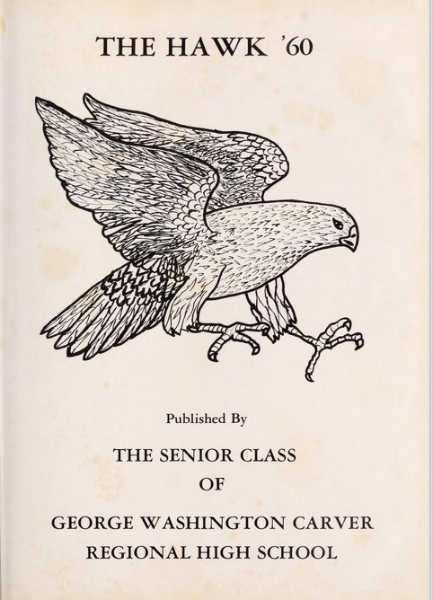 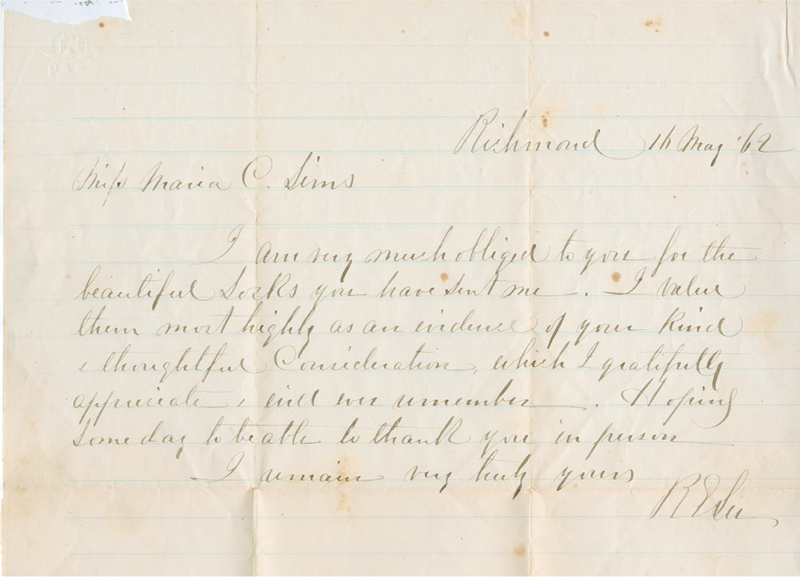 In August 2012, the LVA team visited the Halifax County South Boston Public Library. As part of the discovery process, the team was told about a safe located in the local history room of the library. While library staff believed that this safe might contain some important documents that should be scanned, no one had been able to open the safe even with instructions provided. Luckily, LVA’s former Local Records Director (and amateur safe-cracker) Carl Childs was able to decipher the instructions and open the safe. Inside, staff was very pleased to discover an item of local historical significance–a handwritten letter from Robert E. Lee thanking Maria Sims for a gift of “beautiful socks”.

Once the pilot project of scanning materials at 11 libraries was completed, it became evident that school yearbooks made up the bulk of the scanning at the local libraries.

Staff at LVA discussed this finding and contacted Lyrasis and the Internet Archive. The LVA had worked with these two organizations previously on digitizing and making accessible Game and Inland Fisheries’ Virginia Wildlife publications as well as rare books from the Library of Virginia collections.

Virginia public libraries were then surveyed to gauge their interest in scanning yearbooks. Libraries filled out a spreadsheet with information to send back to LVA, including the number of pages of each yearbook, dimensions, etc., to determine if we had enough material to digitize. We only considered digitizing up through 1977 due to copyright issues.

The first yearbooks received, digitized and made available online came from the Pulaski County Public Library. Currently twenty-two other libraries are participating in this project.

Susan Keller, Library Director for Culpeper County Public Library, informed me of some very significant yearbooks available at the Orange County African American Historical Society. I met with the director of the historical society and they donated 17 issues of the Hawk yearbook to the project. The majority of the 17 yearbooks were from the estate of Alease Scott Hubb, a retired teacher who taught at George Washington Carver High School.

The Hawk yearbooks document a school that was founded in Rapidan, Virginia.  Before the school was started, African American students had limited educational opportunities beyond seventh-grade. In 1946 representatives from the counties of Culpeper, Madison, Orange, and Rappahannock requested and received state funds to build a regional high school for African American students in Rapidan, between Orange and Culpeper. On 1 October 1948, the George Washington Carver Regional High School opened its doors to 452 students, 14 teachers, and numerous other staff members. The school remained open for 20 years, educating approximately 2,500 students before closing in 1968 when Virginia’s public schools were desegregated.1

The Hawk yearbooks can be viewed here.

I encourage everyone to view the yearbooks that this project has made available online; whether for historical research, curiosity or just for fun, you never know what you will find in old yearbooks. I went home and looked at some old yearbooks my mother had saved and found one from 1962 (Cavalier, New Kent High School) where my middle sister, Elaine, had been in the fourth grade. 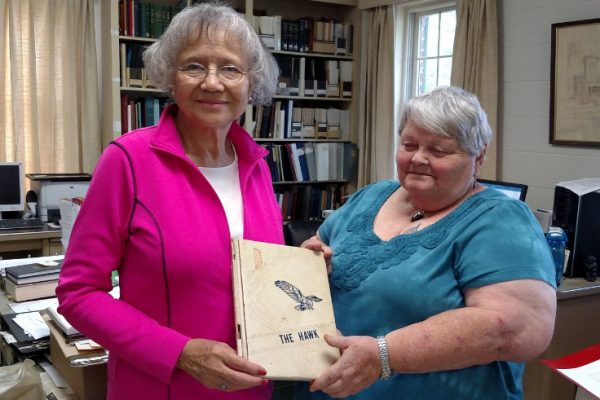 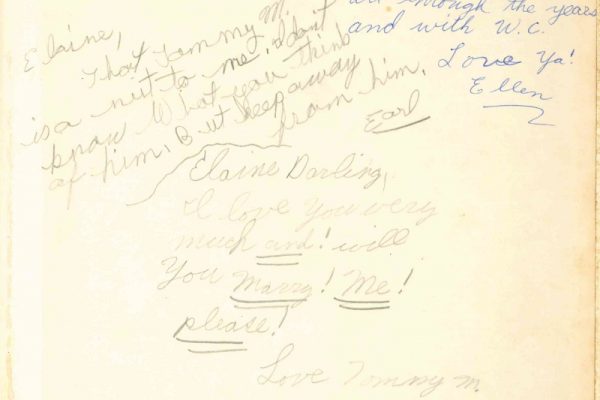 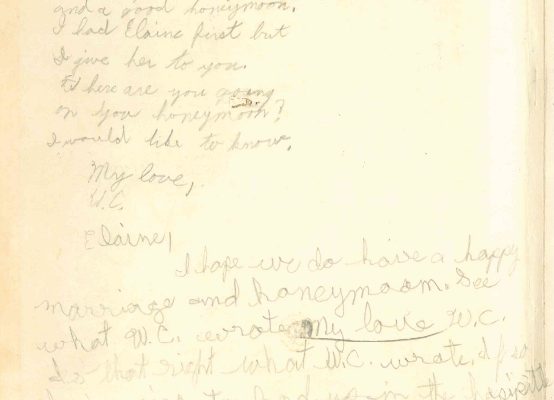 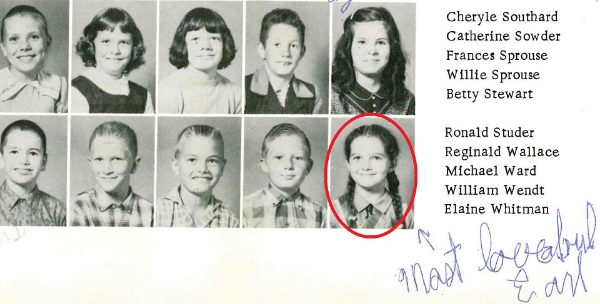 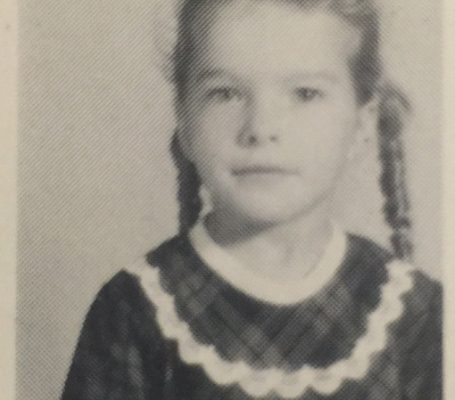 Surprisingly for the fourth grade, some very serious marriage proposals and fighting beaus were part of the scenario. There appeared to be a love triangle between an old boyfriend, W.C. and two new boyfriends, Tommy M. and Earl.

”Elaine, That Tommy M. is a nut to me. I don’t know What you think of him, But keep away from him.

”Elaine Darling, I love you very much and! will You Marry! Me! please!

”Dear Elaine, I hope you and Earl have a good merrege and a good honeymoon. I had Elaine first but I give her to you [Earl]. Where are you going on your honeymoon. I would like to know. My Love,

”Elaine, I hope we do have a happy marriage and honeymoon. See what W.C. wrote My love W.C. Is that right what W.C. wrote. If so he is going to land up in the hosipitle. Your Love,

I don’t know what happened in fifth grade or beyond. I do know that Elaine didn’t marry Earl, W.C. or Tommy, but hopefully they all found other Elaines to spend their lives with (and no one landed up in the hosipitle!).

Please enjoy the results of our yearbook digitization project.  We’d appreciate any feedback or stories you’d like to share. 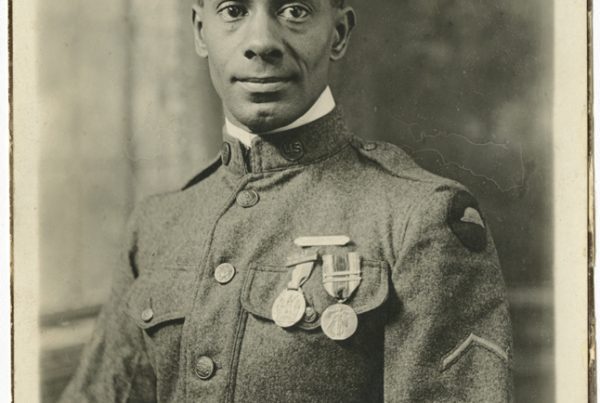