Virginia Suffrage News was a monthly newspaper published by the Equal Suffrage League of Virginia. Beginning with its first issue in October 1914, the paper aimed to link the many suffrage leagues throughout the Commonwealth in their common mission of acquiring the right to vote for women.

This goal was summed up in a foreword to the first issue by Lila Meade Valentine: “For this is pre-eminently a cooperative movement- one in which good teamwork is required- one in which we must all pull together with a right good will. To do this effectively, we need the stimulus of the exchange of ideas, we need to inform ourselves of the activities of our local leagues, as well of the larger movement outside. [The Virginia Suffrage News] should bind us together in one harmonious whole.”1 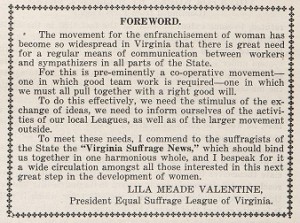 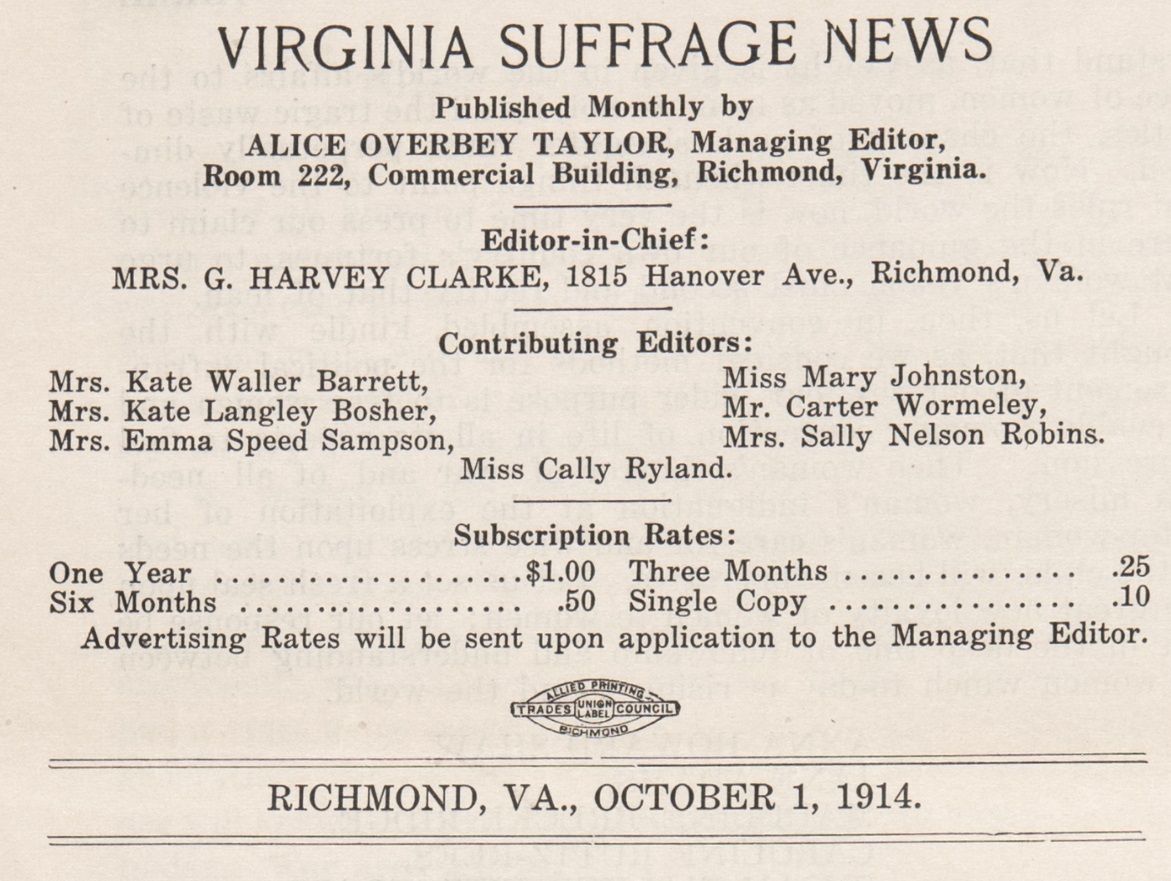 The paper followed a consistent format. Each issue contained editorials, dispatches from the various Virginia suffrage leagues, national news items relating to women’s suffrage, and information regarding both past and upcoming suffrage lectures and conventions.

The first issue featured as its cover story a lengthy editorial from then-Secretary of State William Jennings Bryan on his support for the suffrage movement, saying, “I shall ask no political rights for myself that I am not willing to grant to my wife.” Bryan used his editorial to refute common arguments used to deny women the vote. His overarching theme was that women have a God given purpose to have and raise children, and with the vote, “the mother can justly claim the right to employ every weapon which can be made effective for the protection of those whose interests she guards.” He ends with the sensible thought “if the political world has grown more pure in spite of the evil influences that have operated to debase it, it will not be polluted by the presence and participation of women.” 3 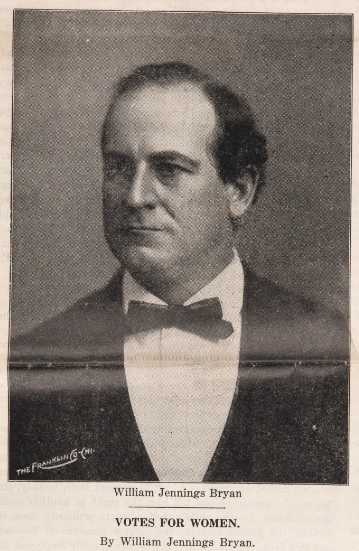 In general, it was the opinion of the editors of Virginia Suffrage News that, if allowed to vote, women would vote on the side of morality. The Virginia Suffrage News stressed in each issue the major reasons they believed women should have the right to vote, and illustrated the importance women’s votes could have on major issues of the time, including temperance, the labor movement, and a push for taxpayer-funded compulsory primary education.

One consistent theme throughout the pieces in Virginia Suffrage News was that with the vote, women could better protect the interests of their children. The fight for compulsory public education was a timely example of an issue women were passionate about and felt they deserved a say in. The Equal Suffrage League vocally supported compulsory education; its editorials and its

work organizing for the cause were noted in an October 30, 1914 Times Dispatch article. In the second issue of Virginia Suffrage News, Mary Pollard Clarke wrote, “There are only six States which have no compulsory education law, and they are Southern States.  Should not the women, the mothers of the south, be interested in this condition to help and correct?” Clarke called on all women, even those who were not mothers, to “look after these children whose parents are neglecting them” by denying them an education.4

Emphasizing the notion that women would vote for all that is morally just was the optimistic opinion that women voting would bring peace to the nation and the world. It is strongly implied that after gaining suffrage, women could end all war. In “Women and War,” Annie B. Whitner declared that with the vote, “women will share with men the power which shapes the fate of nations. And then that ‘hell upon earth’ –war– will cease, and peace will reign.”5 Whitner was not alone in this belief.  In the previous issue, Mary Johnston’s piece “These Things Can Be Done” made a similar assertion, arguing that if women had been allowed to vote over the course of history, war might have long ago ended.6