T he Virginia Land Office patents and grants comprise an invaluable grouping of original landownership records for the Commonwealth. The Library of Virginia has indexed and digitized the patents and grants for online use. The General Assembly established the Land Office by an Act of Assembly on 22 June 1779, allowing potential owners to obtain unappropriated lands by payment to the treasurer. The fee was set at £40 per 100 acres. A treasury warrant was provided and a survey was completed to divide up the designated land. As part of this treasury warrant process, the purchaser could assign or sell their right to part or all of the land described in the warrant. These assignments and other papers related to individual grants after 1779 were filed as plats and certificates, and the originals are held at the Library, organized by the date of the grant and the name of the grantee. The final step of the process was recording the actual land grant into the clerk’s grant book, and awarding the grantee their own signed copy. Although the steps for issuing a Virginia land grant sound open and shut, on occasion the process could become a bit more complicated. 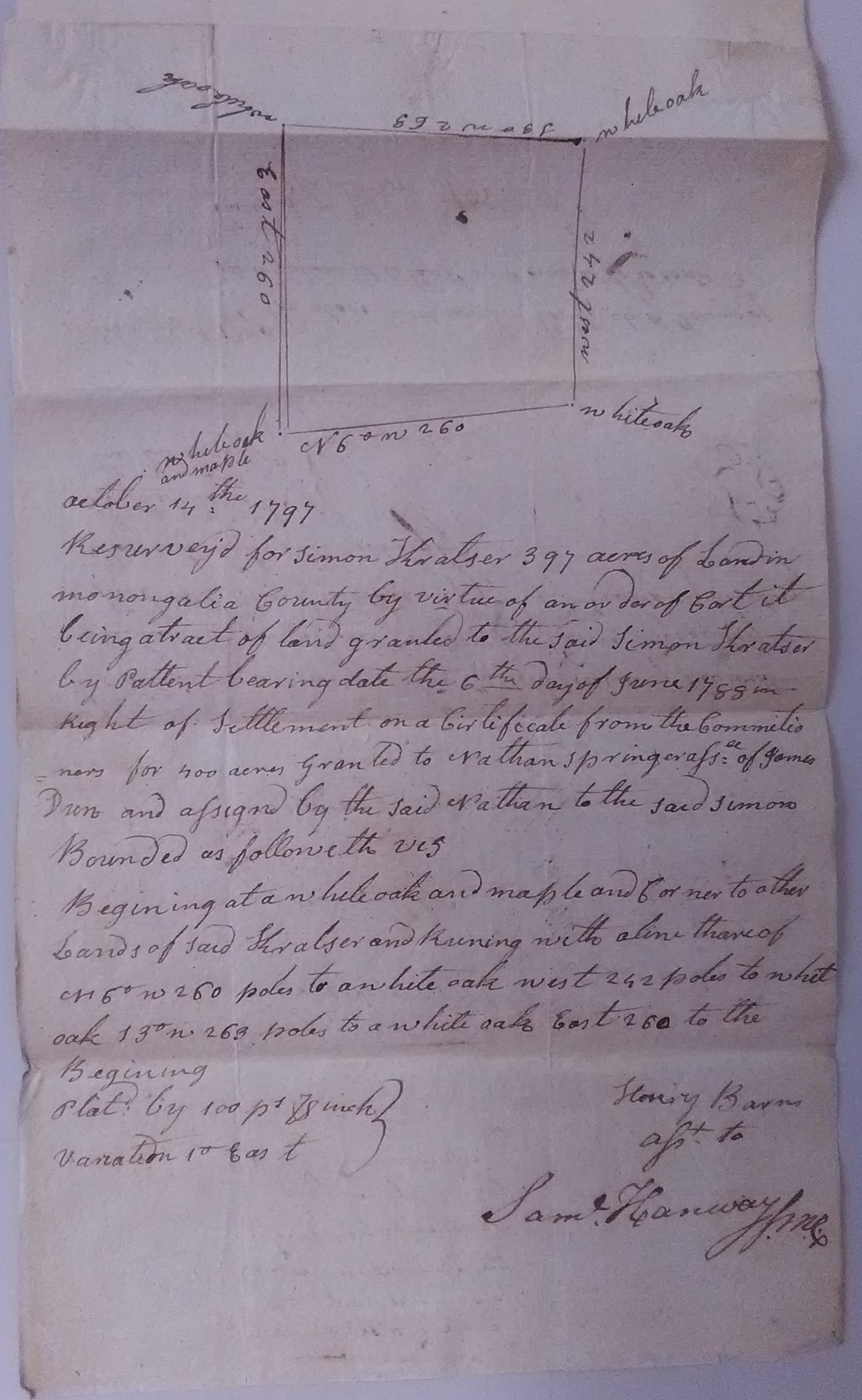 In the case of Simon Kratzer of Monongalia County, his Virginia Land Grant, dated 6 June 1788, was a little tricky to track down. Kratzer’s German-origin name continuously appeared with differing spellings, most likely due to phonetics and mispronunciation. Kratzer originally immigrated to Frederick County, Maryland, in 1771 from Bavaria, receiving a Maryland Land Grant for 100 acres in Snowballs Valley. By 1788, Kratzer had moved to Monongalia County after purchasing a treasury warrant for the right to settle land previously assigned to Nathan Springer, an assignee of James Dun.

By 24 August 1799, the land changed hands again, when it was assigned “by the said Commonwealth unto David Dunham assignee of Samuel Kratser, who was assignee of Simon Kratser, a certain tract or parcel of land, containing three hundred and ninety-seven acres, formerly granted unto the said Simon Kratser.” The original grant, dated 6 June 1788, was issued to Simon Kratzer for 400 acres, as stated in Dunham’s recorded grant with the slight spelling alteration of Kratser. This indicates that Simon Kratzer initially held title to the land. The assignment and other papers related to Simon Kratzer’s land were filed with the plats and certificates under David Dunham’s name and the date of his grant.

David Dunham’s file of plats and certificates were beneficial in tracking down the elusive grant of Simon Kratzer, which did not appear to be in the Library of Virginia’s searchable database. The assignment of Simon Kratser and Joseph Kratser to “issue” Samuel Kratzer on 15 October 1797, and then Samuel Kratzer to David Dunham on 19 November 1798 was clearly noted on the plat. The original land grant in vellum to “Simon Seratiker or Scratiker” was found along with the plat. 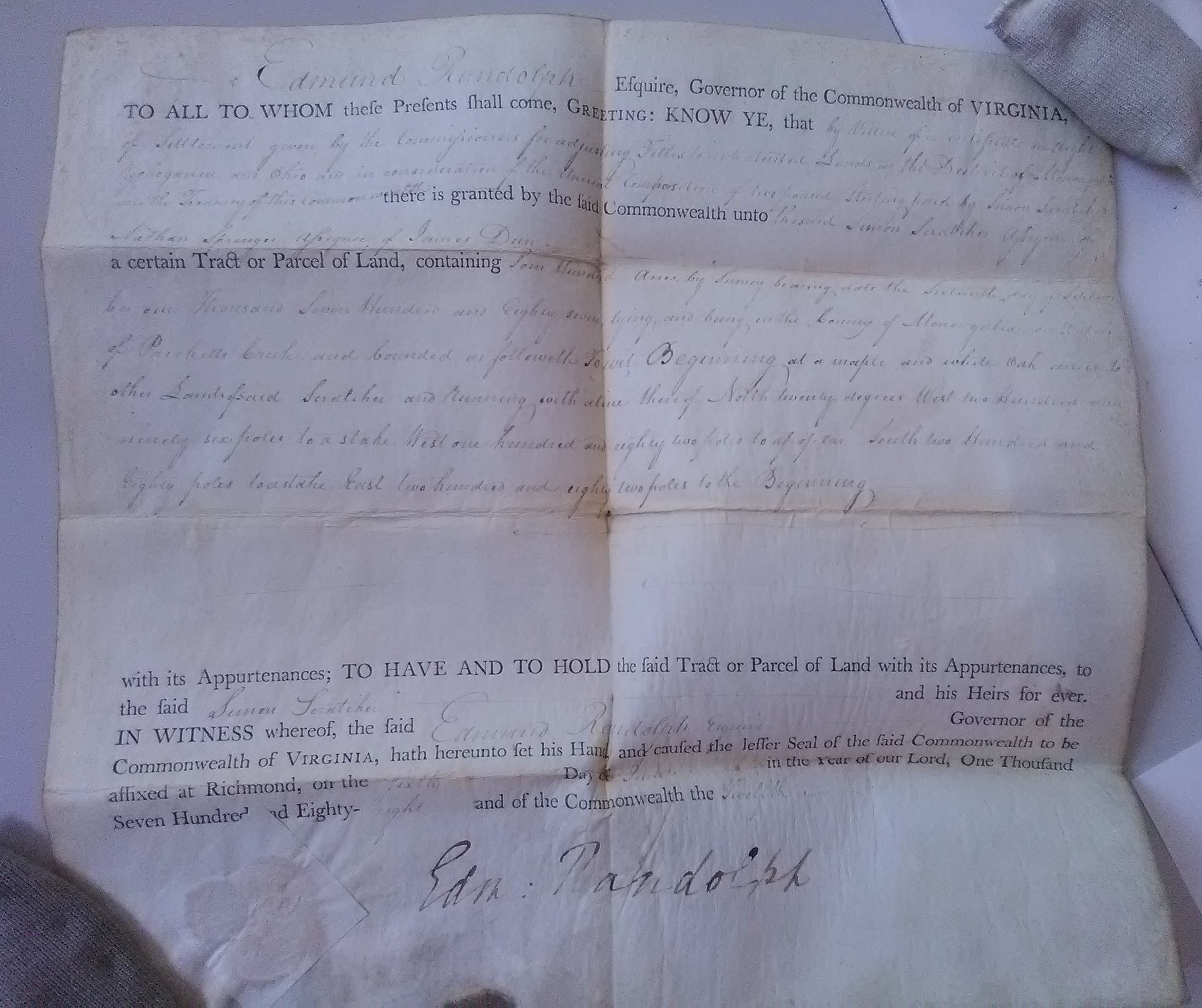 This misspelling of Kratzer’s name was clearly made by the clerk of the Land Office. A new search of the Library of Virginia’s Land Office Patents and Grants database yielded the missing grant of 400 acres to Simon Seratiker dated 6 June 1788, as well as a second grant of the same date for 300 acres.

Kratzer held other land in Monongalia County as well, spelled under the name “Cratser.” He obtained a separate grant for that land on 8 November 1799 for 261 acres “bounded as followeth to wit beginning at a white oak and running with a line of William Robinson’s.”

A lesson learned here by the researcher: when looking at original records try different searches and look at less obvious records! Make sure to be alert to spelling variations as names can be spelled a number of different ways. Exact spelling did not matter. Phonetics and misspellings tended cause clerks and others to alter names or sometimes simply to “Americanize” them, as seen in the case of Simon Kratzer.