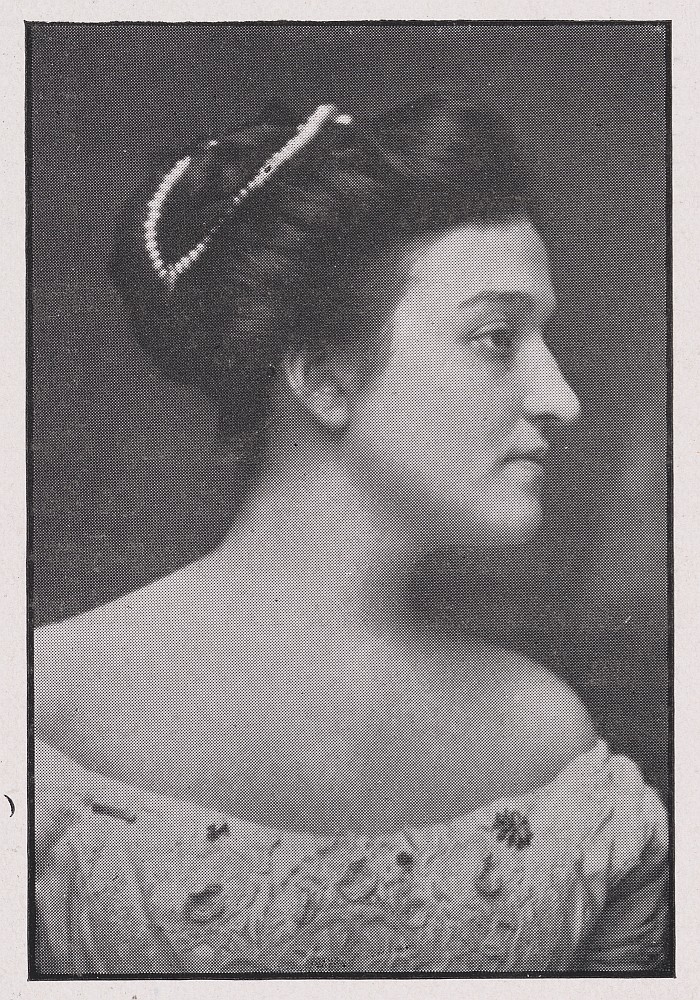 On the Road for Woman Suffrage

After founding the Equal Suffrage League of Virginia in November 1909, eager suffragists had managed to organize a few local leagues, but in 1912 the secretary concluded that the Equal Suffrage League needed to focus on “the work of active organization” to build support across the state for votes for women. How did they accomplish this? League president Lila Meade Valentine and other officers began to travel across the state, speaking and organizing local leagues. Starting in 1915, they even occasionally employed a paid organizer of the National American Woman Suffrage Association (NAWSA), of which the Virginia league was an affiliate. Some routine office documents in the Equal Suffrage League of Virginia Records provide a picture of that organizer’s work on the ground and illustrate the dedication of woman suffrage advocates in Virginia.

Three items together preserve details about the travels in April and May 1917 of NAWSA organizer Eudora Woolfolk Ramsay, better known later by her married name, Eudora Ramsay Richardson. From 1915 through 1918 she made speeches and organized suffragists in West Virginia, Tennessee, South Carolina, Pennsylvania, Oklahoma, New York, and Maine. She also worked in her native Virginia to form local chapters of the Equal Suffrage League and to educate men and women about woman suffrage.

One of the documents (click below to view) reports money Ramsay collected for the cause during her two months of organizing in 1917. Another set of documents includes her itemized expense account and her report for NAWSA that detail Ramsay’s travel in May. Fragmentary surviving records of the local Equal Suffrage Leagues she spoke to or founded fill out the record and indicate how Virginia suffragists organized and spread the word. 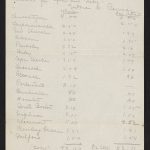 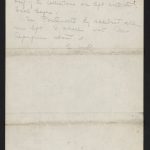 Eudora Ramsay graduated from Westhampton College in 1911, where she was ``just a few years ahead of her time`` as an advocate for equal rights and woman suffrage. The Spider (1911), Library of Virginia.

Lila Meade Valentine explained how Ramsay worked. She “goes to a perfectly new place,” Valentine informed one of her colleagues, “calls on the minister, gets the names of prominent women and before long has the meeting arranged. She spoke three or four times a day and almost every Sunday night in a church.”

Ramsay, described as an effective and dynamic speaker, began a ten day tour of Accomack and Northampton Counties on the Eastern Shore on 7 April 1917, when she addressed an audience of “about 225 (including babies)” in Chincoteague and founded a 45-member suffrage league. She spoke in Temperanceville three days later, but “no league was formed People apathetic and satisfied.” She spoke and organized leagues in New Church, Bloxom, and Parksley by April 13; another in Onley on April 14; and leagues in Franktown and Eastville on April 17. She also reorganized leagues and collected donations at Cape Charles and Onancock. As she left the Eastern Shore, Ramsay requested that state headquarters send literature and membership cards to the new officers so they could start campaigning for women’s voting rights.

Ramsay began May 1917 more than 100 miles west of the Eastern Shore. She spoke at three meetings on the first two days of the month in Nottoway County, “one meeting at a picture show with 150 people,” another with 75, the third with 25. She spent May 3, 5, and 6 working at the state headquarters in Richmond. During the night of May 3–4, she traveled by train to Scottsville to reorganize the league there before returning to Richmond on the night train. Ramsay then rode the train to Portsmouth, where on May 7 she spoke and conducted a meeting and then returned to Richmond on the train that night. She spoke twice in Richmond on May 8 and worked at the state headquarters the next day.

Ramsay spoke on May 10, in Burkeville (also in Nottoway County where she began the month), and on the following day in the town of Houston (soon thereafter renamed Halifax Court House) “at two meetings at the court house with 35 people in one and 10 in the other.” On May 12, Ramsay rented a hall in South Boston and scheduled a meeting for two days later. On May 13, in Danville she “went to church and got acquainted.” Back in South Boston on May 14, Ramsay held a meeting with 90 people in the “picture show hall.” She returned to Danville on May 15, and spoke to 85 people at the YWCA the following day. On May 17, she held two meetings and organized a league in Virgilina. Ramsay spoke in a school and at a picture show in Boydton on May 18, then on the next day she organized a league in South Hill. 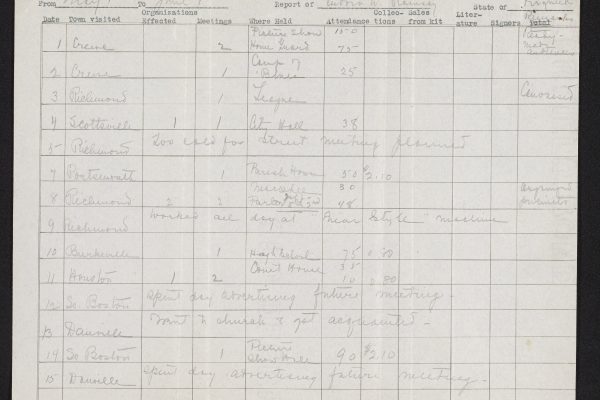 Eudora Ramsay's May 1917 report for the National American Woman Suffrage Association documents everywhere she spoke, how many meetings she held, and how many people attended. Equal Suffrage League of Virginia Records, Acc. 22002, Library of Virginia. 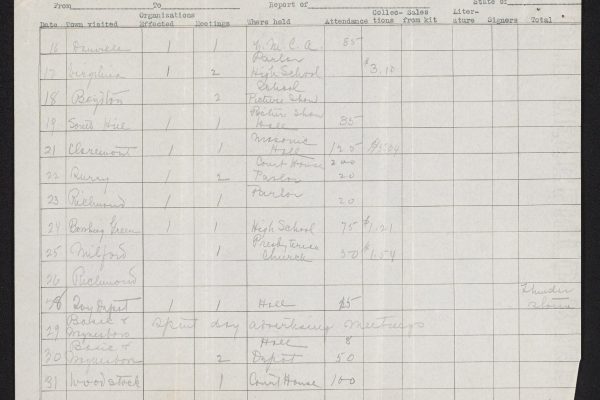 Eudora Ramsay's May 1917 report for the National American Woman Suffrage Association documents everywhere she spoke, how many meetings she held, and how many people attended. Equal Suffrage League of Virginia Records, Acc. 22002, Library of Virginia.

Ramsay’s expense account contains no entry for Sunday, May 20, when she was in Richmond. The following day, halfway down the rail line from Richmond to Norfolk, she organized a league in the masonic hall in the town of Claremont, in Surry County, and the day after that she held two meetings at the county courthouse. She headed back to Richmond on the train that night for a meeting of 20 people in a private parlor on May 23. On May 24, Ramsay organized an educational committee for suffragists in Bowling Green, and the next day she met with 50 people in the Presbyterian church in Milford.

Saturday and Sunday of that week Ramsay was in Richmond, then on Monday, May 28, she met with fifteen people during a thunderstorm in the town of Ivy, west of Charlottesville. The following day she spent fifty cents to have a meeting room cleaned in Waynesboro for two meetings on May 30, one for 50 people and one for 8. The final entry in Ramsay’s May expense account shows that she spoke to about a hundred people at the Shenandoah County courthouse in Woodstock on 31 May 1917.

Ramsay spoke to more than 1,200 people in May, travelling over a thousand miles and spending $81.20 on food, lodging, transportation, and incidental expenses. The expense accounts do not specifically indicate how much of her travel was by bus, train, or automobile—at one point during her work she owned a car and drove herself between speaking engagements. During May, Ramsay tipped Pullman car porters eight times, which indicates that she rode in sleeping cars for part or all of eight nights. The Equal Suffrage League reported that she established a total of seventeen leagues, reorganized seven others, and opened six suffrage centers during her stint in Virginia. 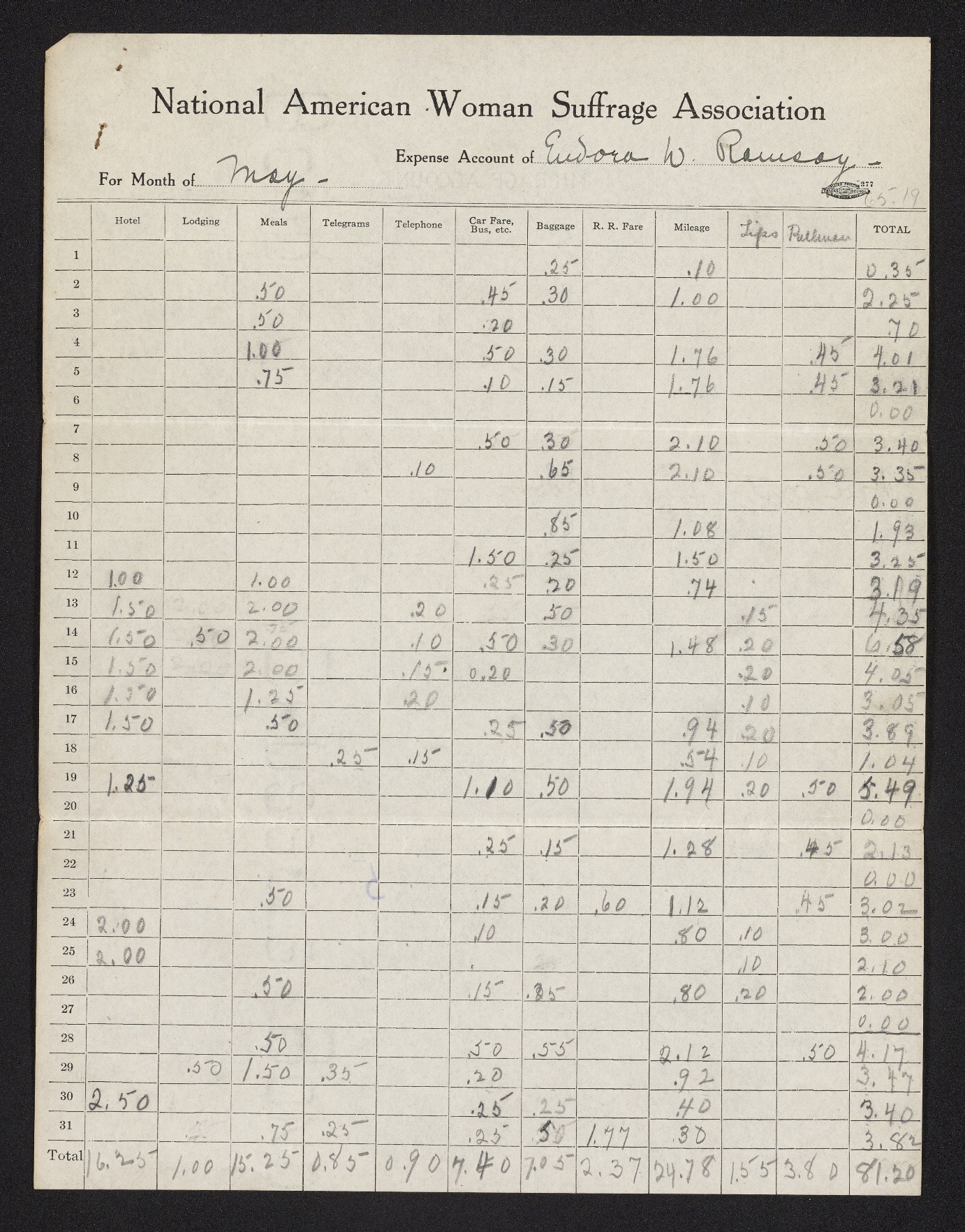 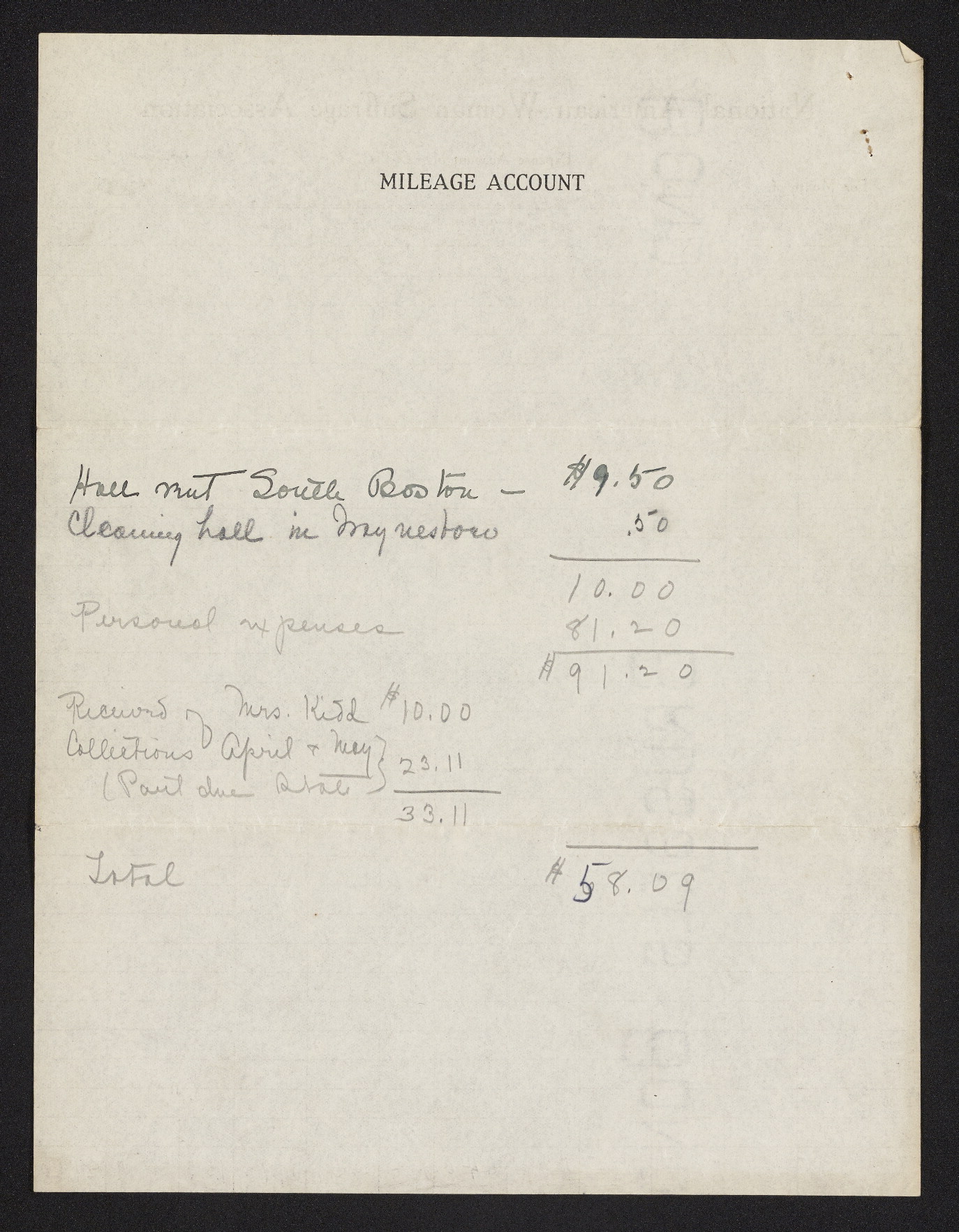 Ramsay’s work concluded the Equal Suffrage League’s campaign to organize local leagues of Virginia’s suffragists. The United States had just entered World War I, and while the Equal Suffrage League did not stop working on behalf of woman suffrage, the League encouraged its members to devote most of their efforts to war work. By 1920, the League had a membership of more than 20,000 and leagues in more than 140 towns, cities, and counties.

The Equal Suffrage League of Virginia was the largest and most influential organization of Virginia women to that time. Although Virginia’s General Assembly did not ratify the Nineteenth Amendment, the Equal Suffrage League was successful in convincing Virginians that women were ready for the vote. Learn more in the Library’s recent publication, The Campaign for Woman Suffrage in Virginia (The History Press, 2020), available for purchase at The Virginia Shop. Although our exhibit is currently closed to the public you can learn more about the League by reading our other blog posts.

– Brent Tarter, co-curator of We Demand: Women’s Suffrage in Virginia 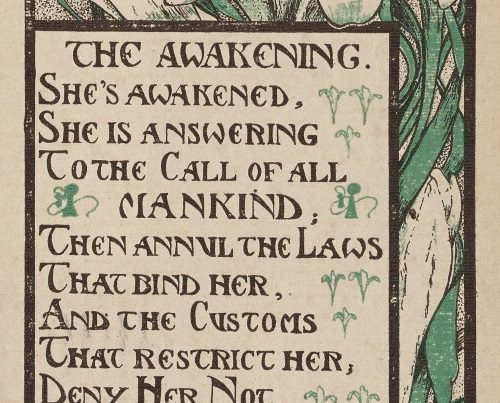 Letterhead in the Archives: Suffrage Edition 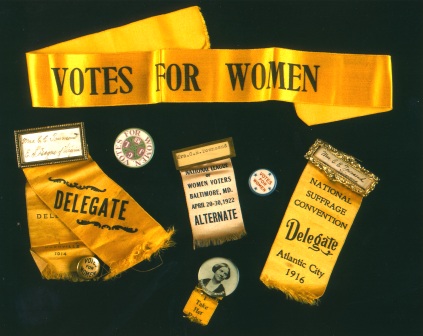