For those who enjoy the art and intricacy of transcribing historical documents, the Library of Virginia is pleased to announce that a selection of Albemarle County Judgments, 1780-1852, are available for transcription on Making History: Transcribe. The judgments specifically involve African Americans and were identified and scanned to be added to Virginia Untold: The African American Narrative. Like chancery cases, judgments are useful primary sources for understanding social, legal, and economic history of a locality, and often for genealogical purposes as well. This is a small selection of judgments involving African Americans, identified through an index of early Albemarle judgments by Library of Virginia Senior Local Records Consulting Archivist Eddie Woodward.

Judgments are civil suits that typically involve debt or monetary damages, and were heard by a jury on the law side of the court. Documents such as assumpsits or declarations explain the reason for the plaintiff’s charge, and depositions often give the reader a glimpse into events from the perspective of witnesses in their own words. Additionally, judgments can include a variety of documents that were used as exhibits by the plaintiff or defendant, including wills, contracts, deeds, coroner’s inquests, correspondence, accounts, and receipts. 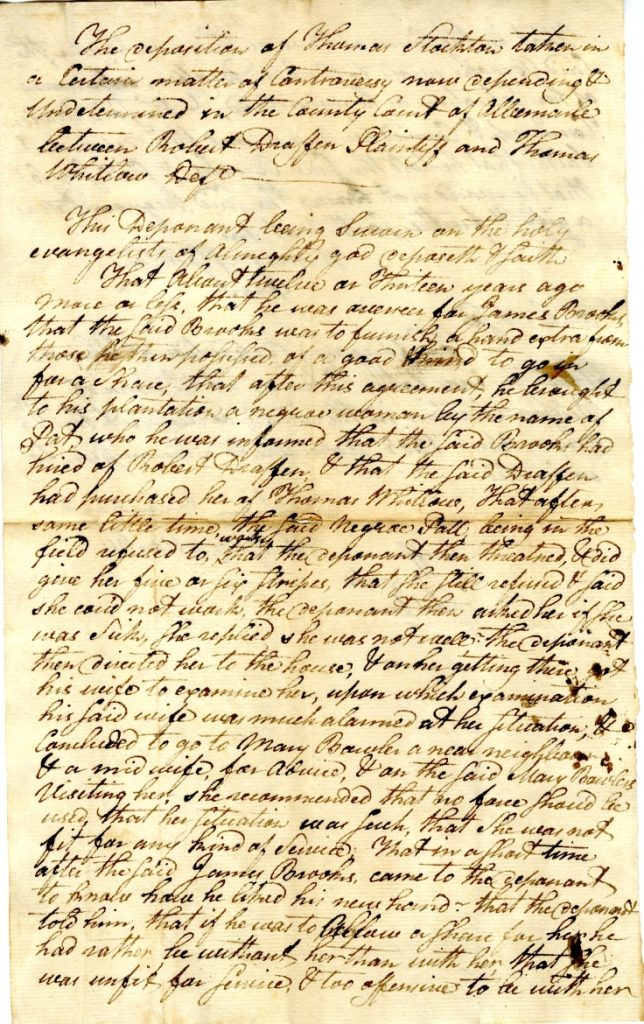 This selection of judgments covers a wide range of topics. Some cases pertain to debts relating to enslaved people stolen by others and taken across state lines. Others reference damages due from parties responsible for the escape or jailing of an enslaved person. Still others relate to payments for enslaved people hired out to others, or for damages (refunds) for purchases of enslaved persons who were then found to be ill or otherwise unable to work. These latter cases are of particular interest to those researching the health of enslaved women, as Robert Draffen vs. Thomas Whitlaw, March 1806 reveals. An overseer’s deposition stated that when a newly acquired enslaved woman named Patt refused to continue working in the fields on her first day, he “did give her five or six stripes, that she still refused & said she could not work.” He then sent her into the house and had his wife examine her, “upon which examination (his wife) was much alarmed at her situation & concluded to go to … a near neighbor & a midwife … (who) recommended that no force should be used … [and] that she was not fit for any kind of service.”1

In Charles Rodes vs. David Wood, Sep. 1804, Rodes sued Wood unsuccessfully for damages related to Rodes’s arrest and detainment after threatening to defend the abuse and arrest of enslaved people. The detailed depositions recount the abusive treatment of two enslaved people in May 1802 by David Wood, an individual in a slave patrol. Allegedly, white members of the community were on edge, fearing a potential slave revolt or rebellion akin to the thwarted uprising planned by Gabriel Prosser two years earlier. Charles Rodes, who was part of a different patrol that day, heard that Wood had ordered an enslaved woman to be stripped and beaten when Wood’s patrol encountered her and she could not produce her travel pass. A deponent later said that she and others had been returning from a Baptist meeting which her enslaver had given her permission to attend. When another enslaved man had attempted to stop Wood, Wood ordered him to be arrested, but then instead ordered him immediately stripped and lashed up to 25 times. Deponents stated that when Rodes heard of this, believing that the man also had been arrested, he declared that “his intention in joining the Patrole was, at all events, & at the risqué (sic) of his life, to rescue the said negroe if he had not been before released … that he had cut the stick, which he there held in his hand for that special purpose.” Wood then had Rodes arrested and jailed for his threatening behavior.2 Rodes filed his suit for damages in January 1803, and nineteen months later the jury found for the defendant.

John Robinson vs. Henry Mullins, April 1780, illustrates the breadth of topics that can be found in judgments. This was primarily a dispute over ownership of several bequeathed enslaved people from property owners in Essex, Hanover, and Albemarle Counties over the course of several generations. It includes two Hanover County coroner’s inquisitions of a mother and young daughter, Elizabeth and Mary Banks, who died along with an unnamed enslaved boy while attempting to cross the Pamunkey River in August 1768. One of the questions the jury had to consider was the legal ownership (and thus, the fate) of the enslaved people who had been considered the property of Elizabeth. Attempting to determine who died first—the mother or the daughter—and thus, which living relative became the legal heir of Elizabeth, became a legal chicken-or-egg scenario.3 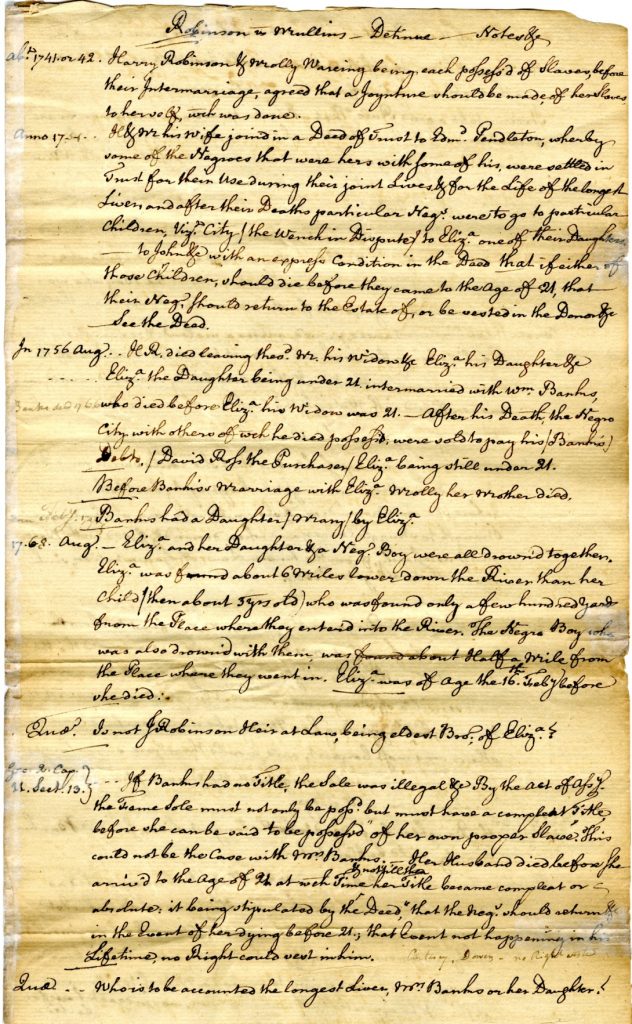 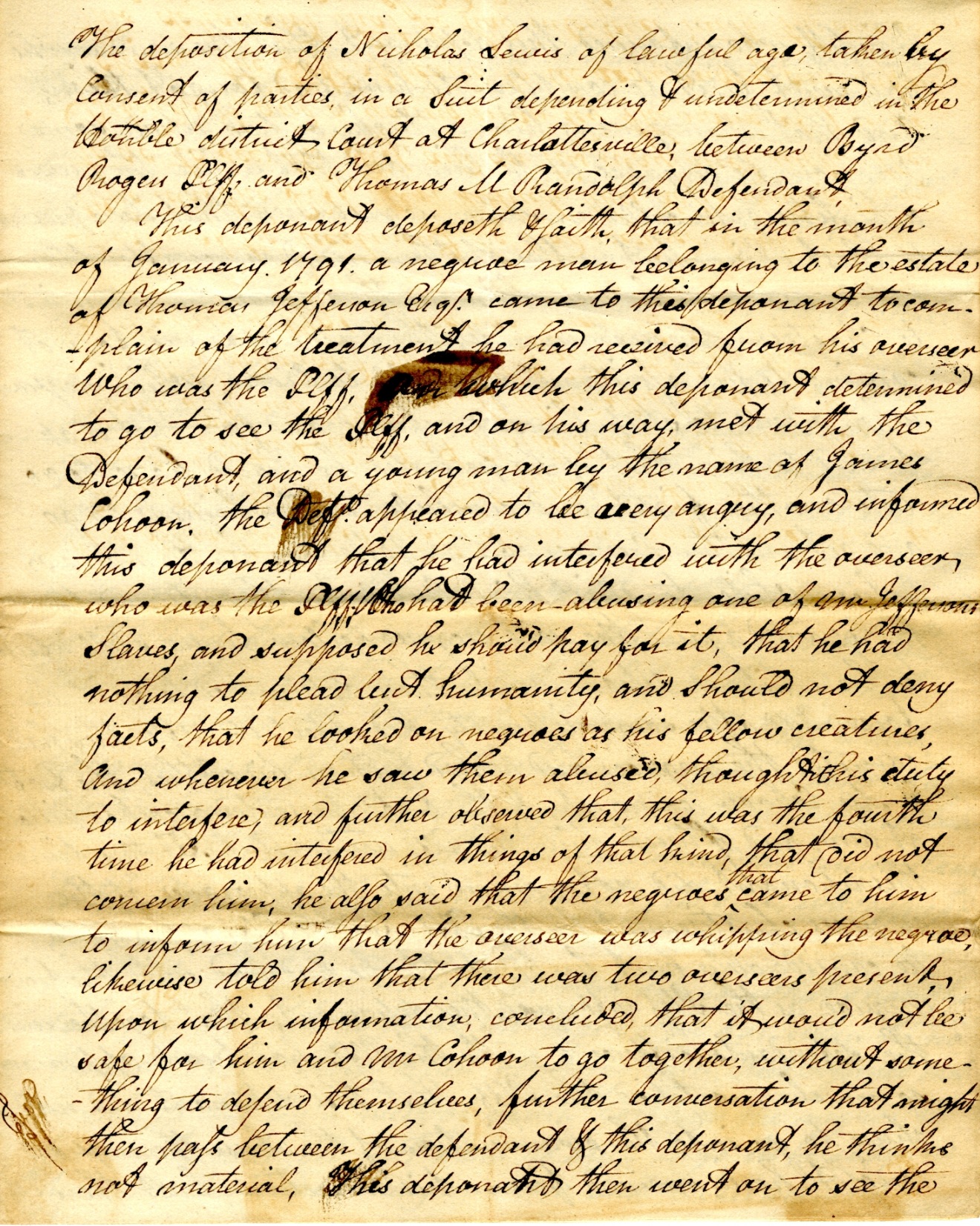 Given that Thomas Jefferson’s Monticello is located in Albemarle County, it was not surprising to find a judgment involving two people enslaved by Jefferson in Bird Rogers vs. Thomas Mann Randolph (Jr.), etc., April 1792. Randolph, Thomas Jefferson’s son-in-law, managed the affairs of Monticello when Jefferson was away, which included monitoring the treatment of Jefferson’s enslaved people. Depositions in this judgment corroborate that role. Bird Rogers, the plaintiff, was an overseer who had ordered an enslaved man named Lewis to assist him in beating another enslaved man. Lewis refused. Rogers then became enraged and stripped and beat Lewis, lashing him 20 to 25 times on his bare back. According to Nicholas Lewis, the deponent who was with Randolph at the time, when Randolph heard of this, he sought out Rogers and beat him with a cocked pistol. The deponent afterward recounted that “he (Randolph) had nothing to plead but humanity, and … that he looked on negroes as his fellow creatures, and whenever he saw them abused, thought it his duty to interfere … and this was the fourth time he had interfered in things of that kind that did not concern him.”4

Three separate judgments likely involving the same free person of color provide some remarkable insights as well. In Stepney a free man of color vs. Thomas Tyler, August 1796, Stepney sued for damages after Tyler assaulted him, and the jury found in his favor.5 In Joshua Burress vs. Stepney Carter, May 1806, Burress sued for a debt related to Carter’s purchase of an enslaved person. Documents in the judgment further reveal that Carter had purchased two enslaved people from Burress at different times, the most recent of whom was Carter’s own daughter. The jury determined through the value of Carter’s cash payments and payments in kind, such as butter and tobacco, he had actually overpaid Burress, so they ruled in Carter’s favor.6 However, in Stepney (Carter) a free man of color vs. John Kerby, March 1809, Carter sued John Kerby for damages from assault but the case was dismissed, despite a very detailed and insightful affidavit from Thomas Mann Randolph, Jr. The last lines of this affidavit reveal the complexity of social concerns of the day, and Randolph’s own prejudices about the status of free persons of color:

“Although no man can be more unwilling than myself to increase the pretensions of that class of people, which I am well convinced are allready (sic) greatly detrimental to society on the footing it is in Virginia, I did not deny my advice to Stepney as I could not withhold from him my sympathy. I did advise him to take legal steps for redress & safety, assuring him that he was under the protection of the law in his person & property & pointing out to him how to avail himself of that advantage, for I was at the moment strongly influenced by the reflection that if the Law was to be rendered by public feeling impotent to protect free-black-men from the outrages of the whites it might in time, by the increase of inequality and distinctions which wealth must occasion, imperceptibly become insufficient for the security of the poor against the rich.”(7)

For those interested in a closer look at these documents or assisting in transcribing them, they are available on the Library of Virginia’s Making History: Transcribe site awaiting full transcription, and will then be indexed and made fully searchable in Virginia Untold: The African American Narrative.