This is an entry in our “Random Reference” series, which features interesting discoveries made and reference questions answered by our Archives & Library Reference Services staff.

For the last couple of years I have been assisting with Transcribe, a crowdsourced project that makes possible online word searches of hundreds of documents in the Library’s holdings. While transcribing documents in our Colonial Papers recently, I came across a 1728 letter with a signature that rang a bell: Thomas Avent. Thanks to a family tree passed down by my great-grandmother, I knew Avent was one of my ancestors. The document was interesting in itself, not just because of the family connection. Avent, a captain in the Surry County militia and a justice of the county court, was conveying crucial intelligence about intertribal violence among Native Americans that threatened to spill over into attacks against colonists.

Executive Journals of the Governor’s Council for 15 August and 22 August 1728 provide key background to the letter. Avent had written a previous letter and then testified to the council in person, bringing news that the son of the “king” of the Totero (also called Tutelo) tribe, which lived with the related Saponi tribe at Fort Christanna in Brunswick County, (The act creating Brunswick County passed in 1720, but until 1732 Surry County administered the area around Fort Christanna.) had been murdered by members of the Nottoway (Cheroenhaka)  tribe.  The Nottoway in turn complained that the Saponi had murdered two of their people, and Avent testified “that the said Saponie Indians had declared to him that they would not be satisfied till they had killed four of the Nottoways in revenge for the death of the Tottero King’s son.” The Govenor’s Council decided to imprison “the King of the Nottoways and one of the great men of that nation” until the the Nottoways surrendered the accused murderer, to imprison two Saponi leaders known as Tom and Harry Irwin until their tribe surrendered the killers of the two Nottoways, and to imprison “Pyor another of the Saponie Indians [who] hath threatened the life of Coll. Henry Harrison [member of the House of Burgesses from Surry].” 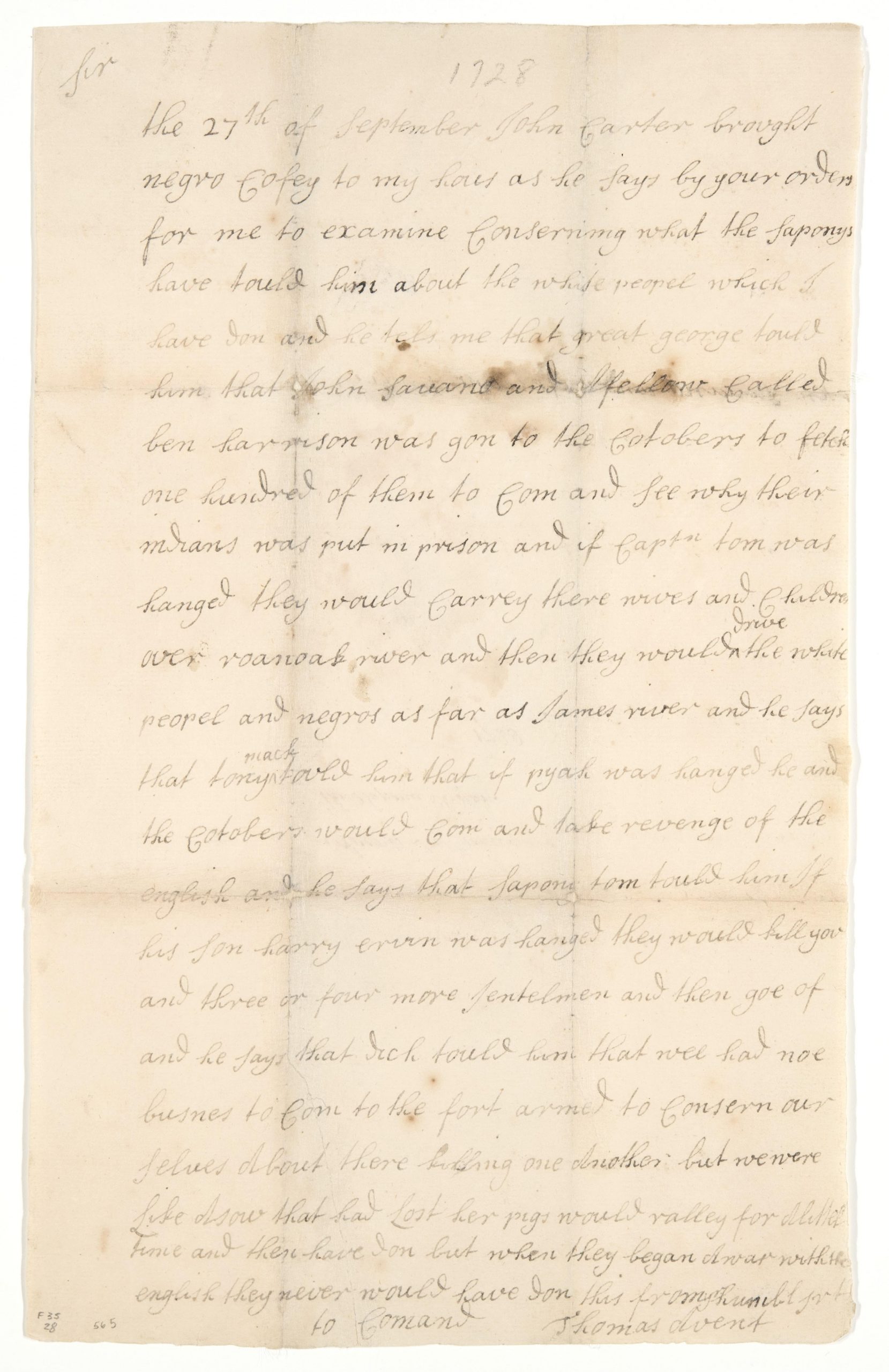 Sir William Gooch (Lieutenant Governor of Virginia from 1727 to 1749), and his council received Avent’s letter.

The Colonial Papers letter from Avent, written sometime after 27 September 1728, tells what happened next. An African American man named Cofey notified Avent that the Saponi told him that two members of their tribe had gone to their allies the Catawbas (spelled “Catobers” by Avent) in South Carolina, and would bring back a hundred warriors to take revenge if any Saponi prisoners were executed. They threatened to “drive the white people and negros as far as James River.” Apparently Avent’s letter was intended for Colonel Henry Harrison, as Avent wrote of threats to “kill you and three or four more Gentlemen,” echoing the council’s mention of threats against Harrison.

This letter is a reminder of the ethnic and cultural diversity of the early eighteenth-century Virginia frontier. Avent, an English immigrant, reported news from a man with a West African name (Cofey, now spelled Kofi) who had conversed with Native Americans, some of whom had English names while one (Pyor/Pyah) had a Native name. Fort Christanna, the fort mentioned in the letter, saw much interaction between Native Americans and Europeans. The fort had a trading post where Indigenous people would trade furs and deerskins for European goods and an English-run school that taught Christianity and the English language with the intention to convert and westernize Native Americans.

The Saponi had acquiesced to an order from Governor Spotswood to relocate around the fort in 1714 in exchange for a promise of protection. Although the Fort was abandoned quickly many Saponi stayed in the area. According to the journal of the governor’s council, Avent reported that the Totero king’s son was acquainted with the Nottoway man who struck him with a tomahawk–both had attended the Brafferton School at the College of William and Mary.

The fate of the imprisoned tribal leaders is unclear, but the Saponi and Catawba did not carry out their threatened vengeance. The Saponi, Catawba, and other groups were continually forced to relocate as first the Colonial powers, and then the United States government, broke their treaties with them in order to gain more land. Many of the Saponi and Totero/Tutelo moved to South Carolina in 1729, and moved again around the year 1740 and become part of the Cayuga tribe of the Iroquois confederacy in western New York.  Some of the Saponi moved to North Carolina, where there are three state-recognized Saponi/Sappony groups today.  Some of the Nottoway tribe also joined the Iroquois, but others remained in the Surry/Southampton area of Virginia, where two tribal organizations—the Nottoway of Virginia and the Cheroenhaka (Nottoway)—were belatedly recognized by the Commonwealth in 2010.

My thanks go to the Avent Family Association and Steve Avent, webmaster, for providing information on Thomas Avent’s life and times.