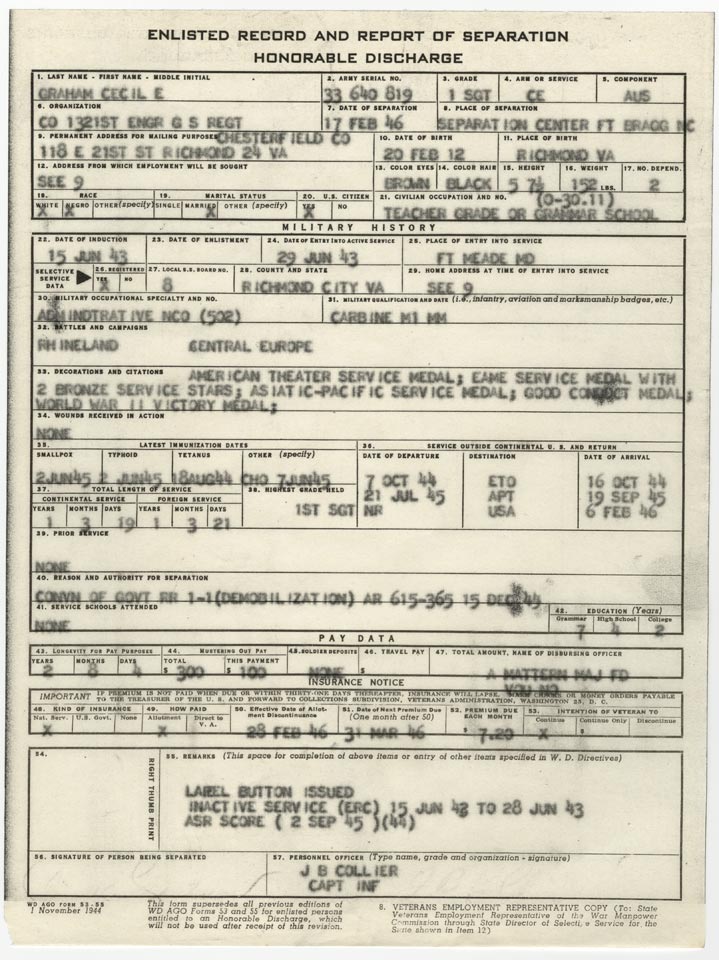 War, Remembrance, and the Power of Records

For this week’s Veterans’ Day-themed post, I am going to depart from our usual practice of focusing on images, documents, and stories that Library of Virginia archivists uncover as we process collections.  Instead, I would like to share the story of Cecelia Graham and how a chance conversation with my wife led to the emotional discovery of the World War II Separation Notice of Cecelia’s father.

The Virginia World War II Separation Notices was one of the first collections I processed at the Library of Virginia; it contains approximately 250,000 notices for World War II veterans discharged between 1942 and 1950 (with the bulk between 1944 and 1946) who sought employment in Virginia.  A disastrous 1973 fire at the National Personnel Records Center in St. Louis destroyed a large percentage of Army and Army Air Force records in federal custody for veterans discharged between 1912 and 1960.  The LVA’s collection of separation notices became invaluable to Virginia’s servicemen and their families after the fire.

These records have been part of the Library’s archival collection since 1950 but they were in no order and the Library did not have the resources to process them.  I recognized the importance of the collection and, being young and impatient, I was determined to do “something” about it.  That “something” turned into the largest filing project in the LVA’s history.  From September 1998 to June 2003, I alphabetized approximately 250,000 separation notices.

The Separation Notice of Cecil Graham issued after the close of WWII.

A few months after I started processing the collection, my wife Kim mentioned the WWII Separation Notices project while trying to explain my job to Ceceilia, her friend and co-worker.  Cecelia’s father, Cecil Graham, served in World War II; she asked Kim if I would search for her father’s record.  I agreed.  We had not developed any access procedures or request forms for the collection yet, so I just wrote Cecil’s name and birth date on a yellow piece of paper and taped it to the wall in my work area.  About a year later, I found Cecil Graham’s record.  He was in the United States Army from 1943 to 1946 and served in both the European and Pacific Theaters.  I made a copy of the record and went back to processing.  When Kim gave it to Cecelia, she began to cry.  Cecelia lost most of her family at a very young age; her father died when she was still a child.  She had no one to tell her stories about her family and knew nothing about her father’s military service.  She treasured this record.  Having a copy of her father’s record was like having a part of him.

Cecelia later called me at home to thank me for finding her father’s record.  She then told me something I’ll never forget.   She had two sets of military dog tags but never knew which belonged to her father and which belonged to her deceased brother, also named Cecil.  Having learned her father’s service number from his separation notice, she could now distinguish which was which.  Finding Cecil Graham’s separation notice is the proudest moment in my 16-year career as an archivist.  Cecelia’s story changed how I viewed my own work.  Processing the separation notices was no longer a filing project.  Each record had its own story and each could have its own Cecelia looking for answers.  For the remainder of the project, I kept the yellow piece of paper with Cecil Graham’s information taped to the wall to remind me of Cecelia and the emotional impact one record can have.

The Virginia World War II Separation Notices contain privacy-protected information such as such as social security numbers and medical information.  Access to the collection is limited to veterans and their next-of-kin.  For more information on the Library’s wealth of resources on Virginia’s wartime experience, please see the November 2010 issue of the Library of Virginia’s e-newsletter.