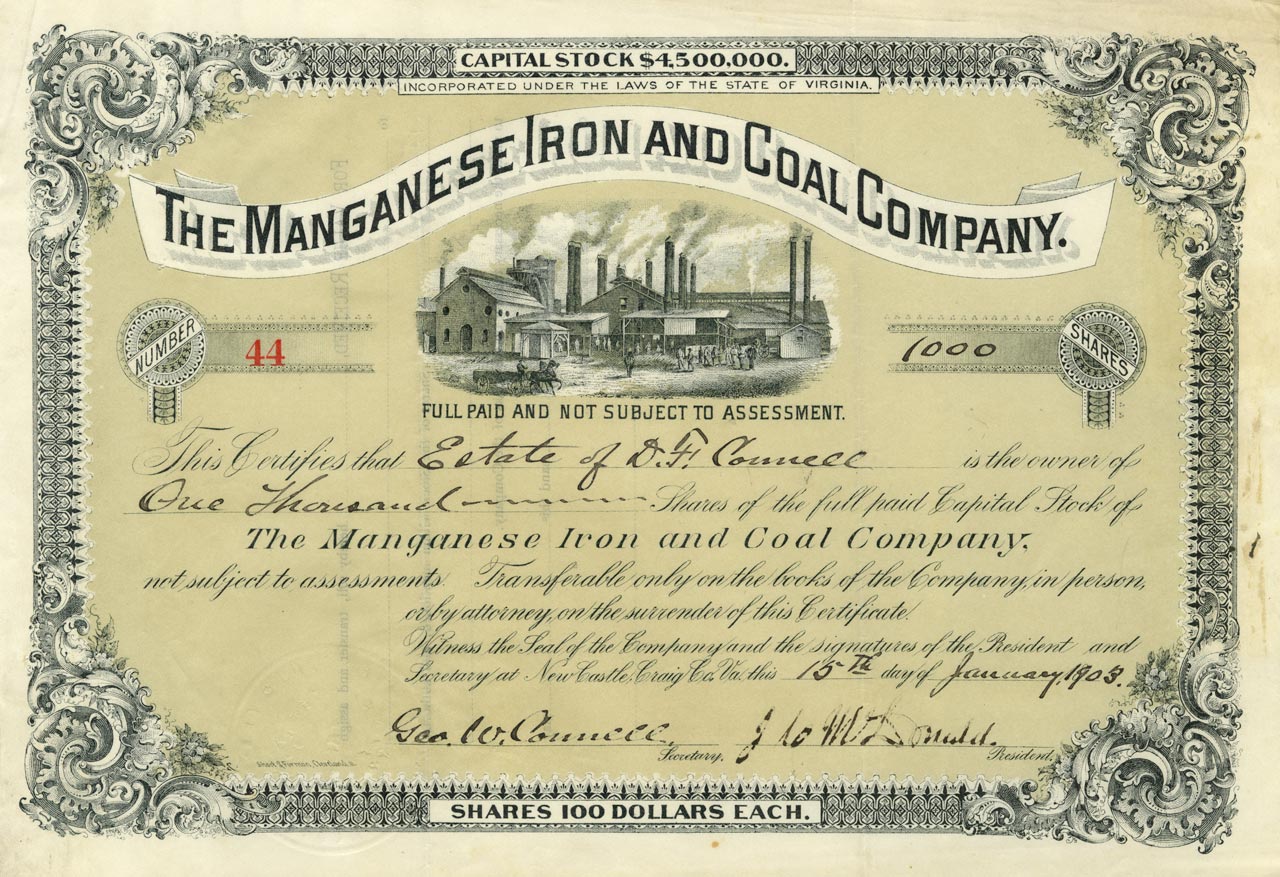 Editor’s Note: The Library of Virginia is pleased to announce that scanning has now been performed on the Craig County and Pulaski County chancery causes. The digital collections are now available online through the Chancery Records Index.

The Library of Virginia is pleased to announce that processing and indexing of the Craig County and Pulaski County chancery causes is now complete.  Each of Virginia’s circuit courts created chancery records that contain considerable historical and genealogical information. Because the records rely so heavily on testimony from witnesses, they offer a unique glimpse into the lives of Virginians from the early 18th century through the First World War. The indexes for both counties have been added to the Library’s online Chancery Records Index and are now available for research.

Craig County chancery covers the years 1853-1942, with the bulk of the cases falling between 1853 and 1912.  One suit of particular interest to researchers of African American education is the suit of Paris W. Compton vs. Admr. of Cornelius Compton, 1913-009, in which Paris was suing his father’s administrator to receive his inheritance.  In his bill, he states that he and his mother had moved to “Ardmore near the city of Philadelphia in the State of Pennsylvania, at which place your complainant has been attending school, for the reason that persons of his race are afforded approved, better, and more improved educational facilities and advantages than are afforded in his home state of Virginia.” Researchers may also want to take a tour through the whiskey distillery account books of Andrew McCartney and read an 1882 letter from Senator W. A. Glasgow.  The senator replied to McCartney’s complaint against a law that prohibited the sale of small amounts of liquor – less than five gallons – near an iron manufacturing company, a measure devised to stop workers from showing up drunk (see 1908-011, Admr. of Andrew McCartney vs. F. B. McCartney etc). 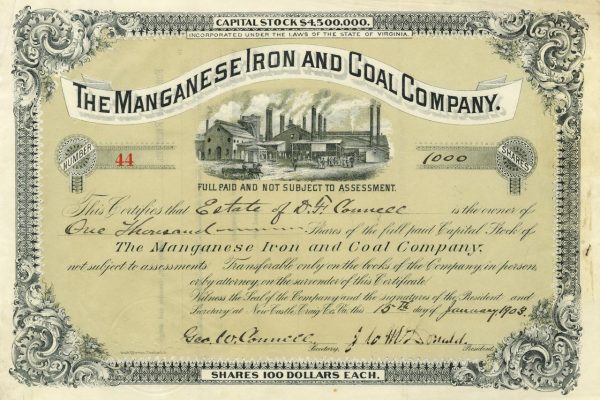 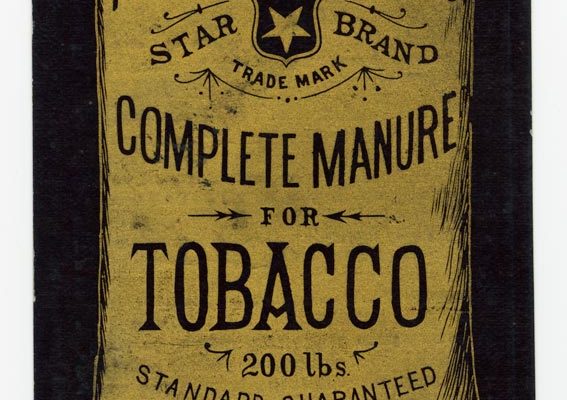 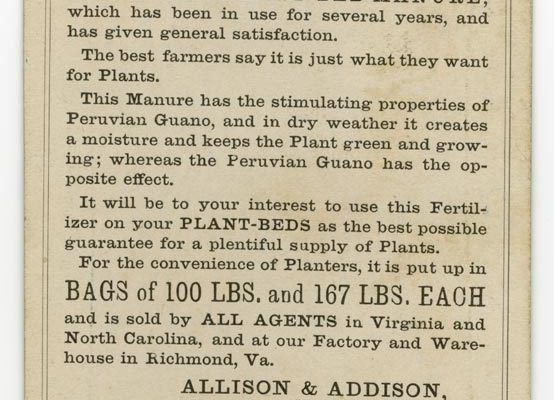 Back of advertising card

The majority of the suits concern issues of debt or land partition between heirs.  Through these chancery causes it is also possible to see evidence of the development of the iron ore mining and timber industries as well as hints of a slate and wool industry.  Land development companies such as the Craig City Improvement Company and the New Castle Land and Improvement Company were formed to encourage industrial growth although, as evidenced by the many chancery suits in which they became involved, many fell victim to the economic bust of the mid-1890s. 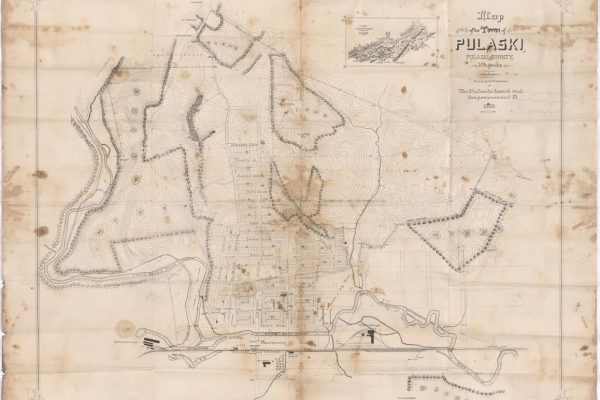 Map of the town of Pulaski 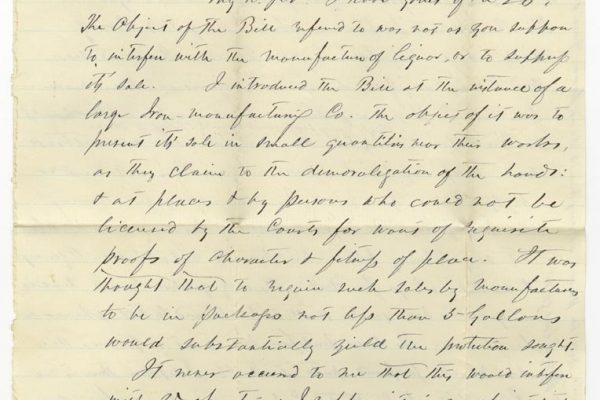 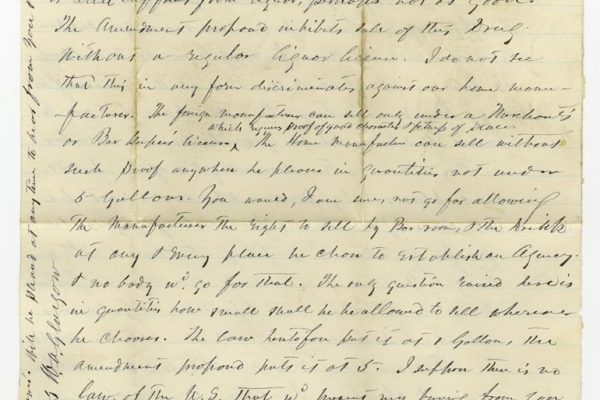 The Pulaski County chancery causes document the years 1841-1912. While the majority of cases involve disputes over land ownership and the settlements of debts, many cases detail the area’s industries and the arrival of the Norfolk & Western Railroad. The 1880s saw the development of several iron and mining industries in Pulaski County, and many of those companies – Pulaski Iron Company, Bertha Zinc Works, Radford Iron Company, Dora Furnace – are represented in chancery causes. Researchers interested in railroad history will find several cases involving the Virginia & Tennessee and Norfolk & Western Railroad Companies. For example, in 1859 the Virginia & Tennessee Railroad was sued by a Pulaski contractor for payment for work performed on sections of the railroad.  Another example came in 1884, when Andrew Boyd and James C. Alexander successfully sued the Norfolk & Western Co. for attempting to lay tracks within fifty feet of their homes (See 1859-006, Pryde & Jones vs. Virginia & Tennessee Railroad Co. and 1884-013, Andrew Boyd, etc. vs. Norfolk & Western Railroad Co.). Land development companies, such as the Pulaski Development Co. and the Pulaski Land and Improvement Co., were formed to take advantage of the incoming railroad and the industrial growth it was expected to bring, but several chancery suits show that these companies found themselves in legal trouble when development plans fell through. Researchers may also be interested in the J. Farmer Physician Ledger, 1867-1898, kept by Pulaski physician Jerry Farmer. The ledger details services performed by Farmer and the purchases of medicines by local residents (See 1884-027, Jerry Farmer vs. Heirs of Elbert S. Trinkle).

The Craig and Pulaski County chancery causes are open and available for research at the LVA. Recent reductions to the Library of Virginia’s budget have slowed the pace of the agency’s digital chancery projects. Once funds become available, the chancery causes will be digitally reformatted and made available through the LVA’s Circuit Court Records Preservation Program. Until then the originals are available to researchers.