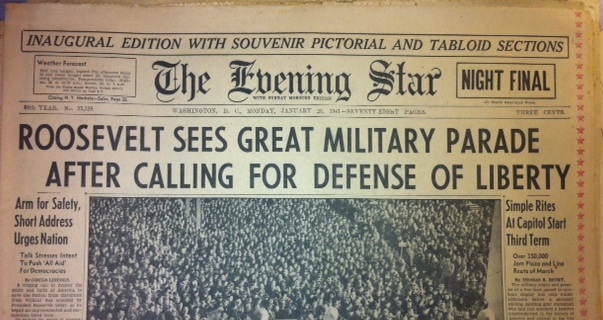 How much was a bottle of bourbon in 1941? How about a “beautifully rebuilt” Electrolux vacuum? The prices of these and other items can be found on the back page of an issue of the Washington Daily News that was recently given to the Library of Virginia. While the nation was preoccupied with impending war, evidenced by the issue’s bold headline, “IT’S WAR, SAYS JAPAN AFTER ATTACK ON US,” the everyday life of people is revealed in the ads, classifieds, movie announcements and local news found in the Daily News.

The gift given to LVA also includes several issues of the Evening Star, a daily published in Washington DC from 1854-1972. Among them is a January 20, 1941 Inaugural Issue of Franklin D. Roosevelt with three sections devoted to full page photo layouts of the people, places and events on the political scene as Roosevelt entered his second term. There are also issues of the Star from December 1941 announcing the US’s declaration of war with Japan and Germany.

A supplement of the Richmond Times Dispatch celebrating the 350th anniversary of Jamestown, a Bicentennial Edition of the Progress-Index (Hopewell) and a Richmond News Leader announcing the death of King George are part of the gift as well.

Come take a look at history as it was written in the newspapers. To search titles held by the Library of Virginia, visit the Virginia Newspaper Project’s Newspapers in Virginia Bibliography on the Library’s web site.