Newspaper Accounts on the Death of Lincoln

With the renewed interest in President Abraham Lincoln due to Steven Spielberg’s latest movie, I thought it would be interesting to take a look at newspaper coverage of the assassination and the ensuing manhunt. In the spirit of full disclosure, much of Lincoln was filmed in Richmond, Virginia and I was an extra in the film, playing a Radical Republican. See photo below.

To my surprise, our collection has very few Virginia newspapers from the period just after the war. Many newspapers we have from that time seemed to have stopped publishing in March 1865 as a result of worsening conditions in wartime Virginia. It is helpful to know a few dates concerning the end of the war: Lee surrendered to Grant at Appomattox on April 9, 1865; Lincoln was assassinated on Friday evening of April 14, 1865 and died the following day at 7:22 AM.

I was able to find several papers from the days following the assassination that have interesting information I have never come across before. I thought it would be beneficial to simply transcribe some of these accounts to satisfy public curiosity.

Over the next several days, we will feature extracts of articles from the newspapers published shortly after Lincoln’s assassination. 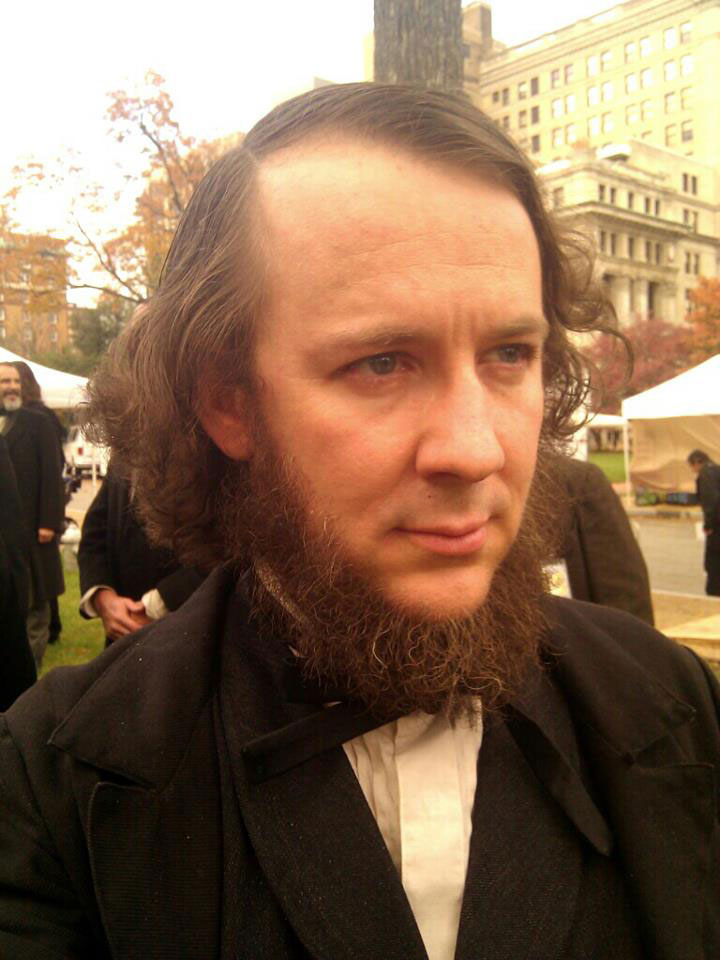 I played Republican #17 in Spielberg's ``Lincoln.``

On page 1, appeared the following:

One Hundred Thousand Dollars Reward.
The murderer of our late beloved President, Abraham Lincoln, is still at large !!!
FIFTY THOUSAND DOLLARS REWARD will be paid by the Department for his apprehension, in addition to any reward offered by Municipal authorities or State Executives.
TWENTY-FIVE THOUSAND DOLLARS REWARD will be paid for the apprehension of G. A. ATZEROT, sometimes called “Port Tobacco,” one of Booth’s accomplices!
TWENTY-FIVE THOUSAND DOLLARS REWARD will pe paid for the apprehension of DAVID C. HEROLD, another of Booth’s accomplices!
All person harboring or secreting the said persons, or either of them, or aiding or assisting their concealment or escape, will be treated as ACCOMPLICES in the murder of the President and the attempted assassination of the Secretary of State, and shall be subject to trial before a Military Commission and the punishment of DEATH!
Let the stain of innocent blood be removed from the land by the arrest and punishment of the murderers!
All good citizens are exhorted to aid public justice on this occasion. Every man should consider his own conscience charged with this solemn duty, and rest neither night nor day until it be accomplished.

NEWS BY TO-DAY’S MAIL.
Gen. Auger, by direction of the Secretary of War, has issued an order prohibiting all those engaged in the investigations of the matter connected with the murder of Mr. Lincoln and the attempted assassination of Secretary Seward, from divulging any information brought by the investigations except to the War Department and the Headquarters of the Department. All parties violating this order will be looked upon as obstructing the prompt arrests of the conspirators, and will be punished accordingly.

On Tuesday the prisoners at Point Lookout, through their sergeants of divisions, passed resolutions representing the voice of 22,000 Confederate prisoners, expressing their abhorrence of the assassination of the late President and their warm sympathy with the distressed family. The resolutions were to be sent to the War Department through General Barnes, commandant at Point Lookout.
J.D. Reamer, a prominent merchant of Hagerstown, Md., was arrested in that place on Tuesday and brought to Washington yesterday, upon the charge of having some knowledge of the conspiracy against Presdent Lincoln and his Cabinet.

Brigadier General Patrick has issued an order prohibiting all officers and paroled men, and all others not on duty in Richmond, from wearing side arms and revolvers.

We hear that ll deserters and paroled prisoners will for the present be landed at Fortress Monroe instead of being forwarded to Washington.
Miss Laura Keene, and Messrs. Hawk and Dyott of her company, who were arrested at Harrisburg on Monday, were discharged by an order from Washington, on Tuesday.

All the Democratic papers which have come to hand since the recent national calamity are unanimous in declaring that President Johnson should be treated generously and fairly by the party heretofore in opposition.

Several persons were arrested in New York, on Tuesday, for uttering disloyal language in connection with the death of President Lincoln. Among those arrested were “Count” Cheesbrough, a wealthy resident of Stuyvesant Square.

Gen. Lew. Wallace resumes command of the Middle Department. Brevet Brig. Gen. Morris, who has administered the affairs of the department during the absence of Gen. Wallace, again takes command of Fort McHenry.
= = = = = = = = = =
The Washington Chronicle believes that the letter professing to be from J. Wilkes Booth, published in many newspapers, and to which reference was made yesterday, was not written by the assassin but was manufactured by some one else.
= = = = = = = = = =
There was a decided improvement in the health of Secretary Steward last night. There is no alteration in the case of his son.
= = = = = = = = = =
THE ASSASSINS
Booth is again reported to have been recognised at points so entirely distant from each other as to lead to grave doubts whether he has been encountered at all since the night of the assassination. Telegrams from Reading, Pennsylvania, assert positively that he left that place for Pottsville, by railway, on Wednesday night. An extra train was immediately sent in pursuit, but the suspected man is said to have left the cars at Port Clinton. Another account has it that Booth attempted to cross the lower Potomac, but failed to do so. A negro by whom he is said to have been accompanied was arrested and is now in prison. Later telegrams from Reading report that the man suspected to be Booth was arrested yesterday at Tamaqua, but the citizen of Reading who professed to recognize him made an affidavit yesterday afternoon that the only time he saw Booth was seven years ago, and that he does not now believe that the person who he caused to be pursued was Booth.
= = = = = = = = = =
PRESIDENT LINCOLN’S REMAINS. — With regard to the removal of the remains from Washington to Springfield, Illinois, official dispatches received show that the funeral train will reach Baltimore this morning at ten o’clock, and remain until 3 o’clock P.M. During the intervening five hours the remains will, it is understood, be deposited in the rotunda of the Exchange building, so as to afford the public an opportunity to view them.

The costerge will then leave for Harrisburg, by the Northern Central road, en route to Philadelphia, to remain at Harrisburg, however, till 12 M on Saturday. Reaching Philadelphia, the remains will be detained there until Monday and thence conveyed to New York, whence they will be removed on Tuesday afternoon, to go by way of Albany, Buffalo, Cleveland, Chicago, &c. to Springfield. Not until the 3d of May are they expected finally to reach the latter place for interment.

The employees of the U.S. Military Railroads, at this place, numbering over two thousand, attended the funeral of President Lincoln in a body.
= = = = = = = = = =
Arrest of one of Booth’s Accomplices.
The following telegram from Brigadier General Tyler, addressed to Mr. Wm. P. Smith, the Master of Transportation of the Baltimore and Ohio Railroad, shows that Atzerott, one of the parties for whose apprehension $25,000 reward is offered by the Secretary of War, has been arrested and brought in to the Relay House, at the junction of the Baltimore and Ohio and Washinton branch railroads. The dispatch is as follows:

RELAY HOUSE, April 20, 1865 — 7 o’clock, 40 minutes P.M. — To Mr. W.P. Smith: — Sergeant Gammill, First Delaware Cavalry, Capt. Townsend’s company of my command, has just brought in George A. Atzerott, one of the assassins. He has been identified by the detectives who have been pursuing him.

A National Monument fund is on foot and a plot of ground, six acres in extent, in the heart of the city, has been selected as the burial place of our late lamented President.
SHARON TYNDALE, Secretary of State.
= = = = = = = = = =
A report is mentioned in a New York paper, as coming from Winchester, Va., to the effect that Mosby surrendered his entire command, comprising about 700 men last Tuesday, to Gen. Hancock, at Berryville, Va. The terms of the surrender, it is stated, were similar to those accorded to General Lee by Gen. Grant. There is also a report that Gen. Rosser has asked to be allowed to surrender, on the same terms as those granted Moseby.

The arrest in Boston of Joseph H. Borland, a boot and shoe merchant in Pittsburg, for stating that he was acquainted with John Wilkes Booth’s intention to kill the President, was mentioned a few days ago. The Boston Herald, of Monday, says:
He repeated his declarations that Booth had told him within a short time that he meant to shoot the Presdient, and also that he was, since that time, in company with him at Edward’s pistol gallery, where he (Booth) was practicing pistol firing in difficult positions, etc. After his incarceration in the Tombs, Borland changed his story, denying that he had ever seen John Wilkes Booth, or that he ever knew there was such a person. These statement are manifestly untruths.
= = = = = = = = = =
The Negroes at Work
The following is an extract from an order issued by General Ludlow, commanding the Peninsula district, comprising the counties immediately north of the James River:

“It has come to the knowledge of the authorities that the negroes on the different farms are refusing to work, or are leaving their accustomed homes, and coming into Richmond and other places occupied by troops. They are hereby directed to remain at their old homes, to go to work as usual on the farms, and raise the produce necessary for their maintenance and are assured that their freedom shall be protected.