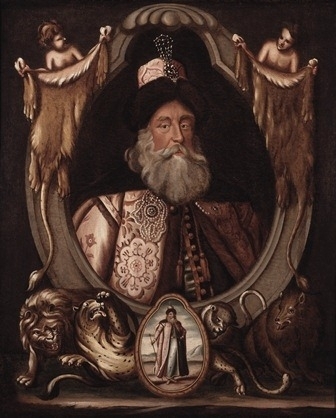 From Russia with Love: How a portrait of a Russian Ambassador came to be hanging in the Virginia State Capitol

In 1923 the Virginia General Assembly accepted a gift which would lead to an international investigation and administrative embarrassment 15 years later.  The gift was a 300-year-old portrait of none other than “first Captain and practical founder of the State of Virginia” Captain John Smith.  Or was it? The painting depicts a bearded man wearing a fur-trimmed hat and elaborately embroidered coat, flanked above by putti (chubby male children) holding pelts and below by snarling lions.  The portrait was presented to the General Assembly by 15 prominent Virginians including John Stewart Bryan, Fairfax Harrison, and Eppa Hunton Jr.

The portrait was purchased for $1,000 in 1923 through the London-based firm of B.F. Stevens and Brown, “experts in Americana.” The painting subsequently hung in the Governor’s Office, where it remained until the U.S. Ambassador to Argentina, Alexander W. Weddell, studied the painting while editing the book A Memorial Volume of Virginia Historical Portraiture, 1585-1830. 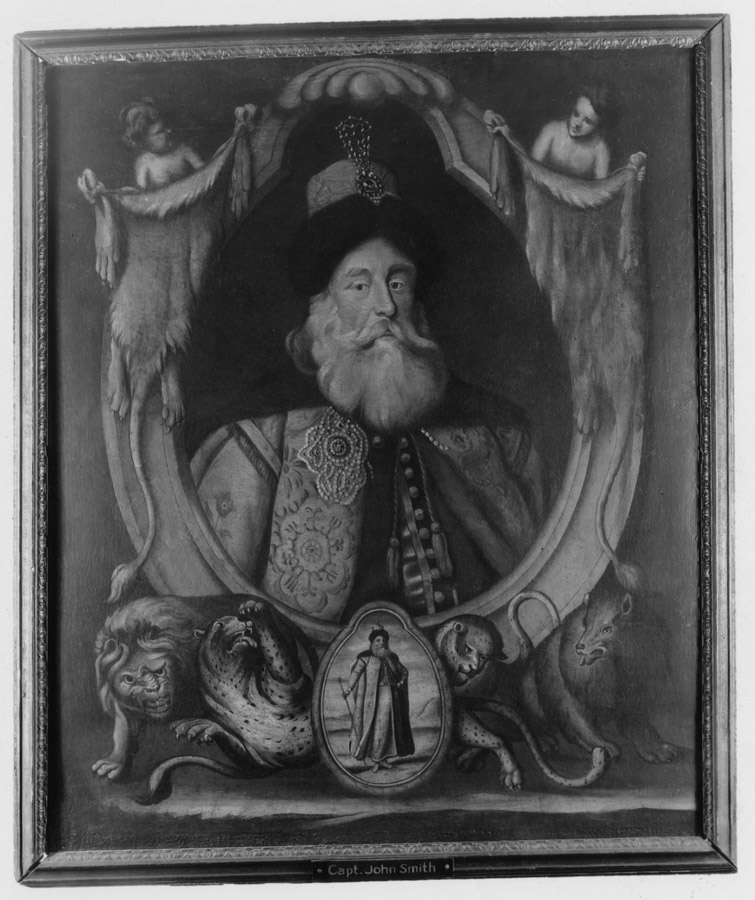 Faux portrait of Captain John Smith as it appeared while hanging in the Virginia Capitol. Note the plaque at the bottom of the frame.

Weddell believed the portrait to be that of “the half-mad son of Lady Mary Wortley Montague, who was known to have walked about London in Oriental garb.” Weddell discussed the portrait with the director of the National Portrait Gallery in London, H. M. Hake, who found the original engraving which the Commonwealth’s portrait was modeled after–and it is of little surprise that it was not of John Smith.

Portrait of Peter John Potemkin as it appears today.

Image courtesy of the Muscarelle Museum at the College of William and Mary.

The portrait was actually that of Peter John Potemkin (Pyotr Ivanovich Potyomkin), Ambassador to England for Peter the Great.  Hake was able to definitively identify the painting bought by Virginia as an obviously inferior rendition of the engraving housed in the National Portrait Gallery, which was indisputably described and dated by the engraver.  Hake, too, was able to shed some light upon how such an egregious mistake may have been made—the painter of the original portrait was Sir Godfrey Kneller, and an engraver in his studio was named John Smith.

The Virginia State Librarian, Henry R. McIlwaine, point person for the state in the transaction, communicated with Stevens and Brown and requested a thorough examination and report of the piece before even considering its purchase.

He felt the price was “excessive” and that if the General Assembly were to grant the funds for the painting’s purchase “it would be taken from some other appropriation of the library.” He was also sure that the “picture will probably come to America, and we can at least get a copy of it.”  McIlwaine’s language is less than enthusiastic, and subsequently the seller agreed to a lower price.

It is hard to say if this is simply a case of getting one over on the Yanks, but Stevens and Brown did use rather dubious methods in authenticating the piece.  For one, they relied on a handwritten paper label, less than 100 years old, reading “Portraituer of Captain John Smith, Admiral of New England, 1626,” as grounds for identification, along with the word of the elderly former owner who had been told by his grandfather that the piece was of Captain John Smith.  Brown’s report, though, did state “No one, of course, can guarantee the picture as undoubtedly a portrait of Captain John Smith.” They also explained away the odd dress for an English ship captain by reminding McIlwaine of Smith’s ability to escape from the “Turks” by dressing as one, and suggested that the artist was paying homage to Smith’s career prior to the American colonies.  Also, the fact that the portrait was of an older Smith excused the vast difference between the facial features of the man in the painting they were brokering and the quintessential Simon Van de Passe engraving of Smith from 1616.  The most suspect evidence against Stevens and Brown, perhaps, is their claim that the National Portrait Gallery aided in concluding the portrait was of Smith—the same gallery that 15 years later confirmed the subject to be Potemkin.

The piece, needless to say, was removed from the wall overlooking the Governor’s desk on 25 January 1939.  Governor James H. Price, along with purchaser John Stewart Bryan, found a new home for the portrait at the College of William and Mary, where Bryan was President.  The painting remained property of the Commonwealth of Virginia, and was given the new title of “Muscovite Ambasssador,” until the Muscarelle Museum of Art at the College of William and Mary opened.  It then became a part of their permanent collection as “Portrait of Peter John Potemkin,” attributed to artist Gasper Schmidt.