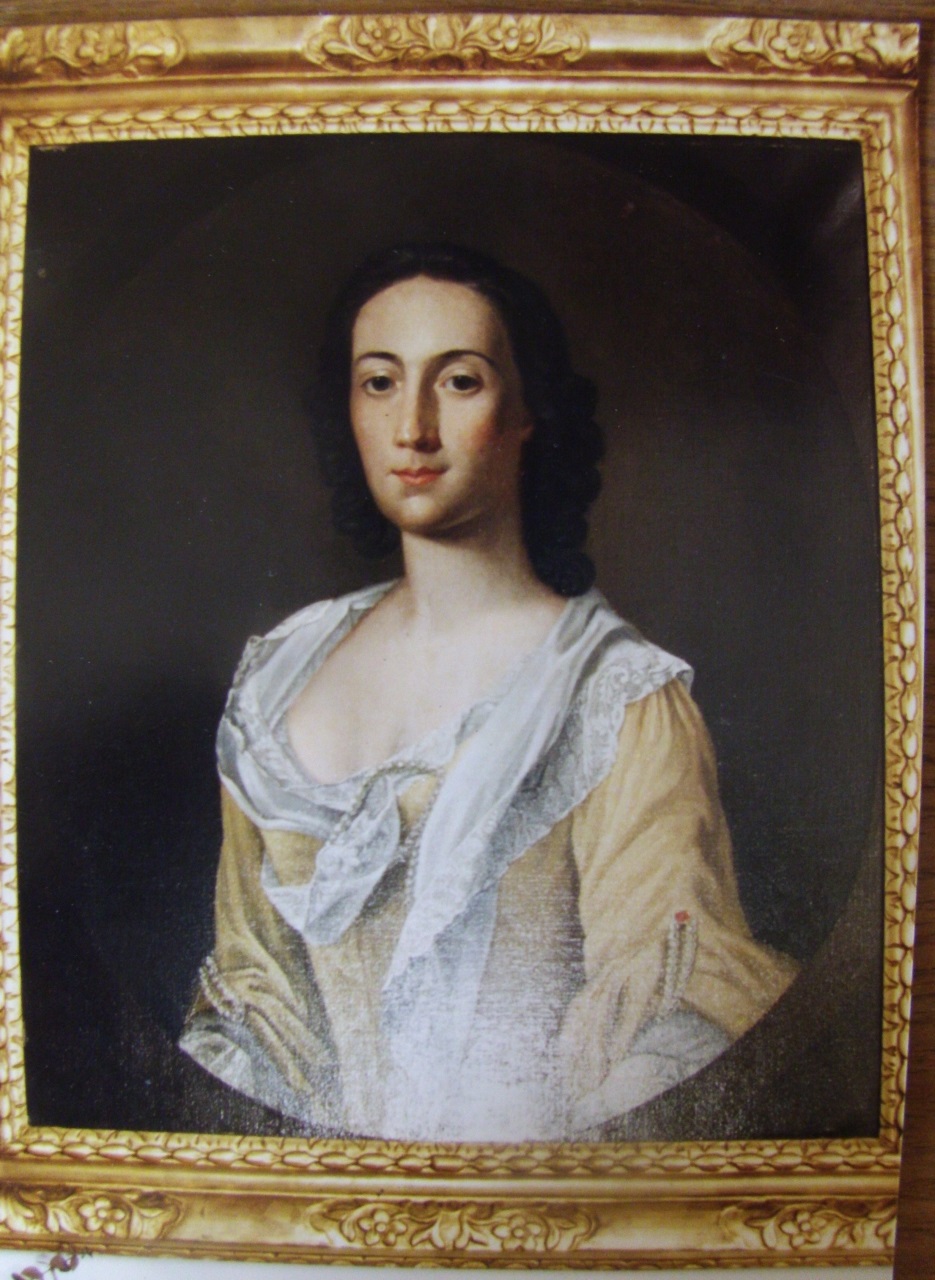 The Women of Smithfield

Processing of the Montgomery County chancery began in August 2013, and one of the early finds was Chancery Cause 1848-016, Letitia Floyd vs. Executors of Elizabeth Madison, which involved two locally well-known Virginia families, the Prestons and Floyds.  While much of the history of these families revolves around the military, economic, and political exploits of the men, this particular suit reveals great politicking among the females as well. Additionally, this case permits researchers to evaluate changes in women’s economic and social status over several generations.

William Preston, an Irish immigrant who arrived in Virginia in 1737, moved to western Virginia and became a surveyor in Augusta and Botetourt Counties.  He fought in the French and Indian War, became an officer in the colonial militia, and eventually served in the House of Burgesses and as a sheriff and surveyor in Fincastle County. In 1775, he signed the Fincastle Resolutions and helped to recruit soldiers for the militia, ultimately serving as a colonel in the newly-created regiment mustered from Montgomery County.  Preston and his friend and fellow surveyor, John Floyd, (among others) advanced land claims for prominent Virginians by surveying tracts (legally and illegally) in Kentucky.

Numerous local and area histories celebrate adventurers and pioneers but few of these accounts consider the experiences of the women who carved out a home for their families in the West. In 1761, William Preston married Susanna Smith, and the young couple eventually put down roots in Montgomery County and established a new plantation in 1773, called Smithfield after Susanna’s family.

The Prestons had twelve children.  Their eighth child, James Patton Preston, was the first to be born at Smithfield, and he would go on to serve a term as Virginia governor from 1816-1819. Colonel William Preston died in 1783, leaving Susanna to raise and educate their younger children, the last of whom, Margaret, was born shortly after her father’s death. Although James Patton Preston inherited Smithfield Plantation as a provision in his father’s will, Susanna remained at Smithfield and retained use of the estate through her dower rights for nearly 40 years.

When Susanna died in 1823 many of her personal possessions went to her daughters and granddaughters; Susanna’s eldest daughter, Elizabeth Madison, served as administratrix.  The chancery cause of Letitia Preston Floyd, another of Susanna’s daughters, brings suit against executors of Elizabeth Madison’s estate.  Letitia Preston Floyd was a well-connected woman in her own right.  Her husband, Dr. John Floyd, served a term as Virginia’s governor, as had her nephew, James McDowell, and her son, John B. Floyd, was elected governor in 1849. 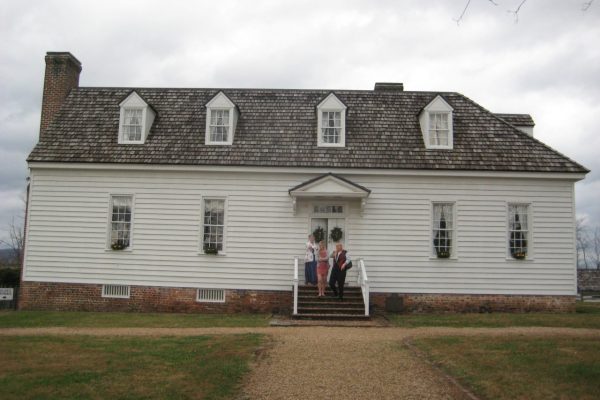 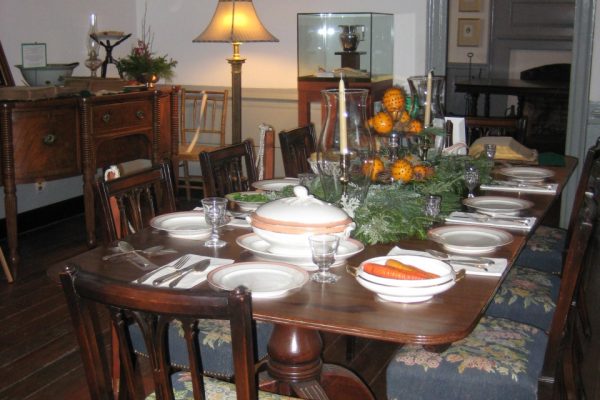 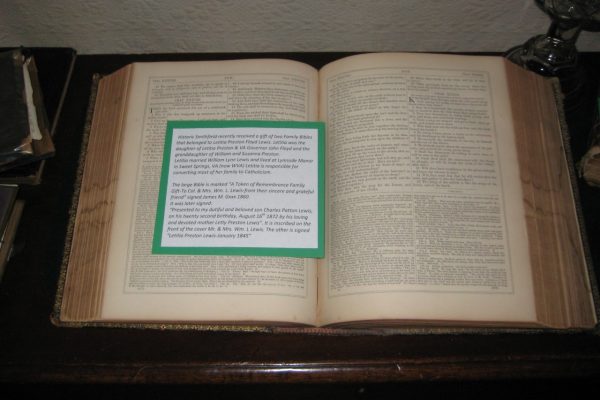 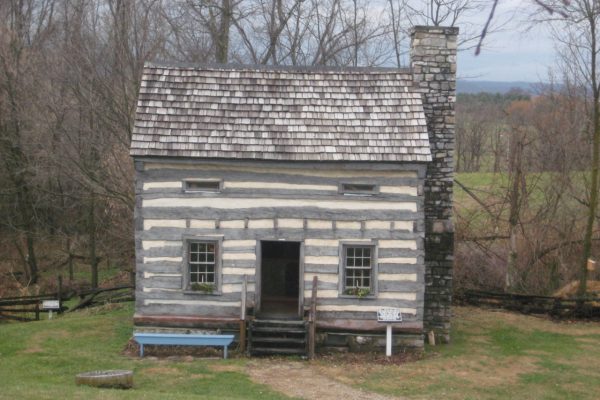 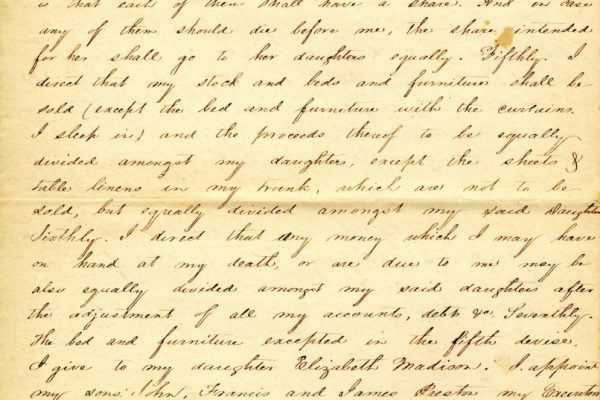 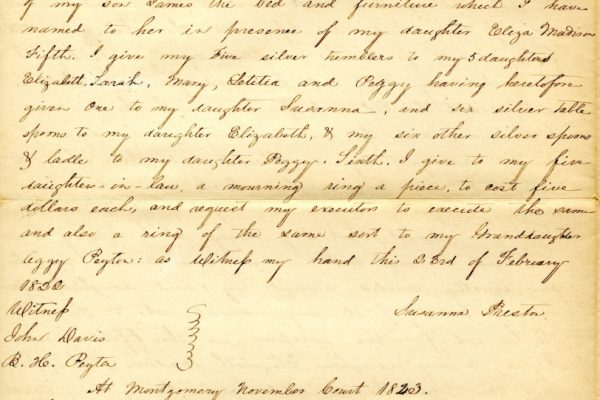 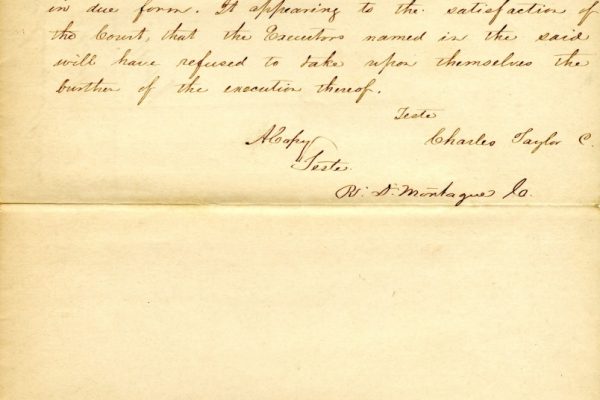 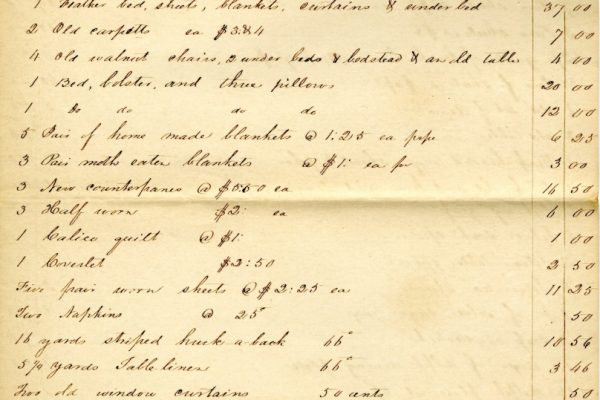 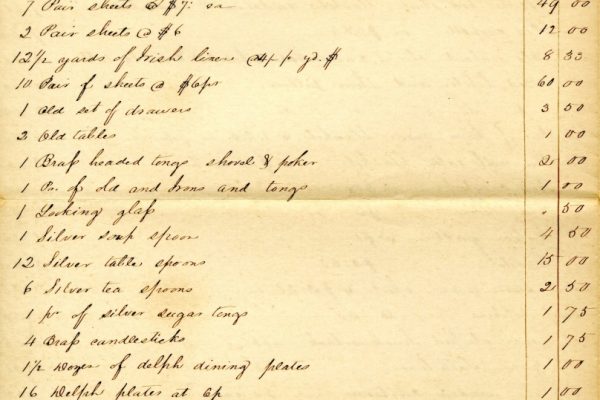 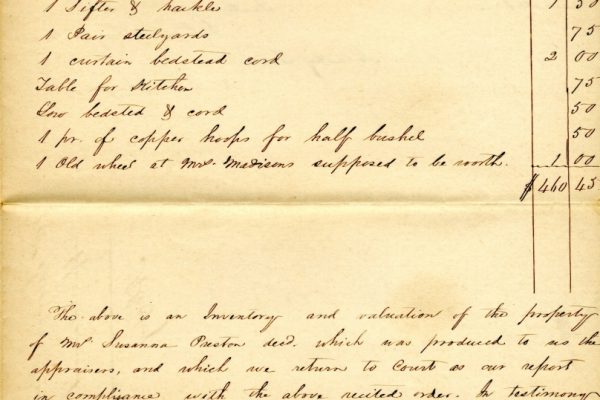 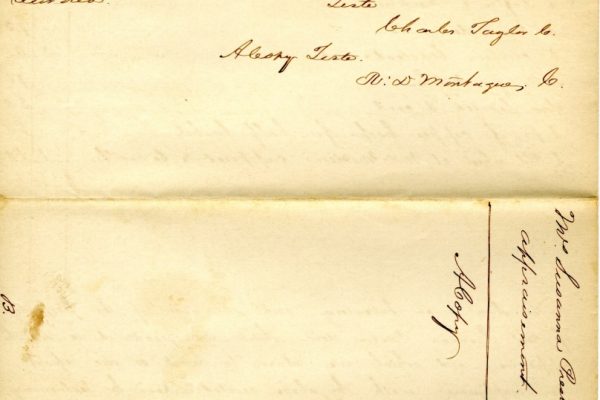 Letitia claimed that portions of her legacy were denied to her by the executors of her sister’s estate because of a bond owed to her mother by Letitia’s husband, Dr. John Floyd.  However, Letitia pointed out that her mother was indebted to Floyd for an amount larger than that of the bond owed by him, thus effectively cancelling the obligation of the original bond as he was “a creditor rather than a debtor to said estate.” B. H. Peyton, one of the executors in the case, argued that Letitia’s suit was invalid since her legacy (and the case itself) should have been under the control of her husband. Responding pointedly to this criticism, Letitia claimed that though her husband “never exercised any ownership of my mother’s legacy,” she still consulted him for advice as she thought this was “proper.”  Apparently the judge agreed with Letitia’s argument and she recovered $218.38 plus interest as a result of the final decree.

Records from the chancery cause include copies of both Susanna’s will and that of her eldest daughter, Elizabeth Madison.  Susanna’s will makes very specific bequests for shares from the Virginia Bank to go to each of her six daughters with the instructions that “in case any of them should die before me, the share intended for her shall go directly to her daughters.” Other provisions of the will direct that Preston’s livestock, as well as most of her furniture and beds, were to be sold with the proceeds split amongst her daughters.   More personal possessions, such as linens, silver, and Susanna’s own bed, are likewise to be distributed to her daughters. In an 1817 codicil to her will, Susanna requested the purchase of a family Bible (“at the cost of ten dollars”) to be given to her daughter Letitia. Letitia Floyd remained the family’s historian, and several letters to her son serve as memoirs of the Preston and Floyd families. 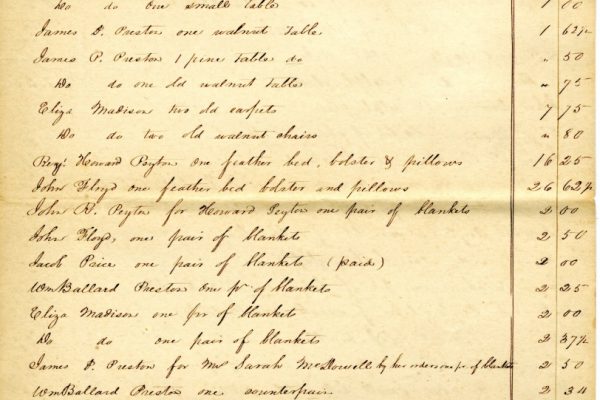 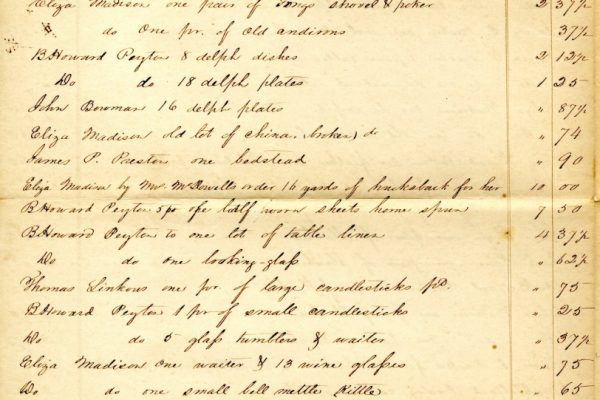 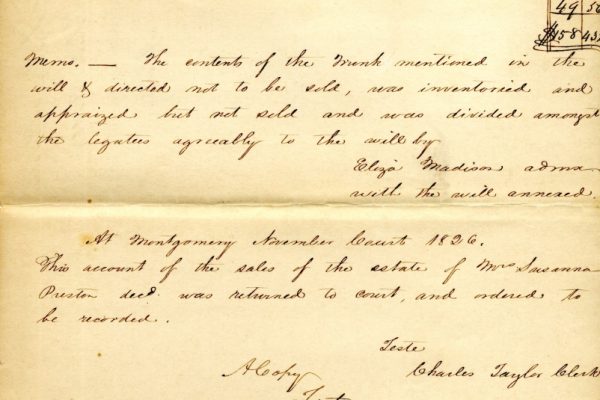 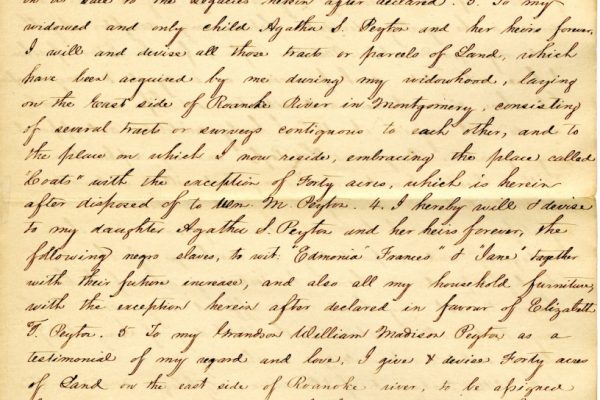 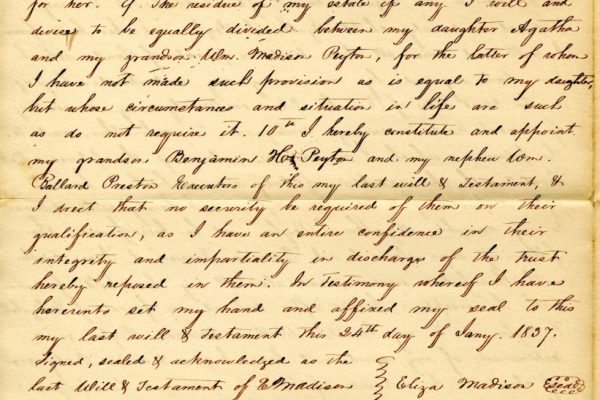 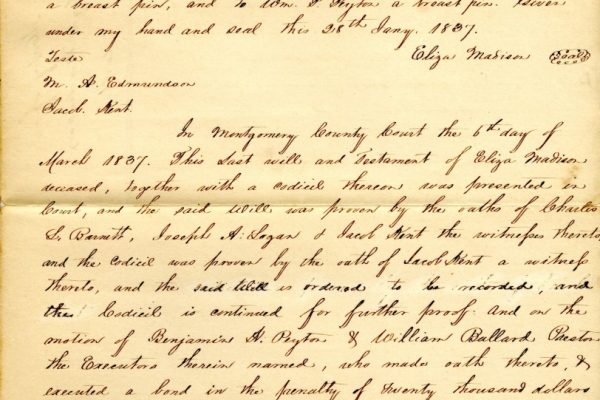 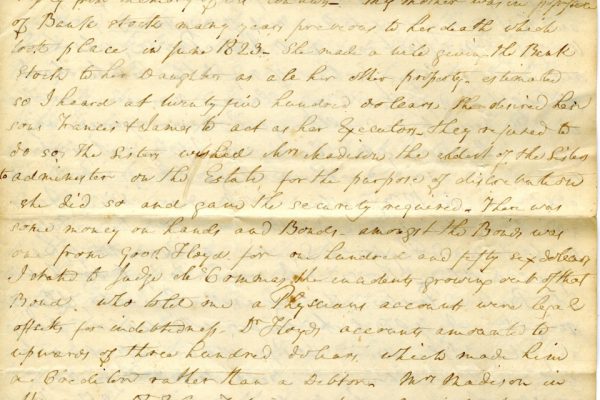 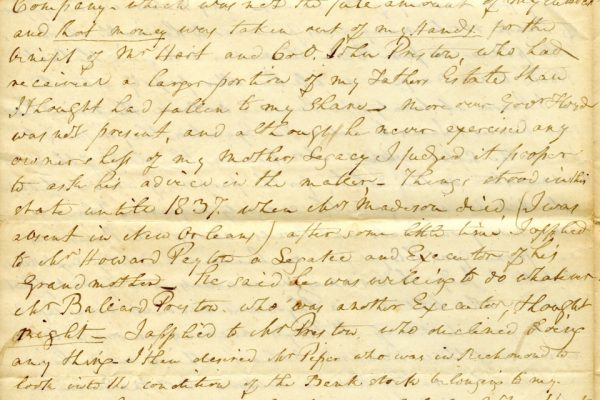 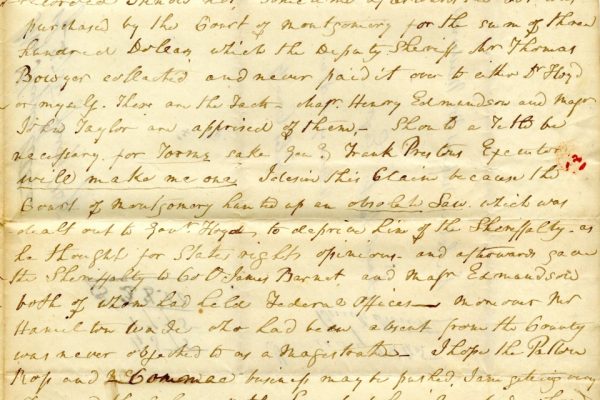 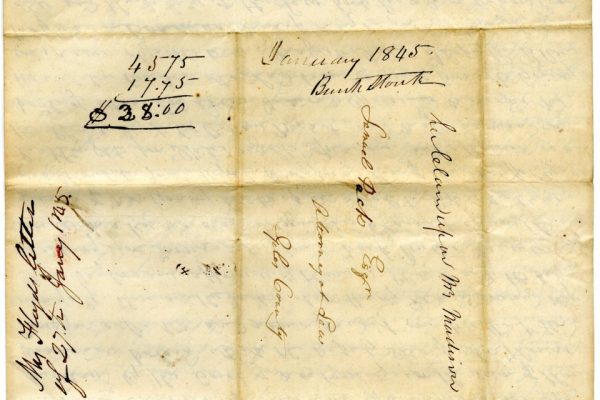 Similarly, Elizabeth Madison’s will makes very specific bequests of personal items to her grandson’s wife, providing her with a mourning ring and a set of silver tumblers bearing the initials “S.P.”  (Susanna Preston).  Both of these items were likely from Susanna’s own bequest to Elizabeth.   Other family mementoes include a bequest made by Elizabeth to her nephew, William Ballard Preston, of a breast pin “containing my father’s hair and the date of his birth & death.”  Elizabeth’s will differs from her mother’s in several ways as well.  Although both women were widows, Elizabeth had managed to add to her estate after her husband’s death, thus enabling her to administer property “acquired by me during my widowhood” as she saw fit.  Unlike Susanna, Elizabeth also conveyed slaves to heirs of her estate: “Edmonia, Frances & Jane together with their future increase” went to her daughter, Agatha Peyton.  Likewise Elizabeth devised “my negro girl called Martha Redd and her increase forever” to her grandson Benjamin Howard Peyton.

Chancery records such as those found in Letitia Floyd vs. Executors of Elizabeth Madison enable us to see the private bequests made in women’s wills as women conveyed more personal items and materials which, in all probability, they had manufactured for their family.  An analysis of this particular case allows researchers to trace the rise of the Prestons from being pioneers in western Virginia to their status as a politically prominent family in the antebellum period. Today Smithfield Plantation, which lies adjacent to Virginia Tech’s campus in Blacksburg, is a public museum which contains many items donated by the Prestons’ descendants.

The Montgomery County chancery records are currently being processed and indexed as part of a two-year grant program funded by the National Historical Publications and Records Commission (NHPRC). The project is a pilot program coordinated by the Library of Virginia’s Local Records Branch and the Montgomery County Circuit Court Clerk. Unlike previous chancery records projects, Montgomery County’s records will remain in the locality for processing. The new courthouse building, opened in downtown Christiansburg in 2012, greatly expanded the space available for local records and research.