A Muted Celebration: Independence Day, July 4th, 1902–A Quartet of Friday Fourths From the Newspaper Archive of Virginia Chronicle

The Civil War ended 37 years ago.   A Republican, Theodore Roosevelt is President.  A Democrat, Andrew Jackson Montague is Governor.   A state constitutional convention, dominated by Democrats, just disbanded taking the regressive step, as the nation advanced into the Progressive Era, of drastically narrowing the voting rights of blacks.  A Virginia small city editor, like our editors here,  in sympathy with the Democratic party, perhaps now in his late fifties or early sixties and perhaps a Confederate veteran, might be inclined to more quickly recall that lost cause for independence instead of the found of 126 years ago.  See right, from the Lexington Gazette-right column, front page, starting above the fold.

This irascible appeal to the responsibilities of memory is the bluntest expression among our four papers of a lack of enthusiasm over the arrival of Independence Day.  And Lexington, it deserves mention, the home of VMI and Washington and Lee University, was also the final home of Robert E. Lee whose name was attached to the school’s title upon his death in 1870,after acting as its director since the war’s close

Further north in the valley, the Shenandoah Herald’s July 4 edition, it’s a challenge to locate anything associated with the holiday.  A brief discussion of rattlesnake imagery in early American flags on the front page could qualify, but only maybe.  Its editor, John H. Grabill, was a former captain in the Confederate cavalry.

At least the editor of the Farmville Herald delivers some assertion out his ambivalence.  As well as a request to put down the bottle: 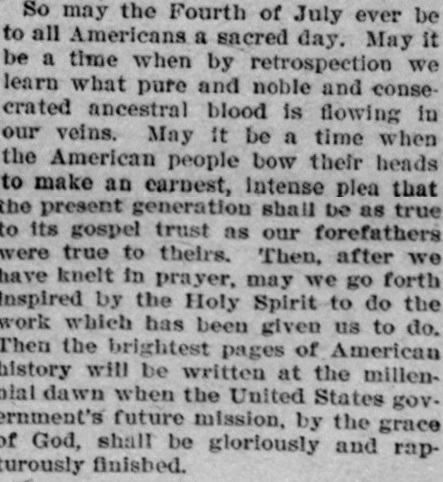 W. McDonald Lee, editor of Irvington’s Virginia Citizen, devotes five full columns to an often diverting account of his delightful journey (including dinner with the Governor) crisscrossing the state.  Mention of the 4th only appears in a regular imported feature of the paper, a reprinting of the Talmage Sermon by Doctor of Divinity and Presbyterian Pastor Frank De Witt.  Excerpt left.

Pastor De Witt’s expansionist vision of Christianity brought to mind another American, similarly ambitious for American expansion,  born into a Presbyterian missionary family four years earlier in China-Henry Luce.  We owe the expression, “The American Century”, delivered in 1941, to Luce, the founder of Time-Life publications.

In 1912 (randomly selecting another example of a new self –consciousness), a young Charles Ives finished an orchestration of the 4th of July movement of his Holidays Symphony.   Within their lifetimes, which extended into the mid twentieth century, took place all those events (no need to recount) which contributed to our modern celebration of July 4th and a vastly altered national self-awareness represented  in newspapers by ritualistic editorials, political cartoons and advertisements…many, many advertisements.  Imagine every consumer item you’ve seen adjacent to an exploding firecracker.  I advise you stop while you are still able.