"Of Liquid Death, To Which Men Flee:" Temperance Reform Efforts in Antebellum Norfolk

Restricting the use of alcohol was not a novel idea in the Roaring Twenties when Prohibition banned illicit spirits nationwide. Inspired by the reforming impulses of the Second Great Awakening, civic leaders across the country prior to the Civil War worked to curb alcohol consumption, which they viewed as a threat to the individual and society. One temperance advocate wrote, in the 18 March 1847 issue of the American Beacon and Norfolk and Portsmouth Daily Advertiser, that great efforts were needed for the “extermination of the ruinous flood which belches forth from the distillery, the extinguishment of the liquid fire, which has so long been the devil’s chief instrument in peopling jails, alms houses, hospitals, jails, grave-yards, and the bottomless pit.” By eliminating one of the root causes of society’s ills—drunkenness—businessmen, religious leaders, and reformers sought to help the intemperate become productive members of society and by extension elevate the community. 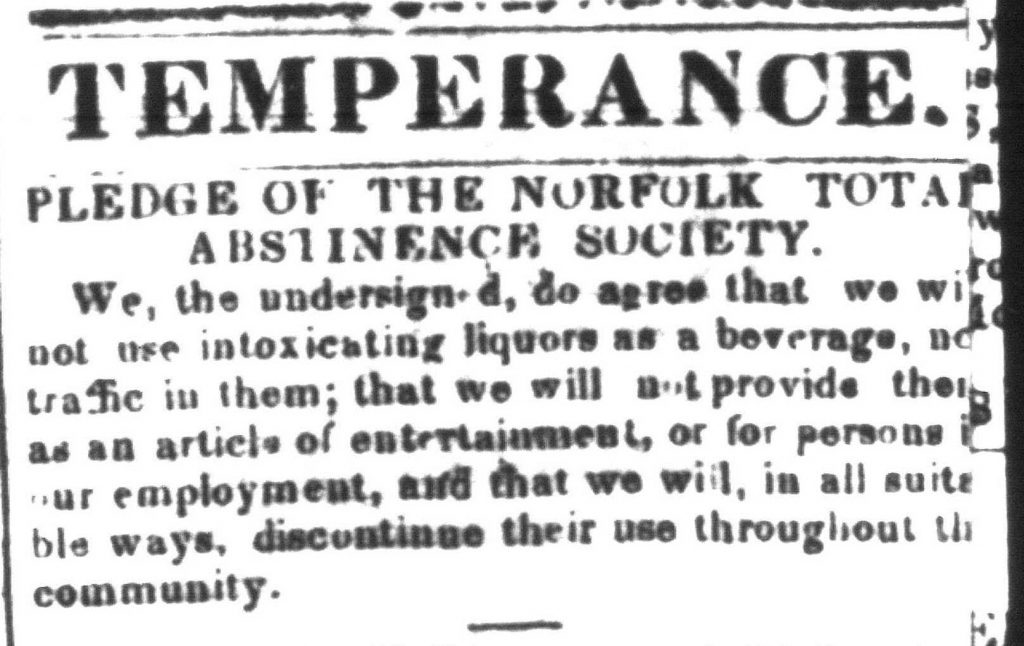 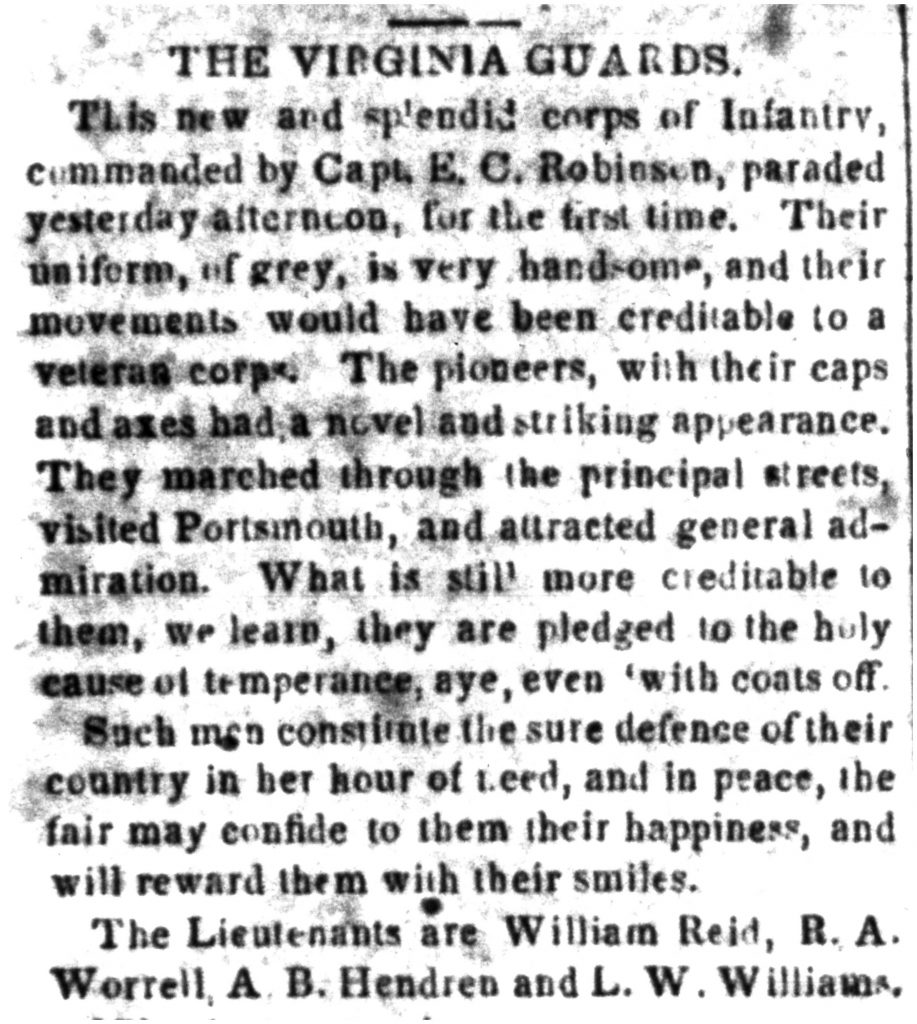 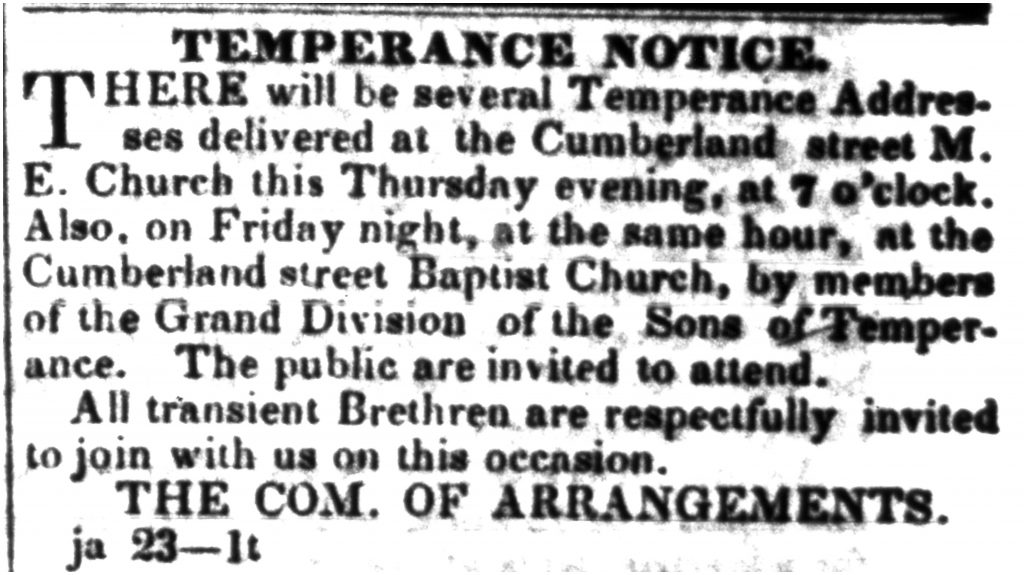 Norfolk’s stagnant economy during the 1840s and 1850s pushed local boosters to embrace temperance organizations to help revive the city’s fortunes. By November 1841 teetotalers could attend a meeting of the Norfolk Total Abstinence Society and five years later the Young Men’s Temperance Society was organized. Reformers aimed their efforts at males arriving in the seaport who might be open to temptation and vice; during this period it would be unthinkable that young women would even need a temperance society.

In commenting on the establishment of the Virginia Guard, a militia company based on abstinence from alcohol, one newspaper editor in March 1842 remarked that “they are pledged to the holy cause of temperance, aye, even ‘with coats off.'” The sober Virginia Guard stood out in an era when distilled spirits fueled militia companies’ rowdy social gatherings. Organizations such as the Young Men’s Christian Association and Seamen’s Friend Society also worked to keep young men away from Norfolk’s wicked temptations. Reformers established one of the first Virginia branches of the Sons of Temperance when the Washington Division was chartered in April 1843, followed by the Wesleyan Division in April 1847.

The Norfolk Total Abstinence Society met at least monthly and featured lecturers (including reformed drunkards) from Virginia and cities like Baltimore and New York.  All persons “friendly or unfriendly to temperance” were invited to attend these meetings and newspapers reported large audiences present and those who signed their names to the pledge:

“We, the undersigned, do agree that we will not use intoxicating liquors as a beverage, not to traffic in them; that we will not provide them as an article of entertainment, or for persons in our employment, and that we will, in all suitable ways, discontinue their use throughout the community.”

During the 1840s William Cunningham and his American Beacon—the most widely-read paper in the city—promoted the efforts of the Total Abstinence Society by publishing meeting notices, articles, and temperance news from around the state and nation. On 18 March 1847 he published the fiery poem Intemperance, reprinted from the Old Colony Republican (Taunton, Massachusetts), that included the stanza:

Indignantly
Oh God! look down—
Cast on this sea
Thy withering frown—
This burning sea
Of Liquid death,
To which men flee

To taint their breath—
Their blood to burn
With wasting fires,
Their hopes to turn
To hell’s desires, —
Whose waves roll o’er
Crime’s darkness and vice,
With ceaseless roar
For sacrifice

During a short period in the mid-1840s interested citizens could read the weekly Virginia Temperance Advocate. Editor (and officer in the Total Abstinence Society) William S. Forrest announced the newspaper in the American Beacon on 8 April 1847 and outlined the task of helping those who imbibe “liquid death,” as “nearly half a million of our countrymen are worse than slaves to the worst of tyrant! Burdened, blistered, and scorched, by the hot chains that bind them, —their tears and their wretchedness, the loud wailings of their wives and children, appeal imploringly to every sober man for his aid.”

Despite the rhetoric, the Virginia Temperance Advocate failed to find a lasting audience. And assistance for those suffering from alcohol abuse declined as well. Membership in the Virginia Sons of Temperance dropped from more than 17,400 in mid-1852, to less than 6,500 by the end of 1857. As the sectional crisis heated up during the decade temperance became connected with the northern abolition movement. To be sure, William Cunningham would not be reprinting anything from the Massachusetts-based Old Colony Republican anytime soon. Although temperance organizations limped along after the Civil War, Norfolk stayed “wet” until the Virginia Prohibition Act, also known as the Mapp Act, established a statewide ban on alcohol in 1916, followed by national Prohibition with the 18th Amendment in 1919.