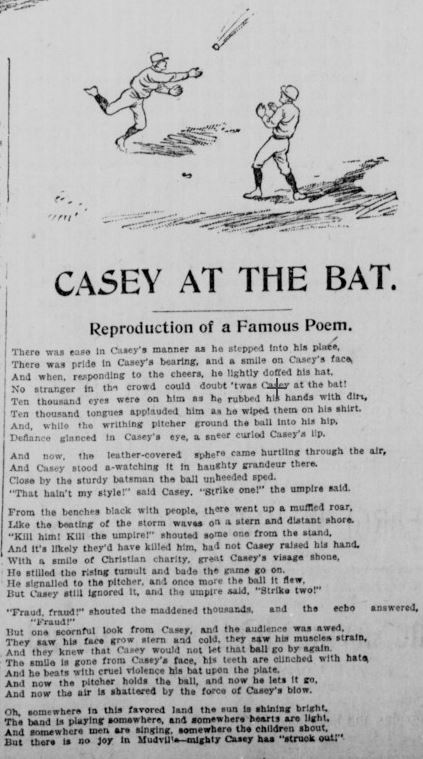 Mighty Casey Has Been Edited

By Errol SomayApril 26, 2019June 24th, 2021No Comments
April is a special time of year: the first full month of Spring; the beginning of baseball season (Hallelujah!) and the month designated as Poetry Month. So in honor of these two important points on the country’s cultural calendar, and combining the two art forms – poetry and baseball – Team Newspaper Project thought it would be of interest for readers to visit one of the great short yet epic poems of the late 19th century: “Casey at the Bat.” 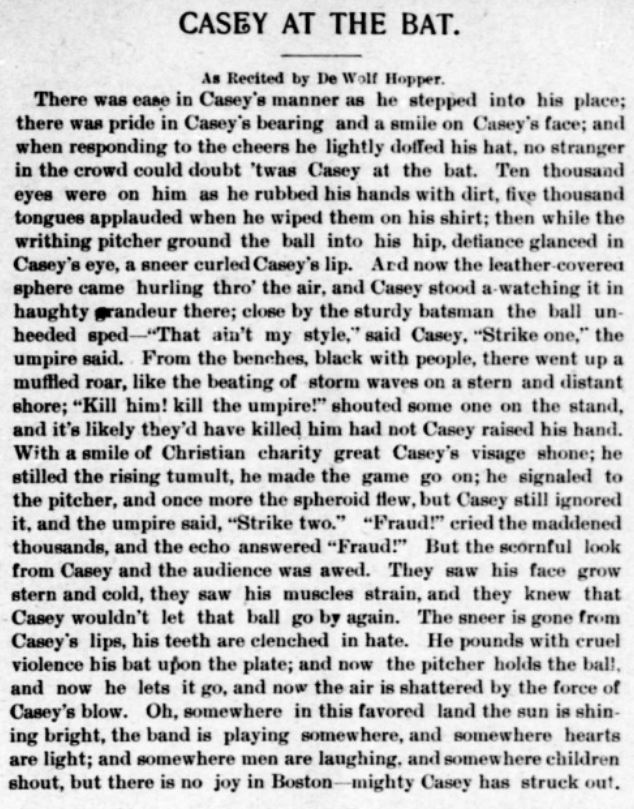 Newspapers around the country published the poem by Ernest L. Thayer many times over the years. It is interesting to note that the poem, while steeped in the details and lore of baseball, was written in 1888, a time that might be described as the game’s childhood. While the Harvard educated Thayer might have been satisfied with his paean to the American pastime, it is hard to say if he was happy with the fact that he never wrote anything that made close to the same impact on the American psyche as the story of the great slugger for the Mudville Nine.

Newspapers had a habit of playing fast and loose with a poem’s content, especially if it was considered boilerplate or something that was not specifically local but possibly of interest to readers. Proof of that revealed itself in my first search of “Casey at the Bat:”

The version that appears in the Courier notes that the poem was recited by the actor/ comedian, DeWolf Hopper. Like Thayer, Hopper’s greatest claim to fame may lie in his estimated 10,000 plus recitations of “Casey at the Bat” during his career – though that distinction could be nudged out by his nine-year marriage to Hedda Hopper, legendary Los Angeles Times gossip columnist.  His legacy as an actor with a deep voice appears to have faded into the mists of time.

Another version found in the Richmond Dispatch also deletes the first part of the poem. It seems it was not uncommon for this abbreviated version to serve as THE version of Casey, even to the point of deleting Mudville and substituting the name of another town.

Anyone who doubts the legendary status of “Casey at the Bat” need go no further than to learn that Disney created a classic eight minute cartoon based on the poem in 1946. Also, it seems it was worth a claim of authorship by William R. Valentine, a New York newspaperman who professed to penning the baseball epic.

But back to the poem and a complete version, which you will find below, unexpurgated. A nice poem as we drift toward the end of Poetry Month while baseball, a six month sporting journey like no other, is now going full tilt around the country.