Unclaimed property from banks, estates, or other repositories often ends up in the possession of the Virginia Department of the Treasury. If they are not claimed within 20 years, papers and other items are transferred to the Library of Virginia, where they are filed and catalogued by lot number. The files may be viewed in the Archives Research Room.

Two lots from Norfolk contain the naturalization papers of Chinese immigrants Ow Chuck Sam (Lot 778) and Eng Yick Yu (Lot 4976934). Ow Chuck Sam was naturalized on 19 May 1944 by the U.S. District Court for the Western District of South Carolina in Spartanburg, and Eng Yick Yu was naturalized by the U.S. District Court for the Eastern District of Virginia in Norfolk on 30 January 1948. They lived within half a mile of each other in Norfolk—Ow at 326 Freemason Street, and Eng at 310 Boush Street.

The path to naturalization was surely difficult for both men due to laws that restricted Chinese immigration and naturalization. In fact, according to census data, there were only 543 Asian and Pacific Islanders in Virginia in 1940. 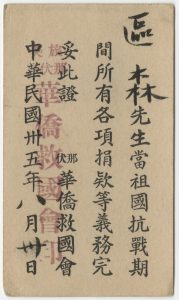 In 1790, the first federal naturalization law stated that only those who were white could become citizens. Starting in 1870, those who were from Africa could be naturalized. The federal government began to place restrictions on Asians in the years that followed, in part because of fear that the Chinese would take jobs from U.S. citizens. In 1882, the Chinese Exclusion Act dictated that Chinese laborers were not permitted to enter the U.S. for ten years, and the restriction was made indefinite beginning in 1888. Certificates were required of Chinese laborers who were already in the U.S. and for all Chinese prior to arrival, and the requirement extended to all Chinese immigrants in the U.S. in 1893. Those who were from China were barred from citizenship. The 1917 immigration act created the Asiatic Barred Zone, which excluded residents of Asia who were not natives of islands possessed by the U.S. unless they were members of exempt professions, travelers, or wives or children of those who were exempt. This zone included most of China. Finally, in 1943, the Chinese Exclusion Act was repealed, and Chinese immigrants were given the option of citizenship. According to census data, the number of individuals in Virginia who were recorded as Asian and Pacific Islanders rose accordingly to 1,403 by 1950.

Ow Chuck Sam and Eng Yick Yu are difficult to track. For example, even though both of them resided in Norfolk, Ow is never included in Norfolk city directories, and Eng is included only once, in 1949.

Ow Chuck Sam was born in China on 14 September 1897 to Ow Gwee Tong and Wong She (or Wangshee). His given place of birth varies: Sun Hing, Gee Seung, Sen Hing, or Canton. Wong She, Ow Chuck Sam, and Wong She’s daughter, Tuey Pen (or Tang Fan), left Hong Kong aboard the S.S. Empress of Russia on 16 July 1913 and embarked at ports in China and Japan before arriving at Vancouver in British Columbia on 2 August 1913. The two women were admitted to the U.S. on 11 September 1913, but Ow Chuck Sam was initially denied entry into the country. He appealed his case and was finally admitted on 25 October 1913, when he arrived in St. Albans, Vermont, via the Canadian Pacific Railroad. Ow Chuck Sam was a grocer in China but intended to be a student in the United States. The three intended to reunite with Ow’s father, who was a merchant in Boston living at 30 Oxford Street. Ow was listed as a resident of 63 Beach in Boston when he registered for the draft on 5 June 1918.

In 1919, Ow left the United States and returned two years later, arriving once again in Vancouver. On 16 February 1942 when he registered for the draft, he resided at 326 East Freemason Street in Norfolk and worked at the Hong Kong Restaurant at 786 Monticello Avenue. After being drafted in November 1942, he enlisted in Richmond as a Warrant Officer, eventually becoming a Technician Fourth Grade. He listed his occupation as a cook. He and his wife, Mock Soo On (or Mack Son On), were separated and had one child. Even though he had resided in the United States for two decades and was drafted into the U.S. military, his official border crossing took place on 14 April 1944, when he arrived in Detroit through the Detroit-Windsor Tunnel. By then, he was a member of Company B, 40th Infantry Training Battalion Special Training Unit, out of Camp Croft, South Carolina, and on furlough until 19 April 1944. He was naturalized on 19 May 1944. Technically, he had only been in the United States for one month! Such a quick naturalization was possible under the laws of the time, which allowed military personnel to expedite the process by omitting residency requirements and the first step of the two-step process: filing a declaration of intention. The law was passed in 1942, but Ow waited until after the repeal of the Chinese Exclusion Act in 1943 to apply for citizenship. 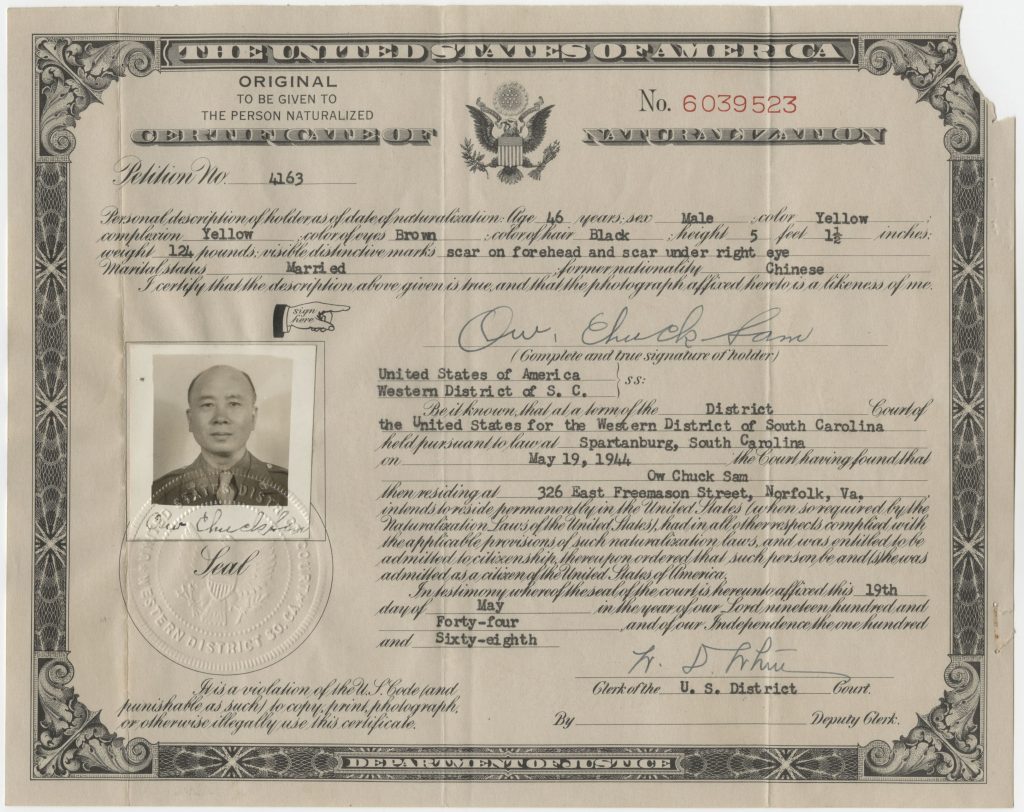 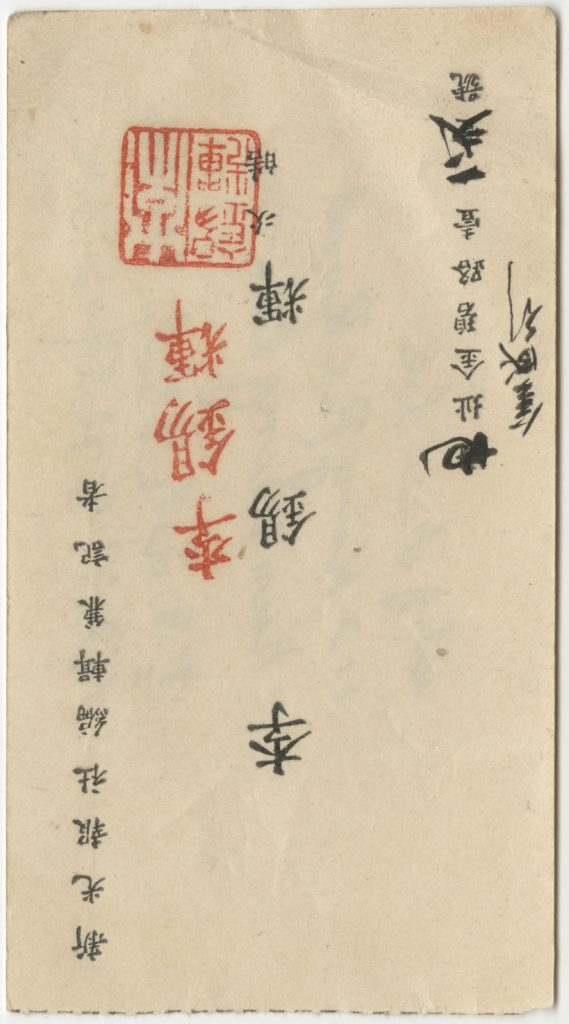 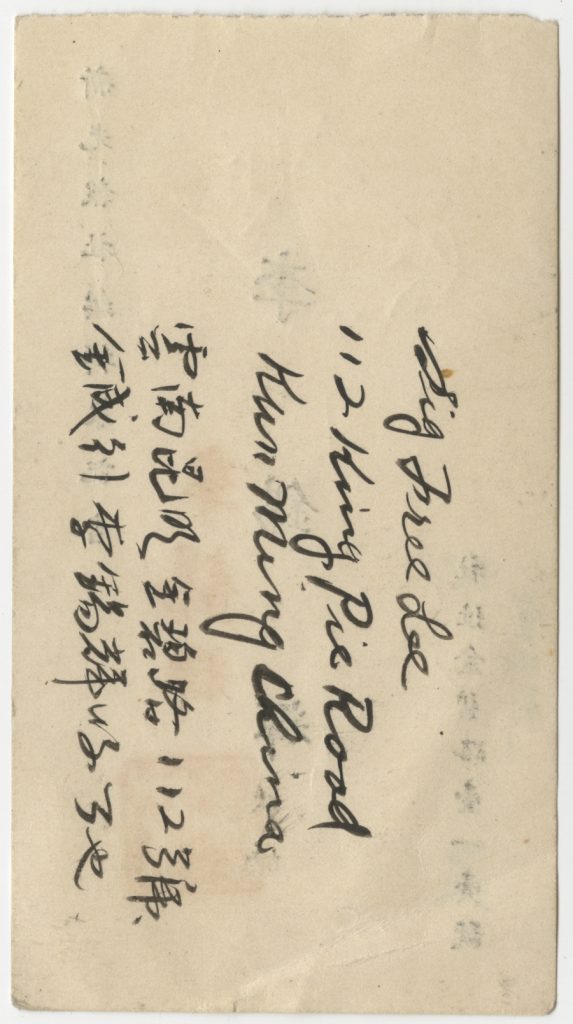 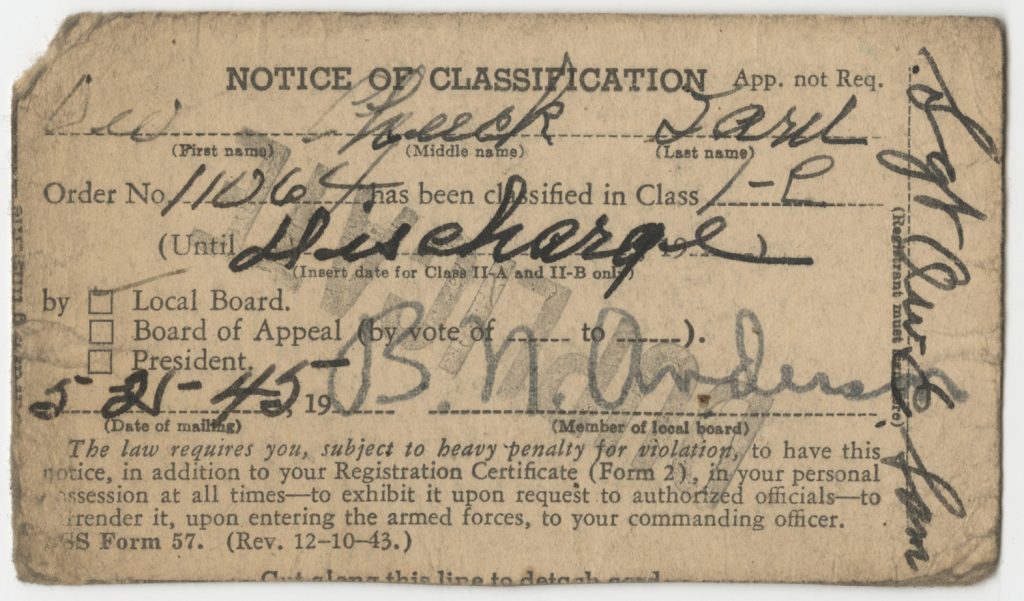 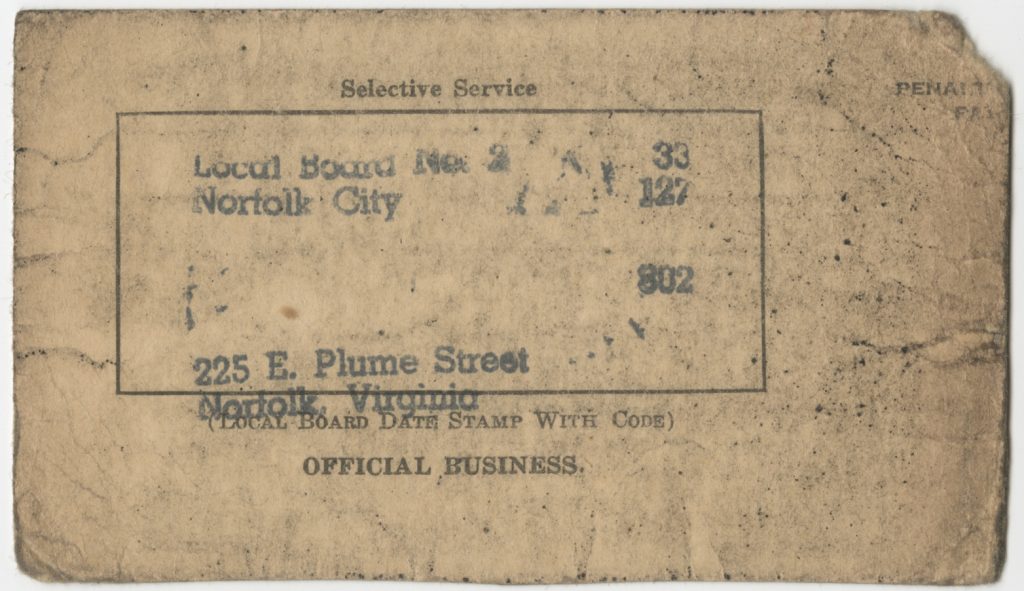 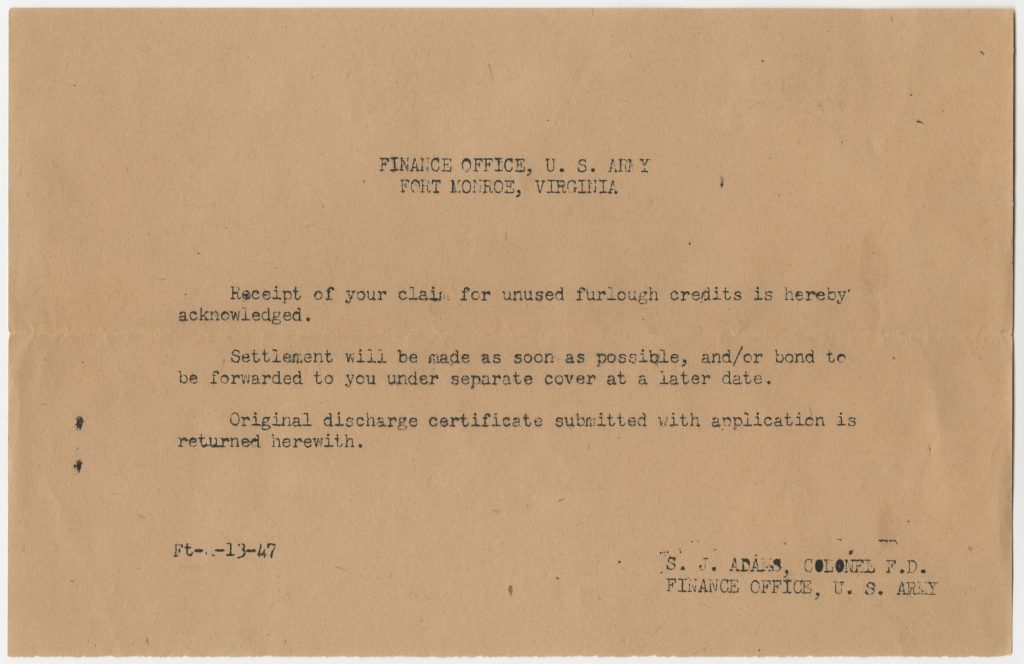 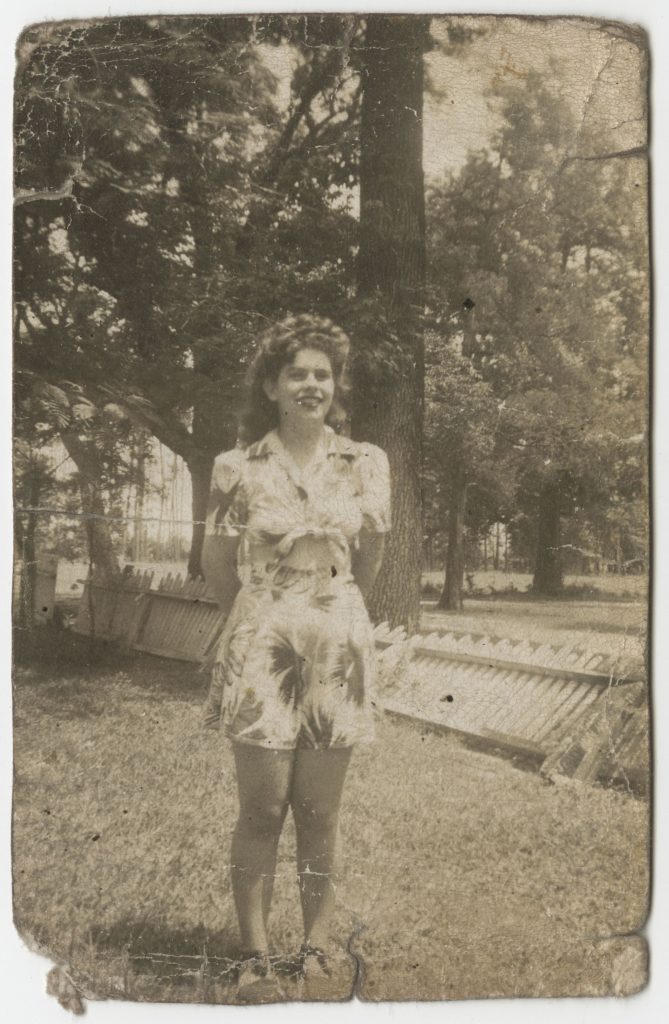 Much less is known about Eng Yick Yu. His 1942 draft card and death certificate from 1952 indicate that he was born in Canton, China. His naturalization certificate from 1948 indicates that he was born on 10 April 1881, while his draft card gives a birth date of 23 April 1891, and his death certificate indicates that he was approximately 62 years old, which would mean he was born circa 1890. His residence is also uncertain. His naturalization record and death certificate list his residence as 310 Boush Street. His draft card notes that he resided at the address of his employer, 103 College Place. A 1949 city directory lists his residence as 103 ½ College Place, which is the same address as his employer, Oriental Restaurant. His death certificate confirms that he was a waiter in a restaurant. It is difficult to discern when Eng arrived in the United States, but he was definitely in Norfolk by 1942, and he had to be a resident of the U.S. for at least five years prior to naturalization, which occurred in 1948. He died on 12 February 1952 at Lane’s Nursing Home in Norfolk and was buried in Forest Lawn Cemetery in Norfolk. 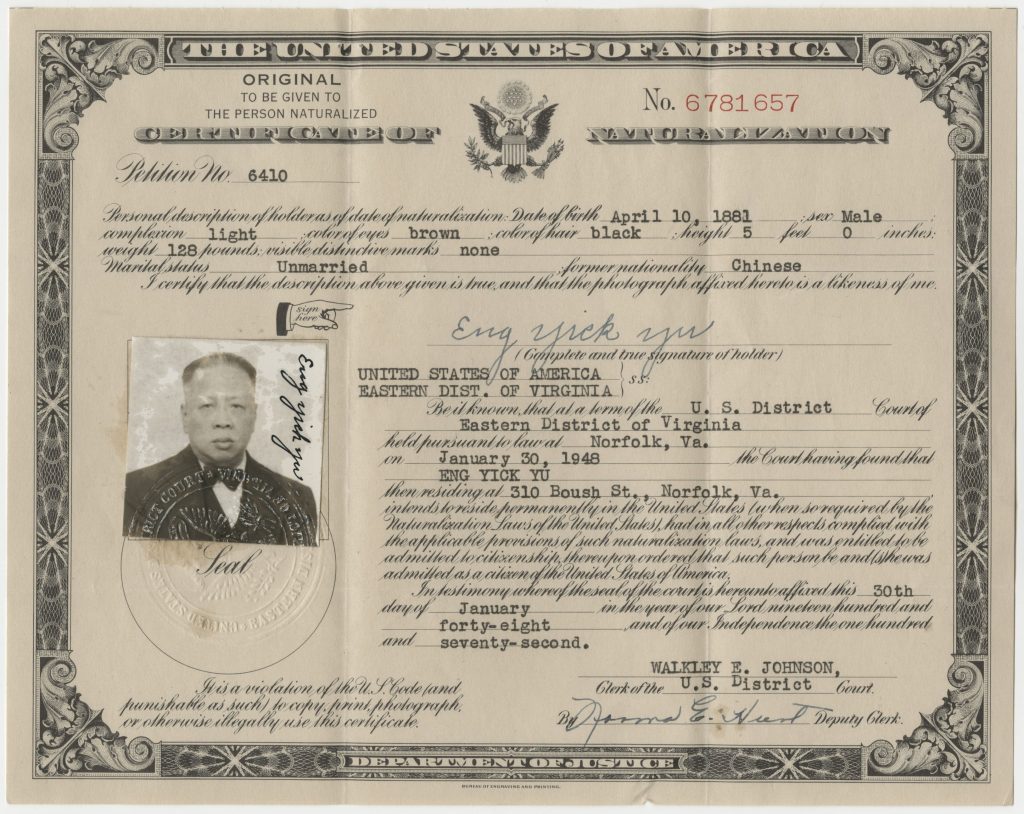 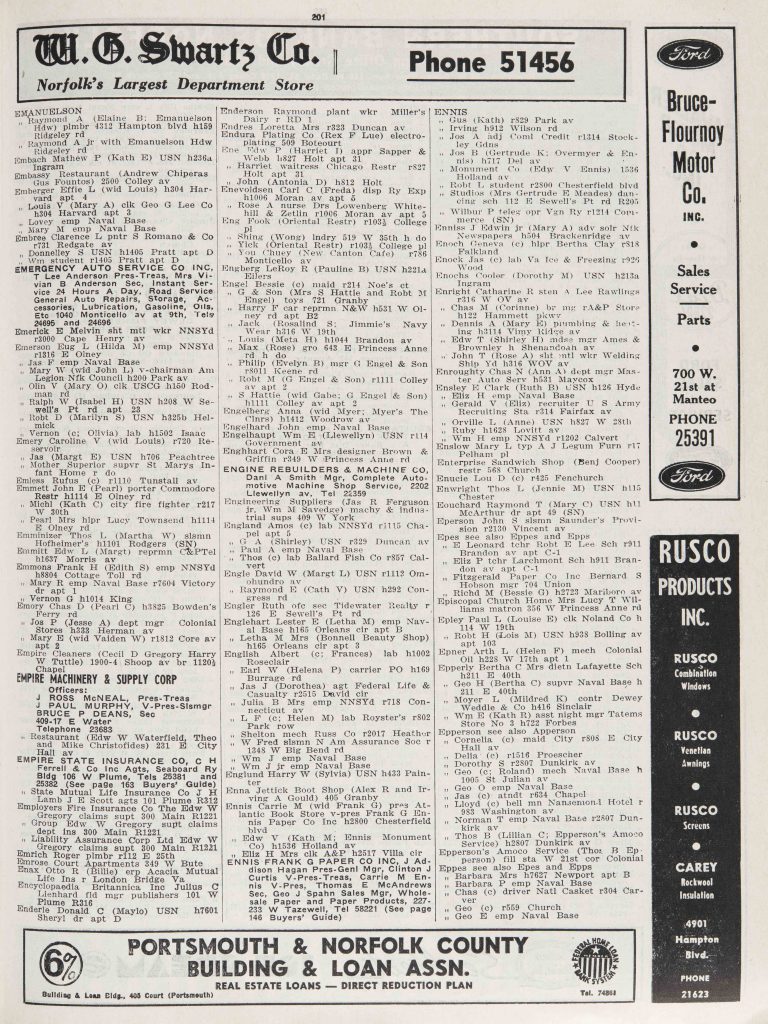 The records of Ow Chuck Sam and Eng Yick Yu are just two of the unclaimed property lots that relate to immigration and naturalization. Others include Iren Maria Marik from Hungary (Lot 13081), Lydia Olivia Sorvali Grimberg from Finland (Lot 13383), and Gladis E. Ocon Manley from El Salvador (Lot 205851). To browse the Unclaimed Property catalog records, search for “Virginia. Dept. of the Treasury. Division of Unclaimed Property.”

To learn more about immigrant experiences in Virginia and see documents relating to Ow Chuck Sam, check out the Library’s exhibit New Virginians: 1619-2019 & Beyond, through 7 December 2019.