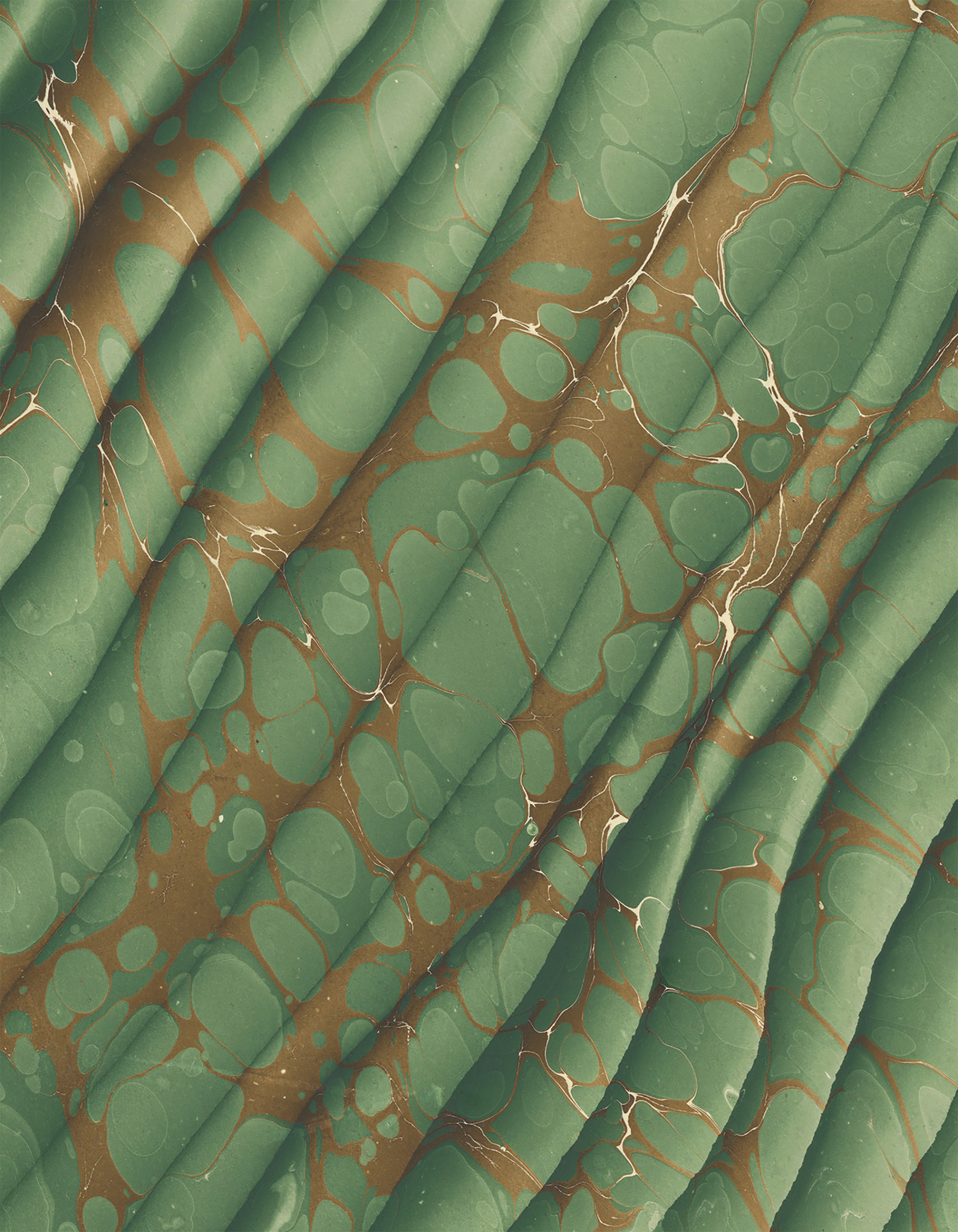 “A condition which is inevitable”: F. E. Alexander and the Struggle for Desegregation

In 1941, Fleming Emory Alexander, printer, journalist, minister, and civic leader, began publishing the Roanoke Tribune, an African American newspaper still in publication today. Issues from 1951 to 1957 are available on Virginia Chronicle, the Library of Virginia’s database of digitized historic newspapers. Described in the masthead of that time as “the only negro newspaper published in Southwest Virginia,” the Tribune served communities from Virginia’s Piedmont to the far reaches of Appalachia. 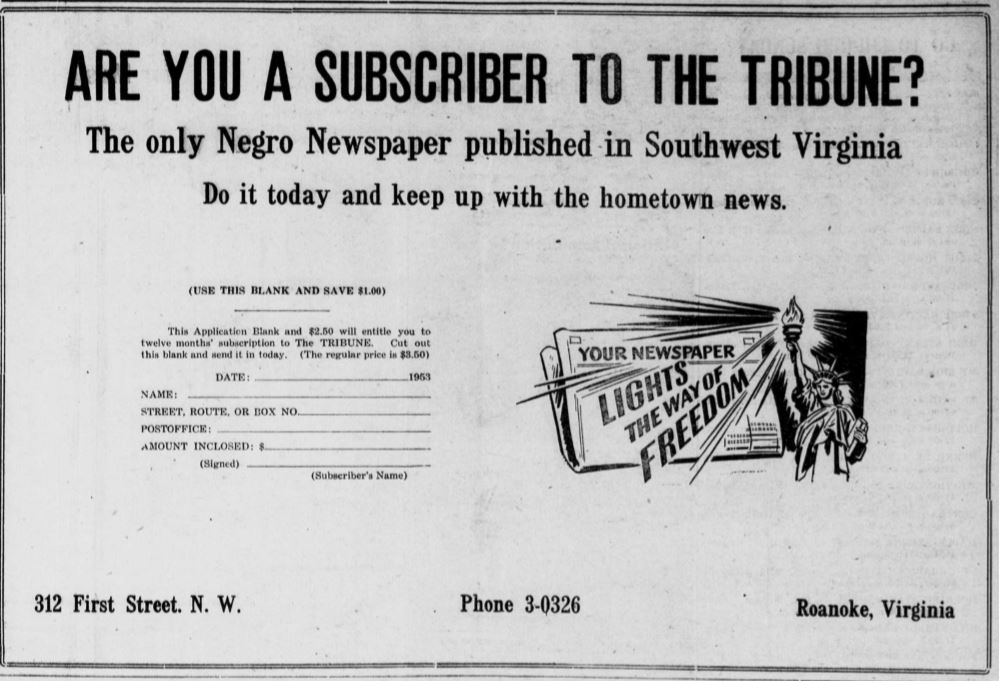 While providing a wealth of information on local happenings in 1950s Roanoke Valley and beyond, these particular years of the Tribune also coincide with the Supreme Court’s Brown v Board decision. At a pivotal point in the nation’s history, F. E. Alexander’s editorial writings offer invaluable perspective on the battle over integration in Virginia.

Alexander was born on 14 April 1888 in Christiansburg, Virginia. After the death of his mother, he and his eight siblings were separated and raised by foster parents. Though his formal education ended around the fifth grade, Alexander learned the printing trade in Kentucky and went on to work for newspapers throughout the South. After serving with the 802nd Pioneer Infantry in France during World War I, he returned to Virginia; by the 1920s, he lived in Lynchburg, where he operated a private printing business and taught printing at the Virginia Theological Seminary.

During the 1950s, the Tribune was published weekly on Saturdays, and each four- to six-page issue included regular local interest columns like “Hollins Notes,” “Buchanan News,” and “Crozet Jottings” along with coverage of statewide, national, and international news. The paper often editorialized on race relations, politics, religion, employment, education, and integration. Birth, wedding, and death announcements, editorial cartoons, photos, recipes, and local advertising also filled the Tribune’s pages each week.

Politically, Alexander was a steadfast Democrat, supporting Harry F. Byrd’s political machine during the 1940s and 1950s. In 1953, as Negro Democratic Campaign Manager of the Sixth Congressional District, he threw his full support behind the Democratic ticket and urged his readers to vote Democratic. “Not only are we Democrats,” he wrote, “but we are loyal, trustworthy Democrats. We are going to stick with the Democratic Party. So let every Negro who has a vote, cast it for the Straight Democratic ticket, Tuesday, November 3rd. You will be mighty glad you did.” 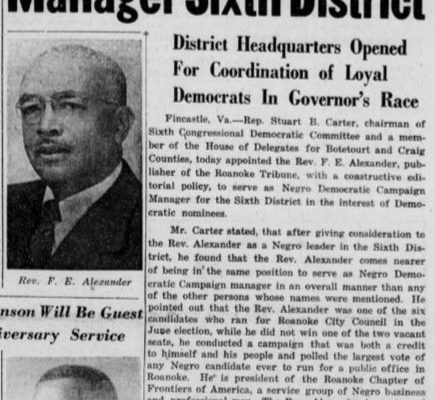 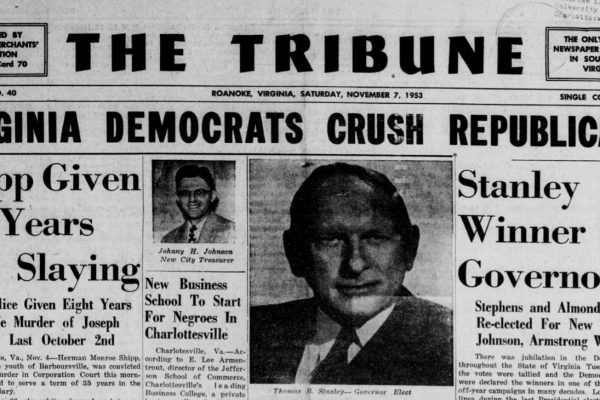 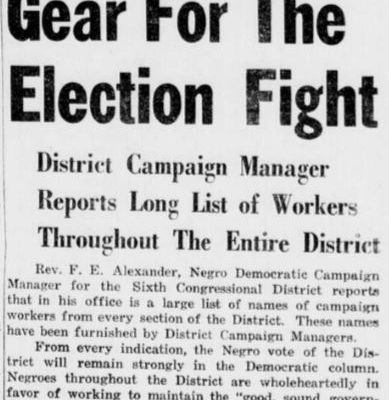 In 1954, when the U.S. Supreme Court ruled separate but equal schools unconstitutional, the Tribune’s headline of 22 May 1954 read, ”SEGREGATION DECLARED UNCONSTITUTIONAL! High Court Decrees It Must Cease.” In an editorial titled “Supreme Court Benefactors,” published the following week, Alexander reminded readers that integration benefited all southerners. “In striking down segregation in public schools,” he wrote, “the court struck the shackles from the souls of all southern white people and enthroned for the first time in nearly 300 years human dignity for all mankind of this nation without regard to race, color or creed.” 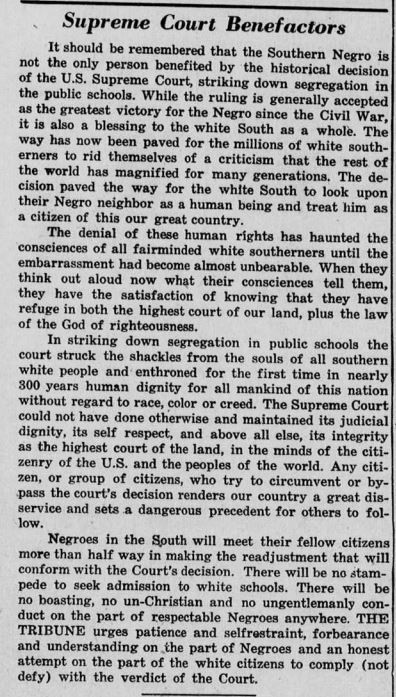 Following the Supreme Court’s decision, Alexander encouraged Governor Thomas B. Stanley, the very governor he had worked so hard to help elect, to meet with community leaders in order to create a peaceful path to integration. Governor Stanley instead joined Harry Byrd, U.S. senator and former Virginia governor, along with other southern Democrats in an unyielding stance against integration. “Believe it or not, this great contest is not over,” Alexander wrote on 14 January 1956. “The proponents have only succeeded in delaying a condition which is inevitable. The sooner we courageously face these facts and soberly and intelligently adjust ourselves accordingly, the better it will be for all of us.”

Unfortunately, we cannot follow Alexander’s editorial writings beyond 1957, because the Library of Virginia’s collection of the Tribune ends in September of that year and does not pick up again until August 1983. According to a history provided by the Roanoke Tribune’s current website, Alexander remained editor and publisher until his retirement in 1971, when his daughter, Claudia Alexander Whitworth, purchased the paper and filled her father’s position. Alexander died in 1980 at the age of 92—an acknowledgment to him on the Tribune homepage reads “Rev. F. E. Alexander, the founder was a legend in his own right. Totally unafraid of challenge, he worked tenaciously, against all odds, to establish and maintain a medium that the Black community could profoundly identify with.”

Please visit Virginia Chronicle to delve into the Tribune for yourself. For more information on F. E. Alexander, read Ann Field Alexander’s entry in Volume I of the Dictionary of Virginia Biography. 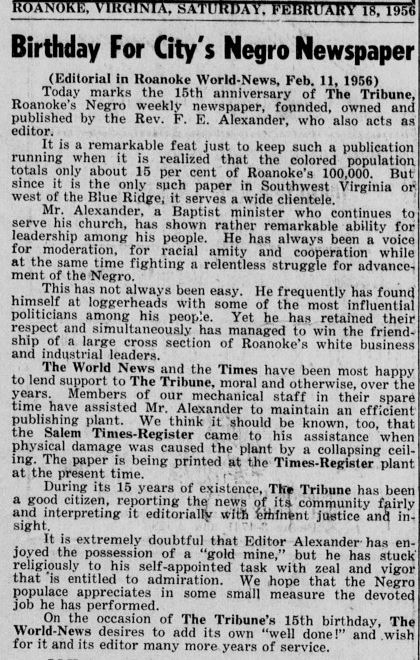 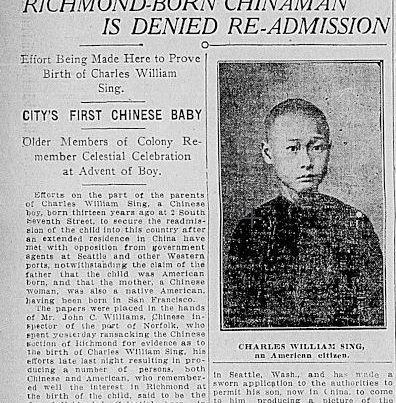