On March 18, 1856, an enslaved man named Richard was charged in the City of Richmond for the crime of aiding and advising Tazewell, his enslaved nephew, to escape from his enslaver. Newspaper accounts and a deposition from the court case shed light on the fascinating details.

The primary witness against Richard was a third enslaved man named Columbus. Virginia law at the time permitted enslaved people to provide witness statements against other enslaved people in criminal trials (though not against white men or woman).1 According to Columbus, Richard had approached him in the store where he worked the previous Friday and asked him if he knew that Tazewell had run away. Columbus replied that he had not. Richard asked him if he had seen the $100 that had been offered in the newspaper for Tazewell’s capture. 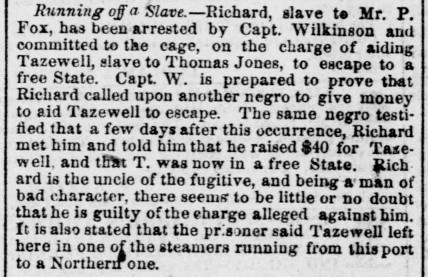 “Running off a slave.”

Richard then requested food for Tazewell, but Columbus replied that he had nothing to give him, so Richard left. Richard returned to the store the next day explaining that Tazewell had “gone in the first boat.” Then the following Monday, Richard returned to the store a third time. This time he changed his story, telling Columbus instead that Tazewell had “gone in off on the cars.” When Columbus asked Richard why he had changed his story, Richard’s explanation was that he was using “a mode of speaking which the boys had.” Columbus didn’t believe that Tazewell could have gotten away on the train cars without being stopped by the conductor, but Richard explained that “two Dutch boys on the Hill” had given Tazewell a pass. Despite Columbus’s refusal to provide food, Richard must have obtained provisions for Tazewell. According to court case documents, Richard had raised $40 to support Tazewell’s journey north, furnishing him with both food and clothing.

A newspaper story published in Richmond’s Daily Dispatch on March 31, 1856 corroborates Columbus’s testimony, reporting that Tazewell actually took a steamer from the port of Richmond to an undisclosed Northern port. Richard’s first explanation of Tazewell escaping via boat had been the more accurate version. Columbus was enslaved by Benoni Catgoni and actually lived in the store which was owned by a Mr. Pedro. According to the newspaper account, Columbus relayed the information gathered from Richard about Tazewell’s escape to the night watchman, which led to Richard’s arrest.

The same day the Daily Dispatch also reported that information had been received in New York that, “Tazewell, slave to Thomas Jones and Henry, slave to Lewis Hyman – have arrived in Canada by aid of the Underground Railroad.” The Alexandria Gazette reported on April 1, 1856 that Richard had received a letter from Tazewell stating that he had arrived safely in “the land of promise.”

In addition to Richard’s help, Tazewell was also aided by individuals involved in the Underground Railroad. Sydney Howard Gay, editor of the National Anti-Slavery Standard, was a chief operative of the Underground Railroad. In 1855 and 1856 he recorded two notebooks documenting the enslaved people who traveled through his New York outpost on their emancipation journeys. The Record of Fugitives, housed at Columbia University, has only recently been studied in detail, principally by historian Eric Foner, who produced new scholarship on the intricacies of these Underground Railroad networks. In addition to names of enslavers and places of origin, Gay’s notebooks include reasons for pursing freedom, details surrounding escape attempts, and even the names of family members that enslaved men and women were forced to leave behind. It seemed a long-shot that Gay may have documented Tazewell’s self-emancipation, but it was worth taking a look. On March 20, 1856 Gay described the following:

March 20th. 1856. Tazwell Robinson, belonged to Thomas Jones, grocer, of Richmond, Va. walked down to City Point a week ago, & concealed himself there on board y steamer Jamestown. Had nothing to eat for three days but a bit of bready size of his hand. Sent to Syracuse with above.

“The above” referred to Tazewell’s traveling partner, Henry Lewis, whom Gay had documented just one line above Tazewell’s entry. Note that Henry is referenced in the Daily Dispatch article as having been enslaved by Lewis Hyman. According to Gay’s notes, Henry Lewis had been trying to escape for eighteen years. He had a free wife whom he had previously sent north hoping that one day he might join her. 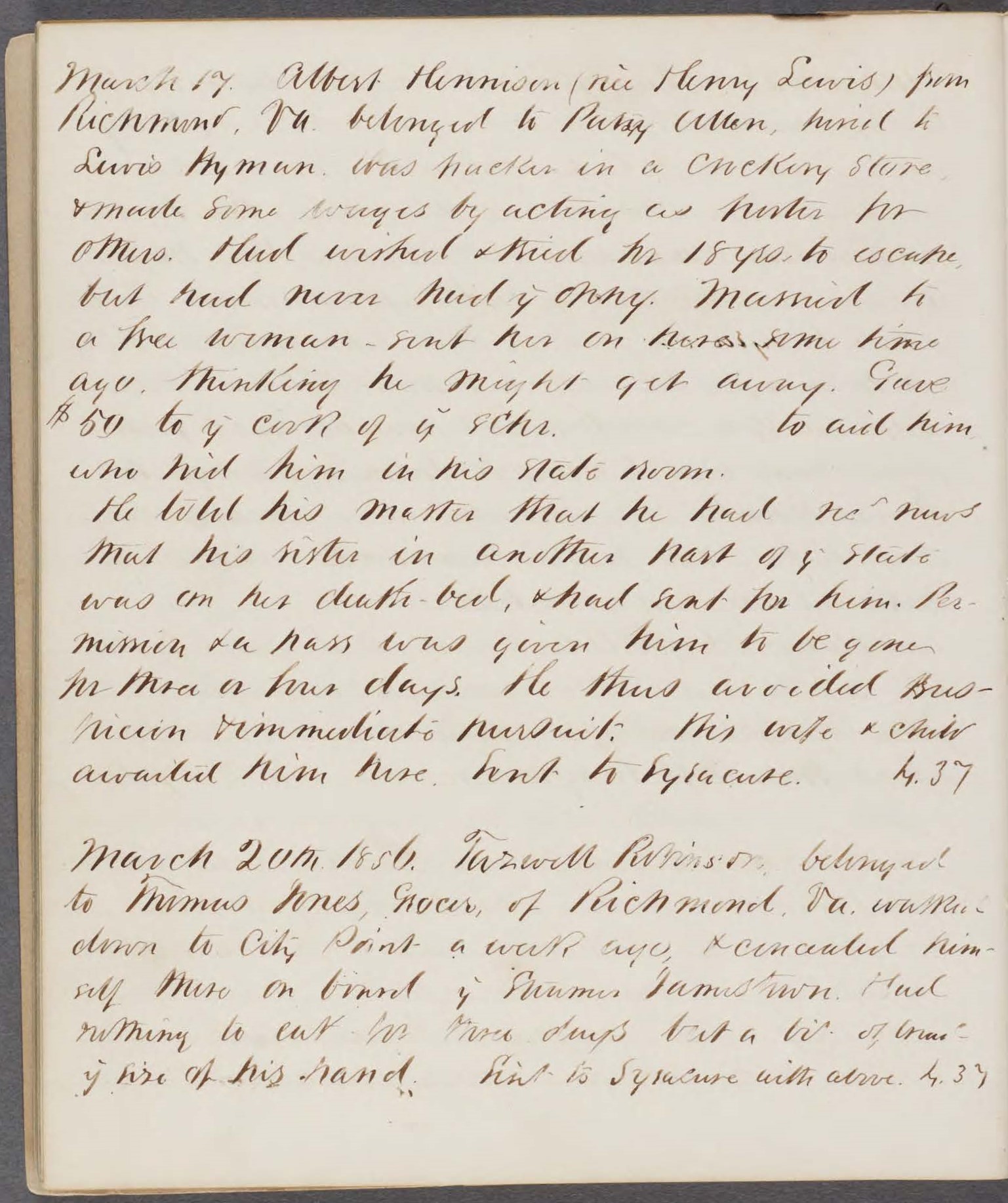 The information provided in Gay’s notebook aligns with newspaper records purporting that Tazewell escaped via a steamer. In order to board this watercraft, Tazewell would have traveled to City Point, which is actually in present day Hopewell, Virginia, well over fifteen miles from historic Shockoe Bottom. After arriving in New York City, Tazewell was sent to Syracuse, and from there, to Canada. Gay’s records also provide the occupation of Tazewell’s enslaver, Thomas Jones, and finally another gem, Tazewell’s surname: Robinson. These clues are helpful for tracing Tazewell’s life in Richmond before he pursued freedom. Stay tuned as I follow these leads in next month’s Virginia Untold blog post.

While Tazewell found freedom, Richard stared down a different fate. Richard was tried by the Hustings Court of the City of Richmond and found guilty. The court sentenced him to receive 10 lashes and to be sold to a new enslaver. In 1834, the Virginia General Assembly had passed a law that advising or persuading an enslaved person to abscond, or furnishing them with a pass, money, or provisions and found guilty would lead to imprisonment. A second offense, would lead to them being deemed a felon, and a third offense would result in thirty-nine lashes and banishment.2

If you read a previous month’s blog about Fanny, you may remember that if an enslaved individual was convicted of a crime and sentenced to be sold, their enslaver would receive compensation. This was documented in the Public Claims records. Unfortunately, neither Richard’s name nor the name of his enslaver, Robert C. Fox (who the newspaper mistakenly identifies as “P. Fox”), appear in these records. Richard likely remained in the Virginia Penitentiary until a purchaser, often someone working in human trafficking, agreed to transport him outside the Commonwealth to the deep South. By transporting individuals convicted of crimes hundreds of miles away, Virginia legislators hoped they would be prevented from committing another offense in Virginia.3 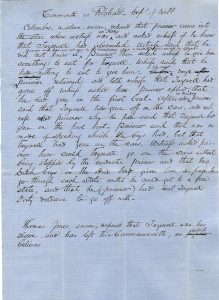 According to the Daily Dispatch, Richard was Tazewell’s uncle. I would like to think that Richard knew full well the consequences of his actions and chose to sacrifice the life he had in Richmond as an enslaved person, for the very slim possibility that he could help his nephew achieve a better quality of life as a free person in Canada. Richard’s legacy lives on in Tazewell’s freedom. As of this writing, I have not been able to determine Richard’s ultimate fate.

Be sure to check back next month for part 2.

Richard’s court case is part of the Richmond (City) Ended Causes, 1840-1860. These records are currently closed for processing, scanning, indexing, and transcription, a project made possible through a National Historical Publications and Records Commission (NHPRC) grant. NHPRC provides advice and recommendations for the National Archives grants program. An announcement will be made when these records are added to the Virginia Untold project.

View on the docks at Rocketts, Richmond, Va., April. United States Richmond Virginia, None. [Photographed 1865, printed between 1880 and 1889] Photograph.