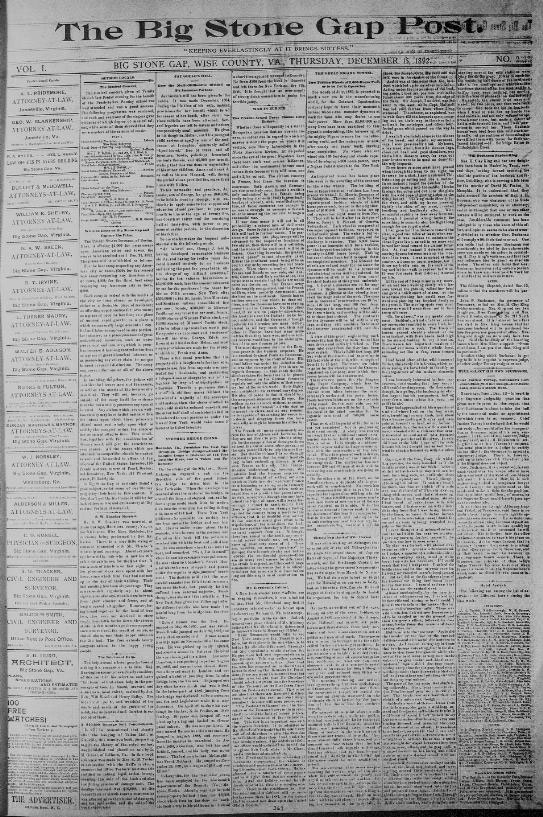 The setting for John Fox Jr.’s 1908 novel Trail of the Lonesome Pine, Big Stone Gap in Wise County is situated along the Powell River in a remote and rugged valley of the far southwestern region of Virginia. In the 1880s, the town (once known as Mineral City) had three farms, two small country stores, and a handful of mills. But the laying of several railroad lines into the Gap in the early 1890s–for the transport of coal and timber between Virginia, Kentucky, and Tennessee–transformed the isolated hamlet into a bustling gateway of industrial activity. As the region grew, eastern speculators promoted movement to and investment in the area.

In 1890, Colonel Charles E. Sears, first president of the Improvement Company, took over the Commercial Club and shortly thereafter established The Big Stone Post, a weekly newspaper. Colonel Sears unabashedly pitched the considerable advantages of Big Stone Gap, sending out prospectuses and placing advertisements in metropolitan newspapers throughout the East. One such prospectus, appearing in 1890 in Frank Leslie’s Illustrated Newspaper in New York City, described the Gap as a “wild and picturesque defile in Big Stone Mountain, an elongated spur forming a part of the Cumberland range of mountains just to the eastward of the Kentucky State Line.” The article also boasted of the town’s electric light plant, street railway, and waterworks.

In the first issue of The Big Stone Post, published on August 15, 1890, Sears explained that his purpose was “to advertise the material resources of the Appalachian district; [and] to show to the rest of the country that Big Stone Gap possesses paramount advantage over all other locations as a manufacturing and distributing point.”

The same issue reported on railroads, coke plants, and other internal improvements in the “Mineral Metropolis.” Sears went on to explain that although the Post would not be a political organ of any party its sympathies were “with the democracy” and that “discussions of public questions will be marked with conservatism and candor.” Sears remained an unapologetic and tireless promoter of the region and once exclaimed in the Post‘s columns, “Big Stone Gap. Seat of Empire! Such will it be unless an earthquake swallows it.” In addition to focusing on issues of economic development, the paper also covered typical items of local, national, international, and cultural news.

In December 1892, under the new ownership of C. M. Harris, The Big Stone Post became The Big Stone Gap Post. In his introductory editorial, Harris explained that he intended to maintain the high standards of his predecessor. “The reputation and character of a newspaper is not built on promises,” he wrote, “but its standing and position in the journalistic world is gained by the energy and ability that is behind it.” The paper continued to focus on local issues, such as the state debt question, while also covering national and international news. The Big Stone Gap Post retained a conservative editorial stance. By 1900, its circulation was approximately 800, in a community of 9,345. It faced little competition (except for a short-lived Republican newspaper, the Southwest Journal). In 1928, The Big Stone Gap Post shortened its title to become, simply, the Post, which is still published today.

To search digitized issues of The Big Stone Post from 1890-1892 visit Chronicling America. In addition, microfilmed and original issues are available at the Library of Virginia. 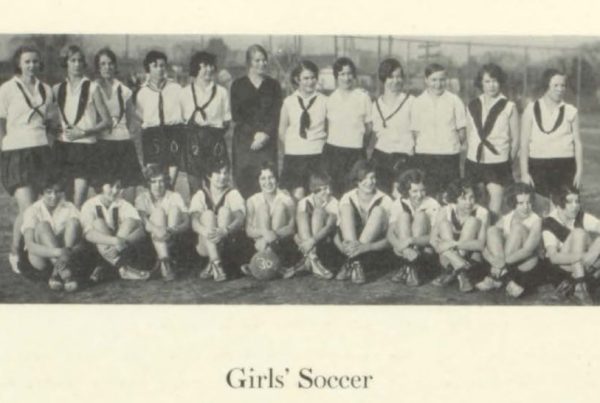