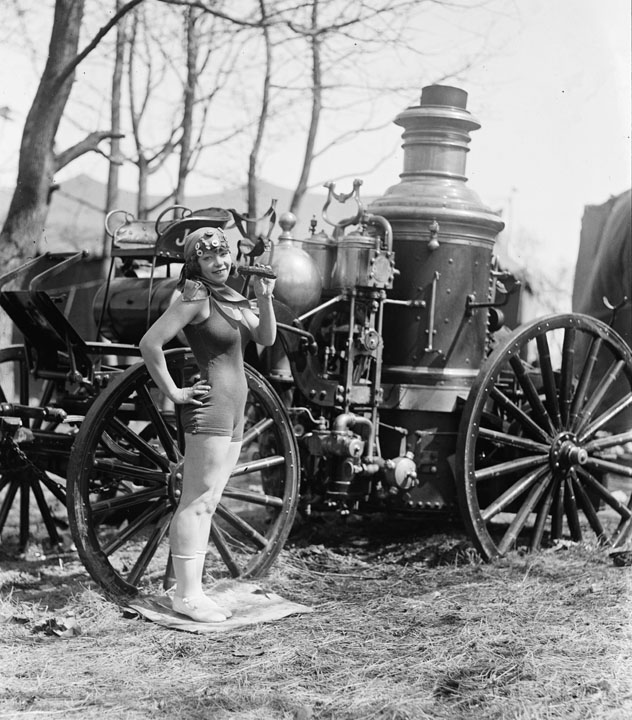 The chancery causes we encounter usually involve disputes over lands, estates, and businesses, but occasionally we stumble upon cases that can only be categorized as bizarre. One such oddity found in the chancery collections is a dispute over the winner of a contest held during Harrisonburg’s Fourth of July celebration in 1893. There are many traditions involved in marking the independence of the United States – hot dogs, baseball, parades, and, of course, fireworks. The Harrisonburg celebration included among those traditions a hose contest participated in by local fire companies.  However, the outcome of this particular Fourth of July diversion was not  resolved until two years later in the Rockingham County chancery court when Hose Company No. 4 brought suit against Hose Company No. 1, Hose Company No. 2, and the Harrisonburg Guards, who hosted the event (Rockingham County Chancery Cause 1895-043).

For the hose contest, squads of fifteen men from each of the companies were to start from a given point, run a distance of 100 yards with their hose carts on which was to be reeled 200 feet of hose, unreel and disconnect 150 feet of hose, fix a nozzle upon one end of the hose, connect the other end with a fire plug, and “throw water.” A prize of $30.00 was to be given to the company whose squad accomplished the test in the shortest amount of time. Hose Company No. 4 completed the contest with the fastest time but was found to have used, instead of an ordinary iron spanner (a device used to separate sections of the hose), a device of their own contrivance of an “original and peculiar character” – eel skin. The contest judges decided that the squad had not complied with the “spirit of the contest” by using a device that allowed for a quicker disconnection of the fire hoses and demanded that Hose Company No. 4 participate in another trial with standard equipment before being awarded their prize money. When Hose Company No. 4 failed to comply, the judges crowned the second place finisher Hose Company No. 2 as the rightful winners.

Dissatisfied with the outcome, Hose Company No. 4 headed to court seeking an injunction to halt payment of the prize money. Company No. 4 claimed that the rules of the contest did not specify that they must use the “more ancient and usual iron spanner” and argued that the conditions of the contest could not be fairly replicated in a new trial. The injunction was awarded but would not be put into effect until Hose Company No. 4 paid over $75.00 to the Commonwealth of Virginia. Sadly, the court documentation ends there so we will never know if Hose Company No. 4 was able to claim title as the fastest hose winders and water throwers in Rockingham County, but it is doubtful that the squad would be willing to pay out $75.00 in legal fees to get their hands on prize money that was meager by comparison.

Hose Company No. 4 is still in operation today as a full-service volunteer fire department and first response emergency medical services agency serving the Rockingham County area. The Rockingham County chancery collection is currently closed for processing to prepare it for digital reformatting. If the budget allows, the digitization project will begin in the fall.