The Short Happy Life of The Chickahominy Sun

The above title stands as a slight upgrade, it is hoped, to the first headline of this small town weekly’s blog  introduction, the simply descriptive-Now On Microfilm, The Chickahominy Sun.  The Sun’s three year plus nine month duration is certainly not as short as many other newspapers nor is it possible to accurately attest to its comparable happiness.  Yet sometimes, even a minor coincidence cannot be resisted.  The Sun shares a year of origin, 1938, with the hardback publication of Hemingway’s short story “The Short Happy Life of Francis Macomber”.  So there you are.  Let’s add one more word of description which could be applied to Macomber’s last moments (at least from his perspective) and to The Sun-perplexing.  Perplexing, that is, to imagine how an eight page, six column paper found itself a home in Providence Forge.  For in the time consumed reading  to this point, a driver (at 45 mph, assuming a green light at the intersection of route 60 and state road 155) might have successfully traversed the town and turned back to relive it all over again.

Before reproducing the front page of the first issue, let’s take a closer look (necessary since the scale is so curiously small) at the unusual design work beneath the arched Chickahominy in the masthead.

Is this the sun?  One supposes.   As perhaps referenced via ancient Egypt and the eye of Horus? One supposes with a little less confidence.  Turning to firmer ground, the paper takes its name not from the town but the Chickahominy River that acts as border to the two counties of principal coverage, New Kent and Charles City.  The river is unidentified in this charmingly peculiar depiction but the residents know their own river and besides there’s barely room so we’ll skip it-perhaps that was the thinking.  To the northeast another river is named, the York, which appears at the convergence of the Pamunkey and the Mattaponi; the first seen looping about from the north and the second not visible or, you could say, out of eyeshot.   Here is located West Point and the region’s long established paper, The Tidewater Review, birthing agent of The Sun.  Under the title, Newspaper Is Started For Two Counties , Review Now Has Branch Office , The Sun  is described as “born in what is felt to be an auspicious spirit, which will work toward the development of this part of Virginia”.

Below is a debut front page whose layout quickly indicates the two subjects of their attention. 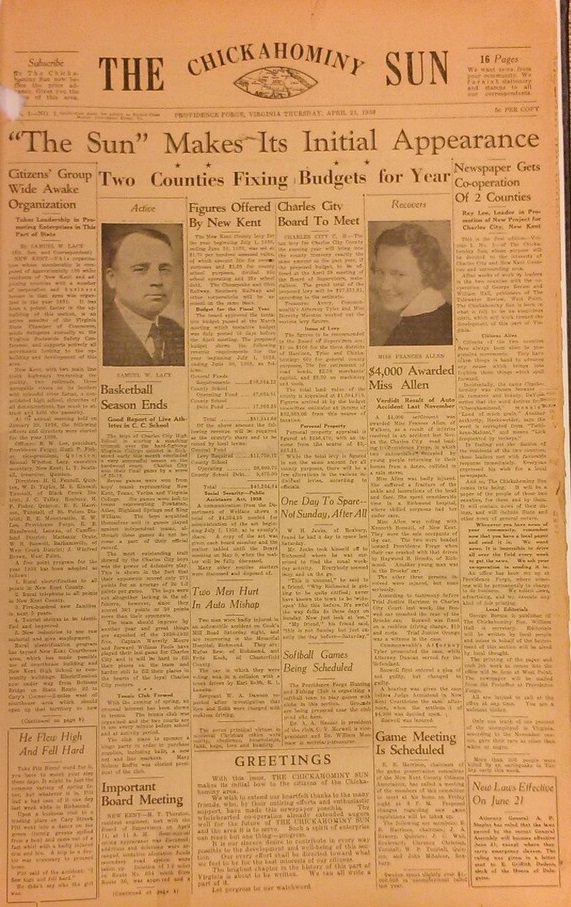 Our new film holding continues for the remaining 192 issues adding up to a virtually complete run (missing one page and one date) of The Sun’s brief history.  This was only possible due to the preservationist instincts of The Tidewater Review’s current editor, Robin Lawson, who provided us with bound editions in near perfect condition.  Ms. Lawson generously loaned us as well copies of The Review and its predecessor, The West Point News.  Completion of that filming (from earlier in the century, hence more fragile, requiring restoration) will be discussed in a future entry in Fit To Print.

The Sun’s final issue occurs in January of 1942, about a month after Pearl Harbor, when the country moves into the unknown territory of an uncertain war economy.  This in combination with an already stalled advertising base gave the West Point managers doubts strong enough to curtail their expansionary venture.  One consistently loyal advertising client deserves special mention-Hollywood and its branch offices, the local theaters.  Absent a screen of their own (even today there’s not an incorporated town in either county), the fantasy life of readers was under steady siege from two fronts:  West Point and Williamsburg (and for a few weeks even a third from a theater east of Richmond, that concentrated smudge you can sort of discern on the map).

Since The Sun’s budget apparently didn’t allow for a staff photographer (not one self-generated photo   that I can discover) Hollywood publicity shows up even off the amusement page.  Groucho Marx or Bette Davis or Jimmy Stewart might loom over the Charles City High School notes.  The number of films in release always startles despite the frequent experience of inventorying papers of this publication period.  If you can identify as familiar more than one or two of the above, you’re doing better than anyone in the Project.

And now here’s the announcement of the newspaper’s demise, or their preference, its reabsorption back into The Tidewater Review.

When matters did “return to normal”, The Sun didn’t.  New Kent and Charles City would not re-experience such press/reader intimacy again.

Hoping to avoid a discordant note at the top, the salutation below has been postponed to the bottom.  Just as The Sun published a farewell note, they also published an introductory greeting.   It’s there beneath the fold on the front page reproduced earlier.    Here’s a closer look at one of the Project’s favorite typographical errors.  Not especially for the goof itself, but the timing and placement:  volume 1, issue 1.  Funny thing about watchwords- you have to watch them. 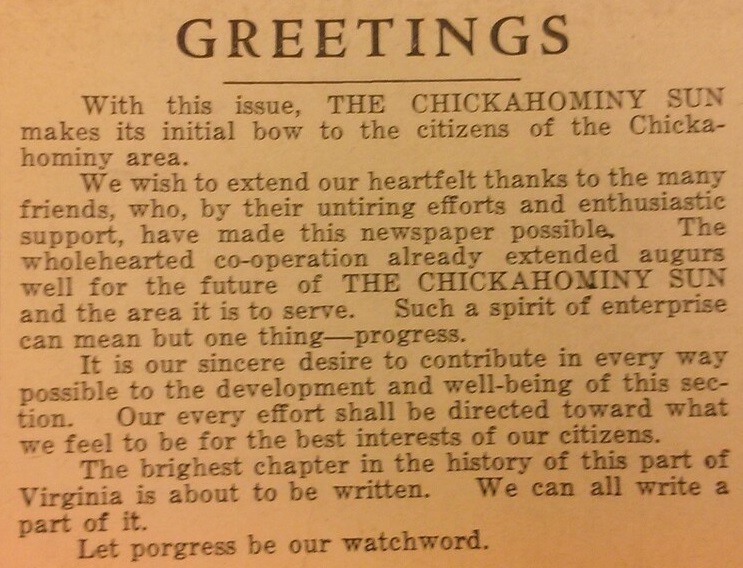 A moment, I prefer to think, for not deep chagrin by the editor, but a medium to light-hearted sigh of resignation, and then on to issue number 2.