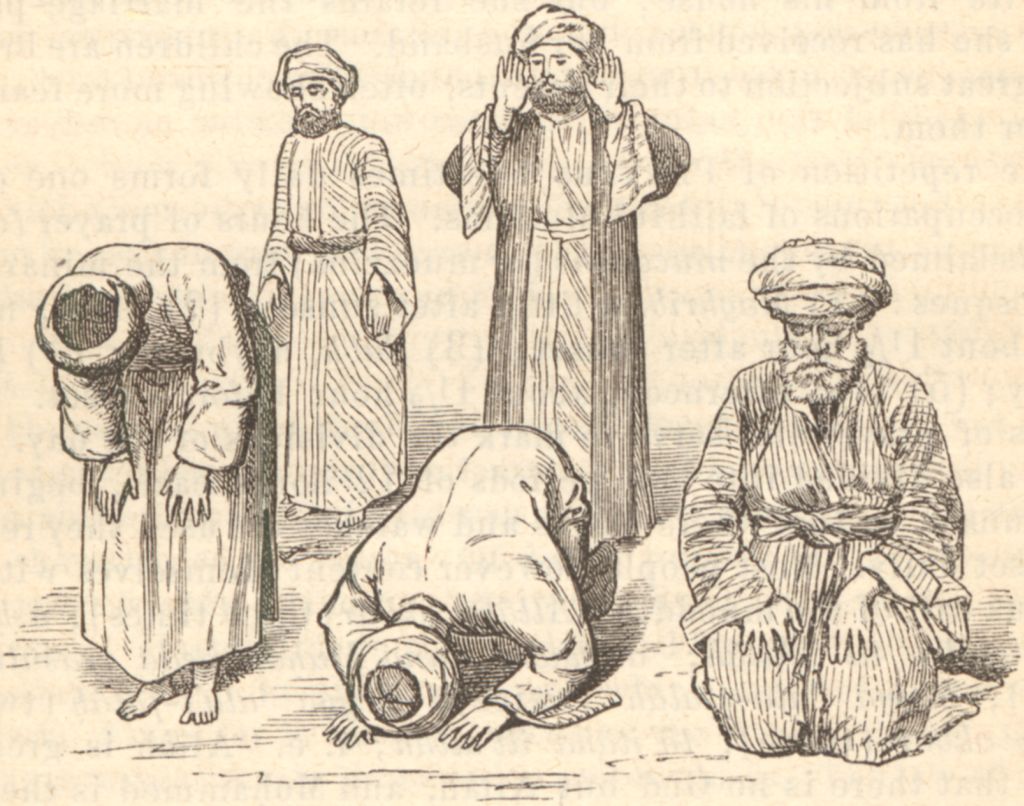 Religious liberty is a hot button issue during this year’s presidential campaign. Should a religious test be applied for the purpose of denying Muslims entrance to our country? Can an elected government official deny a marriage license to a couple because their lifestyle is contrary to the official’s religious beliefs? The debate concerning religious liberty is hardly new. It goes back to America’s colonial period. And just like today, there were passionate voices on both sides of the debate.

During the colonial era, only one religious denomination was recognized by the British government– the Church of England, also known as the Anglican Church. There were other denominations in Virginia, including Baptists, Presbyterians, Quakers, and Mennonites, but the British government and the Anglican Church labelled them collectively as Dissenters. As a result of this differentiation, the followers of Dissenter churches, as well as Roman Catholics, did not enjoy the same civil and religious rights 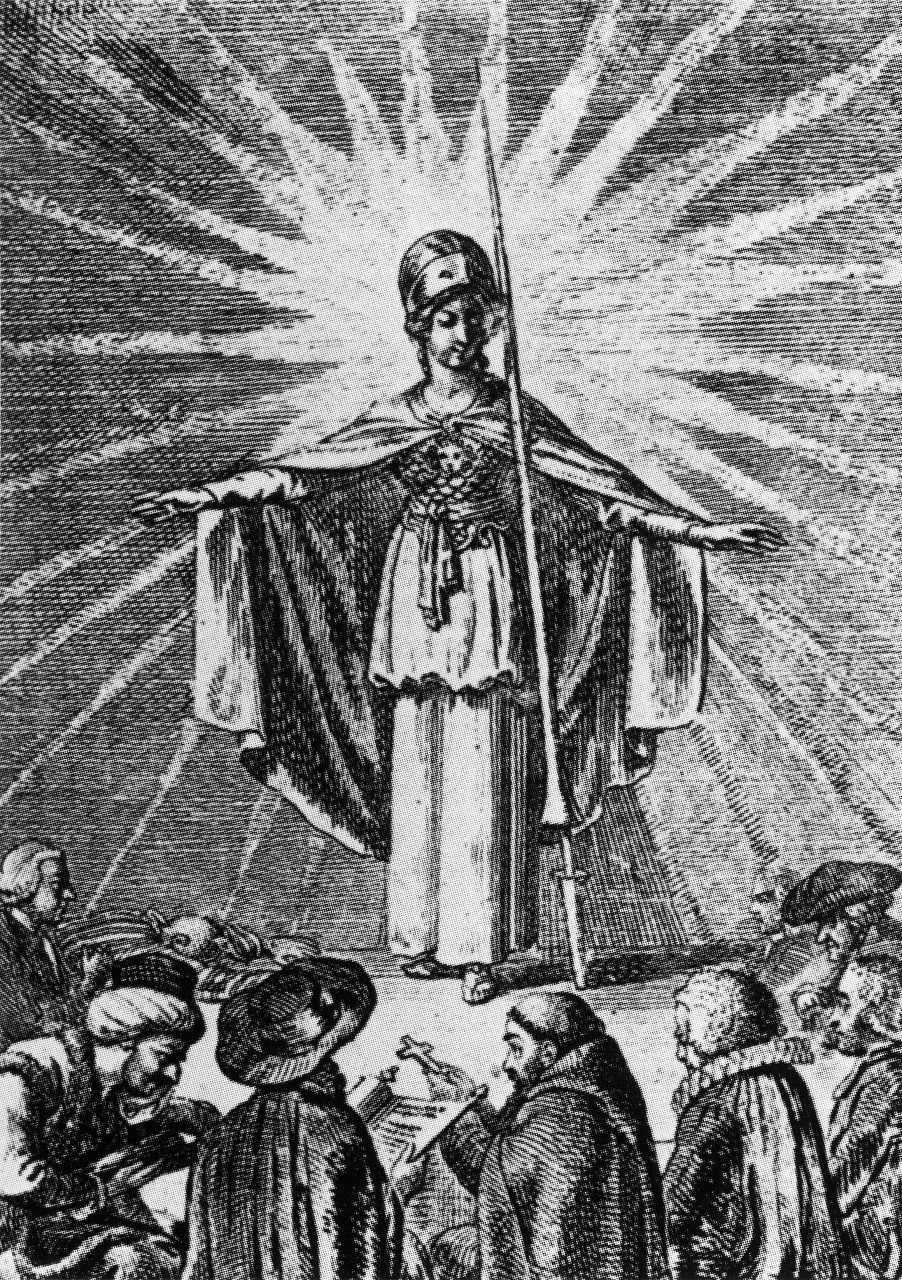 as Anglicans. Marriages performed by Baptist or Mennonite clergy were not recognized as legitimate by the Anglican Church. A religious test was used for the express purpose of denying Roman Catholics the right to hold public office. And everyone in Virginia, to the chagrin of Dissenters and Catholics, had to pay a tax to support the Anglican Church.

Growing sentiment for political independence from Great Britain also promoted the pursuit of religious independence. In Virginia, political leaders such as George Mason and Thomas Jefferson, inspired by the Enlightenment-born principles of reason, tolerance, progress, and liberty, believed that religious freedom was a natural right. A few weeks before the Declaration of Independence was approved in Philadelphia in 1776, the Fifth Virginia Convention at Williamsburg unanimously adopted the Declaration of Rights drafted by Mason. The last article in the document promoted unshackled religious liberty, saying that “all men are equally entitled to the free exercise of religion, according to the dictates of conscience.” This article was not met with universal acclaim in Virginia. Citizens throughout the Commonwealth expressed their opinions in subsequent petitions and memorials to the General Assembly.

There were some Virginians who favored religious liberty for all: Dissenters, Anglicans, Deists, Roman Catholics, Jews, and Muslims:“… let Jews, Mehometans [Muslims], and Christians of every Denomination injoy [sic] religious liberty, as the decliration [sic]  of rights has invited them … thrust them not out now by establishing the Christian religion lest thereby we become our own enemys [sic] and weaken this infant state. It is by men’s labour in our Manufacturies their services by sea and land that Aggrandize our country, and not their creeds. … let Jews, Mehometans, and Christians of every Denomination find their advantage in living under your [the State’s] laws. Religion is of God to man. The civil law is of you to your people.” (Petition of the inhabitants of the county of Chesterfield, 1785) “In this enlightenment age, and in a land where all of every denomination are united in the most strenuous efforts to be free; we hope and expect that our Representatives will chearfully [sic] concur in removing every species of religion, as well as civil bondage. Certain it is, that every argument for civil liberty gains additional strength when applied to liberty in the concerns of Religion; and there is no argument in favour of establishing the Christian Religion” [because that would be on par with] “establishing the Tenets of Mahomed by those who believe the Alchorein [Koran].” (Memorial of the Presbytery of Hanover, 1776) 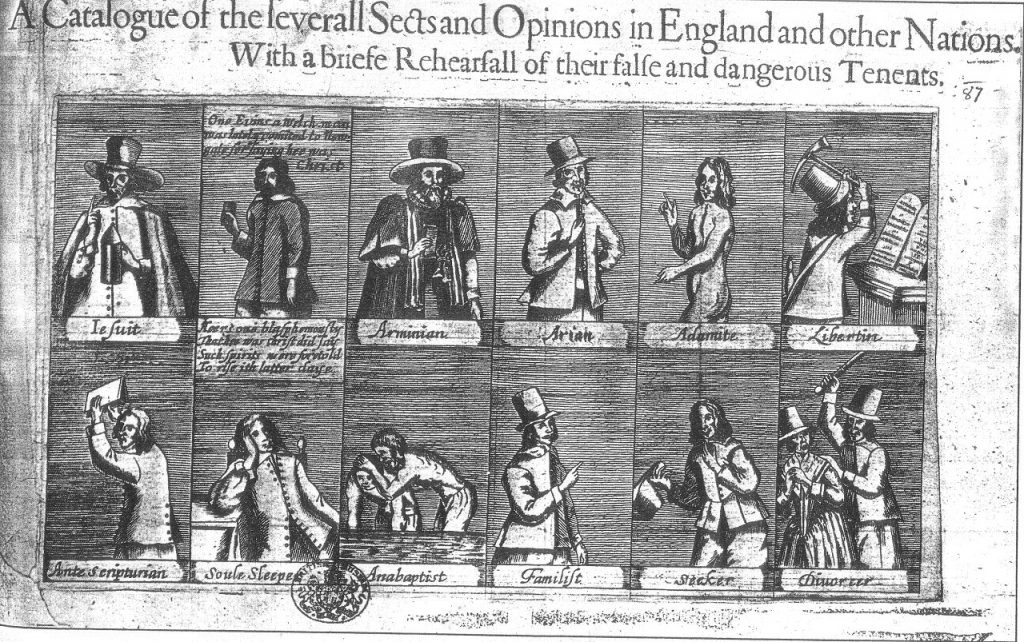 Unknown. A Catalouge of the Severall Sects and Opinions in England and other Nations: With a briefe Rehearsall of their false and dangerous Tenents. Broadsheet, 1647. British Museum. 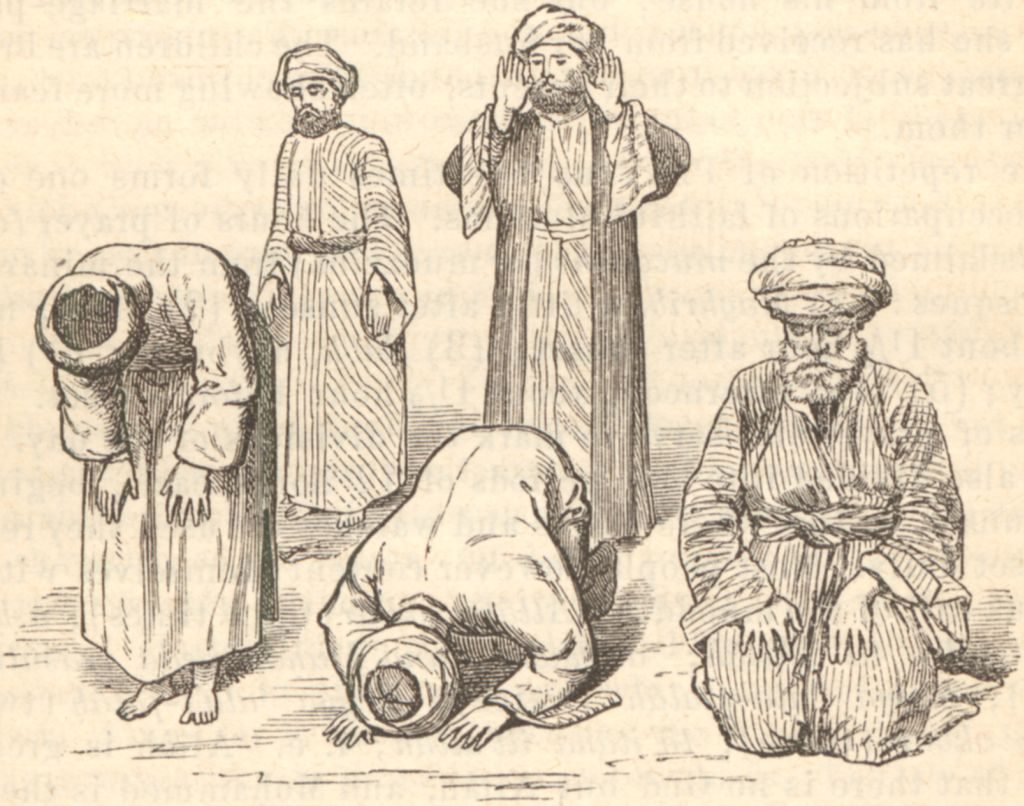 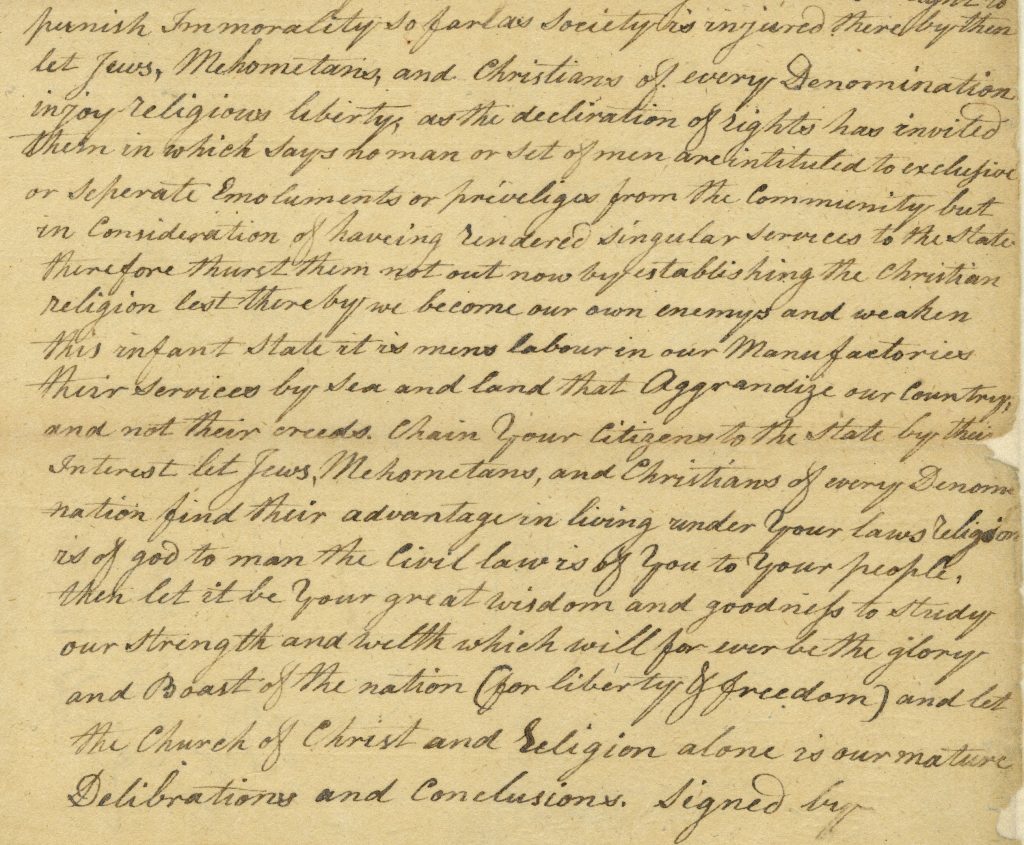 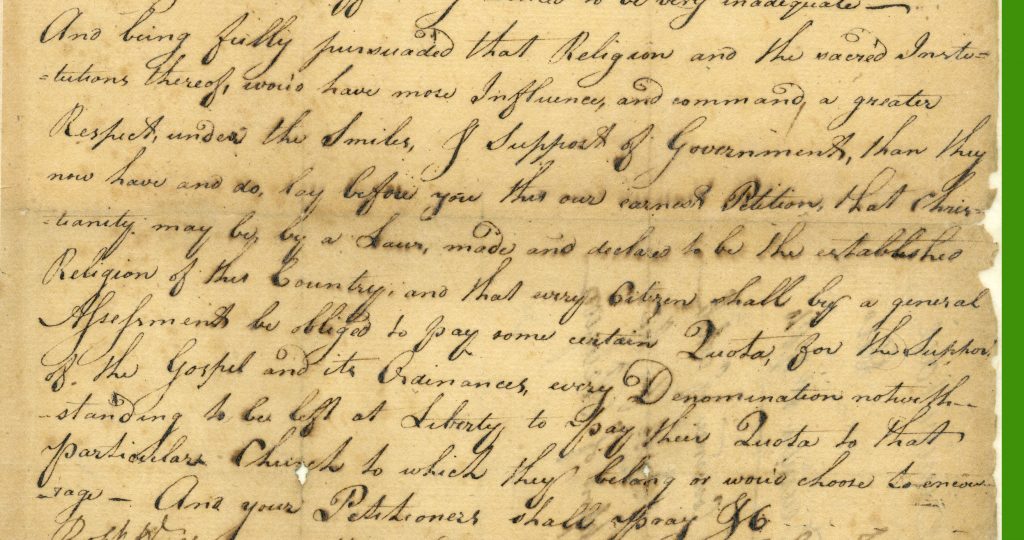 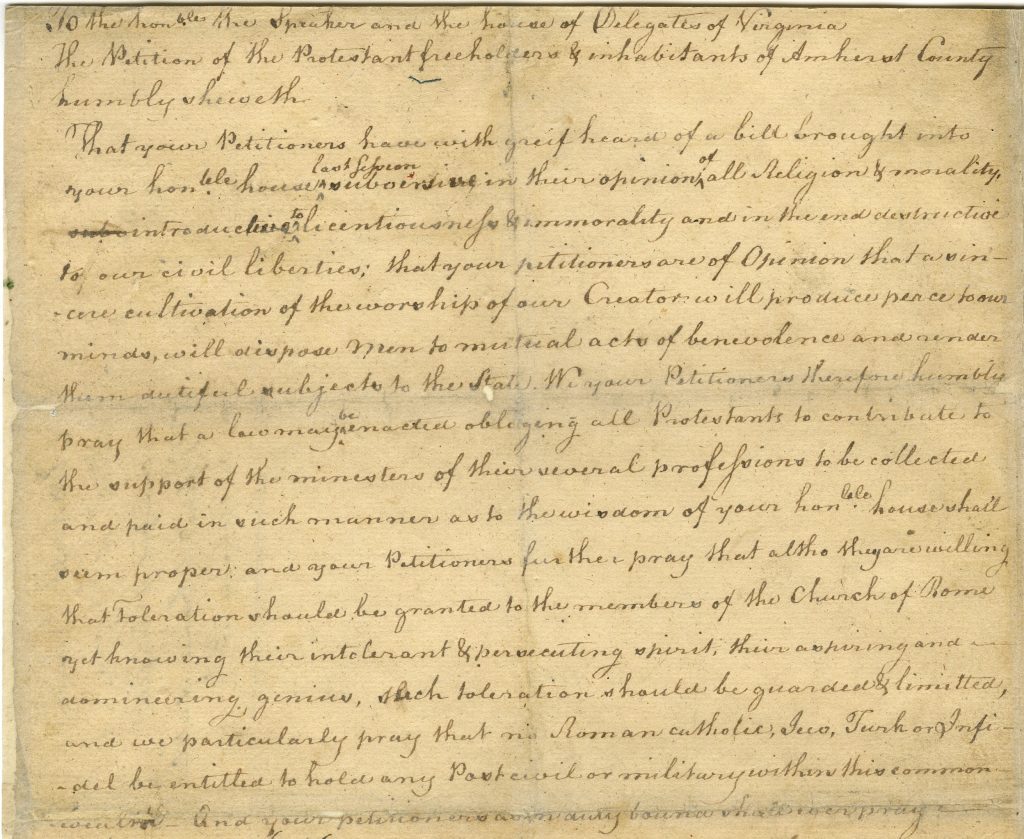 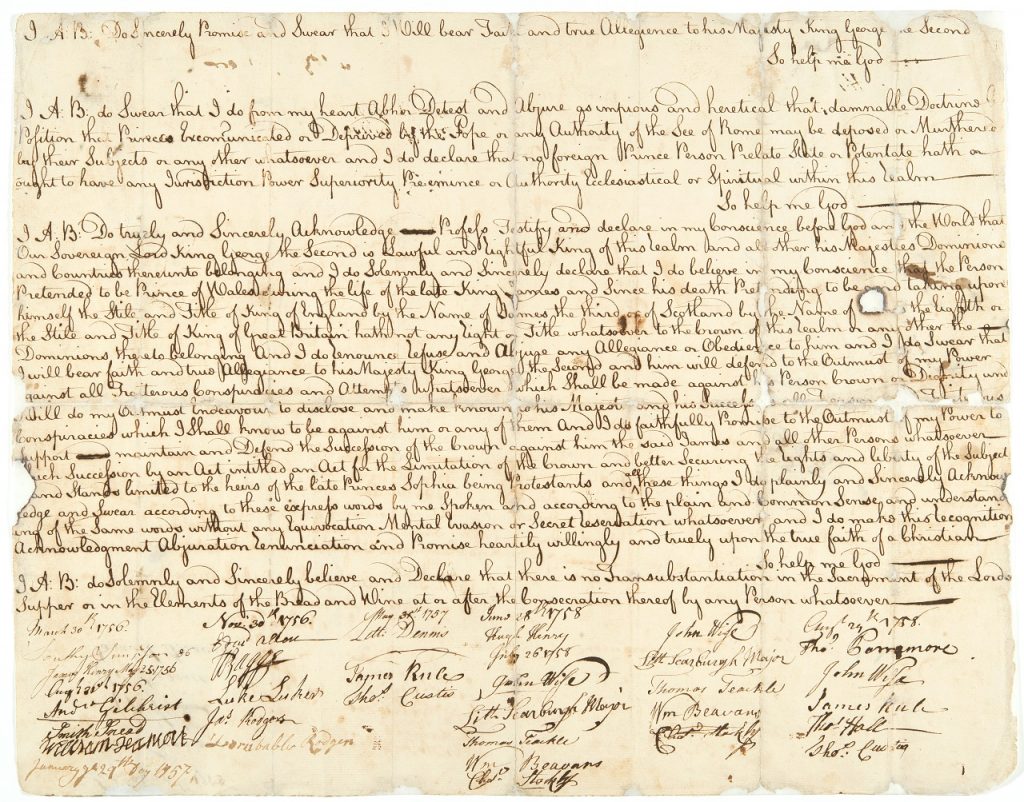 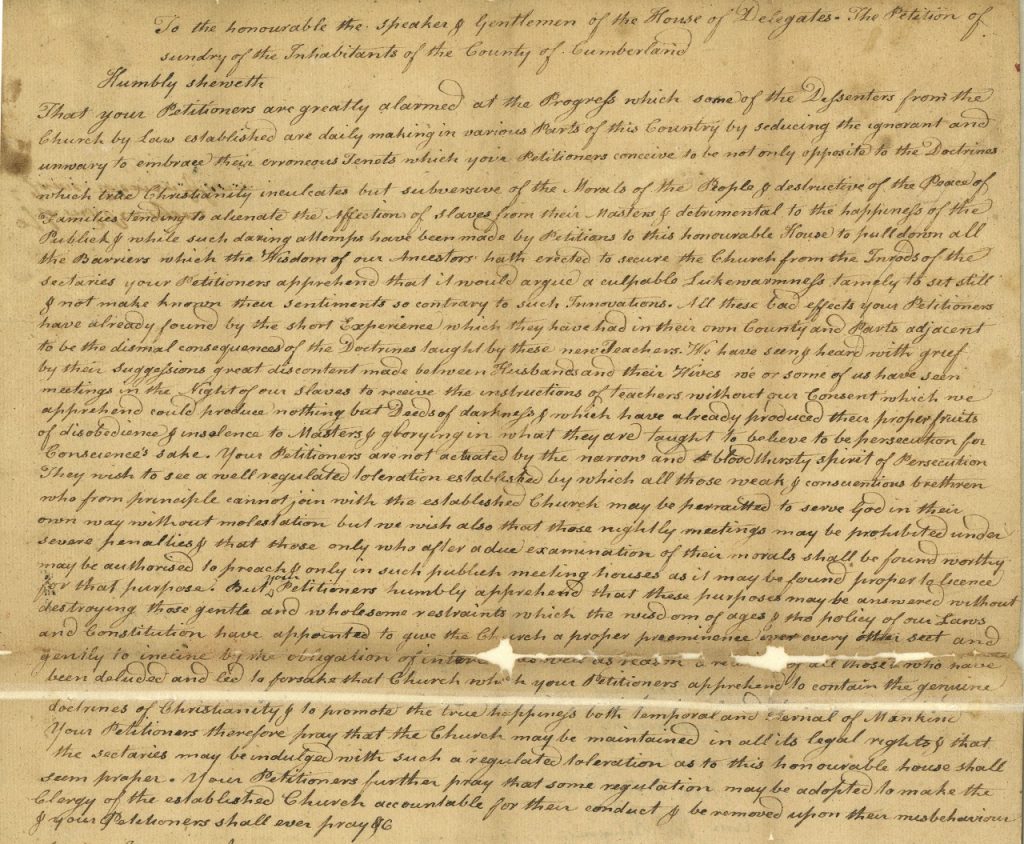 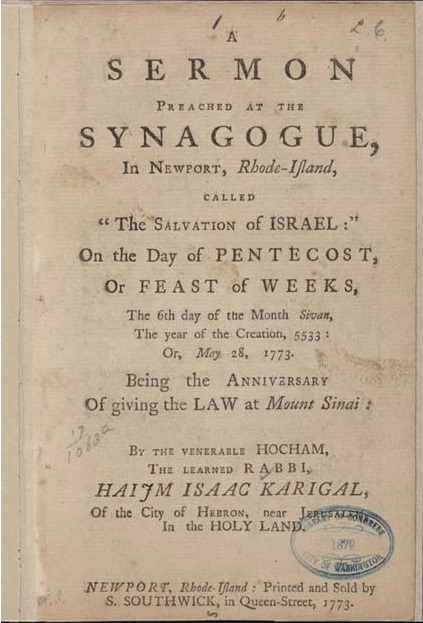 Haim Isaac Kargial, A Sermon Prearched at the Synagogue, in Newport, Rhode Island, Called ' The Salvation of Israel..."

Many Virginians feared unfettered religious liberty. Does this mean non-Christians would enjoy the same religious rights as Christians? Would it mean that Muslims and Jews would be able to teach their creeds? Would they be allowed to worship openly? Citizens from Dinwiddie County petitioned the General Assembly to pass a law limiting religious liberty to Christians. “And being fully persuaded that Religion and the sacred Institutions thereof, will have more Influence, and command a greater Respect under the Smiles & Support of Government than they now have and do lay before you this our Petition that Christianity may be, by Law, made and to be the established Religion of this Country.” (Petition of the petitioners of Dinwiddie County, 1784)

Other Virginians were concerned that unlimited religious liberty would lead to expanded civil rights. Could a Roman Catholic be a justice of the peace? Could a Muslim serve as an officer in the militia? A group of citizens from Amherst County who identified themselves as “Protestant freeholders and inhabitants” petitioned the General Assembly against such a possibility. “[W]e particularly pray that no Roman Catholic, Jew, Turk [Muslim], or Infidel be entitled to hold any post, civil or military, within this commonwealth.” (Petition of Protestant freeholders and inhabitants of Amherst County, 1779). Citizens in Essex County echoed the sentiments of those in Amherst County, requesting that “[N]o person not being Protestant nor professing the Christian religion, and living in conformity to the same, be permited [sic] to hold or exercise any civil authority within this State.” (Petition of sundry Inhabitants of the County of Essex, 1779)

There were also Virginians who wanted to continue to deny full religious liberty to Dissenters. They accused Dissenters of “seducing the ignorant and unwary to embrace their erroneous Tenets which your petitioners conceive to be not only opposite to the Doctrines which true Christianity inculcates but subversive of the Morals of the People & destructive of the Power of Families tending to alienate the Affection of slaves from their Masters & detrimental to the happiness of the Publick [sic].”  The petitioners went on to say that they had “seen & heard with grief by their [the Dissenters’] suggestions great discontent made between Husband and their Wives. We or some of us have seen meetings in the Night of our slaves to receive the instructions of teachers without our consent which we apprehend could produce nothing but Deeds of darkness & which have already produced their proper fruits of disobedience & insolence to Masters & glorifying in what they are taught to believe to be persecution for conscience’s sake.” (Petition of sundry of the Inhabitants of the County of Cumberland, 1778). To put it simply, the Dissenters were a threat to the social order and needed to be reined in. The petitioners did not necessarily want to abolish Dissenter churches, but they wanted those churches to be regulated by a state church which would control the content of their teachings and determine meeting times and places.

After years of debate over the extent of religious liberty following the approval of the Declaration of Rights, in 1786 the General Assembly passed the Statute of Religious Freedom drafted by Thomas Jefferson in 1777. It affirmed the religious liberty article found in Mason’s Declaration of Rights. There would be no “established” church supported by the government. Further, Christianity would not be the established religion. Dissenter churches were free to worship and teach without restrictions. Finally, no religious test could be applied to holding public or military office. What the Statute of Religious Freedom did not do was to bring an end to the religious liberty debate. The rhetoric coming out of the current presidential election campaign is a testament to that fact.

To learn more about the debate among Virginians over religious freedom, you can search the Legislative Petition Digital Collection available at Virginia Memory. To learn more about the legacy of religious liberty in Virginia, come to the Library of Virginia and visit the upcoming exhibit “First Freedom: Virginia’s Statute for Religious Freedom,” which will be open April 18, 2016–March 2, 2017.