Portraits of a Prophet: 100 Years of Nat Turner in Print

CONTENT WARNING: Materials in the Library of Virginia’s collections contain historical terms, phrases, and images that are offensive to modern readers. These include demeaning and dehumanizing references to race, ethnicity, and nationality; enslaved or free status; physical and mental ability; religion; sex; and sexual orientation and gender identity.

“I have a horrible and heart-rending tale to relate,” read a letter from the editor of the Norfolk Herald and printed in the Sept.3, 1831 issue of the Genius of Liberty, “and lest even its worst features might be distorted by rumor and exaggeration, I have thought it proper to give you all and the worst information that has reached us through the best sources of intelligence which the nature of the case will admit.”

The “horrible and heart-rending tale” the letter described was a violent slave rebellion which had taken place about sixty miles west of Norfolk in Southampton County, Virginia. “A fanatic preacher by the name of Nat Turner (Gen. Nat Turner),” reported the Richmond Enquirer, “was at the bottom of this infernal brigandage. (Aug. 30, 1831)”

By the time the revolt was over, sixty men, women and children had been killed. But as Scot French’s book, The Rebellious Slave: Nat Turner in American Memory, explains, “First the white people fell. . . Then the black people fell.” The Richmond Constitutional Whig of Sept. 3, 1831 reported that many slaves were slaughtered by retaliating mobs “without trial and under circumstances of great barbarity.” The death toll among the enslaved, many of whom played no part in the revolt, was in the hundreds. 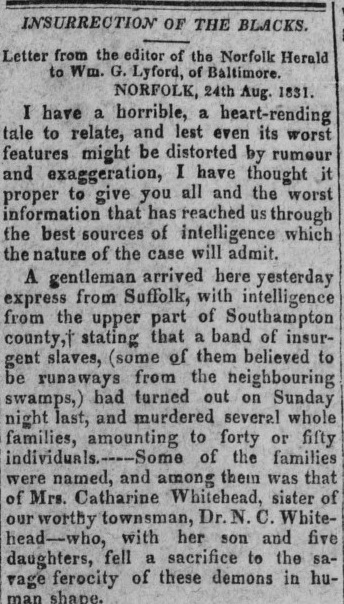 Rather than describe the events of “Nat’s War”, the Newspaper Project hopes to show how newspapers talked about Nat Turner and how they variously portrayed him in the decades following his life and death.  With a myriad of descriptions over the years, from “distinguished immortal spirit” to “wild fanatical,” Turner’s legacy was appropriated by different groups to both frighten and inspire.

“We regretted to see that, in the Association of the Shiloh district of colored Baptists. . .the horrid massacre set on foot by NAT. TURNER in Southampton in 1830 was alluded to with much éclat and parade.  The delegates from that county were referred to as coming from the county ‘where NAT. TURNER struck the first blow for freedom’. . .Now this was all very bad and very much out of place. NAT. TURNER’S massacre was the most barbarous and brutal of all the human butcheries of this century.” The article went on to say, “’First blow for freedom,’ indeed! It was the deadliest blow to kind feeling for the blacks and to the growing sentiment in favor of abolition which could have been inflicted.”

The piece, published two years after the Civil War, clearly demonstrated how perceptions of Turner were racially divided—freedom fighter on one hand, and brutal murderer on the other. It is a divide that continues, even today, when people discuss events surrounding Turner.

To better understand the differing interpretations of Nat Turner in the collective memory, it helps to look at newspapers published later in the nineteenth century after a vibrant and widespread African American press took hold in America.  Newspapers, whose audiences were divided along racial lines from the late nineteenth century well into the twentieth, often gave disparate descriptions of the same person or event, and Turner and his rebellion were no exception.

An 1892 article from the Appeal, a black newspaper published out of St. Paul, Minnesota, called Turner a great man who sought to “right the wrongs done to his race. . .he wanted to be free and he undertook to fight his way out but got lost in the shuffle.”  Though some in the African American community condemned violence as a means to an end, others thought it necessary to end the evil of slavery. A 1931 piece written on Southampton’s history for the Highland Recorder, on the other hand, described the events Turner inspired very differently: “It was not the Revolution, or the War of 1812, or yet the stressful period of the War between the States that wrought scenes of horror in Southampton. . .This work of carnage was to be that of Nat Turner, a wild, fanatical colored preacher and his confederates.”

Below are a few examples, among many, of articles with sharply contrasting views of Turner. The first four are taken from African American newspapers, while the latter four are from (for lack of better description) mainstream weeklies and dailies: 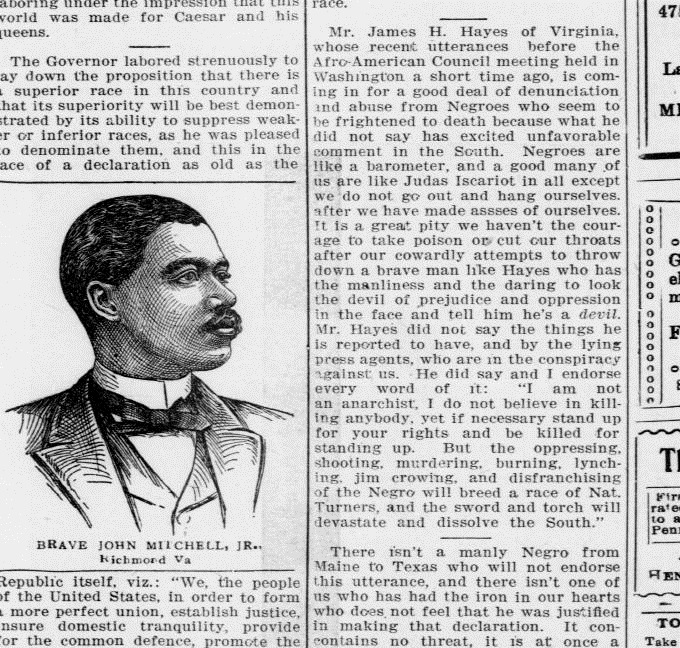 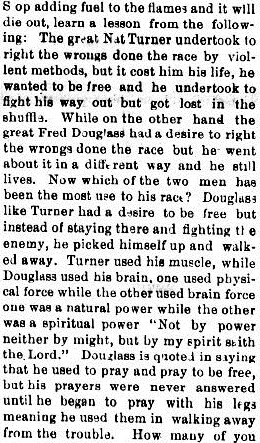 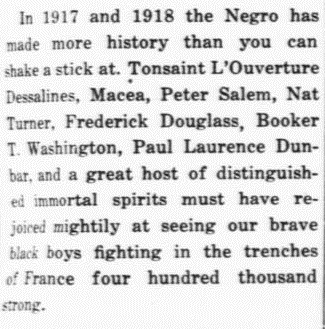 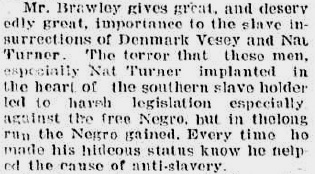 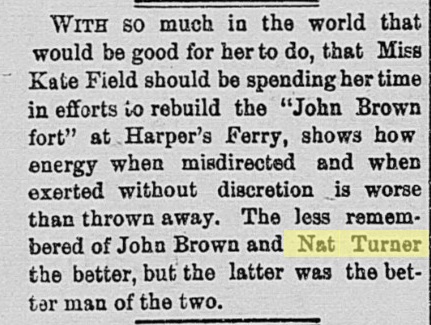 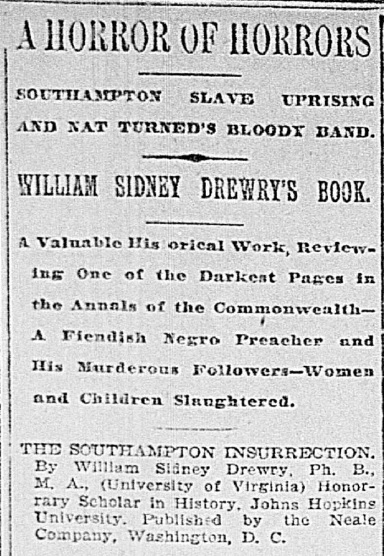 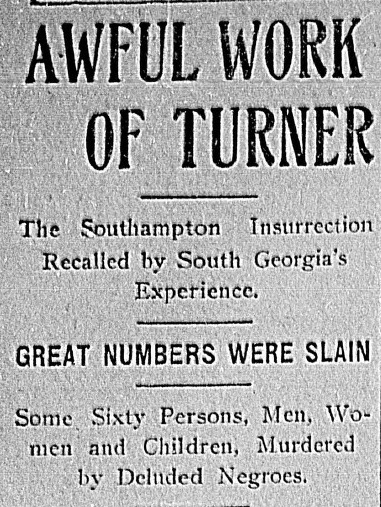 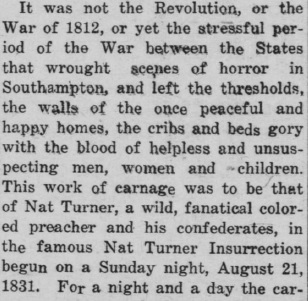 Interestingly, Nat Turner’s role as a preacher also helped shape opposing portraits of him. “Nat Turner,” an Oct. 9, 1889 article from the Alexandria Gazette explained, “the negro insurrectionist, who murdered so many people in Southampton county. . .was a negro preacher who found warrant in his bible for all his inhuman monstrosity, slaughtering as he did the aged and infirm and babies in the cradle.”  But a 1909 article from the Montana Plaindealer, an African American newspaper published in Helena, Montana, offered a poetic and heroic vision of the slave preacher: ”And so Nat Turner, Denmark [Vesey] and other of that type were but the product of these preachments and the light they saw was a reflected illumination radiating from the fires that burned on the [altar] of the Negro Church. . .The Negroes who fled the swamps and withstood masters. . .were all influenced  to this effort through the preachment of these crude, unlettered men who had faith in God.” 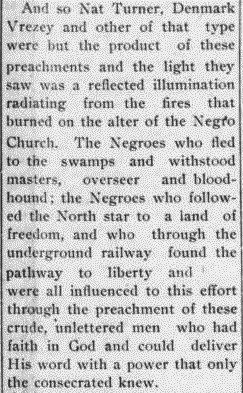 After the Civil War, southern newspapers often invoked Turner’s name with that of John Brown’s, another controversial figure portrayed as both martyr and madman. In newspapers geared toward a white audience, the two men were often written about with intense vitriol, while black newspaper publishers placed Brown alongside Turner, Frederick Douglas and Denmark Vesey as a hero among heroes unafraid to die for the causes of freedom and justice: 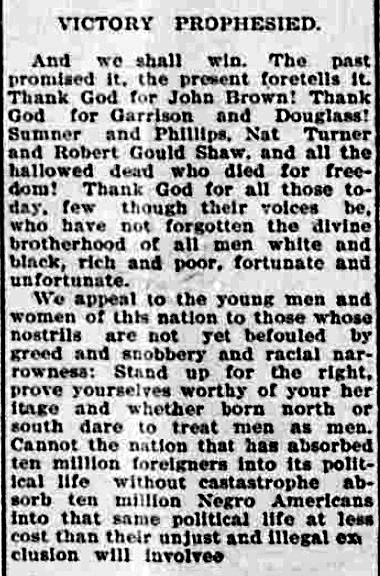 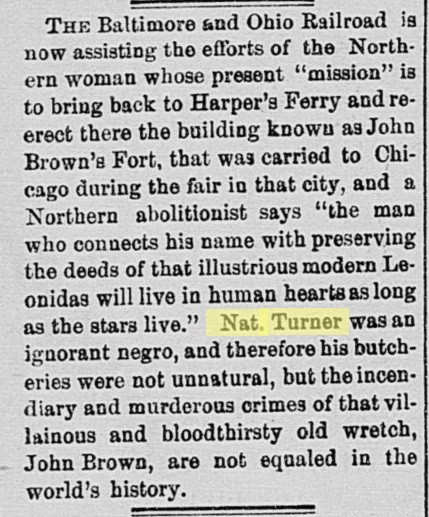 Nat Turner’s Rebellion, when discussed, continues to fascinate and still provokes varying reactions nearly two hundred years after the fact. While newspaper accounts differ in their depictions of him, it is without a doubt that the events he helped set in motion on the night of August 21, 1831 left a lasting impression on the nation’s history.

To find newspaper references on Turner, Virginia Chronicle and Chronicling America are invaluable resources. Make sure to check out yesterday’s blog as well, which describes “Nat’s War” and highlights the Library of Virginia’s rich collection of primary resources related to him, many of which can be found on Transcribe. Another helpful resource is Scot French’s The Rebellious Slave: Nat Turner in American Memory, an excellent and detailed work on Turner in the collective memory.