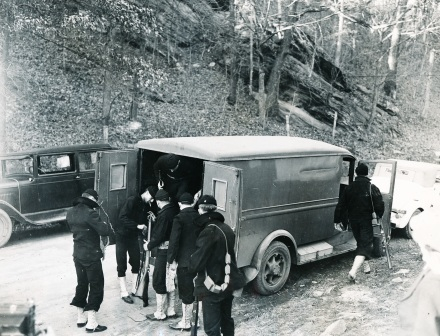 Today marks the hundredth anniversary of the first day of Virginia’s state-wide prohibition. To see more about the build-up to the referendum that dried up Virginia, see yesterday’s blog post. 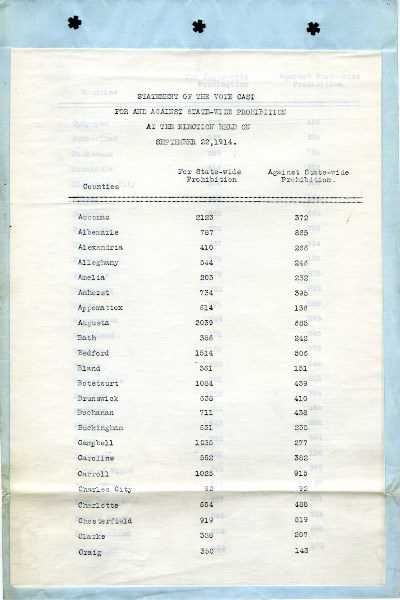 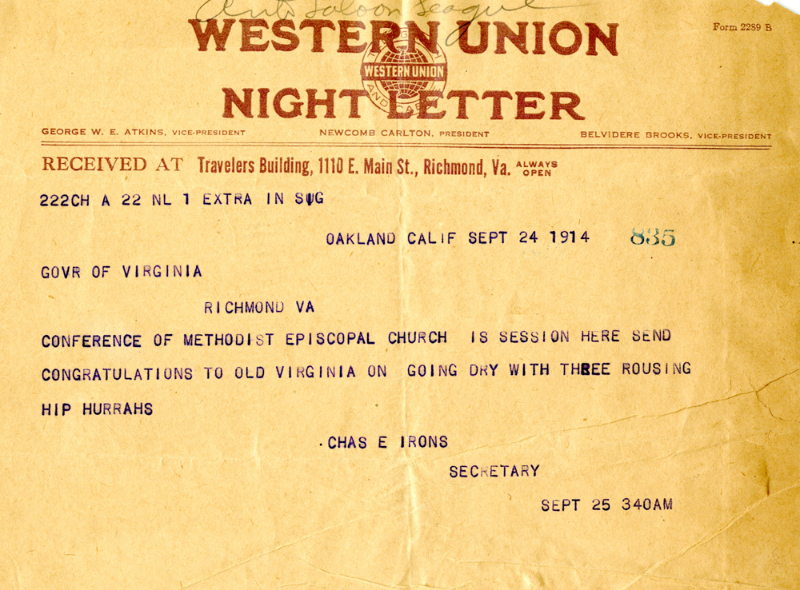 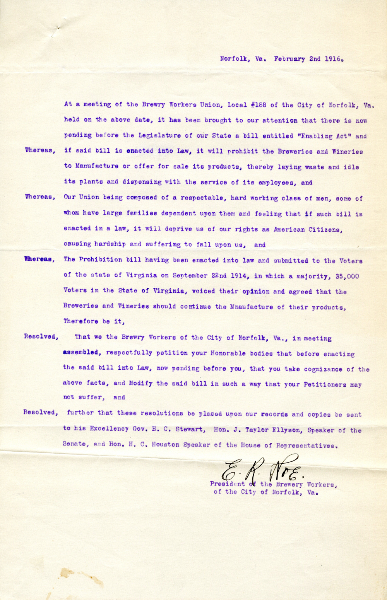 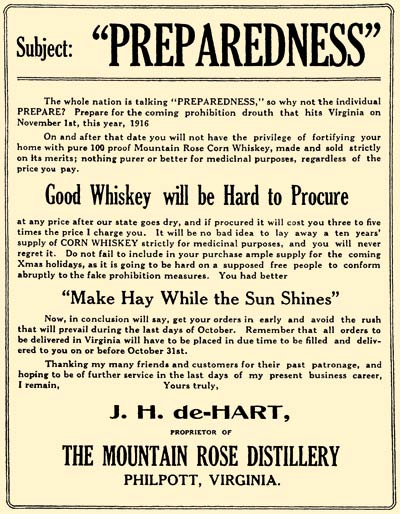 Advertisement for the Mountain Rose Distillery 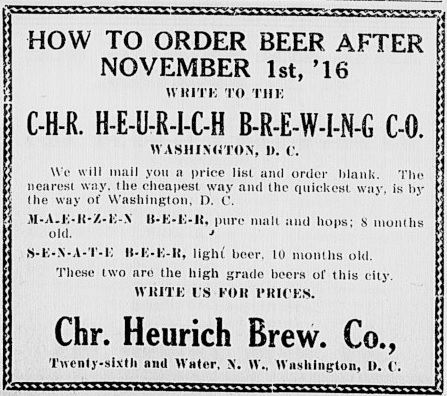 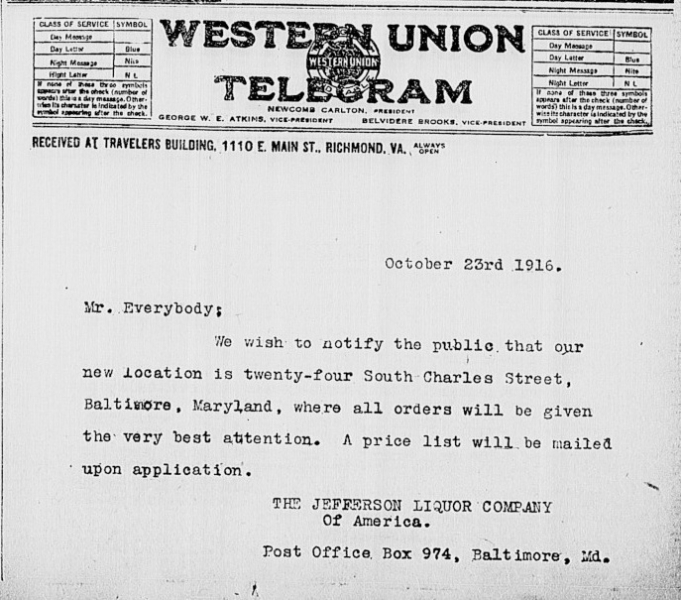 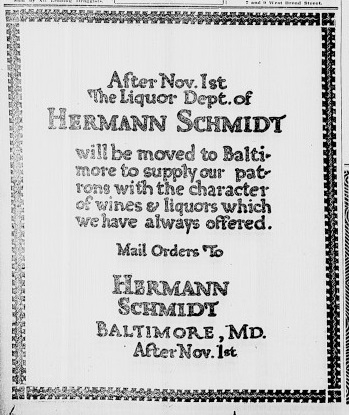 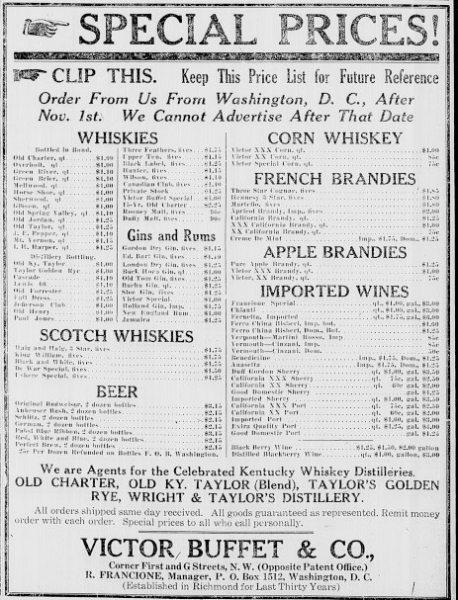 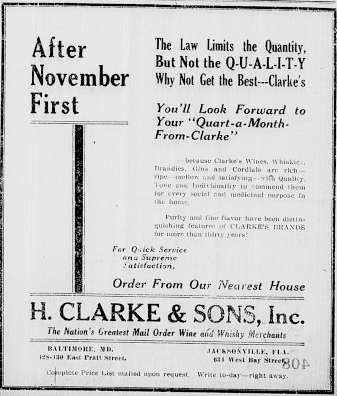 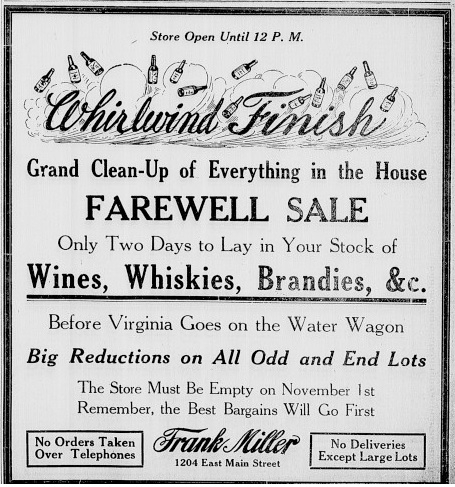 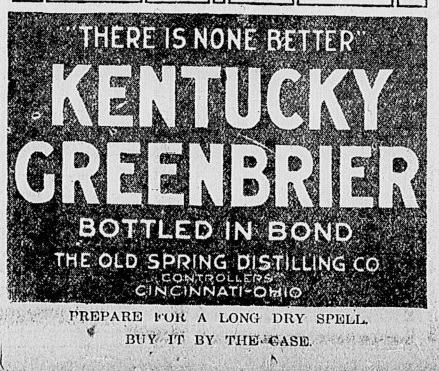 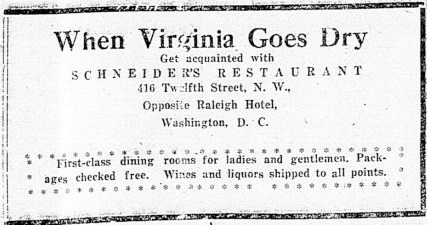 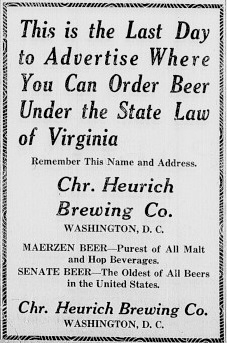 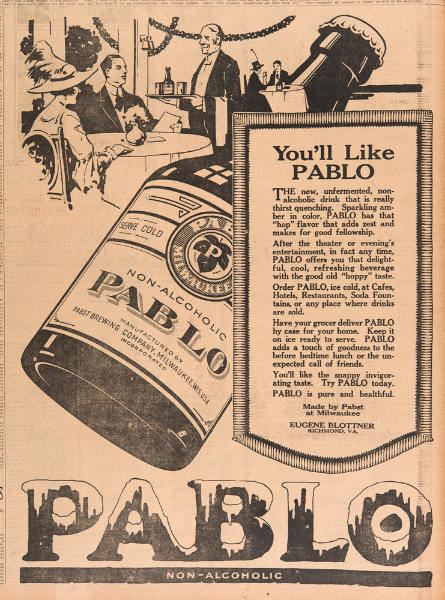 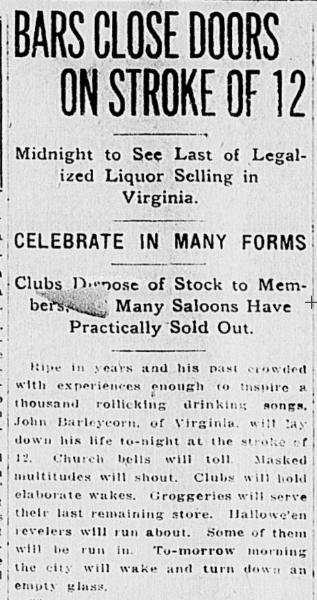 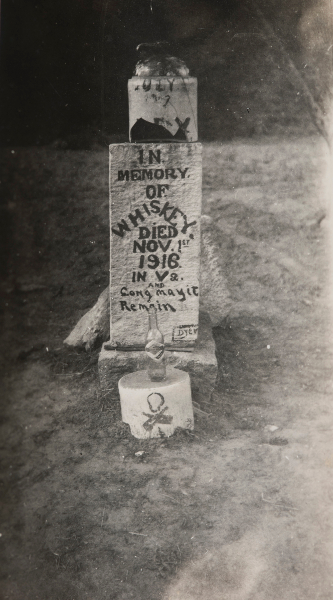 The drys won out on 22 September 1914. The Temperance cause heralded this as a “mighty victory.” And indeed, state-wide prohibition won out by almost 60% of the vote, with 94,251 votes in favor and 63,086 opposed. Interestingly, the total voter turnout of 158,000 was significantly higher than the total for the 1912 Presidential election, which had a turnout of 136,900. Out of 100 counties, 71 voted dry, as well as every city except for Alexandria, Norfolk, Williamsburg, and Richmond.

State-wide prohibition went into effect on 1 November 1916, heralded by church rallies where parishioners rang bells and shouted out “Hallelujah!” at midnight. Despite the new law, alcohol didn’t completely disappear from the Commonwealth. Of the six major breweries in Virginia at the time, only one—Portner’s of Alexandria—closed down immediately. Brewers and distillers were temporarily allowed to remain in business as long as they sold their products out of state. Several breweries attempted to establish themselves as sellers of soda or other non-alcoholic beverages, with limited success. In contrast, the Garret and Company winery, located near Norfolk since 1903, immediately closed down operations and relocated to New York and California.

Home consumption was permitted in Virginia as long as the alcohol had been purchased before 1 November 1916. Wine could be purchased for religious purposes and doctors could prescribe alcohol for medicinal purposes, resort hotels could purchase alcohol for cooking or massages, and the heads of families could import small amounts for personal use—1 quart of liquor, 1 gallon of wine, or three gallons of beer per month. Several alcohol distributors in DC or Maryland capitalized on this particular loophole, placing advertisements in Virginia newspapers advising readers of their wares and prices so they would know where to order their booze once the prohibition laws went into effect. Virginia distributors moved to the wet state of Maryland or sold off their entire stock in the days leading up to November.

Just as would be seen later with nation-wide prohibition, Virginia struggled to enforce its ban on alcohol. Virginia shared the Chesapeake Bay with Maryland, which not only failed to introduce an early state-wide prohibition but refused to enforce the 18th Amendment after it was passed in 1920; between that and the wide expanse of coastline, Virginia had too many routes for smuggling. Additionally, the mountains of Virginia fostered a long tradition of moonshine production, which found a new market as legal liquor disappeared from the scene.

Further information about Virginia’s attempts at enforcement, both before and after national prohibition went into effect, can be found in the papers of the Virginia Prohibition Commission, as explored in this past blog post. The VPC was created in 1916 to enforce the Prohibition Act, and then their position was further clarified and altered in 1918 when the Mapp Prohibition Act completely outlawed the manufacturing of spirits. After the ratification of the 18th Amendment in 1919, the Virginia Prohibition Commission began to operate in conjunction with federal officials, although it retained most of the responsibility for enforcing prohibition laws in the Commonwealth.