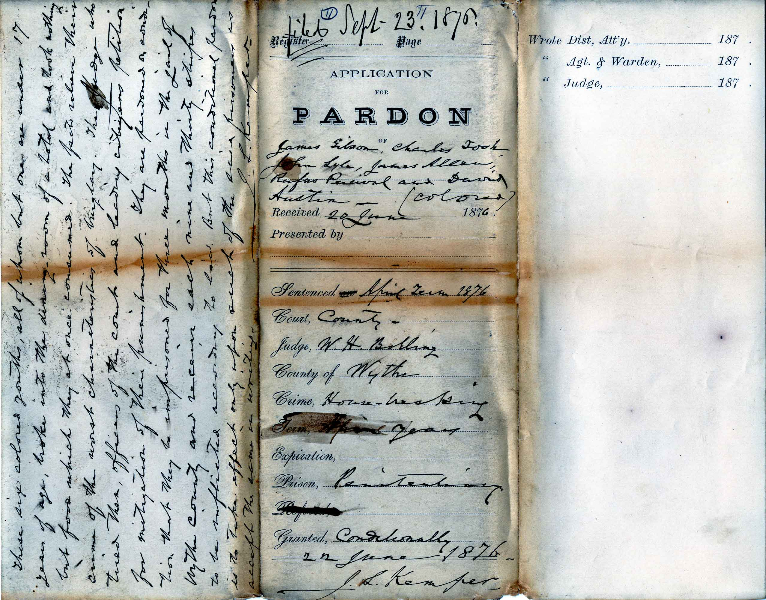 “A Frolicsome Freak of Boyhood”

Editor’s Note: The Library of Virginia, in partnership with the Virginia Foundation for the Humanities, sponsored four residential fellows for the 2016-2017 academic year to conduct in-depth research in the Library’s collections. Catherine Jones, associate professor of history at the University of California, Santa Cruz, spent the fall semester researching and writing, Child Prisoners and the Limits of Citizenship in the New South.

On 22 September 1876, Governor James L. Kemper issued a conditional pardon to six inmates housed at the Virginia State Penitentiary in Richmond. He explained his action by noting that all but one was “under seventeen years of age.” Further, he characterized the boys’ actions—stealing and consuming food from a hotel dining room—as an “impulsive and frolicsome freak of boyhood.”  Kemper’s pardon and the appeals that prompted it, shed light on a tricky question— what did age mean to Virginians in the nineteenth century, particularly as it related to criminal responsibility?

The Virginians pardoned by the Governor—James Gibson, Charles Tosh, John Lyle, Rufus Percival, James Allen, and David Austin—were committed to the penitentiary on 11 May 1876. The Wythe County Court had sentenced the youths to five years in the penitentiary for burglary and theft of food valued at under $9. These six young prisoners became part of a penitentiary population that grew rapidly between the end of the Civil War and the beginning of the twentieth century. Over 2,000 Virginians between the ages of nine and seventeen passed through the gates of the State Penitentiary between 1865 and 1902. The large population of young convicts demonstrated the relative indifference of Virginia law to age as a mitigating factor in assessing criminal culpability and determining sentences. Prior to the 1890s the state lacked separate facilities to house young offenders convicted of crimes, and it was not until the 1920s that a system of juvenile courts developed. The population of children incarcerated in the state also reflected the discriminatory application of law that left African American children particularly vulnerable to incarceration. 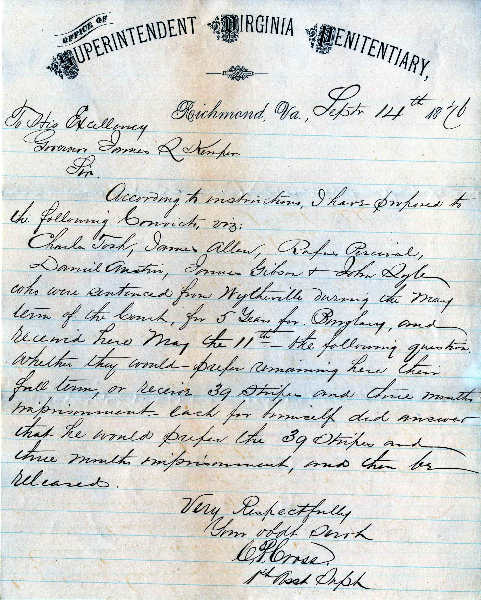 Most young inmates are difficult to trace in archival records beyond the penitentiary’s prison registers in which authorities recorded prisoners’ date of commitment, sentence, and crime, along with descriptive information like height, color, and notable marks.  Gibson, Tosh, Lyle, Percival, Allen, and Austin were unusual, however. Unlike most prisoners, they did not serve out their full sentences. In this instance, the prisoners were released after three months of hard labor and the additional punishment of thirty-nine lashes. The governor’s pardon reflected an effective lobbying effort by community members who sought the youths’ release. Their appeals, along with records of the court’s deliberations, were attached to the prisoners’ pardon application, now filed in the Secretary of the Commonwealth Executive Papers at the Library of Virginia. Those records provide insight into the prisoners’ families, community views of witnesses’ reliability, and the social habits of young men.

Further, they reveal that Virginians’ ideas about youth and criminal culpability were unsettled, as the law seemed to dictate one outcome while the public pushed for another. Although spared their full sentence, James Gibson and his friends learned that a “frolicsome freak of boyhood” could be a dangerous proposition in nineteenth century Virginia.