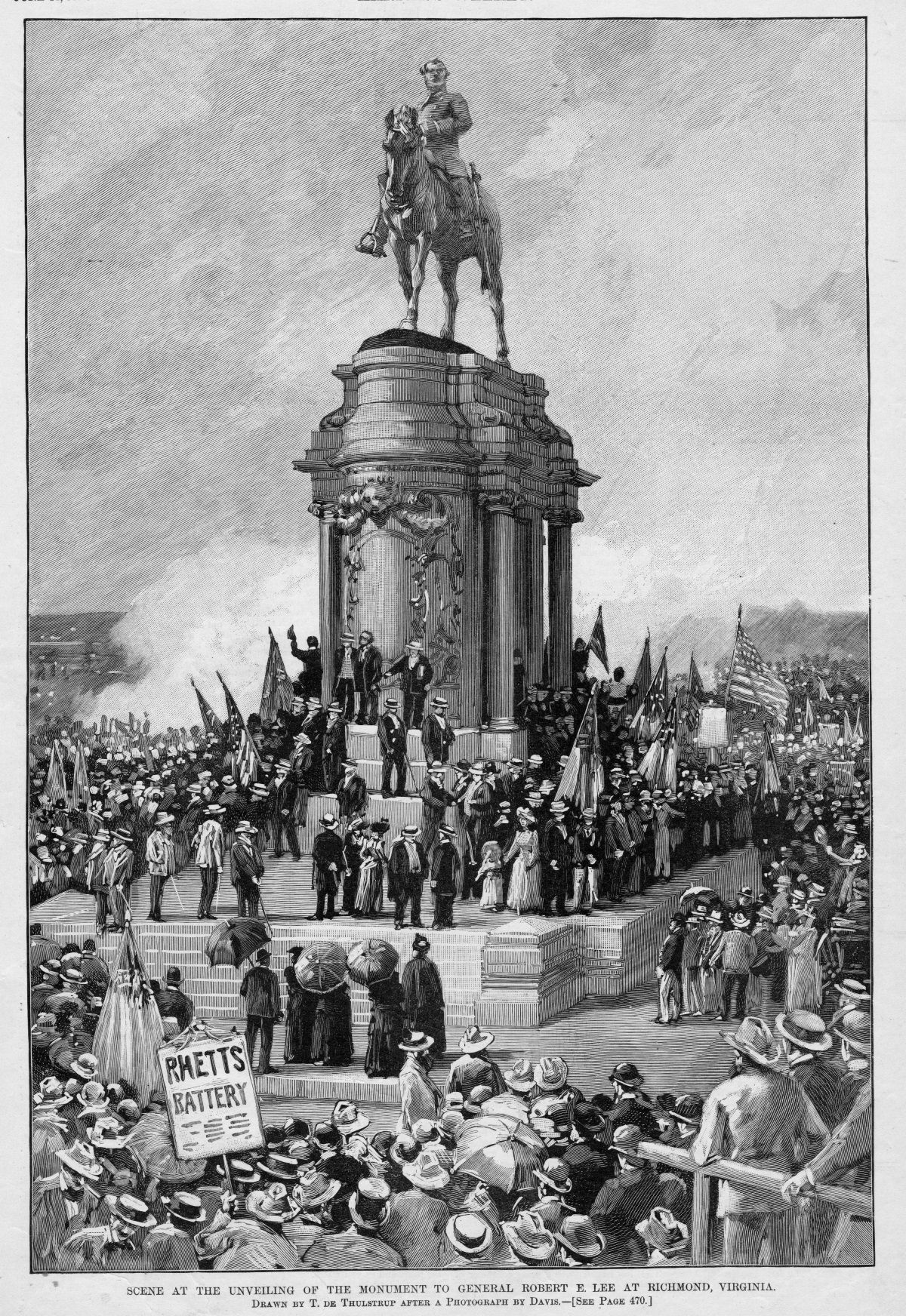 Complicated History: The Memorial to Robert E. Lee in Richmond

People have always been complex, making history a complicated topic. When history is distilled down to be straightforward, the reality of human failings and flaws are bypassed in favor of a clear-cut narrative. When national and regional pride are added to the mix, historical facts often become controversial. Citizens of the American South know this well; modern debate over the history of the Confederacy, and its monuments, easily becomes heated.

Though the Civil War ended in 1865, the war continued throughout the South, rearing its head in acts of violence and terror against Black communities, now ostensibly free citizens of the United States. While some efforts to sow fear were overt, such as those of racist groups Knights of the White Camellia, the Red Shirts, or the Ku Klux Klan, others were unspoken. In addition to vigilante terrorism, the lives of Black Southerners were made worse through legal means. In Virginia, poll taxes were enshrined in the constitution in 1876, shrinking the black electorate. Black men were further disenfranchised after the Virginia constitution was rewritten in 1902.

It is a matter of much contention today whether these monuments to Confederate leaders were one such message to the Black communities of the South or simply monuments built to honor the Civil War dead and Southern history. 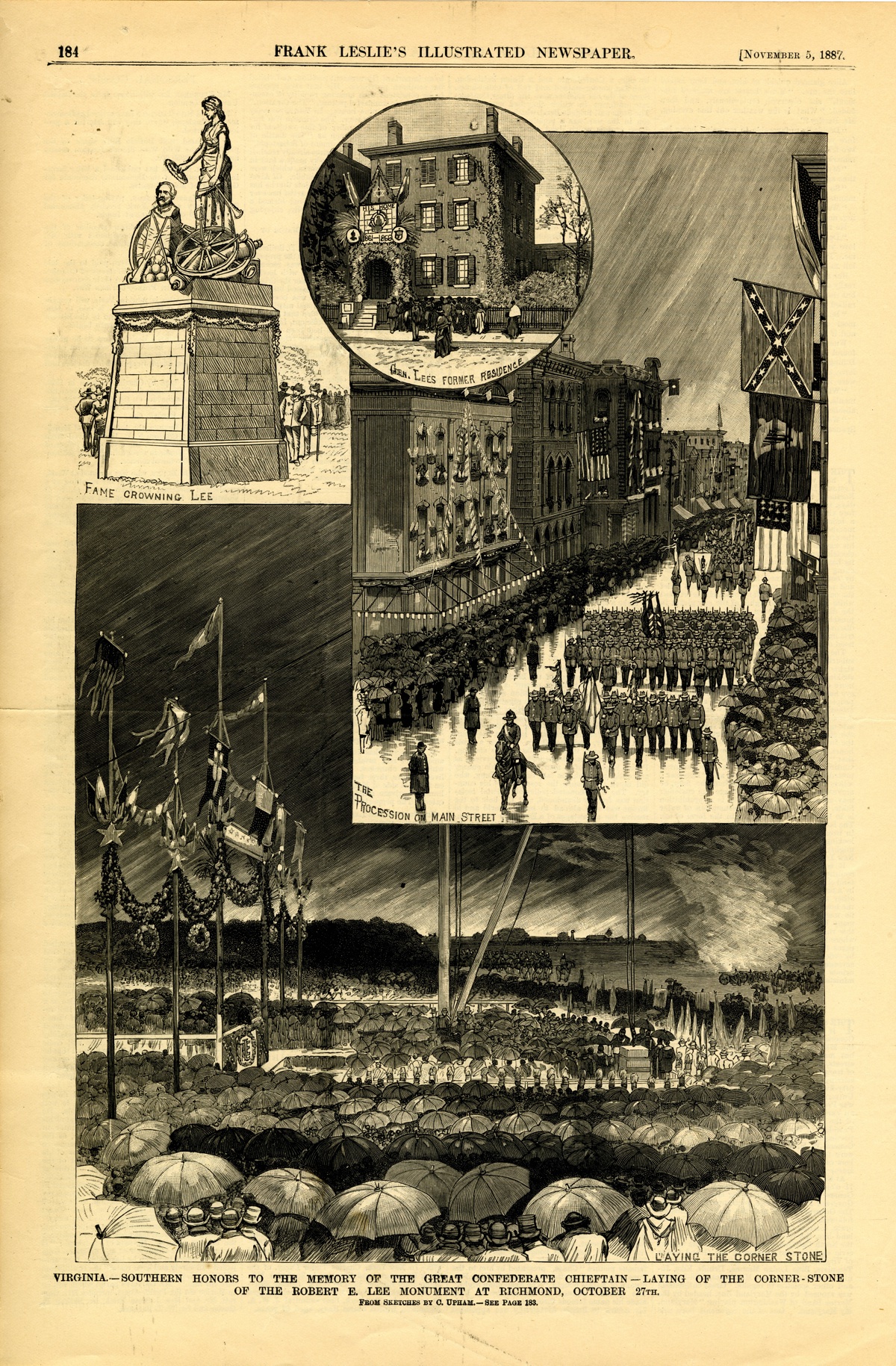 Contemporary criticism of the monuments, from Northerners and Black Southerners alike, mainly focused on the argument that these massive monuments to Confederate generals helped to perpetuate the myth of the Lost Cause. The Lost Cause, a philosophy that emerged in the South immediately after the Civil War, served as a way to help white Southerners accept their loss and justify the motives of, and continued reverence to, the Confederacy.

Historian John Simpson wrote that the Lost Cause was “Confederate nostalgia” which aimed to “resurrect Southern pride and self confidence.” The myth argues that the Civil War was fought not over slavery, but instead over states’ rights, and that Confederate soldiers sought only to protect their homelands from the invading North. In “The Cult of the Lost Cause,” Simpson suggests that the most important part of Lost Cause thinking was “moral magnificence” of Confederate leaders.[1]

This idea of Southern soldiers as morally pure is illustrated in a 1903 article in the Register of Kentucky State Historical Society that described fallen Confederate soldiers as “heroes” who “lost their young, noble lives to defend the sweetest land on earth from degradation.”[2]

While the Lost Cause may have been a balm to wounded Southern pride and eased acceptance of their new reality, it is simply not true. No war is fought for one reason alone, but the role of slavery in the secession of the South and the Civil War cannot be overstated. Vice President of the Confederate State of America Alexander Stephens underscored the role of slavery as impetus for the Civil War in his Cornerstone speech in Savannah, Georgia on March 21, 1861. Alexander Stephens proclaimed that “[The Constitution] rested upon the assumption of the equality of races. This was an error. Our new government is founded upon exactly the opposite idea; its foundations are laid, its corner- stone rests upon the great truth, that the negro is not equal to the white man; that slavery — subordination to the superior race — is his natural and normal condition.” [3]

Some Southerners were incensed and offended by the erasure of history perpetrated by the Lost Cause even before the end of the war. The Richmond newspaper Southern Punch fought back against claims that the Civil War was not about slavery, writing in 1864:

‘The people of the South,’ says a contemporary, ‘are not fighting for slavery but for independence.’ Let us look into this matter. It is an easy task, we think, to show up this new-fangled heresy — a heresy calculated to do us no good, for it cannot deceive foreign statesmen nor peoples, nor mislead any one here nor in Yankeeland…

Our doctrine is this: WE ARE FIGHTING FOR INDEPENDENCE THAT OUR GREAT AND NECESSARY DOMESTIC INSTITUTION OF SLAVERY SHALL BE PRESERVED, and for the preservation of other institutions of which slavery is the groundwork. [4]

To get a comprehensive perspective on the Confederate monuments in Richmond, it is eye opening to read not only newspaper coverage from the prominent white, Southern newspapers of the day, but to also take into account the Black Richmonder’s perspective. As remains the case today, multiple sources, when read together, offer a more complete picture than any one source alone.

The Robert E.Lee Statue, first of Monument Avenue’s Confederate monuments, was unveiled on May 29, 1890. The event was covered extensively, both by local and national press. The coverage the event received was not uniform; takes varied widely depending on the political leanings, race, and regional loyalties of the newspaper editor. 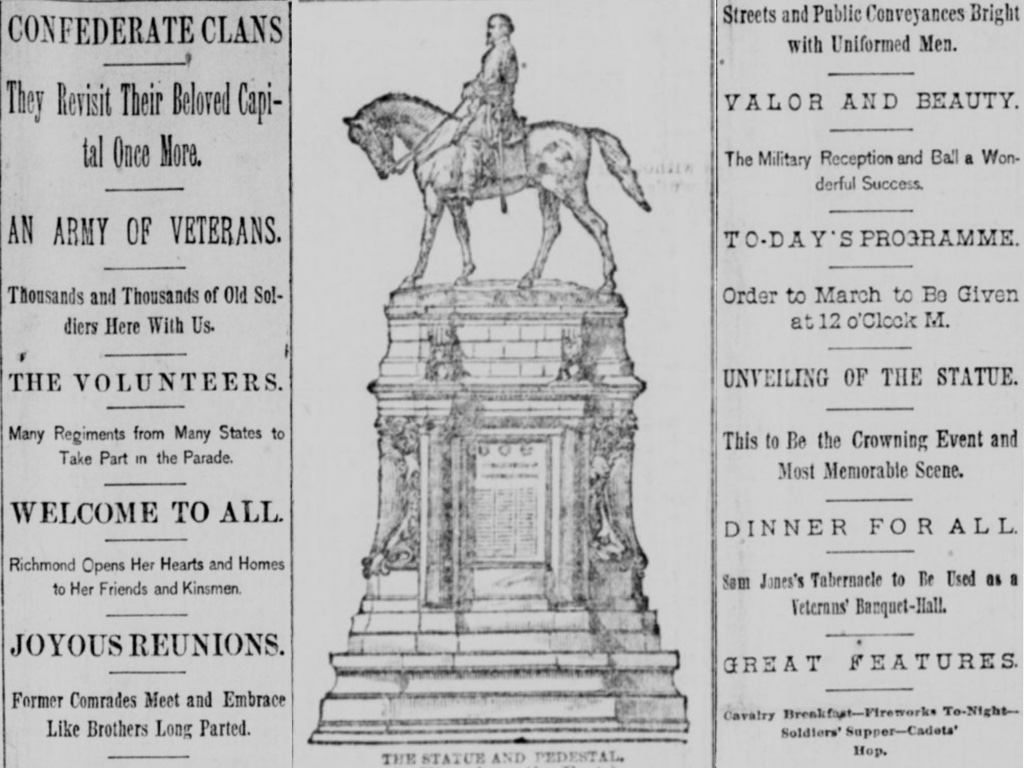 On the day of the unveiling of Robert E. Lee’s statue, two of Richmond’s most prominent white newspapers, The Times and The Dispatch, dedicated large amounts of space to reporting about the monument, and the celebration at its unveiling. The white newspapers joyfully described the pageantry in Richmond: parades, fireworks, and balls held to celebrate Confederate veterans and Robert E. Lee.

The Dispatch devoted 7 of its 8 pages to information about those coming to Richmond for the unveiling, particularly politicians and Confederate veterans’ groups, speeches held at the celebration, songs and poetry about the South and Confederacy, and a biography of Robert E. Lee. The Dispatch printed on the first page of this issue what they called “the best portrait of General Lee ever printed in a newspaper.” 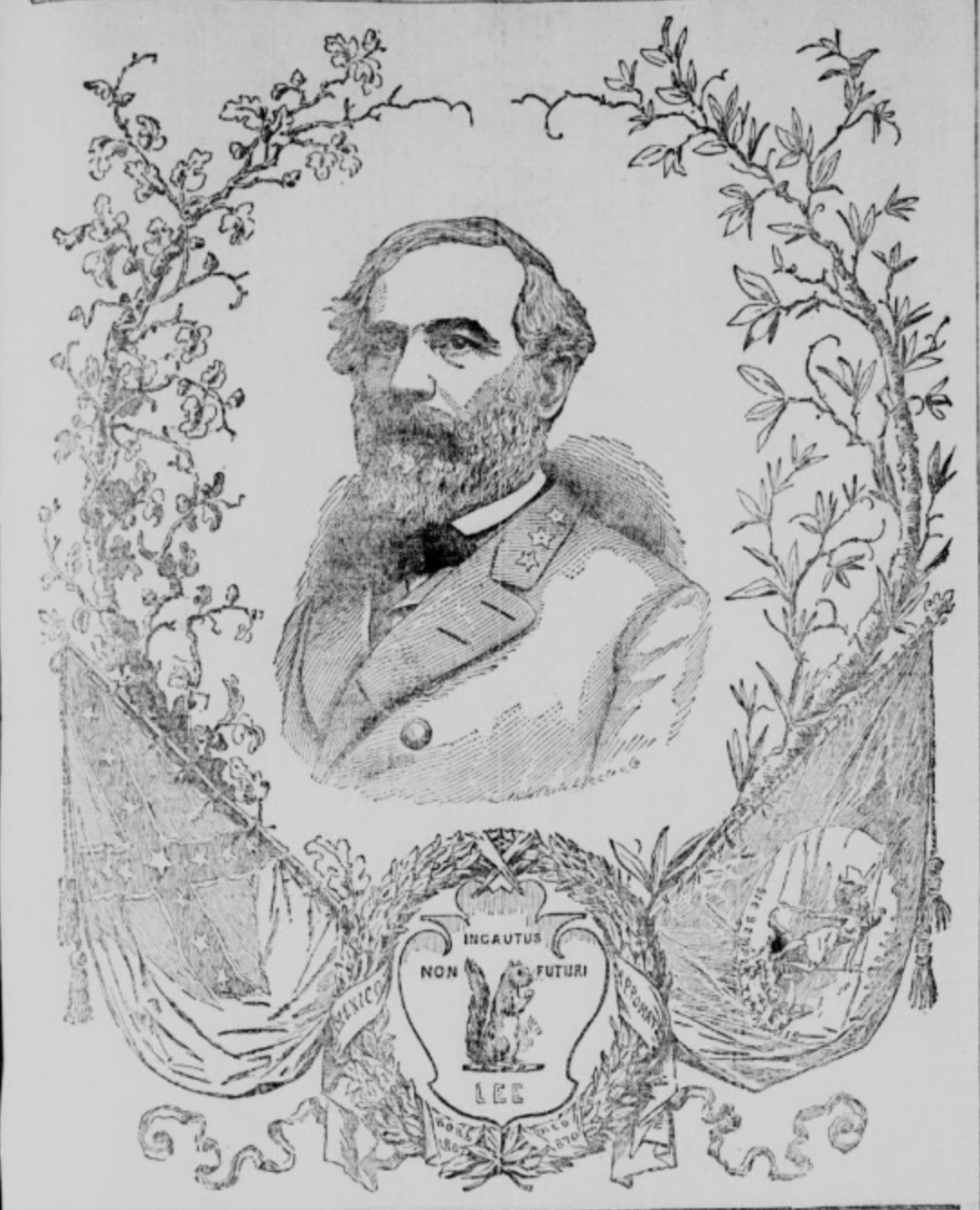 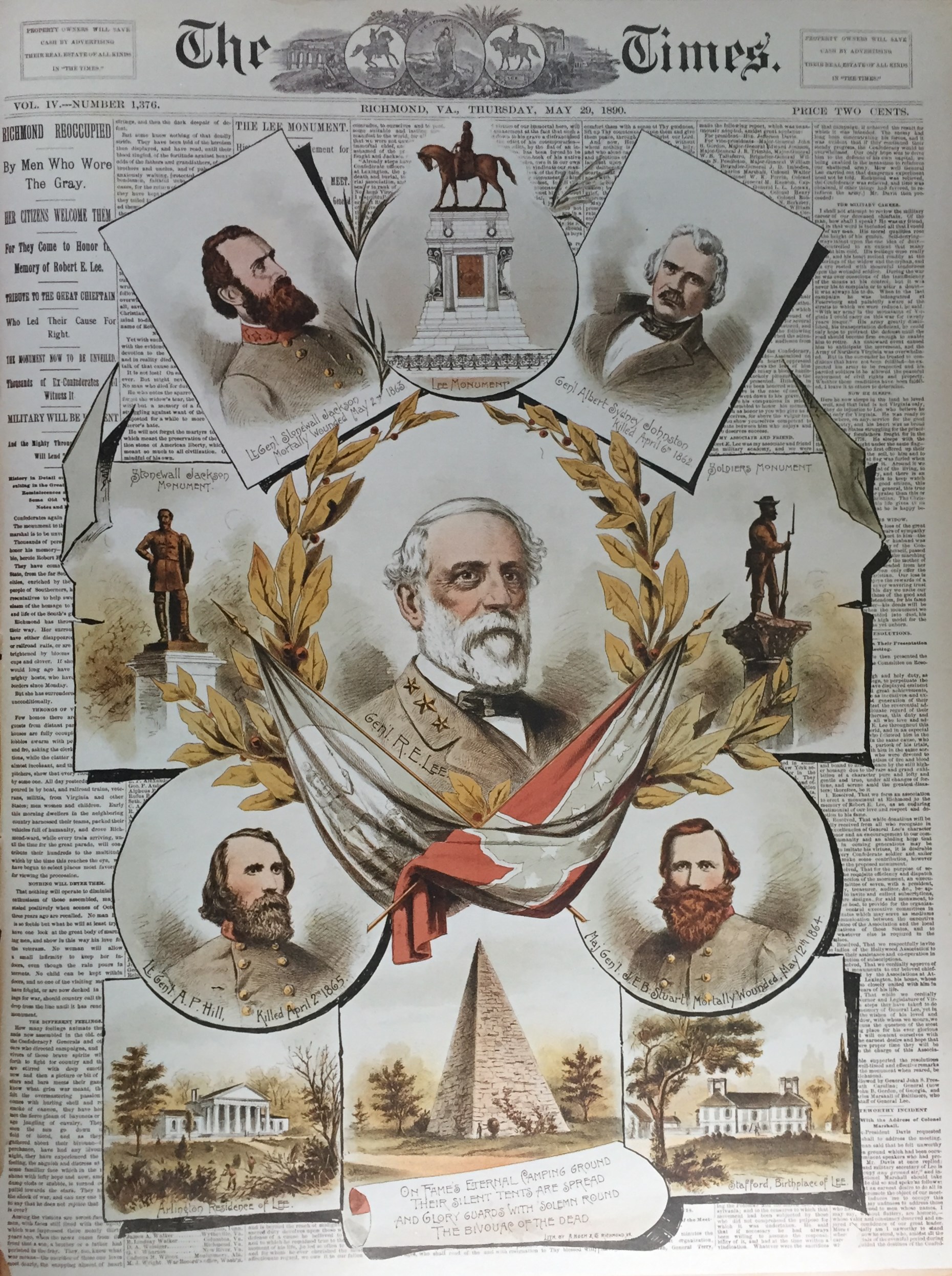 The Times published a beautiful commemorative cover page for the event, a chromo-lithograph by A. Hoen, with etchings of Jackson, A.P. Hill, Stuart, Albert Sydney Johnston, and Confederate monuments and landmarks around a large portrait of Lee. Each page of that day’s eleven page issue contained information about the festivities, histories of the war, and future monuments to come.

The reporting in the white newspapers reinforced Lost Cause narratives by focusing heavily on Lee’s character: his Christian morals, his loyalty to Virginia, and his military prowess. The Timeswrote about the impact they hoped his statue would have on children in Richmond, saying:

The work of noble men and patriotic women is ended, and they can now point with pride in the majestic memorial in granite and bronze, and tell their children in seeking human dignity, bravery, love of truth and devotion to duty and duty and affection for country, to model their lives as closely upon the lines laid down by Lee as the best means of obtaining their ambition.

The quote glosses over that Lee fought on the side which sought to maintain the institution of slavery. It is hard to argue that was done in the name of “seeking human dignity” or “love of truth.” 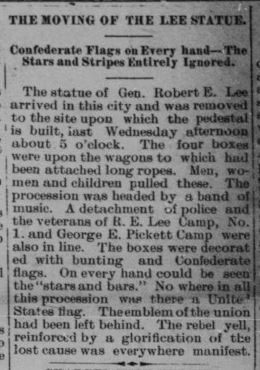 Reading the coverage from the Richmond Planet, Richmond’s prominent Black newspaper, gives a very different perspective of the events surrounding the reveal of the Lee Monument. On May 7, 1890, when the pieces of the statue arrived in Richmond, a procession followed the crates to the site of the monument. The Planet noted “The boxes were decorated with bunting and Confederate Flags. On every hand could be seen the ‘Stars and Bars.’ Nowhere in all this procession was there a United States flag. The emblem of the union had been left behind…a glorification of the lost cause was everywhere manifest.” [Source: Richmond Planet May 10 1890, ed. John Mitchell Jr, p. 1]

Editor John Mitchell, Jr. allotted just under half of a column of the front page of May 31, 1890’s issue to the statue. The article described the impressive size of the crowds and the grandeur of the parade while adding that the Confederate flags they displayed and carried were “emblems of the lost cause” and “were carried with an enthusiasm that astounded many.” It was clear to Mitchell, from the number of veterans who came back to Richmond, once more joining together in the rebel yell, that “they still clung to theories which were presumed to be buried for all eternity.”  The brief article ends with the admonishment: “The south may revere the memory of its chieftains. It takes the wrong Steps in so doing, and proceeds to go too far in every similar celebration. It serves to retard its progress in the country and forges heavier chains with which to be bound.”

On the second page of the same issue, a piece titled “What it Means,” discussed the display of Confederate symbols in Richmond. It warned that the result of revering Confederate generals like Lee, and  considering them equal to Washington or other Founding Fathers would have far reaching effects on the future of America.  “This glorification of States Rights Doctrine- the right of secession, and the honoring of men who represented that cause…will ultimately result in handing down to generations unborn a legacy of treason and blood…it serves to reopen the wound of war.” 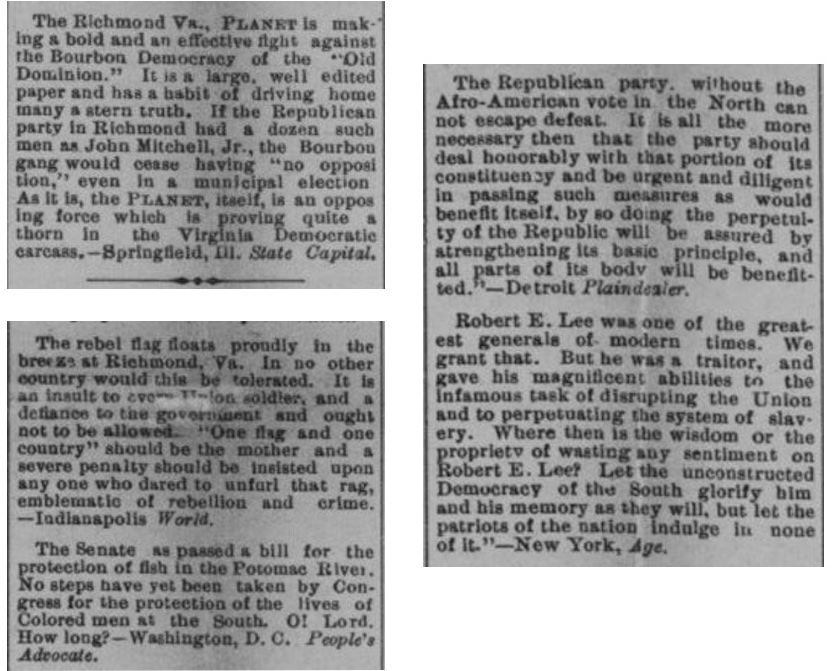 In contrast to the white newspaper’s fawning reporting on the Confederacy, the Richmond Planetreprinted in full Kansas Senator John J. Ingalls’ speech delivered at Gettysburg on May 30, 1890, in honor of Union forces on Memorial Day. Ingalls’ speech was critical of the Confederacy, and of Lee specifically, calling him a traitor against his country and leader “of the most causeless rebellion that ever occurred since the devil rebelled against heaven.”

In the same June 7, 1890 issue that printed Ingalls’ speech, the Planet reprinted clips from other Black newspapers in a column titled “Voice of the Colored Press.” These editorials read like messages of solidarity from around the United States.

From the Indianapolis World: “The rebel flag floats proudly in the breeze at Richmond, Va…It is an insult to every union soldier…a severe penalty should be insisted upon any one who dared to unfurl that rag, emblematic of rebellion and crime.”

Springfield, Illinois’s State Capital praised Mitchell’s “habit of driving home many a stern truth…As it is, the Planet, itself, is an opposing force which is proving quite a thorn in the Virginia Democratic carcass.”

On the bottom of the second page of that issue, John Mitchell, Jr. wrote of Black men: “He put up the Lee Monument, and should the time come, he’ll be there to take it down.”

There are aspects of United States history which are not talked about and therefore not understood. While it is normal to want to hold up the best parts of your country, patriotism and facing uncomfortable realities are not mutually exclusive. By reading narratives that have historically been ignored, we take a step towards a better understanding of our past.