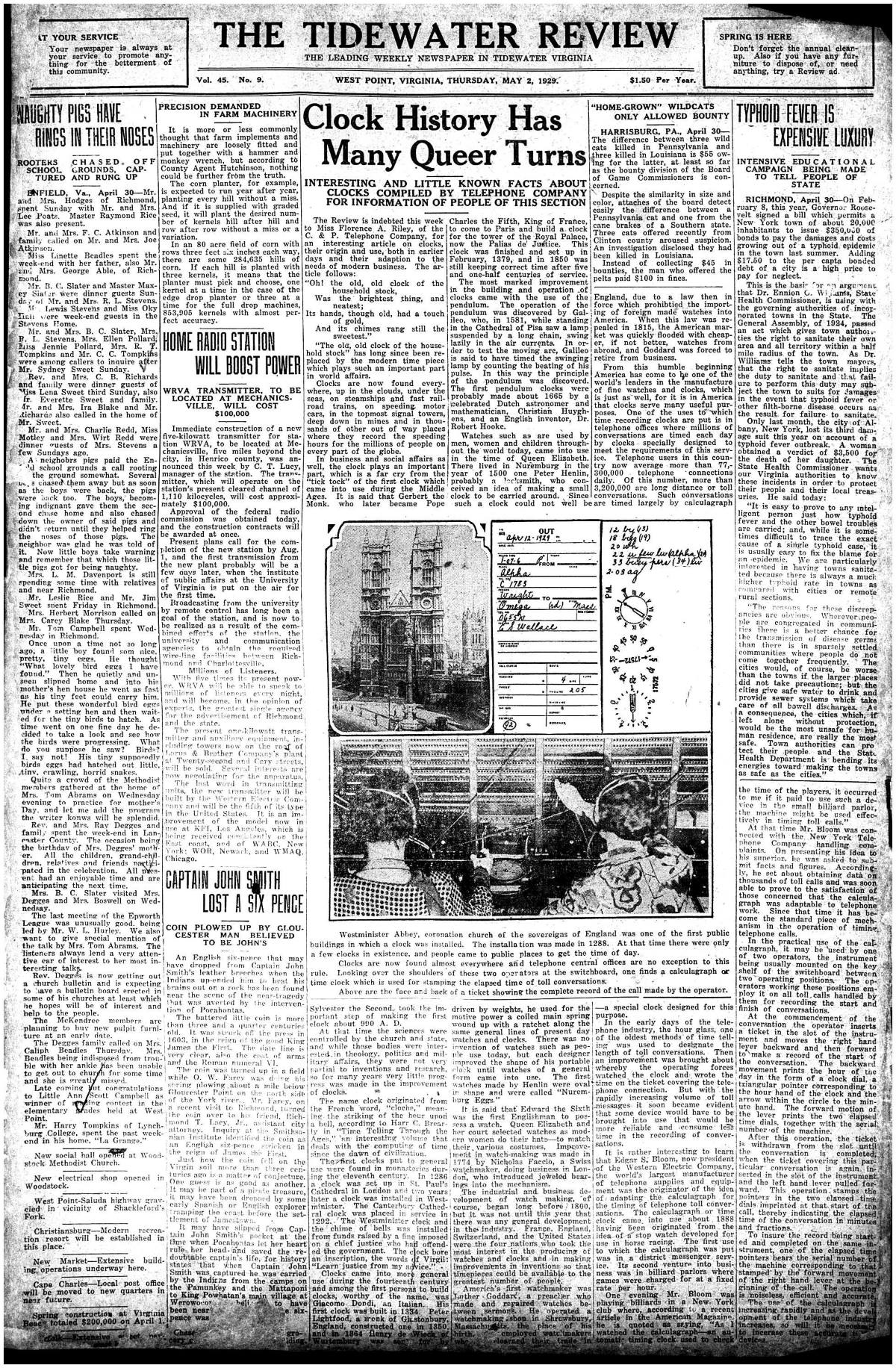 In the last month the Project has transitioned a number of newspapers, granting an allowance of alliteration, from danger and decay to safety and stability.

As, for example, the following: 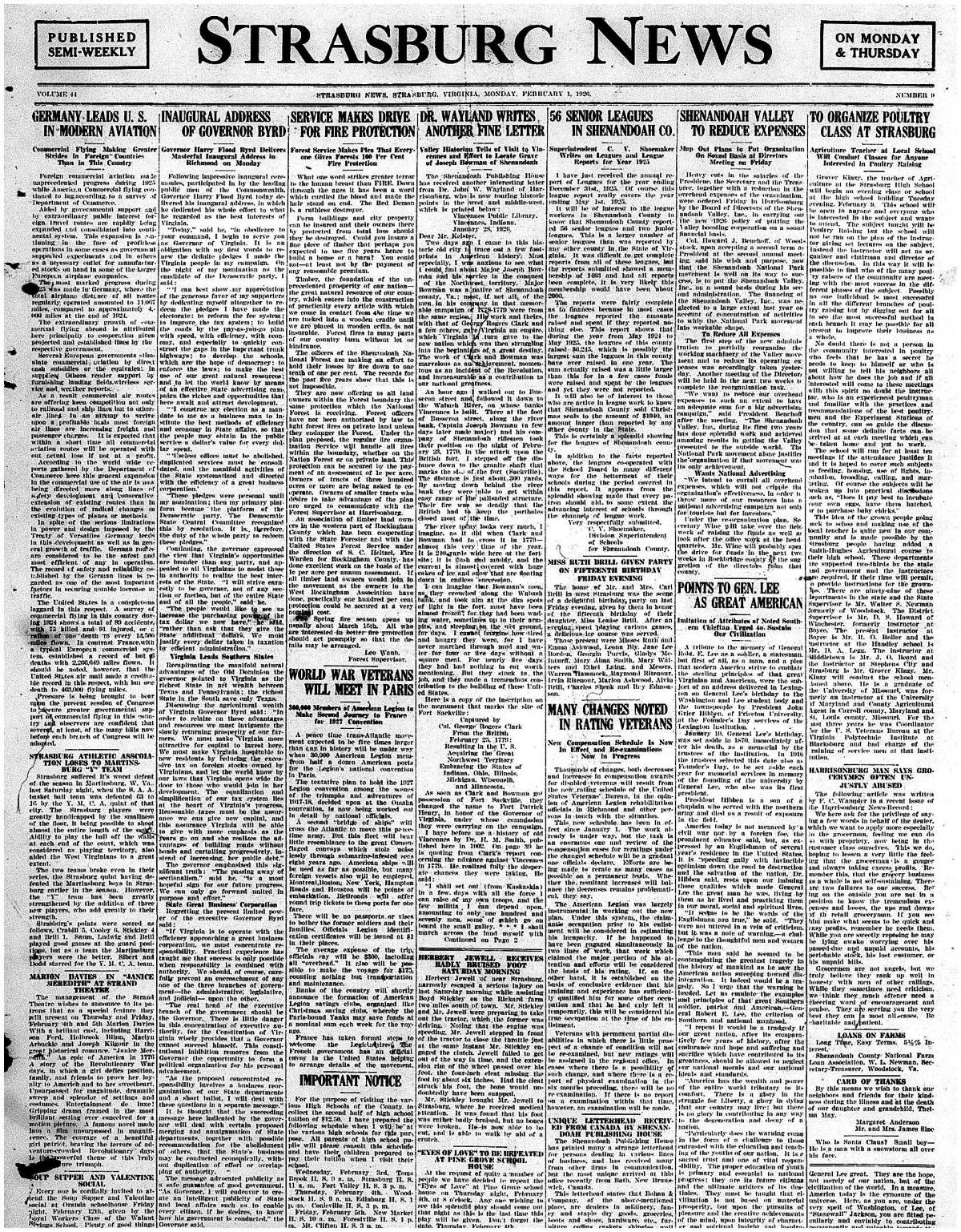 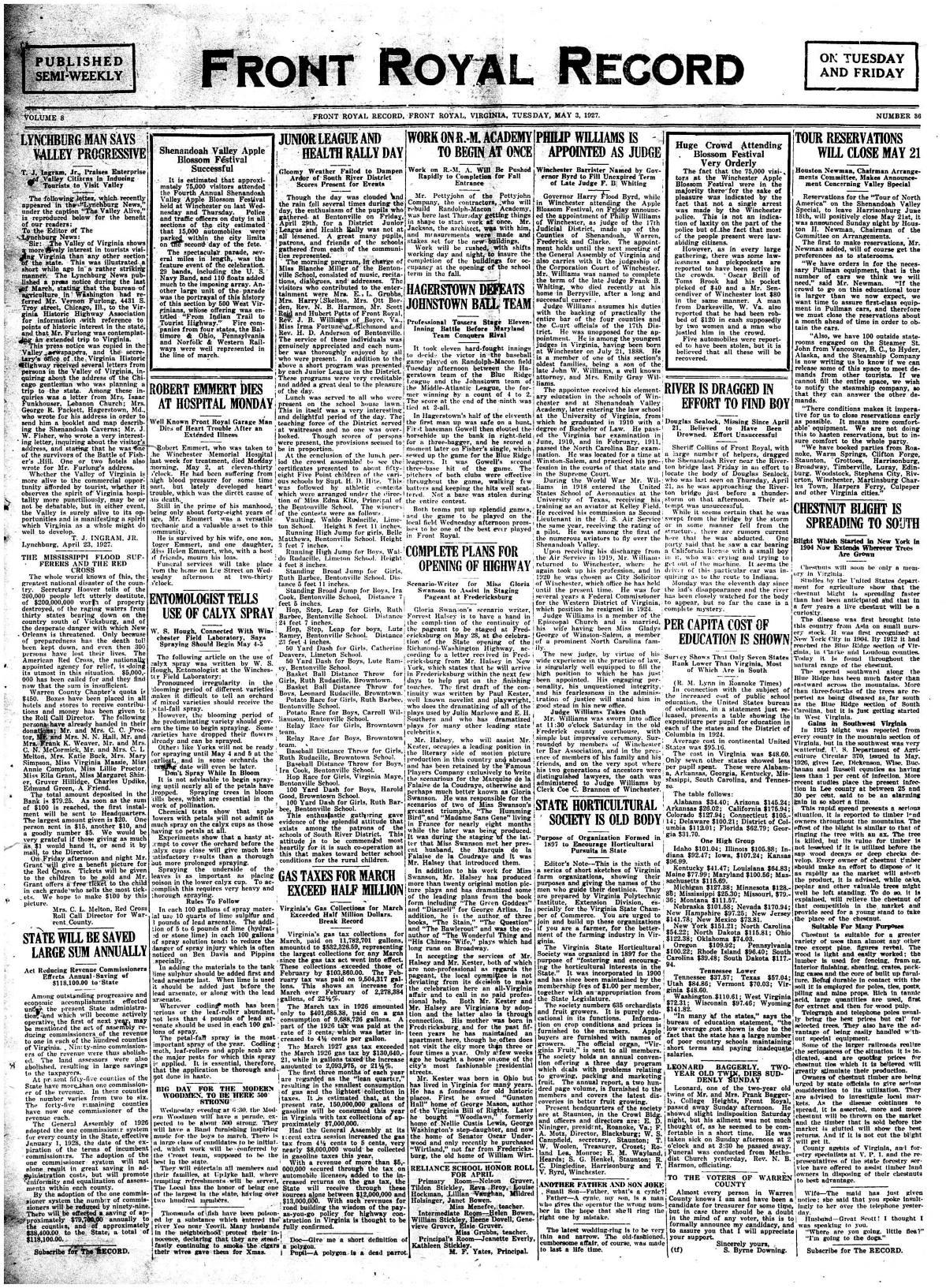 Maybe our most challenging, and time consuming, restoration task in the Project’s history and so quite satisfying  to at last advance into film this very large, three pallet sized early 20th century archive kindly loaned to us by the Northern Virginia Daily (“The Best Small Daily Newspaper in Virginia!”, http://www.nvdaily.com/).  Owner and publisher E. E. Keister consolidated his quartet of newspapers (see Fit To Print August, 2012) to create the NVD (the local shorthand) in September of 1932 and, as is evident above, possessed a tight, seven columned and copy rich, illustration free sense of design.  Here’s a contrast between the Woodstock Times and the Edinburg Sentinel before Keister purchased it and folded the smaller town’s paper into the Times four miles north. 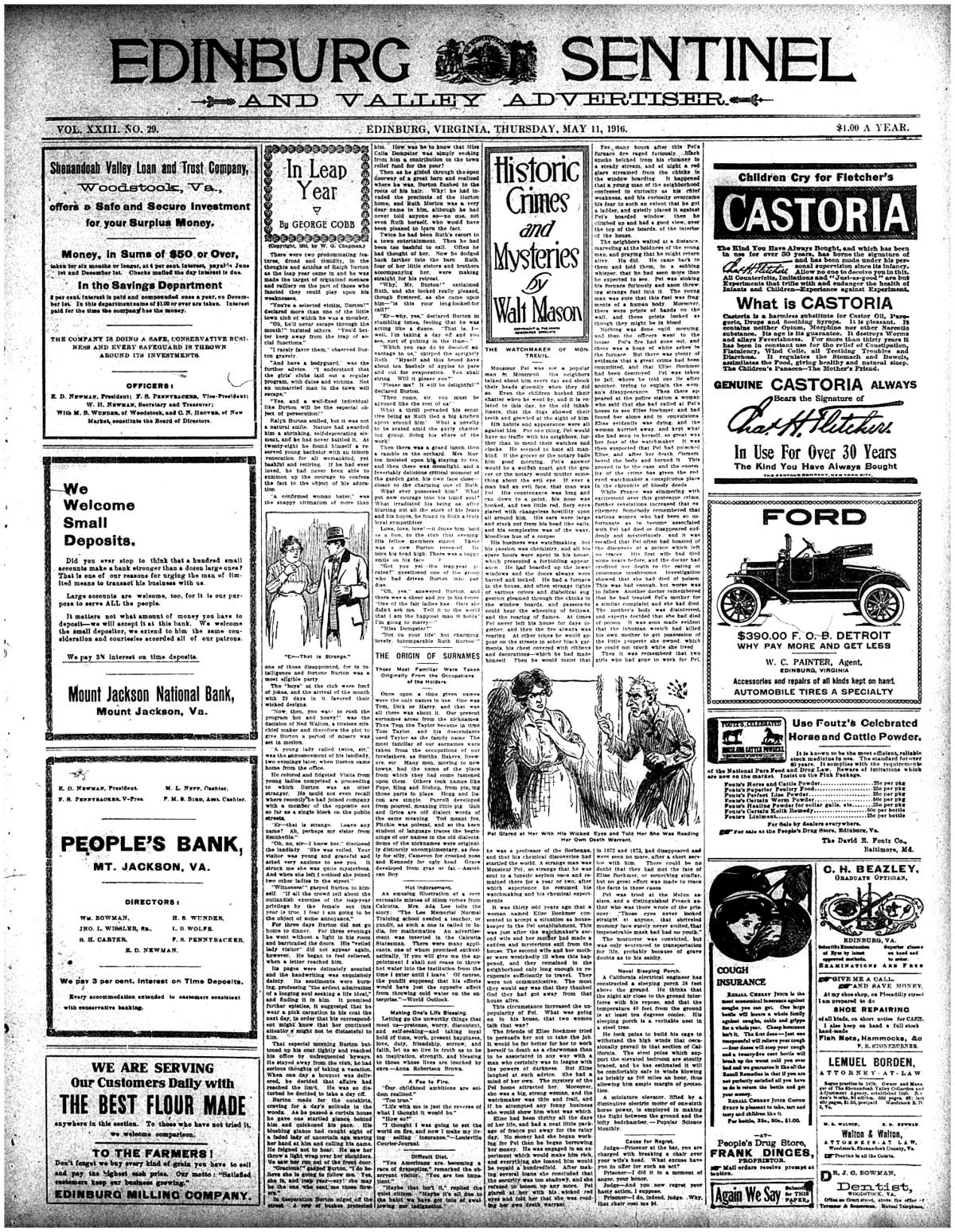 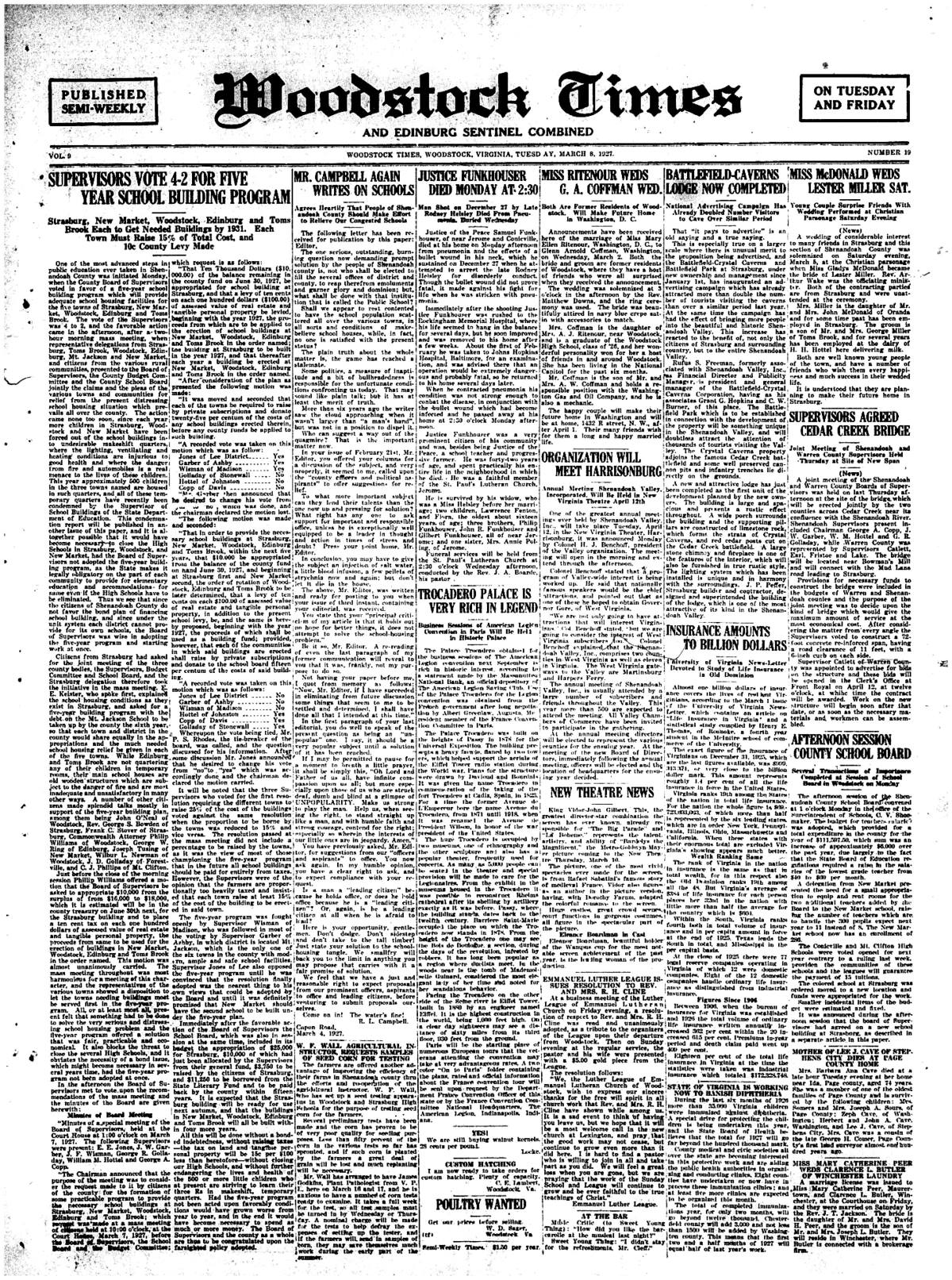 Edinburg lost its paper decades ago but it will, at least, be the claimant of this microfilm collection headed for storage soon within the Shenandoah County Library as well as, of course, here at the Library of Virginia. 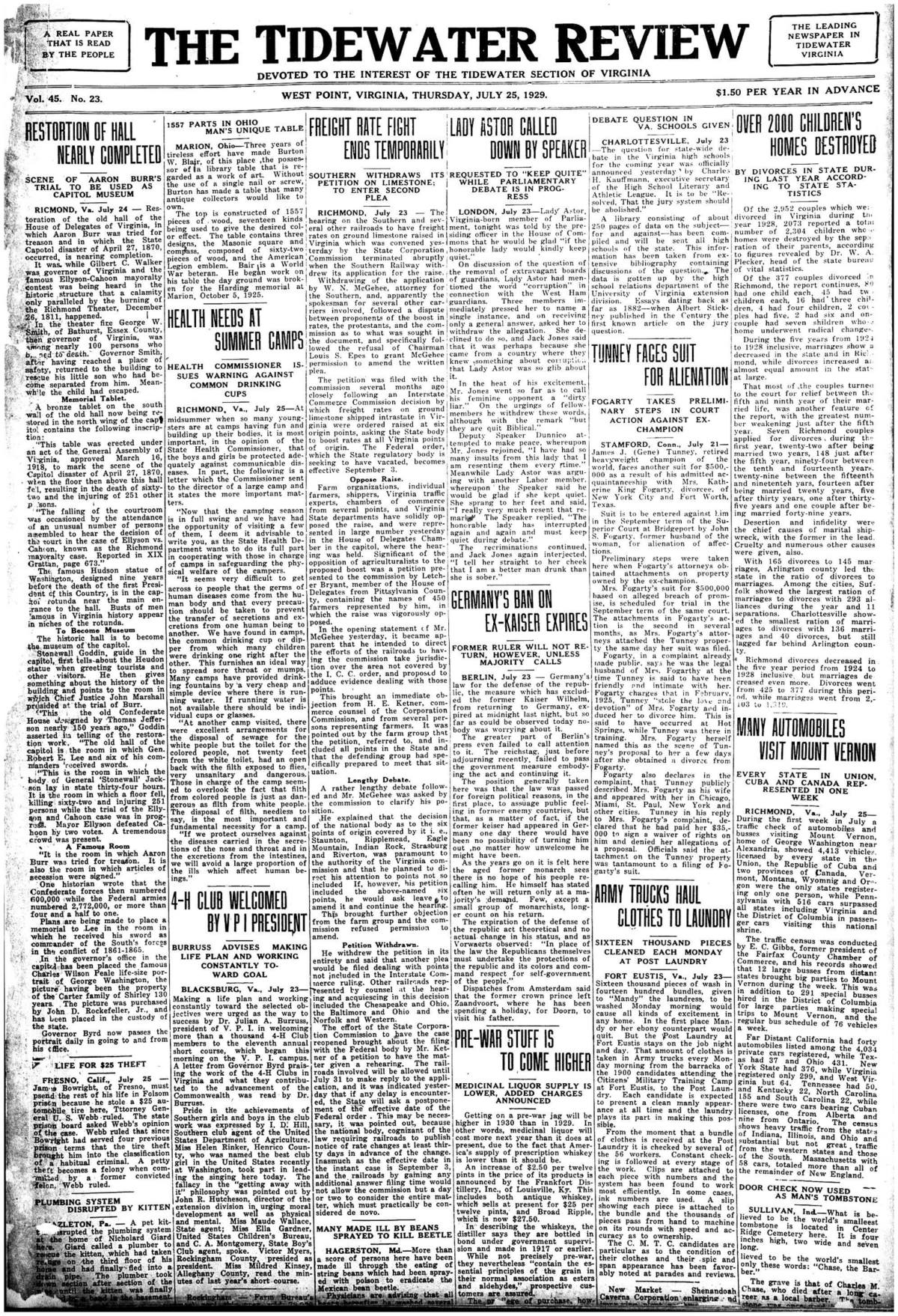 Prolonging the repair time of the Valley papers was the continuing arrival of additional papers in need of microfilm preservation forcing an additional press on the time of our restorer Silver Persinger and his two assistants Silver Persinger and Silver Persinger who, what makes you ask?, is not at all overburdened.  The completed filming of the Review and its predecessor, The West Point News, marks the last of a trio of loans by the present day Tidewater Review that addressed significant gaps in the Project’s microfilm holding.  The previously uncatalogued Chickahominy Sun profiled last May in Fit To Print was also courtesy of this West Point newspaper. 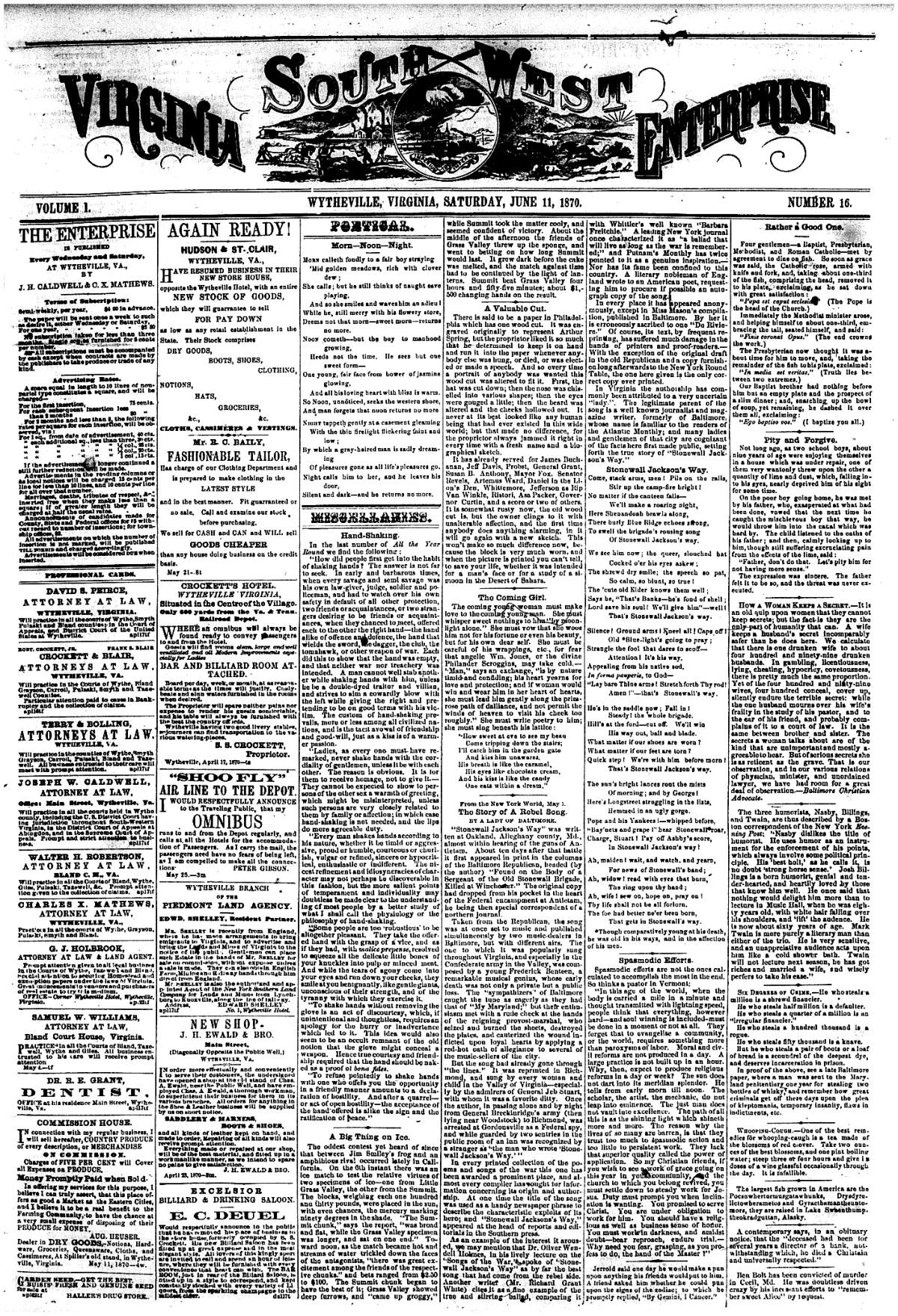 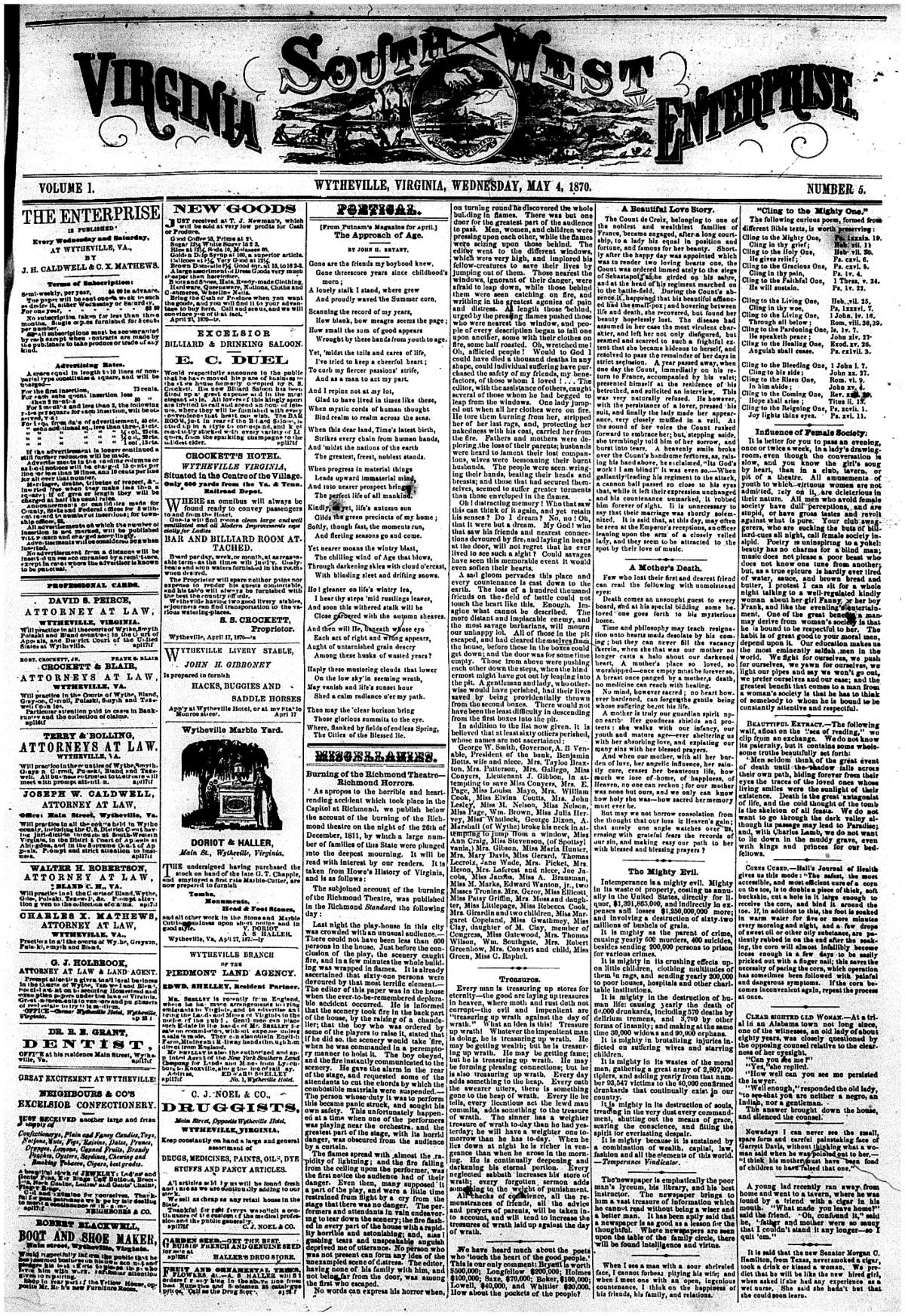 Bounding back westward to the drier and higher opposite end of Virginia, here is featured a pair of front pages from the Southwest Virginia Enterprise which encourages one to wonder just what happened to mastheads in the next century.  One finishes wondering.  They became duller.  These newspapers, bound and well preserved, required little restoration and were “turned around” reasonably fast.  Our thanks to Wytheville Community College for the loan, but  fewer thanks from the cataloger of the present to the editor of the past who repeatedly simply couldn’t remember the numerical step forward traditionally taken at the close of December.  One is reluctant to nitpick from the distance of over a 140 years but no correction until the third week of January?  Honestly.  It’s embarrassing. 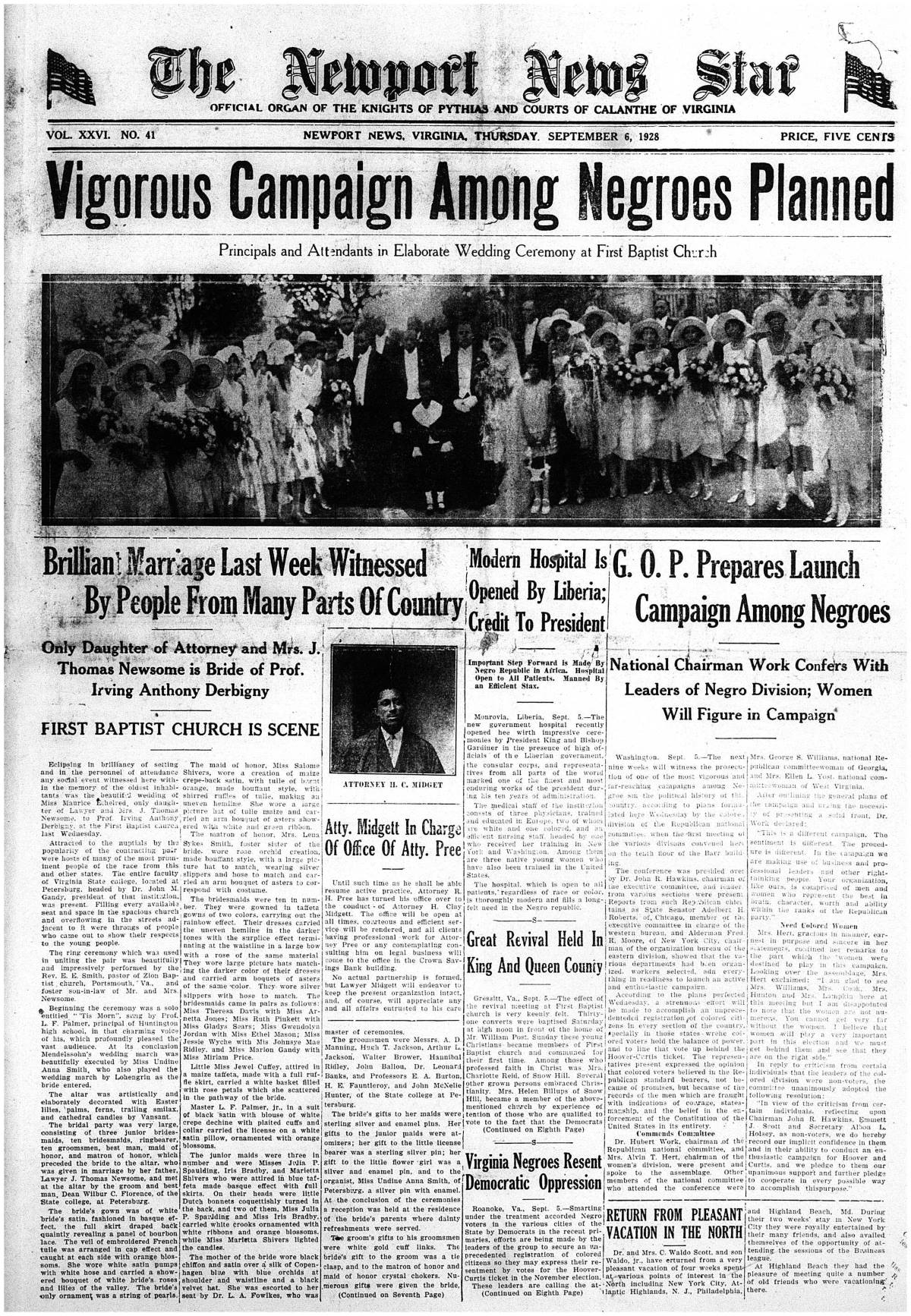 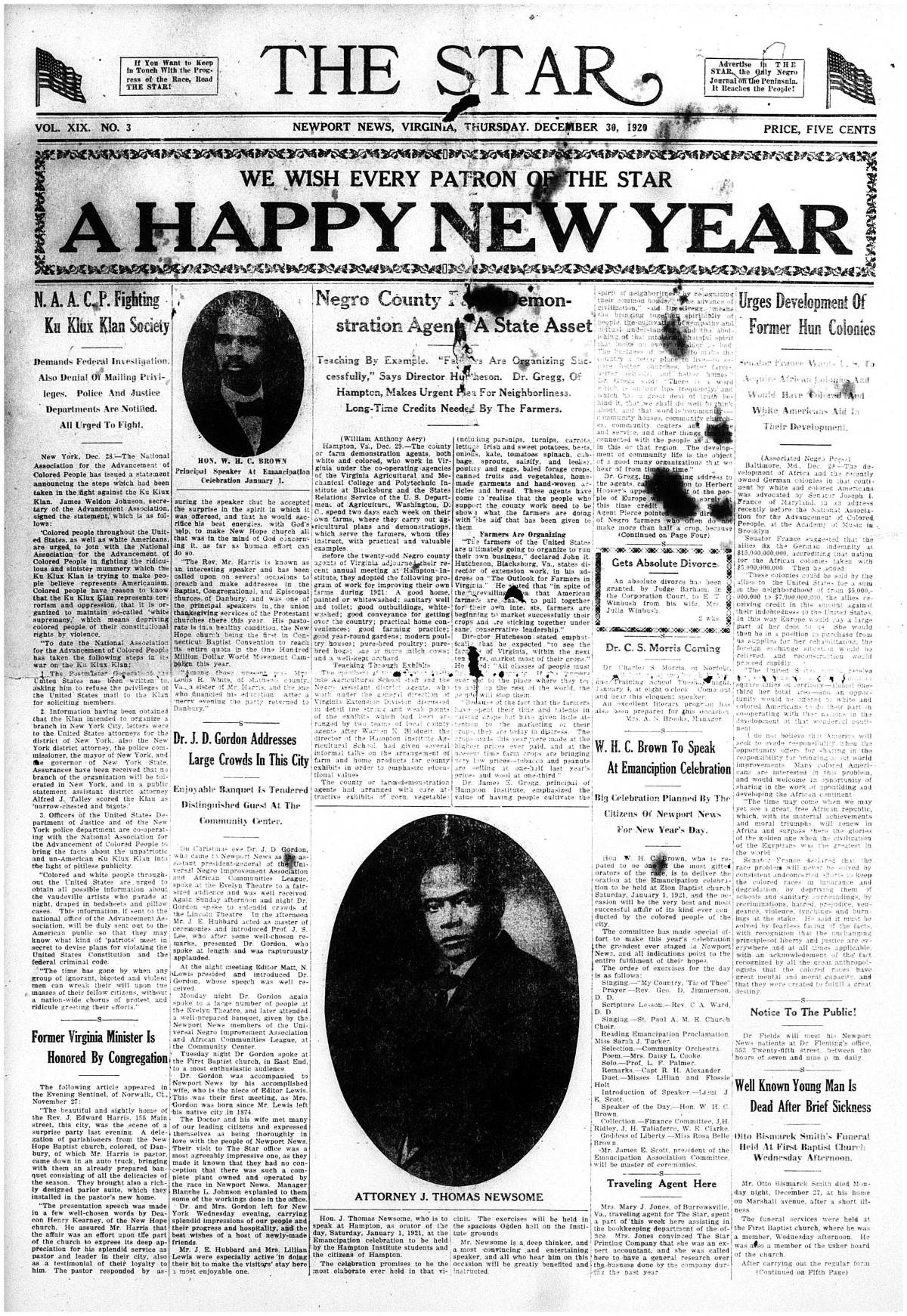 Issues of this black owned newspaper are regrettably rare.  The images above were derived from originals out of the Library of Virginia’s own archive.  Without the prospect of the appearance of more copies, there seemed little reason to delay filming.  The Star began in 1901, amending its title to The Newport News Star in the early 1920’s and published until 1940 when it merged into a branch of a larger black paper,  the Journal and Guide.  Twenty-eight copies scattered over this period have now been microfilmed. 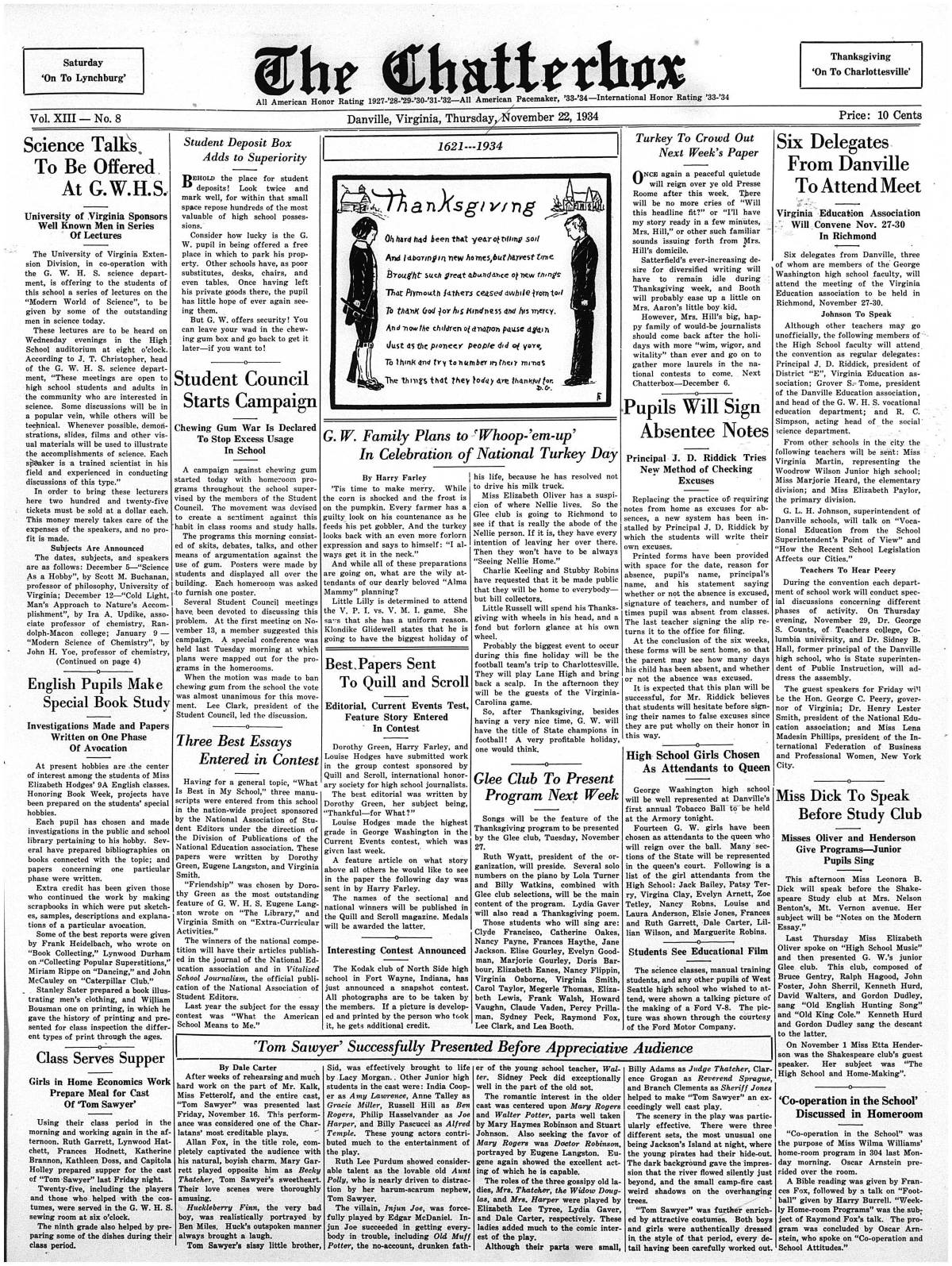 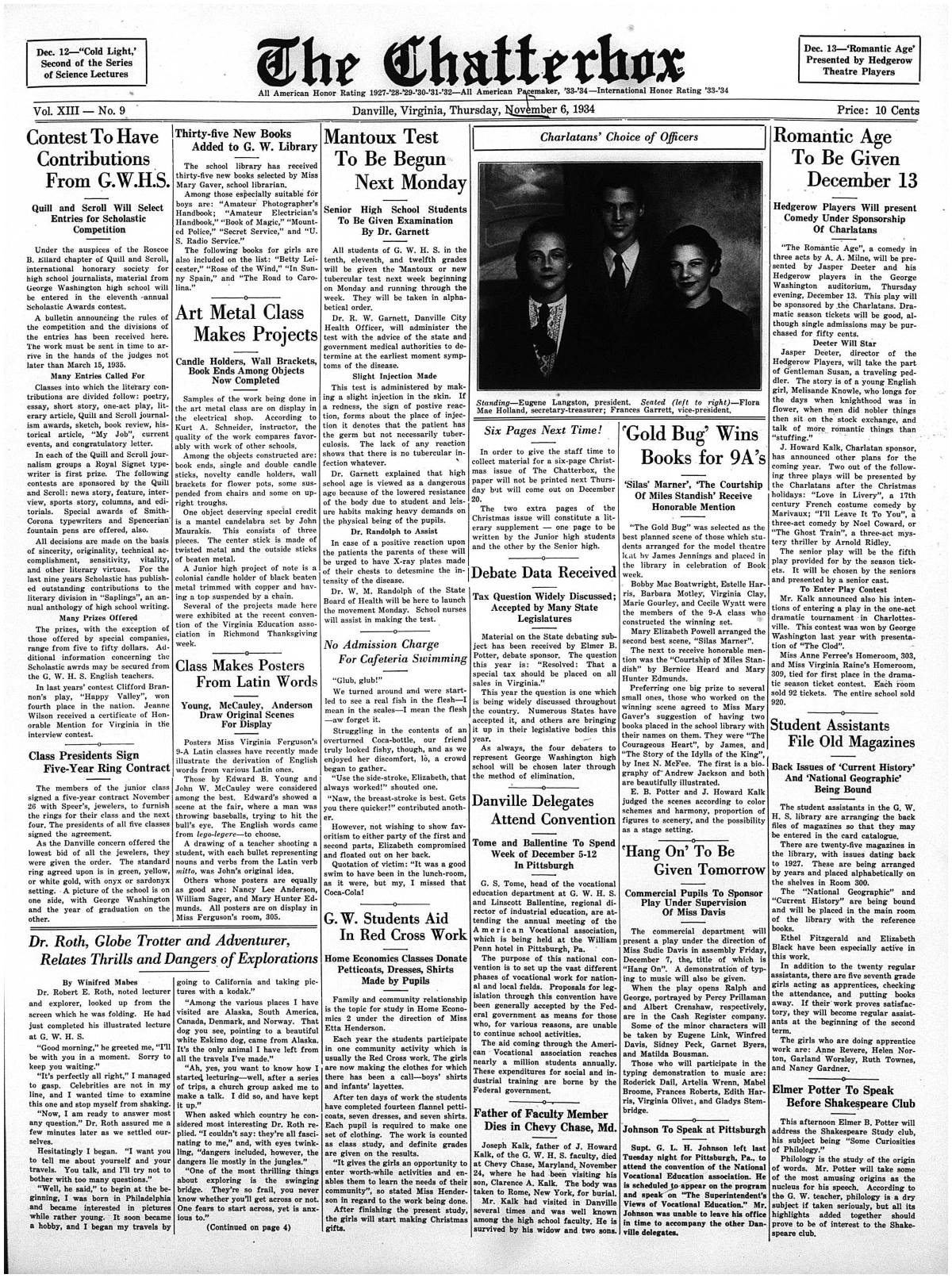 Regrets, as well, over the modest number of issues in our possession of this school paper produced by the students of George Washington High School in Danville.  We believe The Chatterbox began in 1922.  The Project filmed copies, a total of 23, from the school year 1934-35.  To these eyes they win the award for most mature and sophisticated layout by a Virginia student paper.  In fact the paper was acknowledged in a national contest.  “A mighty fine newspaper”, said one judge.  Note the NYTimesian font shift in the lower left of the first issue.   The paper convinces you it has plenty to chatter about.  On this same microfilm reel are some dozen issues each we filmed from two other Virginia high school papers-the Wythe Ledger of George Wythe High School of, yes, Wythe and the Leeword of Robert E. Lee High of Staunton.  The issues date from the 1960’s.  One article in the Leeword describes the library’s “new attraction, a microfilm projector”, adding that the film “will not wear out”.  This is true, at minimum for a few centuries.  Despite its age we’re still happy to boast of this format’s virtues while adding the reminder that it is the ideal platform, or ready room, for the launch into digitalization.  If budgetary weather cooperates, we hope the papers discussed here will find their way into this more modern realm and join those other historic newspapers already digitized by the Project.